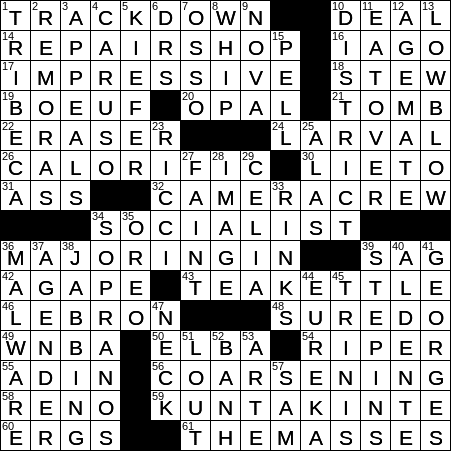 Constructed by: Joon Pahk & Erik Agard
Edited by: Will Shortz

20 A symbol of Australia : OPAL

The ass or donkey is mentioned several times in the Bible. One of the most-quoted biblical stories involving an ass is the story of Balaam. Balaam was a diviner who appears in the Book of Numbers in. In one account, Balaam is held to task by an angel for particularly cruel treatment of an ass.

46 James who is more than a little forward? : LEBRON

50 Island off the Tuscan coast : ELBA

Sparks is a city in Nevada that lies on the eastern side of Reno. The city was called Harriman originally, after a Southern Pacific Railroad president, and then renamed Sparks after a Nevada State Governor. The first non-Native American settlement in the area developed mainly from cattle trading. Cattle that were driven from Missouri and bound for California would stop in the area now known as Sparks, resting up before the arduous trek across the Sierra Nevada mountains. A business grew that involved trading cattle weary from the first part of the journey, swapping them for fresh animals. The tired beasts were then rested and fattened up to be traded again the following year for the journey on to California.

59 Role for which LeVar Burton was nominated for an Emmy : KUNTA KINTE

“TriBeCa” is a clever little acronym that expands into “TRI-angle BE-low CA-nal Street”. The name of the New York City neighborhood was developed by local residents who basically copied the naming technique used by residents of the adjacent area of SoHo, with “SoHo” being short for “SO-uth of HO-uston Street”.

10 What a representative represents : DISTRICT

Celia Cruz was born and bred in Cuba, but spent most of her working life in the United States, playing out her salsa singing career in New Jersey. Around the world, Cruz was known as the “Queen of Salsa”.

40 Having a little chewiness : AL DENTE

A Trini is someone the island of Trinidad, located off the coast of Venezuela.

The French introduced the baguette into Vietnam in the days the country was a French colony. Today, a single-serving baguette is known in Vietnam as “bánh mì” (meaning “wheat bread”). The term has been extended, particularly here in the US, to describe a Vietnamese sandwich.

Sam Houston was the first President of the Republic of Texas, a US Senator for Texas, and governor of the state. Houston was also Governor of Tennessee in his earlier life and is the only person in US history to have been governor of two different states. The city of Houston is named for Sam, and the nearby city of Huntsville boasts a statue of Houston that’s the largest freestanding statue of any American.