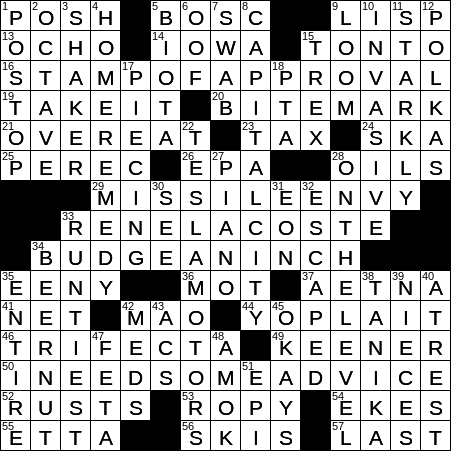 Drake University is a private school in Des Moines, Iowa. The school is named for co-founder Francis Marion Drake, who was a Civil War general and Governor of Iowa.

15 Classic TV character whose name is Spanish for “fool” : TONTO

21 What many Americans do on Thanksgiving : OVEREAT

Georges Perec was a French novelist. Perec’s most famous work is “La vie mode d’emploi”, or “Life: A User’s Manual”.

The 1980 law called the Comprehensive Environmental Response, Compensation, and Liability Act (CERCLA) is more usually referred to as “Superfund”. Superfund gives the Environmental Protection Agency (EPA) the authority to compel polluters to clean up contaminated sites.

I think that the reference is to ABC being a network (net).

44 Brand in the dairy aisle : YOPLAIT

Yoplait started out as a farmer’s cooperative in France. The company is the result of a 1965 merger between the cooperatives “Yola” and “Coplait”.

55 James in the Rock and Roll Hall of Fame : ETTA

56 What Denver’s airport has a special carousel for : SKIS

Denver International Airport is the largest-area airport in the whole country, with 54 square miles of land. Denver is a relatively new facility, replacing Stapleton International Airport in 1995. One of Denver’s runways is 16,000 feet long, making it the longest public runway in the US. The extra length is needed for take-off of jumbo jets in the thin summer air at the mile-high altitude.

57 Like Leo XIII among all popes named Leo : LAST

5 What a rain forest is rich in : BIOTA

The polka is a dance from central Europe, one that originated in Bohemia in the mid-1800s. It’s thought that “polka” comes from a Czech word meaning “little half”, reflecting the little half-steps included in the basic dance.

18 Org. in which Marge becomes involved in a classic 1995 episode of “The Simpsons” : PTA

The term “piano” on a musical score is direction to play “softly”.

47 Ingredient in a spanakopita pastry : FETA

Spanakopita is a savory pastry from Greece. The term “spanakopita” translates from Greek as “spinach pie”. The pie’s filling includes feta cheese, onions and egg, along with the spinach.