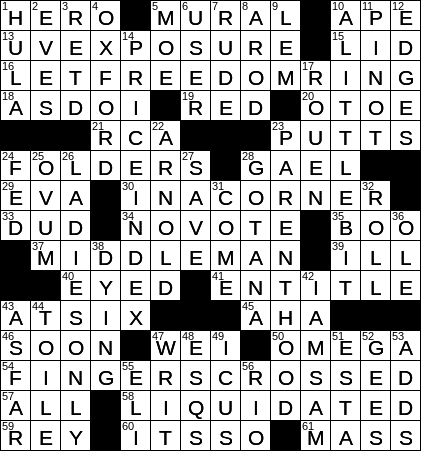 Themed answers include one word that is a type of FINGER. Those FINGERS CROSS in the grid:

1 Dance with a lot of hip movement : HULA

The University of Oxford is the oldest university in the English-speaking world. The exact date of the school’s founding is uncertain, although teaching was recorded there as early as 1096. Back in the early 1200s, the authorities from the town of Oxford hanged two Oxford University scholars following the death of a woman. There followed a dispute between the townsfolk and the university that resulted in many academics leaving Oxford. Many ended up in Cambridge, leading to the founding of the University of Cambridge in 1209. The two universities a similar status today, and are often referred to jointly as “Oxbridge”.

Irishman C. S. Lewis moved to Britain after serving in the British Army in WWI. A man of many achievements, Lewis is perhaps best remembered for his series of novels for children called “The Chronicles of Narnia” (which includes “The Lion, the Witch and the Wardrobe”). He also wrote the “The Four Loves”, a nonfiction work exploring the nature of love from a Christian perspective. Famously, Lewis died on November 22nd, 1963, the same day that President John F. Kennedy was assassinated.

17 City in which Joan of Arc died : ROUEN

23 2010s NBC drama that revolved around three generations of a family : PARENTHOOD

24 What banks look to when setting interest rates, with “the” : FED

The Kaiser roll was invented in Vienna, Austria. It is thought that the “Kaiser” name was applied to the crusty roll in honor of Austrian Emperor Franz Joseph I.

“I Am Sam” is a 2001 drama movie starring Sean Penn. Penn plays a man with a developmental disability who is raising a young daughter alone after her mother abandoned the family.

Actor Sean Penn is a two-time Oscar winner, for his roles in “Mystic River” released in 2003 and “Milk” released in 2008. Penn’s celebrity on screen is only matched with his fame off the screen. Apart from his “big name” marriages to singer Madonna and actress Robin Wright, Penn is also well known for political and social activism. He perhaps inherited some of his political views from his father, actor and director Leo Penn. As an actor, Leo refused to “name names” in front of the House Un-American Activities Committee and so was blacklisted in Hollywood and had to move into directing to put bread on the table. In later years as a director he gave his son Sean his first acting role, in a 1974 episode of “Little House on the Prairie”.

44 Fabric with a repeated design : TOILE

A writ of certiorari is an order by a superior court instructing a lower court to send the record in any particular case for review by the higher court.

56 Where Ipanema Beach is : RIO

Ipanema is a beach community in the south of Rio de Janeiro in Brazil. The name Ipanema is a local word meaning “bad water”, signifying that the shore is bad for fishing. The beach became famous on release of the song “The Girl from Ipanema” written in 1965.