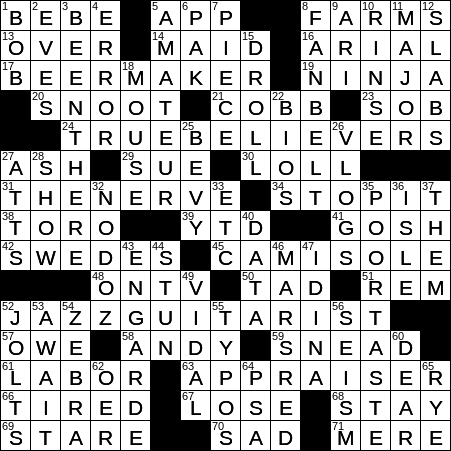 Today’s Theme (according to Bill): PRONOUNVERB

Themed clues look like simple words, but each can be parsed into a pronoun followed by a verb. It is this pronoun and verb that is the real clue. Very clever …

21 One of the first five inductees at Cooperstown : COBB

Ty Cobb’s first cousin, Robert H. Cobb, owned the Brown Derby chain of restaurants. One of his regular customers was the famous Sid Grauman, who ran Grauman’s Chinese Theater. Late one night, Grauman asked for a snack, and Cobb came up with a chopped salad simply made from ingredients he happened to have in the refrigerator. Grauman liked it so much that continued to request it, and the Cobb salad was born.

Cooperstown is a village in New York that is famous as the home to the Baseball Hall of Fame. The village was named for Judge William Cooper, the founder of Cooperstown and the father of the noted writer James Fenimore Cooper.

Toro is a manufacturer mainly of lawn mowers and snow removal equipment that is based in Bloomington, Minnesota. The company was founded in 1914 to build tractor engines.

42 Alfred Nobel and others : SWEDES

The fan belt on an engine transfers torque from the crankshaft to cooling fan.

“Quail” is a name used for several chicken-like wild birds. Quail are common prey for hunters.

32 Help for pulling an all-nighter : NODOZ

NoDoz and Vivarin are brand names of caffeine pills.

“En garde” is a French term that has been absorbed into the sport of fencing. Originally a warning “on guard!”, it is spoken at the start of an encounter to warn the fencers to take a defensive position.

The combining form “seismo-” means “earthquake”, and comes from “seismos”, the Greek for “earthquake”.