Constructed by: Hannah Slovut
Edited by: Will Shortz 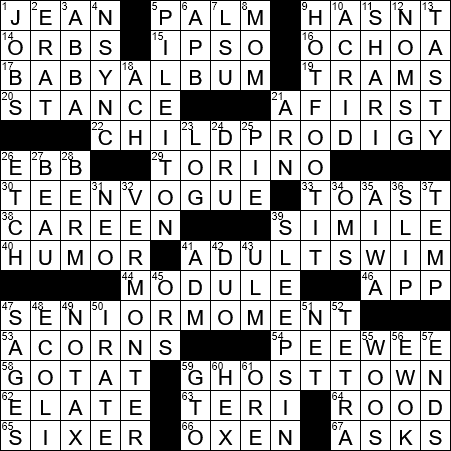 Today’s Theme (according to Bill): Baby … to Ghost!

The first words in today’s themed answers provide a “life” sequence, from BABY right through to GHOST!

A “wunderkind” is a child prodigy, especially in the musical arena. The term is German in origin and translates literally as “wonder child”.

Ford produced the Torino from 1968 to 1970. The name “Torino” is Italian for “Turin”, and a nod to the city that has been dubbed “the Italian Detroit”. Turin is home to auto manufacturers FIAT, Lancia and Alfa Romeo. Famously, the Ford Torino was used by the title characters in the seventies cop show “Starsky & Hutch”. Starsky’s Torino was red in color, with a large white vector stripe running along both sides. Ford cashed in on the popularity of the show by producing a thousand replicas of the “Starsky and Hutch” car, although they weren’t much more than the standard vehicle with a specialty paint job.

“Teen Vogue” is a version of “Vogue” magazine that targets teenage girls.

Pee-wee Herman is a comic character portrayed by Paul Reubens. Reubens introduced the character into his stage act, and from there to an HBO special that led to a 1985 movie “Pee-wee’s Big Adventure”. There followed a children’s TV series called “Pee-wee’s Playhouse” that ran from 1986 to 1991, and a 1988 movie “Big Top Pee-wee”.

A rood is a crucifix that specifically symbolizes the cross on which Jesus was crucified.

In many of the Christian traditions, a crucifix is a representation of Jesus on the cross. The term comes from the Latin “cruci fixus” meaning “fixed to a cross”.

The Philadelphia 76ers basketball team is one of the oldest franchises in the NBA. “The Sixers” were formed in 1946 as the Syracuse Nationals. The team moved to Philadelphia in 1963, and the name 76er was chosen in a fan contest, a name that honors the men who fought for the country’s independence in 1776.

1. Steve who once headed Apple : JOBS

Only three members of the quartet that made up the pop group ABBA were born in Sweden. Anni-Frid Lyngstad was born in Norway just after the end of WWII, the daughter of a Norwegian mother and a father who was German soldier and a member of the German occupying force during the war. The father returned to Germany with the army, and in 1947, Anna-Frid was taken with her family to Sweden. They left fearing reprisals against those who dealt with the German army during the occupation.

We have a big event across Europe every year called the Eurovision Song Contest. Each nation enters one song in competition with each other, and then voters across the whole continent decide on the winner. That’s how ABBA got their big break when they won in 1974 with “Waterloo”. In 1973, Spain’s entry was “Eres tú” (the Spanish for “You Are”) sung by the band Mocedades. “Eres tú” came second in the competition, but should have won in my humble opinion.

NSYNC was a boy band from Orlando, Florida that was formed in 1995. The name of the group came from a comment by the mother of band member Justin Timberlake, who said the boys voices sounded “in sync”. But, it’s also true that the letters of the name NSYNC are the last letters of the given names of the five band members:

Baton Rouge is the capital city of the state of Louisiana. The name “Baton Rouge” is French for “red stick” or “red staff”. The exact reason why such a name was given to the city isn’t really clear.

In the comic strip “Prince Valiant”, Arn is the eldest son of the title character, and Aleta is his wife. Edward, Duke of Windsor, once declared that “Prince Valiant” comic strip the “greatest contribution to English Literature in the past one hundred years”. I’m not so sure …

The term “berm” can be used to describe a physical barrier of some kind. For example, berms can be constructed along a highway to protect those living and working nearby from noise pollution.

32. Bernie Sanders, for one : VERMONTER

Bernie Sanders has served as US Senator from Vermont since 2007. Sanders describes himself as a democratic socialist, and used to appear on the ballot as an independent. Prior to joining the Democratic Party in 2015, Sanders had been the longest-serving independent in the history of the US Congress.

45. Where surgeons do surgery, for short : ORS

48. Bacterium that can help or hurt : E COLI

A damsel is a young woman, often referring to a lady of noble birth. The term came into English from the Old French “dameisele”, which had the same meaning. The modern French term is “demoiselle”, which in turn is related to the term of address “mademoiselle”.