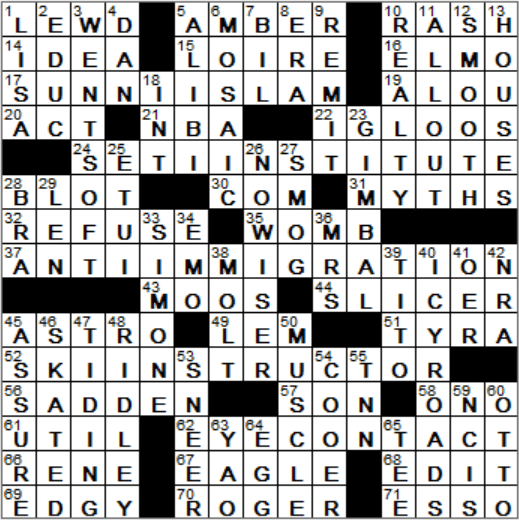 “SETI” is the name given to a number of projects that are searching for extraterrestrial life. The acronym stands for “search for extraterrestrial intelligence”. One of the main SETI activities is the monitoring of electromagnetic radiation (such as radio waves) reaching the Earth in the hope of finding a transmission from a civilization in another world.

“The Jetsons” is an animated show from Hanna-Barbera that had its first run in 1962-1963, and then was recreated in 1985-1987. When it was debuted in 1963 by ABC, “The Jetsons” was the network’s first ever color broadcast. “The Jetsons” are like a space-age version of “The Flintstones”. The four Jetson family members are George and Jane, the parents, and children Judy and Elroy. Residing with the family in Orbit City are Rosie the household robot and Astro the pet dog.

57. Partner of the Father and Holy Ghost : SON

The great French philosopher Rene Descartes made the famous statement in Latin, “Cogito ergo sum”. This translates into French as “Je pense, donc je suis” and into English as “I think, therefore I am”.

1. Crossword-solving girl on “The Simpsons” : LISA

Actor John Goodman will forever be remembered as Dan Conner, the on-screen husband of Roseanne Barr in the sitcom “Roseanne”. Goodman went to Missouri State University where he studied drama and was a compatriot of Kathleen Turner. The role that I most enjoyed played by Goodman was Speaker of the House Glen Allen Walken on the great show “The West Wing”. He also featured in the Amazon sitcom “Alpha House”, in another political role.

10. Property in buildings and land : REALTY

The terms “realty” and “real estate” date back to the later 1600s, and are derived from the earlier meaning “real possession”, something one owns that is tangible and real.

13. Purchases before hotels, in Monopoly : HOUSES

In the game of Monopoly, one can purchase a hotel by “demolishing” four houses and by paying an extra amount equal to the price of a house.

A gimbal is a pivoted support, usually in the shape of a ring. The supported item is located in the center of the ring. One gimbal allows the supported item to tilt freely around one axis. By using two gimbals, one inside the other, the item can tilt freely in two directions. A ship’s compass is often housed within three gimbals. The two gimbals tend to isolate the compass from the movement of the ship in all three axes.

Len Goodman is a professional ballroom dancer. Goodman is the head judge on the US’s “Dancing with the Stars”, and was head judge until 2017 on the original UK version of the show called “Strictly Come Dancing”.

The Jackson 5 singing group was originally made up of brothers Tito, Jackie, Jermaine, Marlon and Michael. The four eldest brothers are still performing, but now using the name “The Jacksons”.

Rey is a central character in the “Star Wars” universe. She first appeared in 2015’s “Star Wars: The Force Awakens”. Rey is played by British actress Daisy Ridley.

Spike TV is a 2003 relaunch of The Nashville Network (TNN) and was marketed as the first television channel for men. The station owners ran into trouble though as the director Spike Lee sued, claiming that viewers would assume he was associated with the channel because of the use of “Spike”. The suit was settled when Lee concluded that there was no intention to trade on his name.

63. Ming worth millions of dollars : YAO