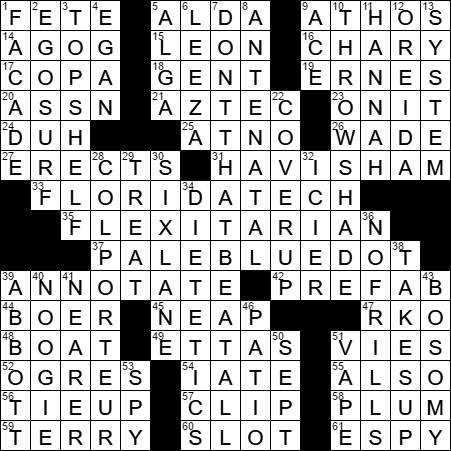 Today’s Wiki-est, Amazonian Googlies
Across
5. “The Aviator” actor, 2004 : ALDA
Alan Alda has had a great television career, especially of course on “M*A*S*H”. Alda won his first Emmy in 1972, for playing Hawkeye Pierce on “M*A*S*H”. He won his most recent Emmy in 2006 for his portrayal of Presidential candidate Arnold Vinick in “The West Wing”. When it comes to the big screen, my favorite of Alda’s movies is the 1978 romantic comedy “Same Time, Next Year” in which he starred opposite Ellen Burstyn.

“The Aviator” is a great 2004 film, a biographical piece about much of the life of aviation pioneer Howard Hughes. Leonardo DiCaprio plays the title role, with Cate Blanchett playing a very credible Katharine Hepburn, Hughes’ lover with whom he lived for quite some time. Blanchett won a very much deserved Oscar for Best Supporting Actress for her performance. Alan Alda received an Oscar nomination as a supporting actor, playing Senator Owen Brewster, a thorn in the side for Howard Hughes.

9. Fictional swordsman : ATHOS
Alexandre Dumas’ “Three Musketeers” are Athos, Porthos and Aramis, although the hero of the novel is their young protégé is D’Artagnan. A musketeer was an infantry soldier who was equipped with a musket. Funnily enough, the three “musketeers” really don’t use their muskets, and are better known for prowess with their swords.

15. Province of NW Spain : LEON
León is a province in the autonomous community of Castile and León in the northwest of Spain. The province’s capital is the city of León, which was founded as Roman military encampment around 29 BC.

16. Word that’s its own synonym when its first two letters are replaced with “w” : CHARY
To be “chary” is to be hesitant, unwilling to proceed. To be “wary” is the same thing.

17. “At the ___” (subtitle of a 1978 hit) : COPA
The Copacabana of the 1978 Barry Manilow song is the Copacabana nightclub in New York City (which is also the subject of the Frank Sinatra song “Meet Me at the Copa”). The Copa opened in 1940 and is still going today although it is struggling. The club had to move due to impending construction and is now “sharing” a location with the Columbus 72 nightclub.

Her name was Lola, she was a showgirl
With yellow feathers in her hair and a dress cut down to there
She would merengue and do the cha-cha
And while she tried to be a star
Tony always tended bar
Across the crowded floor, they worked from 8 til 4
They were young and they had each other
Who could ask for more?

25. Md or Rn fig. : AT NO
Dmitri Mendeleev was a Russian chemist. When Mendeleev classified elements according to their chemical properties, he noticed patterns and was able to group elements into his famous 1869 Periodic Table. So powerful was his table that he actually predicted the properties of some elements that had not even been discovered in 1869. Element number 101 is mendelevium (Md) and was named after Mendeleev.

Radon (Rn) is a radioactive gas, a byproduct produced when uranium decays naturally in the earth. Radon gas can collect and accumulate in buildings and rooms that are particularly well insulated with very little air exchange. The danger is very real, as radon is listed as the second most frequent cause of lung cancer after cigarette smoke.

26. Notable 1973 defendant : WADE
Roe v. Wade was decided in a US District Court in Texas in 1970, and reached the Supreme Court on appeal. The basic decision by the Supreme Court was that a woman’s constitutional right to privacy applied to an abortion, but that this right had to be balanced with a state’s interest in protecting an unborn child and a mother’s health. The Court further defined that the state’s interest became stronger with each trimester of a pregnancy. So, in the first trimester the woman’s right to privacy outweighed any state interest. In the second trimester the state’s interest in maternal health was deemed to be strong enough to allow state regulation of abortion for the sake of the mother. In the third trimester the viability of the fetus dictated that the state’s interest in the unborn child came into play, so states could regulate or prohibit abortions, except in cases where the mother’s life was in danger. I’m no lawyer, but that’s my understanding of the initial Supreme Court decision …

31. Dickens character “with a dead lull about her” : HAVISHAM
Miss Havisham is a character in “Great Expectations”, the novel by Charles Dickens. Miss Havisham is a wealthy spinster who as a younger woman fell in love with a man named Compeyson. Sadly, Compeyson was a swindler after her riches who defrauded her and left her at the altar.

35. Occasional meat eater : FLEXITARIAN
A flexitarian is a semi-vegetarian, someone whose diet is largely plant-based but who occasionally eats meat.

37. Carl Sagan’s sequel to “Cosmos” : PALE BLUE DOT
“Pale Blue Dot” is a book about the cosmos by Carl Sagan. The title of the book is taken from the famous “Pale Blue Dot” photograph taken by the Voyager 1 spacecraft from almost 4 million miles from the Earth. In the photo, our planet appears as a tiny “pale blue dot”. NASA had Voyager 1 take the photograph, at the request of Carl Sagan.

44. Great Trek figure of the 1830s : BOER
“Boer” is the Dutch and Afrikaans word for “farmer”, a word that was used to describe the Dutch-speaking people who settled parts of South Africa during the 1700s.

47. Company behind Hitchcock’s “Notorious” : RKO
The RKO Pictures studio was formed when RCA (RADIO Corporation of America) bought the KEITH-Albee-ORPHEUM theaters (and Joe Kennedy’s Film Booking Offices of America). The RKO initialism then comes from the words “Radio”, “Keith” and “Orpheum”.

“Notorious” is an interesting Hitchcock film made in 1946 starring Cary Grant and Ingrid Bergman. I find it interesting as it is such a different dramatic role for Cary Grant, and a more gritty role for the lovely Ingrid Bergman, and the great Claude Rains is in there for good measure. It’s a story of espionage, love and intrigue set in Rio de Janeiro where there is a group of German Nazis hiding out after WWII. Definitely worth a rental if you’ve never seen it …

49. James and Jones of jazz : ETTAS
Etta James was best known for her beautiful rendition of the song “At Last”. Sadly, as she disclosed in her autobiography, James lived a life that was ravaged by drug addiction leading to numerous legal and health problems. Ms. James passed away in January 2012 having suffered from leukemia.

54. “___ it up and spit it out” (“My Way” lyric) : I ATE
The song “My Way” has lyrics that were written by Paul Anka in 1969, but the tune itself was composed two years earlier by Claude François and Jacques Revaux. The song had been released with completely different lyrics in France as “Comme d’habitude” (“As Usual”). When Anka heard the song on television in Paris he sought out and obtained the rights to use it himself, for free. Supposedly, “Comme d’habitude” has been recorded in more languages, by more artists, than any other song in the contemporary repertoire.

And now, the end is near
And so I face the final curtain
My friend, I’ll say it clear
I’ll state my case, of which I’m certain
I’ve lived a life that’s full
I traveled each and every highway
And more, much more than this, I did it my way

57. Trailer segment : CLIP
The term “trailer” was originally used in the film industry to describe advertisements for upcoming features. These trailers were originally shown at the end of a movie being screened, hence the name. This practise quickly fell out of favor as theater patrons usually left at the end of the movie without paying much attention to the trailers. So, the trailers were moved to the beginning of the show, but the term “trailer” persisted.

58. Color close to puce : PLUM
The name of the purple shade known as “puce” has a strange derivation. “Puce” came into English from French, in which language “puce” means “flea”. Supposedly, puce is the color of a flea!

59. Like many towels : TERRY
Terry cloth is a fabric designed to absorb lots of liquid. The fabric has relatively large loops of thread that improve the absorption properties. The larger the loop, the more thread, the better the absorption.

61. Play award? : ESPY
The ESPY Awards are a creation of the ESPN sports television network. One difference with similarly named awards in the entertainment industry is that ESPY winners are chosen solely based on viewer votes.

Down
2. See how many hits you get, say : EGOSURF
We’ve all done it, googling our own names to see what comes up. It’s called “egosurfing”.

6. 1994-2000 TV talk show : LEEZA
Leeza Gibbons has her own radio show called “Hollywood Confidential”, and used to have her own talk show on NBC television that aired from 1994 to 2000. Gibbons is the founder of a nonprofit group called Leeza’s Place which supports people giving care to patients with memory disorders. Since 2007 she has been a board member of California’s stem cell research agency, appointed by Governor Arnold Schwarzenegger.

11. “Girls” girl played by Lena Dunham : HANNAH
Lena Dunham is a co-star in the HBO series “Girls”, and is also the show’s creator. Dunham garnered a lot of attention for herself during the 2012 US Presidential election cycle as she starred in an ad focused on getting out the youth vote. In the spot she compared voting for the first time with having sex for the first time.

12. Portmanteau in the frozen food aisle : ORE-IDA
Ore-Ida frozen foods are all made using potatoes. The company is located in Oregon, just across the border from Idaho. “Ore-Ida” is a melding of the two state names.

40. Knuckle-headed antic? : NOOGIE
A “noogie” is that childish move where someone rubs his (and it’s always a guy!) knuckles into a person’s head to create a little soreness.

43. Like centerfolds, typically : BOSOMY
In the magazine world, a centerfold is large illustration that is folded to form the central spread of a publication. Famously, Hugh Hefner used the centerfold of “Playboy” magazine for a large color photograph of a nude model, and since then the term “centerfold” has been used for a model who has featured in such a layout. Playboy’s first centerfold model was Marilyn Monroe.