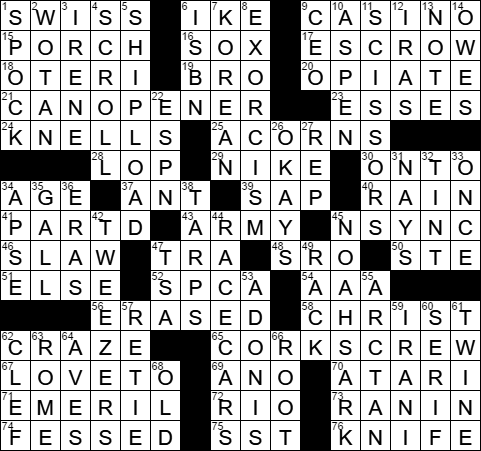 Today’s Wiki-est, Amazonian Googlies
Across
1. With 43- and 76-Across, camping aid : SWISS …
43. See 1-Across : … ARMY …
76. See 1-Across : … KNIFE
Swiss Army knives are multi-tools made by the Swiss company Victorinox. The device was first produced in 1891 when Victorinox’s predecessor company was awarded the contract to supply the knife to the Swiss Army. The name “Swiss Army knife” was actually an American invention as it was the term used by American GIs during and after WWII as an alternative to pronouncing the more difficult German “Schweizer Offiziersmesser” (Swiss Officer Knife).

6. 1950s prez : IKE
When the future president was growing up, the Eisenhowers used the nickname “Ike” for all seven boys in the family, as “Ike” was seen as an abbreviation for the family name. “Big Ike” was Edgar, the second oldest boy. “Little/Young Ike” was Dwight, who was the third son born. Dwight had no sisters.

9. Place to play the slots : CASINO
The “casino” originated in the 1700s, first describing a public room for music or dancing. The name “casino” is a diminutive of “casa” meaning “house”.

16. They’re “Red” in Boston and “White” in Chicago : SOX
The Boston Red Sox is one of the most successful Major League Baseball teams and so commands a large attendance, but only when on the road. The relatively small capacity of Boston’s Fenway Park, the team’s home since 1912, has dictated that every game the Red Sox has played there has been a sell out since May of 2003.

17. Third-party account : ESCROW
One type of escrow account is held by a trusted third party for two parties who have some contractual arrangement, an arrangement that is often in dispute. The third party only releases the funds when both parties have fulfilled their contractual obligations.

18. “S.N.L.” alum Cheri : OTERI
Cheri Oteri was the SNL (“Saturday Night Live”) cast member who regularly appeared with Will Ferrell in the skit featuring a pair of Spartan cheerleaders.

20. Heroin or Vicodin : OPIATE
The commercialization of the drug heroin was led by the Bayer pharmaceutical company in Germany. The drug had been re-discovered in Bayer’s labs, and was named by the company’s head of research “heroin” from the German “heroisch” meaning “heroic, strong”. This was a reference to the perceived “heroic” effects on the user. Bayer lost the trademark rights to heroin (along with their “aspirin”) as part of WWI reparations.

24. Mournful bell sounds : KNELLS
The word “knell” is used for a solemn ring from a bell, often associated with death or a funeral. “Knell” comes the Old English “cnell” and is probably imitative in origin, sounding like a peal from a large bell.

46. Cole ___ (side dish) : SLAW
The term “coleslaw” is an Anglicized version of the Dutch name “koolsla”, which in itself is a shortened form of “Koolsalade” meaning “cabbage salad”.

50. Sault ___ Marie, Mich. : STE
Sault Ste. Marie is the name of two cities on either side of the Canada-US border, one in Ontario and the other in Michigan. The two cities were originally one settlement in the 17th century, established by Jesuit Missionaries. The missionaries gave the settlement the name “Sault Sainte Marie”, which can be translated as “Saint Mary’s Falls”. The city was one community until 1817, when a US-UK Joint Boundary Commission set the border along the St. Mary’s River.

52. Org. advocating pet adoption : SPCA
Unlike most developed countries, the US has no “umbrella” organization with the goal of preventing cruelty to animals. Instead there are independent organizations set up all over the nation using the name SPCA. Having said that, there is an organization called the American Society for the Prevention of Cruelty to Animals (ASPCA) that was originally intended to operate across the country, but really it now focuses its efforts in New York City.

69. 12 months, in Tijuana : ANO
Tijuana is the largest city in the Mexican state of Baja California, and lies just across the US-Mexico border from San Diego. Tijuana is also the most westerly of all Mexican cities. A lot of Tijuana’s growth took place in the twenties as tourists flocked south of the border during the days of prohibition in the US. One of the many casinos and hotels that flourished at that time was Hotel Caesar’s in the Avenida Revolución area. Hotel Caesar’s claims to be the birthplace of the now ubiquitous Caesar Salad.

70. Pong game maker : ATARI
Do you remember the arcade video game that was like a game of tennis, with paddles moving up and down to hit what looked like a ball, over what looked like a net? Well, that was Pong. The arcade version of Pong was introduced in 1972, with Atari selling a home version through Sears for the Christmas market in 1975.

72. ___ de Janeiro : RIO
Rio de Janeiro is the second largest city in Brazil (after São Paulo). “Rio de Janeiro” translates as “January River”. The name reflects the discovery of the bay on which Rio sits, on New Year’s Day in 1502.

74. Came clean, with “up” : FESSED
The term “fess” is most often seen as part of the phrasal verb “to fess up” meaning “to admit to something”. “Fess” is simply a shortened form of “confess”.

75. Concorde, for short : SST
The most famous supersonic transport (SST) is the retired Concorde. Concorde was developed and produced under an Anglo-French treaty by France’s Aérospatiale and the UK’s British Aircraft Corporation (BAC). Concordes were mainly operated by Air France and British Airways, with both companies buying the planes with substantial subsidies from the French and British governments. The final Concorde flight was a British Airways plane that landed in the UK on 26 November 2003.

Down
1. “Mr.” on the Enterprise : SPOCK
Leonard Nimoy played the logical Mr. Spock in the original “Star Trek” television series. Spock has to be the most popular character on the show, and he keeps popping up in “Star Trek” spin offs to this day. Nimoy first worked alongside William Shatner (Captain Kirk) in an episode of “The Man from U.N.C.L.E.” (I loved that show!), with Nimoy playing a bad guy and Shatner playing an U.N.C.L.E. recruit.

2. King of the gods in Wagner’s “Ring” cycle : WOTAN
“Wotan” is an alternative (High German) spelling of the name Woden, the Anglo-Saxon version of the Norse god Odin. Wotan is the head god in the pagan tradition, but as paganism was gradually replaced by Christianity in the 7th and 8th centuries, Wotan moved from his place in religion and into the realm of folklore. Indeed, he is a precursor of our modern day Father Christmas. Wotan (Woden) also gave his name to Wednesday, Woden’s Day …

3. Memorable 2011 hurricane : IRENE
Hurricane Irene caused extensive flooding in 2011 as it traveled through the Caribbean, up the East Coast of the United States and into the Atlantic seaboard of Canada. The hurricane was unusual in that it came so far up north. Fifty-five deaths were attributed to Irene.

4. Form of a papyrus document : SCROLL
The papyrus plant was commonly found in the Nile Delta of Europe. The pith of the plant was used to make a thick, paper-like material on which one could write. This writing material, which became known as papyrus (plural “papyri”), became a competitor for the most popular writing surface of the day known as parchment, which was made from animal skins.

6. Library ID : ISBN
The International Standard Book Number (ISBN) was invented by one Gordon Foster who is now a professor at Trinity College Dublin in Ireland. The code was originally developed for booksellers, so that they had a unique number (and now a barcode) for each publication.

7. Cuisine with kimchi : KOREAN
Kimchi is a traditional dish from Korea. The original kimchi is made from fermented vegetables, and is pretty strong stuff …

8. Casting out of a demon : EXORCISM
An exorcist is a religious figure who is believed to be able to cast out demons that have possessed a person or perhaps a building.

10. “Quaking” tree : ASPEN
The “quaking” aspen tree is so called because the structure of the leaves causes them to move easily in the wind, to “tremble, quake”.

34. Altar area : APSE
The apse of a church or cathedral is a semicircular recess in an outer wall, usually with a half-dome as a roof and often where there resides an altar. Originally, apses were used as burial places for the clergy and also for storage of important relics.

35. Chutzpah : GALL
Our word “chutzpah” meaning “nerve, gall, impudence” is derived from the Yiddish “khutspe”, which has the same meaning.

38. Coverings pulled across infields : TARPS
Originally, tarpaulins were made from canvas covered in tar that rendered the material waterproof. The word “tarpaulin” comes from “tar” and “palling”, with “pall” meaning “heavy cloth covering”.

45. Refuge during the Great Flood : NOAH’S ARK
The term “ark”, when used with reference to Noah, is a translation of the Hebrew word “tebah”. The word “tebah” is also used in the Bible for the basket in which Moses was placed by his mother when she floated him down the Nile. It seems that the word “tebah” doesn’t mean “boat” and nor does it mean “basket”. Rather, a more appropriate translation is “life-preserver” or “life-saver”. So, Noah’s ark was Noah’s life-preserver during the flood.

47. Airport screening org. : TSA
The Transportation Security Administration (TSA) is the agency that employs the good folks that check passengers and baggage at airports.

53. Handsome man : ADONIS
In Greek mythology, Adonis is a beautiful young god loved by Aphrodite. Adonis dies in a hunting accident (gored by a boar), but not before he gives Aphrodite a child. Adonis was originally a Phoenician god “absorbed” into Greek lore (Phoenicia is modern day Lebanon). The child born of Adonis to Aphrodite was called Beroe, after which is named Beirut, the capital city of Lebanon. We also use the term “adonis” to mean “beautiful male”.

59. Tehran native : IRANI
Tehran is the capital of Iran and is the largest city in the Middle East, with a population of about 8.5 million. Iran has been around a really long time and Tehran is actually the country’s 31st national capital.

60. Feature lacked by Helvetica type : SERIF
Serifs are details on the ends of characters in some typefaces. Typefaces without serifs are known as sans-serif, using the French word “sans” meaning “without” and “serif” from the Dutch “schreef” meaning “line”. Some people say that serif fonts are easier to read on paper, whereas sans-serif fonts work better on a computer screen. I’m not so sure though …

61. Bale binder : TWINE
Our word “twine”, meaning a light string, has the same root as our word “twin”. The original Old English “twin” was a double thread.

62. Word after bass or treble : CLEF
“Clef” is the French word for “key”. In music, a clef is used to indicate the pitch of the notes written on the stave. The bass clef is also known as the F-clef, the alto clef is the C-clef, and the treble clef is the G-clef.

63. Where all roads lead, it’s said : ROME
The expression “all roads lead to Rome” is used to mean “whatever way we do this, we’ll get the same result”. The phrase has been used since the 1100s and probably even earlier than that. The expression arises because the ancient Roman road system had all major roads radiating from Rome like spokes on a wheel.