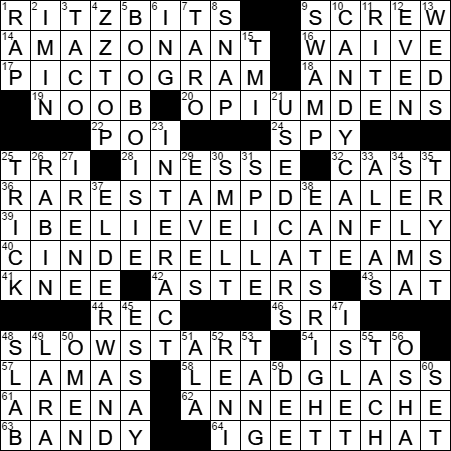 Today’s Wiki-est, Amazonian Googlies
Across
1. Tiny cheese sandwiches, of a sort : RITZ BITS
Ritz Bits are sandwiches made from two Ritz crackers and a filling.

14. Nest-raiding insect : AMAZON ANT
Amazon ants are referred to as “slave-raiding” ants. They rob the pupae from related species and use the captured ants as “slaves”. The “slaves” do virtually all the work needed to maintain the Amazon ant nest, including provision of food and nursing the young.

20. Places frequented by Dorian Gray : OPIUM DENS
“The Picture of Dorian Gray” is a novel by Oscar Wilde, in fact Wilde’s only novel. In the story, the title character is a young man appearing in a painting. Jokingly, Dorian sells his soul to the devil so that the painting would age rather than he.

22. Dish made from 7-Down : POI
(7D. Ingredient in 22-Across : TARO)
The corm of some taro plants is used to make poi, the traditional Hawaiian dish (that I think tastes horrible). When a taro plant is grown as an ornamental, it is often called Elephant Ears due to the shape of its large leaves.

25. Ironman race, briefly : TRI
An Ironman Triathlon is a race involving a 2.4 mile swim, a 112 mile bike ride, and a marathon run of just over 26 miles. The idea for the race came out of a debate between some runners in the 1977 Oahu Perimeter Relay. They were questioning whether runners, swimmers or bikers were the most fit athletes. The debaters decided to combine three local events to determine the answer, inviting athletes from all three disciplines. The events that were mimicked to come up with the first triathlon were the Waikiki Roughwater swim (2.4 miles), the Around-Oahu Bike Race (115 miles) and the Honolulu Marathon (26.2 miles). The idea was that whoever finished first would be called “the Iron Man”. The first triathlon was run in 1978, with fifteen starters and only twelve finishers. The race format is used all over the world now, but the Hawaiian Ironman is the event that everyone wants to win.

28. Existing : IN ESSE
The Latin term “in esse” is used to mean “actually existing”, and translates as “in being”.

R. Kelly is the stage name of R&B singer Robert Kelly from Chicago. R. Kelly was named by “Billboard” as the most successful R&B singer in the past 25 years, and so I guess he has earned his nickname “King of R&B”. Kelly ran into some problems in the press when it was revealed that he had married singer Aaliyah when she was just 15 and Kelly was 27-years-old.

42. Flowers named after the Greek word for “star” : ASTERS
Apparently, most aster species and cultivars bloom relatively late in the year, usually in the fall. The name “aster” comes into English via Latin from the Greek word “astéri” meaning “star”, a reference to the arrangement of the petals of the flower.

Karma is religious concept with its basis in Indian faiths. Karma embraces the notion of cause and effect. Good deeds have good consequences at some later point in one’s life, future life, or afterlife and vice versa.

62. “Wag the Dog” co-star, 1997 : ANNE HECHE
My favorite movie starring the actress Anne Heche is “Six Days Seven Nights”, a romantic comedy in which she plays opposite Harrison Ford. Heche is noted for her difficult private life. She wrote that her father had molested her as a child and gave her a sexually transmitted disease (he later revealed that he was homosexual, and died of AIDS). Heche dated comedian Steve Martin for two years, and then lived with comedian Ellen DeGeneres for three. Soon after breaking up with DeGeneres, she started exhibiting eccentric behavior for a while, claiming that she was the daughter of God, and that she would take everyone back to heaven in her spaceship. Happily, I think things have calmed down for her in recent years.

The 1997 movie “Wag the Dog” is a black comedy starring Dustin Hoffman and Robert De Niro. It tells the story of a fake war that is manufactured by a Washington spin doctor in order to distract the American electorate. It is based on the novel “American Hero” by Larry Beinhart. In the movie the war is fictitious and the president goes unnamed. In the novel, Beinhart uses Desert Storm as the war in his storyline, and George H. W. Bush as the President.

Down
4. Band with the gold-certified albums “Tres Hombres” and “El Loco” : ZZ TOP
In the blues rock band ZZ Top, the hairy guitar players are Billy F. Gibbons and Dusty Hill. The relatively clean-shaven drummer is, wait for it … Frank Beard.

5. Ignorant middle class, per H. L. Mencken : BOOBOISIE
H. L. Mencken was a journalist and essayist from Baltimore. Mencken reported on the Scopes trial of 1925 and was the writer who dubbed it the “Monkey Trial”.

6. Fortune Global 500 bank : ING
ING is a huge Dutch banking institution created via a merger in 1991. The company headquarters is in a spectacular building in Amsterdam called simply ING House. ING stands for Internationale Nederlanden Groep.

10. Christmas decoration : CANDY CANE
Apparently, candy canes were created at the behest of the choirmaster at Cologne Cathedral in Germany in 1672. The sweet sticks were basically used as bribes to keep children quiet during services. The choirmaster specified that the candy sticks should have a crook at the top so that they reminded the children of the three shepherds who visited the infant Jesus just after his birth.

11. Quinceañera, for 15-year-old girls : RITE
Quinceañera is a celebration of a girl’s fifteenth birthday, an event common in many parts of Latin America.

26. 1994 Peace Prize sharer : RABIN
Yitzhak Rabin was the fifth Prime Minister of Israel, and the first Prime Minister to have been born in the relatively young state of Israel. Rabin was a signatory of the Oslo Accords in 1993, along with PLO Chairman Yasser Arafat, and US President Bill Clinton. Sadly, this led to his death as he was assassinated two years later by a right-wing radical who opposed the Accords.

27. Woman’s name meaning “peace” : IRENE
Eirene (also “Irene”) was the Greek goddess of peace, with “eirene” being the Greek word for “peace”. The Roman equivalent to Eirene was the goddess Pax.

30. Rid of impurities : SMELT
Metals are found in ore in the form of oxides. In order to get pure metal from the ore, the ore is heated and the metal oxides within are reduced (i.e. the oxygen is removed) in the chemical process known as smelting. The oxygen is extracted by adding a source of carbon or carbon monoxide which uses up the excess oxygen atoms to make carbon dioxide, a waste product of smelting (and, a greenhouse gas).

33. Some sporty Italian wheels : ALFAS
The “Alfa” in Alfa Romeo is actually an acronym, standing for Anonima Lombarda Fabbrica Automobili (“Lombard Automobile Factory, Public Company”). ALFA was an enterprise founded in 1909 and which was taken over by Nicola Romeo in 1915. In 1920 the company name was changed to Alfa Romeo.

34. “The Simpsons” aunt : SELMA
In “The Simpsons”, Marge Simpson has two older twin sisters. Their full names are Patricia “Patty” Bouvier and Selma Bouvier-Terwilliger-Hutz-McClure-Stu-Simpson. Selma acquired that multiple-barreled name through a string of unsuccessful marriages.

35. Meeting on the DL : TRYST
In its most general sense, a tryst is a meeting at an agreed time and place. More usually we consider a tryst to be a prearranged meeting between lovers. The term comes from the Old French “triste”, a waiting place designated when hunting. Further, a tryst taking place at lunchtime is sometimes referred to as a nooner.

37. Powerful tool for Dumbledore : ELDER WAND
Professor Albus Dumbledore is the headmaster of the school for wizards called Hogwarts, in the Harry Potter universe. Dumbledore’s specialties are nonverbal spells and alchemy. Author J. K. Rowling chose the name Dumbledore as it is an Early English word for a bumblebee. Apparently she pictured him wandering around, humming to himself.

52. Baroque artist Guido : RENI
Guido Reni was an Italian painter from Bologna who was active in the first half of the 17th century. Reni’s most famous work is probably “Crucifixion of St. Peter”, an altarpiece commissioned in the early 1600s that is now on display in the Vatican.

55. Instrument with a needle, for short : TACH
The tachometer takes its name from the Greek word “tachos” meaning “speed”. A tachometer measures engine revolutions per minute (rpm).

56. Plant watcher, for short : OSHA
The Occupational Safety and Health Administration (OSHA) was created in 1970 during the Nixon administration. OSHA regulates workplaces in the private sector and regulates just one government agency, namely the US Postal Service.