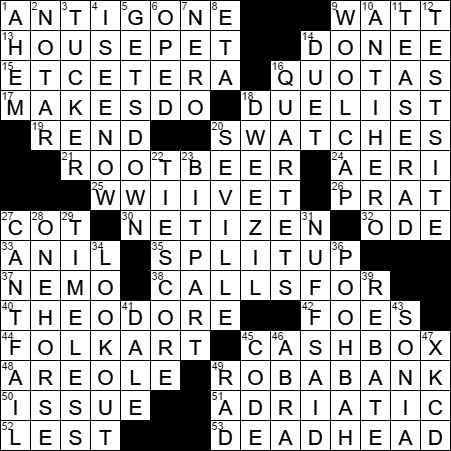 Today’s Wiki-est, Amazonian Googlies
Across
1. Subject of plays by Sophocles, Euripides and Cocteau : ANTIGONE
“Antigone” is a tragedy written by Greek playwright Sophocles and first performed in 442 BC. Antigone is the daughter of King Oedipus of Thebes, born out of the incestuous relationship with his mother Jocasta.

9. Inventor with three steam engine patents : WATT
James Watt was a Scottish inventor, a man who figured prominently in the Industrial Revolution in Britain largely due to the improvements he made to the fledgling steam engine. The SI unit of power is called the watt, named in his honor.

21. Hires for a float? : ROOT BEER
Hires Root Beer was introduced way back in 1876, making it the longest continuously-made soft drink in the country. The basic formulation was developed by Philadelphia pharmacist Charles Elmer Hires.

25. One who might recall action on Iwo : WWII VET
Iwo Jima is a volcanic island located south of Tokyo that today is uninhabited. The name is Japanese for “Sulfur Island”, referring to the sulfur mining on which Iwo Jima’s economy once depended. There were about a thousand Japanese civilians living on the island prior to WWII. In 1944, there was a massive influx of Japanese military personnel in anticipation of the inevitable US invasion. As the Japanese military moved in, the civilians were forced out and no one has lived there since. Control of the island was wrested from the Japanese in the five-week Battle of Iwo Jima in 1945. Said battle was one of the bloodiest in the Pacific theater in WWII.

30. YouTuber or eBayer : NETIZEN
A netizen is an “Internet citizen”, someone with a presence on the Internet. I guess I would be a netizen, then …

32. It was often accompanied by a lyre in ancient Greece : ODE
The lyre is a stringed instrument most closely associated with Ancient Greece, and with the gods Hermes and Apollo in particular. According to myth, Hermes slaughtered a cow from a sacred herd belonging to Apollo and offered it to the gods but kept the entrails. Hermes used the entrails to make strings that he stretched across the shell of a tortoise, creating the first lyre. Apollo liked the sound from the lyre and agreed to accept it as a trade for his herd of cattle.

33. Component of the pigment Maya blue : ANIL
Anil is another name for the indigo plant, as well as the name for the blue indigo dye that is obtained from it. The color of anil is relatively close to navy blue. The main coloring agent in indigo dye is a crystalline powder called indigotin.

37. Fictional mariner also known as Prince Dakkar : NEMO
In the 1954 movie version of “20,000 Leagues Under the Sea”, Captain Nemo goes down with his ship. In the novel by Jules Verne the fate of Nemo and his crew isn’t quite so cut and dry, although the inference is perhaps that they did indeed head for Davy Jones’ Locker.

40. President between two Williams : THEODORE
President William McKinley was re-elected in 1900, but failed to serve out the full term. In September of 1901 he went to the Pan-American Exposition in Buffalo, New York where he went to meet the public at the Exposition’s Temple of Music. Leon Czolgosz was waiting for the president, armed with a pistol. Czolgosz shot the President twice before being subdued (and beaten) by the crowd. Doctors operated, and were able to stabilize President McKinley. The medical profession decided to leave one bullet inside the victim, on the face of it a good decision as the President spent almost a week apparently recovering from his ordeal. However, he relapsed, and eight days after being shot he died from gangrene surrounding the wound.

President Theodore Roosevelt was the first American to win a Nobel Prize in any field. He was awarded the Nobel Peace Prize in 1906 for his role in negotiating an end to the Russo-Japanese War.

44. Grandma Moses’ output : FOLK ART
“Grandma” Moses was the nickname of American folk artist Anna Moses. Anna’s moniker is perhaps particularly apt as she really only took up art as a career when she was 78 years old.

48. Round bump on a cactus : AREOLE
Areoles are bumps on the side of cacti from which grow clusters of spines. These areoles are one of the features of cacti that distinguish them from other succulent plants.

49. Emulate Bonnie and Clyde : ROB A BANK
Bonnie and Clyde were criminals who robbed and killed their way across the central US during the Great Depression. Clyde Barrow was born a desperately poor young boy just south of Dallas, Texas. He was always in trouble with the law, first getting arrested at the age of 16. He met Bonnie Parker in 1930 at a friend’s house, and the smitten Parker followed Clyde into a life of crime. The pair were killed by a posse of Texas police officers just four years later in Louisiana.

51. Croatia is on it : ADRIATIC
The Adriatic is the sea separating Italy from the Balkans.

53. Ineffective pill : DEADHEAD
A deadhead is a dull or unproductive person.

Down
2. Like herbal cigarettes : NO-TAR
The partially-combusted particulate matter that is produced as a cigarette burns forms a resinous material called “tar”. Cigarette tar is different than the tar used on roads, but is very toxic. Marijuana smoke produces a very similar tar to cigarette smoke, and is just as dangerous.

7. First-century megalomaniac : NERO
Nero was Emperor of Rome from 54 to 68 CE, and he had quite the family life. When he was just 16-years-old Nero married his step-sister Claudia Octavia. He also had his mother and step-brother executed.

8. Adding a “z” to its front forms its preceder : ETA
Eta is the seventh letter of the Greek alphabet, and is a forerunner of our Latin character “H”. Originally denoting a consonant, eta was used as a long vowel in Ancient Greek.

Zeta is the sixth letter of the Greek alphabet, and is a precursor of our Roman letter Z. The word “zeta” is also the ancestor of the name “zed”, which became “zee”, the pronunciation that we use here in the US.

10. Gordon Gekko or Rooster Cogburn : ANTIHERO
An “antihero”, perhaps in a movie or novel, is the “hero” of the piece, but someone who doesn’t exhibit the qualities associated traditionally with a hero, such as bravery or moral fortitude.

The classic 1969 western movie “True Grit” starring John Wayne is a screen adaptation of a 1968 novel by Henry Hathaway. The Coen brothers made another big screen adaption of the novel in 2010 starring Jeff Bridges in the Rooster Cogburn role previously played by John Wayne.

12. Bikini, notably : TEST SITE
The testing of US nuclear weapons by the US at Bikini Atoll in the middle of 1946 went by the codename “Operation Crossroads”. The tests used A-bombs and were designed to measure the effect of blasts on navy vessels. There were three tests planned, but the third had to be cancelled as the Navy couldn’t decontaminate the ships used in the second test.

16. 68 works of Haydn : QUARTETS
Josef Haydn was an Austrian composer, often called the “Father of the Symphony” due to his prolific output of symphonies that helped define the form. This is one of the reasons that he was known, even in his own lifetime, as “Papa Haydn”. Haydn was also the father figure among “the big three” composers of the Classical Period: Haydn, Mozart and Beethoven. Hayden was a good friend to Mozart, and a teacher of Beethoven.

18. Guitarist Zappa : DWEEZIL
Frank Zappa was an American composer and guitarist, a solo artist as well as the founding member of the rock band Mothers of Invention. You might like to meet his four children: Moon Unit, Dweezil, Ahmet Emuukha Rodan, and Diva Thin Muffin Pigeen.

20. “Rabbit of ___” (Bugs Bunny short) : SEVILLE
Elmer Fudd is one of the most famous of all the Looney Tunes cartoon characters, the hapless nemesis of Bugs Bunny. If you have never seen it, check out Elmer and Bugs in the marvelous “Rabbit of Seville”, a short cartoon that parodies Rossini’s “Barber of Seville”. Wonderful stuff …

36. Muckety-muck : POOH-BAH
The term “pooh-bah” (also “poobah”), meaning an ostentatious official, comes from the world of opera. Pooh-Bah is a character in the wonderful Gilbert & Sullivan comic opera “The Mikado”. Famously, Pooh-Bah holds many, many offices, including that of “Lord High Everything Else”.

43. Court colleague of Ruth and Elena : SONIA
Sonia Sotomayor is the first Hispanic justice on the US Supreme Court, and the third female justice. Sotomayor was nominated by President Barack Obama to replace the retiring Justice David Souter.

45. What’s often debugged : CODE
Back in 1947, the famed computer programmer Grace Hopper noticed some colleagues fixing a piece of equipment by removing a dead moth from a relay. She remarked that they were “debugging” the system, and so Hopper has been given credit for popularizing the term.

John Steinbeck considered “East of Eden” his magnus opus. Most of the storyline takes place near Salinas, just south of where I live here in the Bay Area. Two of the characters in the story are brothers Cal and Aron Trask, representative of the biblical Cain and Abel.