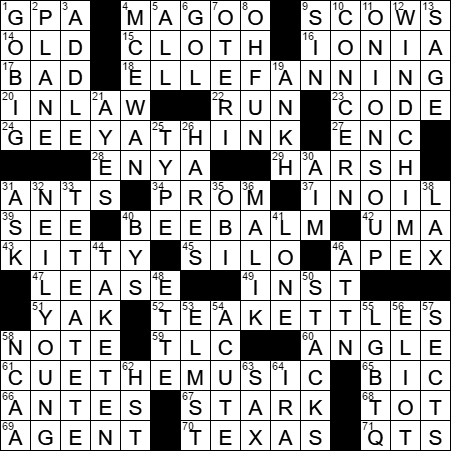 4. Nearsighted cartoon Mr. : MAGOO
Mr. Quincy Magoo is a wonderful cartoon character voiced by Jim Backus. Backus is probably equally well-known for playing Mr. Magoo as well as Thurston Howell, III on “Gilligan’s Island”. Mr. Magoo first appeared on the screen in a short called “The Ragtime Bear” in 1949. His persona was at least in part based on the antics of W. C. Fields. Backus originally used a fake rubber nose that pinched his nostrils in order to create the distinctive voice, although in time he learned to do the voice without the prop. My absolute favorite appearance by Mr. Magoo is in “Mr Magoo’s Christmas Carol”, a true classic from the sixties. There was a movie adaptation of “Mr Magoo” released in 1997, with Leslie Nielsen playing the title role.

9. Garbage-carrying boats : SCOWS
A scow is a flat-bottomed boat with squared-off ends that’s often used for transportation, usually pushed or pulled by a barge. Often a scow can be seen carrying junk or garbage.

Flax is mainly grown for its seeds (to make oil) and for its fibers. Flax fibers have been used to make linen for centuries, certainly back as far as the days of the Ancient Egyptians. Flax fibers are soft and shiny, resembling blonde hair, hence the term “flaxen hair”.

16. Ancient land near Lydia : IONIA
Lydia and Ionia were ancient territories in a part of the world now covered by modern-day Turkey. Both territories eventually fell under Greek and then Roman rule.

28. One-named New Age singer : ENYA
Enya’s real name is Eithne Ní Bhraonáin, which can translate from Irish into Enya Brennan. Her Donegal family (in the northwest of Ireland) formed a band called Clannad, which included Enya. In 1980 Enya launched her very successful solo career, eventually becoming Ireland’s best-selling solo musician. And, she sure does turn up a lot in crosswords!

New-Age music is created to provide a relaxing and stress-free atmosphere. The New Age movement is often said to have begun with the release of an album called “Spectrum Suite” by Steven Halpern in 1975.

34. Spring school dance : PROM
A prom is a formal dance held upon graduation from high school (we call them just “formals” over in Ireland). The term “prom” is short for promenade, the name given to a type of dance or ball.

37. How sardines are often packed : IN OIL
Sardines are oily fish related to herrings. Sardines are also known as pilchards, although in the UK “sardine” is a noun reserved for a young pilchard. Very confusing …

42. Actress Thurman : UMA
Uma Thurman started her working career as a fashion model, at the age of 15. She appeared in her first movies at 17, with her most acclaimed early role being Cécile de Volanges in 1988’s “Dangerous Liaisons”. Thurman’s career really took off when she played the gangster’s “moll” in Quentin Tarantino’s “Pulp Fiction” in 1994. My favorite of all Thurman’s movies is “The Truth About Cats & Dog’s”, a less acclaimed romcom released in 1996. She took a few years off from 1998 until 2002, doing very little work in favor of motherhood. It was Tarantino who relaunched her career, giving her the lead in the “Kill Bill” films.

43. Money in the middle of a poker table : KITTY
The pot in a card game has been referred to as the kitty since the 1880s. It’s not certain how the name “kitty” evolved but possibly it came from “kit”, the necessary equipment for the game.

45. Farm tower : SILO
“Silo” is a Spanish word that we absorbed into English, originally coming from the Greek word “siros” that described a pit in which one kept corn.

49. Caltech, e.g.: Abbr. : INST
Caltech is more properly known as the California Institute of Technology, and is a private research-oriented school in Pasadena. One of Caltech’s responsibilities is the management and operation of NASA’s Jet Propulsion Laboratory. If you watch “The Big Bang Theory” on television like me, you might know that the four lead characters all work at Caltech.

60. Each one in a square is 90° : ANGLE
In geometry, there are several classes of angles:

65. Popular pen : BIC
Société Bic is a French company, based in Clichy in France. The first product the company produced, more than fifty years ago, was the Bic Cristal ballpoint pen that is still produced today. Bic also makes other disposable products such as lighters and razors.

70. State where the Cotton Bowl is held : TEXAS
The Cotton Bowl college football game was played from its inception in 1937 until 2009 in Dallas, originally at the Texas State Fair Grounds. The game was moved to Cowboys Stadium in Arlington, Texas in 2010.

71. There are four in a gallon: Abbr. : QTS
The unit of volume “quart” is so called because it is one quarter of a gallon.

Down
2. Air Force One, for one : PLANE
We usually use the term “Air Force One” for the purpose-built military aircraft that transports the president, although any plane can use the call sign, provided the president is aboard. There was an incident in 1953 which a flight carrying President Eisenhower (flight no. Air Force 8610) flew close to commercial airliner (flight no. Eastern 8610). In order to avoid confusion of flight numbers in the future, the special call sign “Air Force One” was created.

4. Ian who wrote “Atonement” : MCEWAN
Ian McEwan is an English novelist with a track record of writing well-received novels. His most famous work at the moment I would say is “Atonement” which has benefited from the success of the fabulous movie adaptation released in 2007.

7. Onetime “S.N.L.” regular Cheri : OTERI
Cheri Oteri was the SNL (“Saturday Night Live”) cast member who regularly appeared with Will Ferrell in the skit featuring a pair of Spartan cheerleaders.

11. Dish in a bowl often served au gratin : ONION SOUP
To cook “au gratin” is to prepare something in a shallow dish with a crust of bread or cheese on top. In America we tend to think mainly of potatoes prepared this way, but the technique can be used for many different dishes. Notably, what we call French onion soup is called a “gratinée” in France, an onion soup with some bread and cheese baked on top.

19. Egyptian cross : ANKH
The ankh was the ancient Egyptian hieroglyphic character for “eternal life”. The ankh wasn’t just used in inscriptions but was often fashioned into amulets and as surrounds for mirrors (perhaps symbolizing a view into another world). The ankh is also known as “the key of the Nile” and “crux ansata” (Latin for “cross with a handle”).

32. Singer with the 1972 hit “Heart of Gold” : NEIL YOUNG
Neil Young is a singer and songwriter from Toronto, Ontario. Young is known for his solo work, as well as his earlier recordings with Buffalo Springfield and as the fourth member of Crosby, Stills & Nash. Young is also a successful movie director, although he uses the pseudonym “Bernard Shakey” for his movie work. Included in his filmography are “Human Highway” and “Greendale”.

35. Sash for a kimono : OBI
The lovely Japanese kimono is a garment worn by men, women and children. The word “kimono” translates simply as “thing to wear”, with “ki” meaning “wear” and “mono” meaning “thing”.

36. Pop singer Zayn formerly of One Direction : MALIK
One Direction is a UK-based boy band. Each member of the band competed in the reality show “The X Factor”, and didn’t do very well. The five were then combined in a boy band at a later stage of the competition. They only finished in third place, but I don’t think they care. They’re doing very, very well for “losers” …

40. Fly-___ (Blue Angels maneuvers) : BYS
“Blue Angels” is the popular name for the US Navy’s Flight Demonstration Squadron. The group was formed in 1946 and is the oldest of the US military’s flying aerobatic teams. The squadron took its nickname back in ‘46 from the Blue Angel nightclub that was around at that time in New York City.

53. Locale of a film “nightmare”: Abbr. : ELM ST
“A Nightmare on Elm Street” is a Wes Craven slasher-horror film that was released in 1984. As I don’t do “slasher” or “horror”, I only learned relatively recently that Johnny Depp was in the movie, making his feature film debut.

58. March Madness org. : NCAA
March Madness is the name given to the NCAA Men’s Division 1 Basketball Championship (among others), held in spring each year.

62. President before D.D.E. : HST
The letter “S” in the middle of the name Harry S. Truman (HST) doesn’t stand for anything. The future-president was named “Harry” in honor of his mother’s brother Harrison “Harry” Young. The initial “S” was chosen in honor of young Harry’s two grandfathers: Anderson S-hipp Truman and S-olomon Young.

63. Jazz instrument : SAX
The saxophone was invented by Belgian Adolphe Sax. Sax developed lip cancer at one point in his life, and one has to wonder if his affliction was related to his saxophone playing (I am sure not!). I had the privilege of visiting Sax’s grave in the Cemetery of Montmartre in Paris a few years ago.