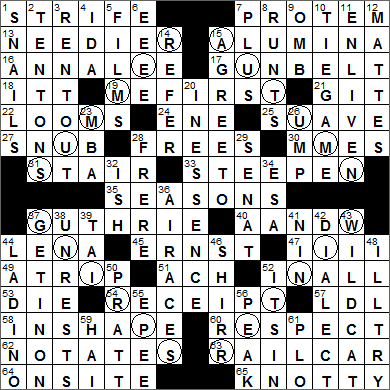 CROSSWORD SETTER: Joe Krozel
THEME: The Four Seasons … The circled letters are arranged in a diamond shape, with each side of the diamond being one of the four SEASONS:

Today’s Wiki-est, Amazonian Googlies
Across
7. Speaker ___ : PRO TEM
“Pro tempore” can be abbreviated to “pro tem” or “p.t.” “Pro tempore” is a Latin phrase that best translates as “for the time being”. It is used to describe a person who is acting for another, usually a superior.

15. Processed bauxite : ALUMINA
Bauxite is an aluminum ore. It takes its name from the absolutely beautiful village of Les Baux in southern France, the home of the geologist who first recognized that the mineral was a useful source of the metal.

18. Former giant in communications, for short : ITT
International Telephone & Telegraph (ITT) was formed in 1920 from the Puerto Rico Telephone Company. ITT divested its telecommunications business in 1986, today the company is known for its products in the field of water and fluids management, as well motion and flow control. Many of ITT’s products are sold into the aerospace market.

37. “This Land Is Your Land” composer/singer : GUTHRIE
Woody Guthrie was a singer-songwriter best known for his recording of the folk song “This Land is Your Land”, the lyrics of which were written by Guthrie himself.

40. Competitor of Mug : A AND W
A&W is a brand of root beer that has been around since 1920, when Roy Allen partnered with Frank Wright to create the A&W moniker from their family names.

44. Horne with backup horns : LENA
Lena Horne was an American jazz singer, actress, dancer and civil rights activist. Horne started out her career as a nightclub singer and then began to get some meaty acting roles in Hollywood. However, she ended up on the blacklist during the McCarthy Era for expressing left wing political views. One of Horne’s starring roles was in the 1943 movie “Stormy Weather” for which she also performed the title song.

45. Surrealist Max : ERNST
Max Ernst was a painter and sculptor, a pioneer in the Dada movement and Surrealism. Ernst was born near Cologne in Germany in 1891 and he was called up to fight in WWI, as were most young German men at that time. In his autobiography he writes “Max Ernst died the 1st of August, 1914” a statement about his experiences in the war. In reality, Ernst died in 1976 having lived to the ripe old age of 85.

47. Peculiar sundial numeral : IIII
Even though the correct Roman numeral for 4 is IV, but often the numeral is written as IIII on clock faces.

57. Cholesterol type, for short : LDL
LDL (low-density lipoprotein) is one of the compounds responsible for transporting fats around the body. When LDL is combined with cholesterol it can be referred to as “bad cholesterol”. This is because LDL actually transports cholesterol into the inner walls of blood vessels leading to atherosclerosis.

60. Word spelled out in an Aretha Franklin hit : RESPECT
I think Aretha Franklin, the Queen of Soul, had a tough life. Franklin had her first son when she was just 13-years-old, and her second at 15. In 2008, “Rolling Stone” magazine ranked Franklin as number one in their list of the greatest singers of all time.

63. Hobo transporter : RAILCAR
No one seems to know for sure how the term “hobo” originated, although there are lots of colorful theories. My favorite is that “hobo” comes from the first letters in the words “ho-meward bo-und”, but it doesn’t seem very plausible. A kind blog reader tells me that according to Click and Clack from PBS’s “Car Talk” (a great source!), “hobo” comes from “hoe boy”. Hoe boys were young men with hoes looking for work after the Civil War. Hobos differed from “tramps” and “bums”, in that “bums” refused to work, “tramps” worked when they had to, while “hobos” traveled in search of work.

Down
2. 20,000 pounds : TEN TONS
Here in the US, a ton is equivalent to 2,000 pounds. Over in the UK, a ton is 2,240 pounds. The UK unit is sometimes referred to as an Imperial ton or sometimes a “long ton”. Folks over there refer to the US ton then as a “short ton”. To further complicate matters, there is also a “metric ton” or “tonne”, which is equivalent to 2,204 pounds. I wish we’d just stick to kilograms …

4. Panhandle state: Abbr. : IDA
The US state of Idaho has a panhandle that extends northwards between Washington and Montana, right up to the border with Canada. Across that border is the Canadian province of British Columbia. Most of Idaho is in the Mountain Time Zone, but Northern Idaho (the Panhandle) is in the Pacific Time Zone.

8. Littlest ones in litters : RUNTS
Back around 1500. a runt was an old or decayed tree stump, and by the early 1600s “runt” was being used to describe animals that were similarly old and decayed. Ultimately “runt” came to mean the smallest and often sickest in a litter.

9. Executive fiscal grp. : OMB
The Office of Management and Budget (OMB) is the successor to the Bureau of the Budget, formed in 1970 during the Nixon administration. The main task of the OMB is to prepare the budget for the federal government, and the Director of the OMB is a member of the Cabinet.

29. French legislative body : SENAT
The French Senate (“Sénat”) meets in the beautiful Luxembourg Palace (“Palais du Luxembourg”) in Paris. There are occasions when both houses of the French Parliament (the Senate and the National Assembly) meet at the Palace of Versailles. This joint session is held for the purpose of voting on revisions to the Constitution, or to listen to an address by the President.

34. That, in Madrid : ESA
Madrid is the largest city in Spain and the capital. Madrid is located very close to the geographical center of the country. It is the third-largest city in the European Union (after London and Paris). People from Madrid called themselves Madrileños.

39. Mai ___ : TAI
The Mai Tai cocktail is strongly associated with the Polynesian islands, but the drink was supposedly invented in 1944 in Trader Vic’s restaurant in Oakland, California. One recipe is 6 parts white rum, 3 parts orange curaçao, 3 parts Orgeat syrup, 1 part rock candy syrup, 2 parts fresh lime juice, all mixed with ice and then a float added of 6 parts dark rum.

41. “Collages” author : NIN
Anaïs Nin was a French author, famous for her journals that she wrote for over sixty years from the age of 11 right up to her death. Nin also wrote highly regarded erotica and cited D. H. Lawrence as someone from whom she drew inspiration. Nin was married to banker and artist Hugh Parker Guiler in 1923. Decades later in 1955, Nin married former actor Rupert Pole, even though she was still married to Guiler. Nin and Pole had their marriage annulled in 1966, but just for legal reasons, and they continued to live together as husband and wife until Nin passed away in 1977.

“Collages” is the last novel that French author Anaïs Nin had published, in 1964.

42. Castilian vis-à-vis Spanish : DIALECT
The Kingdom of Castile was one seven medieval kingdoms of the Iberian Peninsula. The name comes from the large number of castles that were built across the kingdom.

43. Kind of strike : WILDCAT
Something described as “wildcat” runs without control or regulation.

46. Gather in rows, as cloth : SHIRR
Shirring is a decorative technique used when sewing a garment. I don’t understand it …

56. Everest, for one : PEAK
Mount Everest was first summited in 1953 by New Zealander Edmund Hillary and Nepali sherpa Tenzing Norgay. Hillary and Norgay were part of an expedition from which two pairs of climbers were selected to make a summit attempt. The first pair were Tom Bourdillon and Charles Evans, and they came within 330 feet of their goal but had to turn back. The expedition sent up the second pair two days later, and history was made on 29 May 1953.

59. Yes, in Yokohama : HAI
Yokohama is the second-most populous city in Japan. Yokohama lies on Tokyo Bay and is just a 40-minute drive from the nation’s capital.

61. Party in Mideast negotiations, for short : PLO
The Palestine Liberation Organization (PLO) was founded in 1964. The PLO’s early stated goal was the liberation of Palestine, with Palestine defined as the geographic entity that existed under the terms of the British Mandate granted by the League of Nations back in 1923. The PLO was granted observer status (i.e. no voting rights) at the United Nations in 1974.