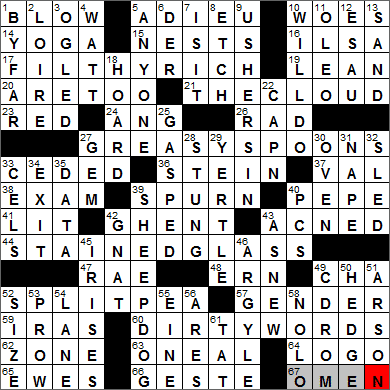 17A. Not just well-off : FILTHY RICH
27A. Low-class diners : GREASY SPOONS
44A. Window material in many cathedrals : STAINED GLASS

Today’s Wiki-est, Amazonian Googlies
Across
5. French goodbye : ADIEU
“Adieu” is the French for “goodbye” or “farewell”, from “à Dieu” meaning “to God”.

14. Exercise in which you might sit cross-legged : YOGA
“Asana” is a Sanskrit word literally meaning “sitting down”. The asanas are the poses that a practitioner of yoga assumes. The most famous is the lotus position, the cross-legged pose called “padmasana”.

16. Rick’s love in “Casablanca” : ILSA
I love the words of one critic describing the chemistry between Bogart and Bergman in the film “Casablanca” … “she paints his face with her eyes”. Wow!

19. Like Jack Sprat’s diet : LEAN
Jack Sprat was a nickname given in the 16th century to people of small stature. Jack featured in a proverb of the day:

21. Where many digital files are now stored : THE CLOUD
In the world of computing, when one operates “in the cloud”, one’s files and key applications are not stored on one’s own computer, but rather are residing “in the cloud”, on a computer(s) somewhere out on the Internet. I do 90% of my computing in the cloud. That way I don’t have to worry about backing up files, and I can operate from any computer if I have to …

23. “Curse you, ___ Baron!” : RED
Snoopy, the famous beagle in the “Peanuts” comic strip, has a number of alter-egos and is sometimes depicted as a World War I flying ace piloting a Sopwith Camel biplane. Snoopy’s arch-enemy in the air is Manfred von Richthofen, the Red Baron, and Snoopy can often be seen shaking his fist and crying out, “Curse you, Red Baron!”

24. Film director Lee : ANG
Taiwanese director Ang Lee sure has directed a mixed bag of films, mixed in terms of genre but not in terms of quality. He was at the helm for such classics as “Sense & Sensibility” (my personal favorite), “Crouching Tiger, Hidden Dragon”, “Hulk”, “Brokeback Mountain” and “Life of Pi”.

36. Oktoberfest beverage holder : STEIN
A stein is a type of beer glass. The term is German in origin, and is short for “Steinkrug” meaning “stone jug”. “Stein” is the German for “stone”.

37. Kilmer of “The Doors” : VAL
Val Kilmer’s first big leading role in a movie was playing Jim Morrison in Oliver Stone’s 1991 biopic “The Doors”. A few years later, Morrison was chosen for the lead in another big production, “Batman Forever”. Things haven’t really gone as well for Kilmer since then, I’d say. Off the screen, he flirted with the idea of running for Governor of New Mexico in 2010. A Hollywood actor as a Governor? Would never happen …

“The Doors” is a 1991 film about the rock band the Doors, and in particular the life of lead singer Jim Morrison. The film was directed by Oliver Stone and stars Val Kilmer as Morrison with Meg Ryan playing Morrison’s long-term companion Pamela Courson. Apparently the film was poorly received by Morrison’s family and the surviving band members.

40. ___ Le Pew of cartoons : PEPE
Pepé Le Pew is a very likeable cartoon character from the Looney Tunes and Merrie Melodies series. Pepé is a French skunk, first introduced way back in 1945. He is always thinking of “l’amour” and chases the lady skunks, or a black cat with a white stripe painted down her back accidently.

42. Belgian treaty city : GHENT
Ghent is a city in the Flemish region of Belgium. The War of 1812 (between Britain and the US) was formally concluded with the signing of the Treaty of Ghent. The American negotiating team in Ghent included Henry Clay and John Quincy Adams.

47. Pop singer Carly ___ Jepsen : RAE
Carly Rae Jepsen is a singer/songwriter from Mission, British Columbia. Jepsen got her start on TV’s “Canadian Idol” when she placed third in the show’s fifth season.

49. When repeated, a ballroom dance : CHA
The cha-cha-cha is a Latin dance with origins in Cuba, where it was introduced by composer Enrique Jorrin in 1953.

63. Tatum of “Paper Moon” : O’NEAL
Tatum O’Neal is the youngest actress to win a “competitive” Oscar. She won the Best Supporting Actress Award in 1974 when she was just 10 years old, for her role as Addie in “Paper Moon”. The youngest person to win an honorary Academy Award was Shirley Temple, who was only 5 years old when she was presented with an Oscar in 1934.

64. Apple’s apple, e.g. : LOGO
The logo of Apple, the computer company, is a silhouette of an apple with a bite taken out of it. The company’s original logo featured a picture of Sir Isaac Newton sitting under an apple tree.

66. “Beau ___” : GESTE
“Beau Geste” is a 1924 novel by the British writer P. C. Wren. The hero of the piece is Michael “Beau” Geste, an upper-class Englishman who joins the French Foreign Legion and embarks on a life of adventure and intrigue.

Down
2. France’s longest river : LOIRE
The Loire River is so long that it drains a full one-fifth of France’s land mass. It rises in the southeast, in the Cevennes mountain range, then it heads north and then due west, emptying into the Bay of Biscay at the city of Nantes.

4. Light bulb measure : WATT
James Watt was a Scottish inventor, a man who figured prominently in the Industrial Revolution in Britain largely due to the improvements he made to the fledgling steam engine. The SI unit of power is called the watt, named in his honor.

11. Margarine : OLEO
Emperor Louis Napoleon III of France announced a competition to develop a substitute for butter, a substitute that would be more accessible to the lower classes and more practical for the armed forces. In 1869, a French chemist called Hippolyte Mege-Mouries came up with something that he called oleomargarine, which was eventually manufactured under the trade name “margarine”. The name “oleomargarine” also gives us our generic term “oleo”.

12. Older son of Isaac : ESAU
Esau, was the grandson of Abraham and the twin brother of Jacob, the founder of the Israelites. When Esau was born to Isaac and Rebekah, the event was described, “Now the first came forth, red all over like a hairy garment”. Esau is portrayed later in life as being very different from his brother, as a hunter and someone who loves the outdoor life.

22. Quaker’s ___ Crunch : CAP’N
The first Cap’n Crunch commercials aired in 1963, at the time the product line was launched. The Cap’n’s full name is Captain Horatio Magellan Crunch, would you believe?. Crunch’s voice was provided for many years by Daws Butler, the same voice actor who gave us Yogi Bear and Huckleberry Hound.

28. Attacked by bees : STUNG
A queen bee has a stinger, just like worker bees. When a worker bee stings, it leaves it stinger in its victim. The worker bee dies after losing its stinger as the loss rips out part of its insides. However, a queen bee can sting with impunity as the stinger’s anatomy is different.

29. Dr. Seuss’ turtle : YERTLE
“Yertle the Turtle” is a story by Dr. Seuss. The book is noted for the inclusion of the word “burp”, which back in 1958 when it was published, was considered to be vulgar. But no one seemed to mind!

32. Iditarod vehicle : SLED
The Iditarod Trail Sled Dog Race covers a massive 1,161 miles, from Anchorage to Nome in Alaska. The race starts every year on the first Saturday in March, with the first race having been held in 1973. The fastest finishing time was set in 2002 at just under 9 days. The first few races only used a northern route, but then a southern route was added to the roster every second year. It’s kind of a good thing, because when the racers take the northern route they don’t even pass through the town of Iditarod!

33. Disney Store collectibles : CELS
In the world of animation, a cel is a transparent sheet on which objects and characters are drawn. In the first half of the 20th century the sheet was actually made of celluloid, giving the “cel” its name.

35. Facts and figures : DATA
Our word “data” (singular “datum”) comes from the Latin “datum” meaning “given”. The idea is that data are “things given”.

39. Border collie, for one : SHEEPDOG
The collie isn’t actually a single breed of dog, but rather the name given to a group of herding dogs that originate in Scotland and Northern England. An obvious (and wonderful) example would be the Border Collie. Many dogs classed as collies don’t have the word “collie” in the name of the breed, for example the Old English Sheepdog and the Shetland Sheepdog.

42. Pesky insect : GNAT
Gnats are attracted to the smell of rotting food, and to vinegar. Simple homemade traps that use vinegar are often constructed to attract and kill gnats.

45. Purple spring bloomers : IRISES
Iris is a genus of flowering plants that come in a wide variety of flower colors. The term “iris” is a Greek word meaning “rainbow”.

54. Lois of the Daily Planet : LANE
Lois Lane has been the love interest of Superman/Clark Kent since the comic series was first published in 1938. Lois and Clark both work for the big newspaper in the city of Metropolis called “The Daily Planet”. The couple finally got hitched in the comics (and on television’s “Lois and Clark”) in 1996. But never mind all that … one has to wonder how good the crossword is in “The Daily Planet” …

55. Mozart’s “___ kleine Nachtmusik” : EINE
Mozart’s Serenade No. 13 for strings in G major, is better known as “Eine Kleine Nachtmusik”, which translates into “a little serenade”, but the more literal English translation of “a little night music” is often used. It is a delightful piece in four, very recognizable movements, although there is much debate about a “lost” fifth movement.

56. Olympian war god : ARES
The Greek god Ares is often referred to as the Olympian god of warfare, but originally he was regarded as the god of blood-lust and slaughter. Ares united with Aphrodite to create several gods, including Phobos, Deimos and Eros. The Roman equivalent to Ares was Mars.

58. ___ contendere (court plea) : NOLO
“Nolo contendere” is a legal term that translates from Latin as “I do not wish to contend”. It’s the plea of “no contest” and is an alternative to “guilty” or “not guilty”, meaning that one doesn’t admit guilt but nor does one dispute the charge.

61. Body art, in slang : TAT
The word “tattoo” (often shortened to “tat”) was first used in English in the writings of the famous English explorer Captain Cook. In his descriptions of the indelible marks adorning the skin of Polynesian natives, Cook anglicized the Tahitian word “tatau” into our “tattoo”.