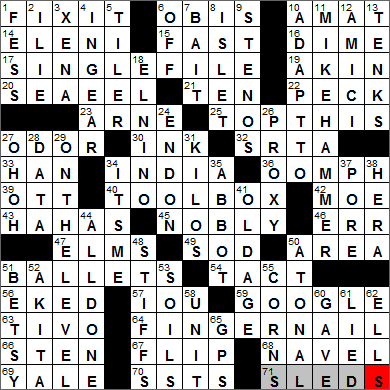 Today’s Wiki-est, Amazonian Googlies
Across
6. Geishas’ sashes : OBIS
The sash worn as part of traditional Japanese dress is known as an obi. The obi can be tied in what is called a butterfly knot.

14. Nicholas Gage memoir : ELENI
Nicholas Gage is a Greek-American author and investigative journalist. Gage wrote two memoirs, “Eleni” and “A Place for Us”. “Eleni” tells of his life in Greece during WWII and the Greek Civil War. The title is a tribute to his mother Eleni who was executed by Communists who occupied her village, simply because she helped her children escape from the ravages of a war of occupation. “Eleni” was adapted into a movie in 1985, with John Malkovich playing Gage.

16. Coin with F.D.R.’s image : DIME
President Roosevelt was a major driver in the founding of the National Foundation for Infantile Paralysis. The Foundation’s most successful fund raising campaign was to encourage the public to just send a dime to support the charity, so that even before the Foundation officially changed its name, the public were already calling it March of Dimes. After President Roosevelt passed away in office, Congress passed legislation calling for a new design for the dime, one featuring the image of FDR. The Roosevelt dime was introduced in 1946, on the day that would have been the President’s 64th birthday.

23. “Rule, Britannia” composer : ARNE
Thomas Arne was an English composer from London. Arne wrote some iconic compositions including “Rule, Britannia!” He also wrote a version of “God Save the King” that became the British national anthem.

“Rule Britannia!” was a poem by James Thomson, for which Thomas Arne composed the famous music.

33. Solo of “Star Wars” : HAN
Han Solo is the space smuggler in “Star Wars” played by Harrison Ford. Ford was originally hired by George Lucas just to read lines for actors during auditions for “Star Wars”, but over time Lucas became convinced that Ford was right for the pivotal role of Han Solo.

34. With 30-Across, black writing fluid : INDIA
(30A. See 34-Across : INK)
The black ink known as “India ink” was actually developed in the China, although the carbon pigment used was imported from India, hence the name.

42. Stooge with bangs : MOE
If you’ve seen a few of the films starring “The Three Stooges” you’ll have noticed that the line up changed over the years. The original trio was made up of Moe and Shemp Howard (two brothers) and Larry Fine (a good friend of the Howards). This line up was usually known as “Moe, Larry and Shemp”. Then Curly Howard replaced his brother when Shemp quit the act, creating the most famous trio, “Moe, Larry And Curly”. Shemp returned when Curly had a debilitating stroke in 1946, and Shemp stayed with the troupe until he died in 1955. Shemp was replaced by Joe Besser, and then “Curly-Joe” DeRita. When Larry Fine had a stroke in 1970, it effectively marked the end of the act.

51. “Swan Lake” and others : BALLETS
“Swan Lake” is such a delightfully light and enjoyable ballet by Pyotr Ilyich Tchaikovsky. “Swan Lake” tells the story of Odette, a princess turned into a swan by a sorcerer. The ballet also features Odile, Odette’s “evil twin”. Odile is disguised to look like Odette with the goal of tricking the prince to fall in love with her. In the ballet, the roles of Odette and Odile are played by the same ballerina.

56. Barely got, with “out” : EKED
To “eke out” means to “make something go further or last longer”. So, you can eke out your income by cutting back on expenses.

59. Bing competitor : GOOGLE
The search engine “Google” was originally called “BackRub” would you believe? The name was eventually changed to Google, an intentional misspelling of the word “googol”. A googol is a pretty big number, 10 to the power of 100. That would be the digit 1 followed by 100 zeros.

63. One way to record a show : TIVO
TiVo was introduced in 1999 and was the world’s first commercially successful DVR (Digital Video Recorder).

69. New Haven school : YALE
Elihu Yale was a wealthy merchant born in Boston in 1649. Yale worked for the British East India Company, and for many years served as governor of a settlement at Madras (now Chennai) in India. After India, Yale took over his father’s estate near Wrexham in Wales. It was while resident in Wrexham that Yale responded to a request for financial support for the Collegiate School of Connecticut in 1701. He sent the school a donation, which was used to erect a new building in New Haven that was named “Yale” in his honor. In 1718, the whole school was renamed to “Yale College”. To this day, students of Yale are nicknamed “Elis”, again honoring Elihu.

70. Concordes : SSTS
The most famous supersonic transport (SST) is the retired Concorde. Concorde was developed and produced under an Anglo-French treaty by France’s Aérospatiale and the UK’s British Aircraft Corporation (BAC).

Down
1. Admit, with “up” : FESS
The term “fess” is most often seen as part of the phrasal verb “to fess up” meaning “to admit to something”. “Fess” is simply a shortened form of “confess”.

2. Nastase of tennis : ILIE
I think that Ilie Nastase was the most entertaining tennis player of the 1970s, the days of Jimmy Connors, Bjorn Borg and John McEnroe. No matter how much pressure there was in a match, Nastase always had time to give the crowd a laugh.

3. TV’s Warrior Princess : XENA
The Xena character, famously played by New Zealander Lucy Lawless, was introduced in a made-for-TV movie called “Hercules and the Amazon Women”. Lawless reprised the role in a series called “Hercules: The Legendary Journeys”. Xena became so popular that a series was built around her character, with Lawless retained for the title role.

9. Dictation takers of years past : STENOS
Stenography is the process of writing in shorthand. The term comes from the Greek “steno” (narrow) and “graphe” (writing).

13. Marathon warm-up races : TEN-KS
The marathon is run over 26 miles and 385 yards, and of course commemorates the legendary messenger-run by Pheidippides from the site of the Battle of Marathon back to Athens. The actual distance run today was decided in 1921, and matches the length of the modern-day Marathon-Athens highway.

18. Pacific weather phenomenon : EL NINO
When the surface temperature of much of the Pacific Ocean rises more that half a degree centigrade, then there is said to be an El Niño episode. That small temperature change in the Pacific has been associated with climatic changes that can stretch right across the globe. El Niño is Spanish for “the boy” and is a reference to the Christ child. The phenomenon was given this particular Spanish name because the warming is usually noticed near South America and around Christmas-time.

26. Authorized substitute : PROXY
Our word “proxy”, meaning “the agency of one who acts instead of another”, comes from the Latin “procurare” meaning “to manage”, the same root as for our word “procure”.

38. Wife of Zeus : HERA
In Greek mythology, Hera was the wife of Zeus and was noted for her jealous and vengeful nature, particularly against those who vied for the affections of her husband. The equivalent character to Hera in Roman mythology was Juno. Hera was the daughter of Cronus and Rhea.

51. Ross the flagmaker : BETSY
Legend has it that Betsy Ross made the first American flag for General George Washington. However, this story only surfaced during the centennial celebrations of 1876, and although Betsy Ross was indeed one of several flag makers in Philadelphia in the days of George Washington, sadly there’s no definitive evidence that Ross provided that first stars and stripes.

52. Large Japanese dog : AKITA
The Akita breed of dog is named for its point of origin, the Akita Prefecture in Japan. When Helen Keller visited Japan in 1937, she asked for and was given an Akita breed of dog, with the name of Kamikaze-go. Sadly, the dog died within a year from distemper. The following year the Japanese government officially presented Keller with a replacement dog. Supposedly Keller’s dogs were the first members of the breed to be introduced into the US.

58. Condo, e.g. : UNIT
The words “condominium” and “apartment” tend to describe the one type of residential property, a private living space with facilities shared with others residing in the same building or complex. The difference is that a condominium is usually owned, and an apartment is rented. At least that’s how it is in the US. The word “condominium” comes from the Latin “com” (together) and “dominum” (right of ownership).

65. Auto accessory often mounted on the windshield, for short : GPS
GPS stands for Global Positioning System. The modern GPS system that we use today was built by the US military who received the massive funding needed because of fears during the Cold War of the use of Intercontinental Ballistic Missiles. We civilians all round the world owe a lot to President Ronald Reagan because he directed the military to make GPS technology available to the public for the common good. President Reagan was moved to do so after the Soviet Union shot down KAL flight 007 carrying 269 people, just because the plane strayed accidentally into Soviet airspace.