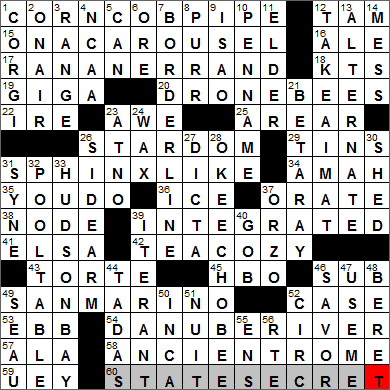 Today’s Wiki-est, Amazonian Googlies
Across
1. It’s made from an ear and put in the mouth : CORNCOB PIPE
Corncob pipes are made from cobs that have been dried for two years and are then hollowed out into the shape of a bowl. Famous smokers of corncob pipes were General Douglas MacArthur, Mark Twain, Norman Rockwell as well as Popeye and Frosty the Snowman.

12. Highlander’s accessory : TAM
A tam o’shanter is a man’s cap traditionally worn by Scotsmen. “Tams” were originally all blue (and called “blue bonnets”), but as more dyes became readily available they became more colorful. The name of the cap comes from the title character of Robert Burns’ poem “Tam O’Shanter”.

15. 1967 hit by the Hollies : ON A CAROUSEL
The Hollies are a great pop group from Manchester in the north of England. The band formed in 1962 and had big hits in the late sixties and early seventies. The list of songs from the Hollies includes classics like “He Ain’t Heavy, He’s My Brother”, “Carrie Anne”, “Long Cool Woman in a Black Dress” and “The Air That I Breathe”.

17. Copied the page? : RAN AN ERRAND
The original pages were youths who were preparing to become knights.

18. They often land next to queens: Abbr. : KTS
It is believed that the game of chess originated in northwest India, evolving from a 6th-century game called “chaturanga”, a Sanskrit word meaning “four divisions”. These four (military) divisions were represented in the game:

19. Prefix with flop : GIGA-
The performance of a computer in carrying out scientific calculations is sometimes measured in “FLOPS”. FLOPS stands for “floating-point operations per second”.

20. They often land next to queens : DRONE BEES
Drone bees and ants are fertile males of the species, whose sole role in life seems to be to mate with a queen.

34. Nanny, in Nanjing : AMAH
“Amah” is an interesting word in that we associate it so much with Asian culture and yet it actually comes from the Portuguese “ama” meaning “nurse”. Ama was imported into English in the days of the British Raj in India when a wet-nurse became known as an amah.

Nanjing is a city in eastern China that has been the nation’s capital several times. The name “Nanjing” means “southern capital”, whereas “Beijing” translates as “northern capital”.

41. Orphaned lion of literature : ELSA
The life story of Elsa the lion was told by game warden Joy Adamson, who had a very close relationship with the lioness from when Elsa was orphaned as a young cub. Adamson wrote the book “Born Free” about Elsa, and then “Living Free” which tells the story of Elsa and her three lion cubs. In the 1966 film based on “Born Free”, Adamson is played by the talented actress Virginia McKenna.

42. Knit at a social function? : TEA COZY
I don’t know what I’d do without my tea cosy/cozy, said he sipping away …

43. Brownie alternative : TORTE
A torte is a type of cake made primarily with eggs, sugar and ground nuts (but no flour).

I moved to the US from Ireland in 1983, and it was quite a culture shock. Now, things have changed and Irish people are more exposed to American culture today, but back then I was in awe of so many things that were new to me. Blue cheese dressing, grocery stores open at midnight, brownies. Beer … not so much …

45. “Veep” airer : HBO
“Veep” is a political satire sitcom on HBO that is a remake of the British show “The Thick of It”. “Veep” is set in the office of a fictional Vice President of the United States played by Julia Louis-Dreyfus.

49. Smallest member of the Council of Europe : SAN MARINO
San Marino is a small enclave in northern Italy with an area of just under 25 square miles. It is the oldest sovereign state and constitutional republic in the world, and has the world’s oldest constitution (dating back to 1600). What is most impressive to me is that San Marino has no national debt and a budget surplus. One can only dream …

54. It’s between Buda and Pest : DANUBE RIVER
The Danube is the second largest river in Europe (after the Volga), and actually flows through four European capitals (Vienna, Budapest, Belgrade and Bratislava).

58. Forum setting : ANCIENT ROME
The Roman forum was the public space in the middle of a city, taking it’s name from the Latin word “forum” meaning “marketplace, town square”.

Down
1. Herder from Wales : CORGI
The Welsh corgi is a herding dog, and one of the oldest breeds in Britain. Corgis aren’t speedy enough to do their job by running around livestock like collies, and instead nip at the heels.

4. Bulldogs play in it: Abbr. : NCAA
The Yale Bulldogs are the athletic teams of Yale University. The Yale school mascot is “Handsome Dan”, the Yale bulldog.

5. 86 : CAN
“To 86” is American slang mean “to get rid of”. The term originated with Hollywood film crews who often used an 85 filter when shooting outdoors in daylight, to filter out UV radiation that can give a blue cast to film. A camera without a filter was said to have an “86 filter”, so that “to 86” meant to take something away.

8. Himalayan production : PURR
The Himalayan breed of cat has long hair and is identical to the Persian, but with blue eyes and different colors at the extreme points of its coat.

9. Golfer Aoki : ISAO
Isao Aoki is one of Japan’s greatest golfers, now playing on the senior circuit. Aoki’s best finish in a major tournament was runner-up to Jack Nicklaus in the 1980 US Open.

10. Ayn Rand, e.g. : PEN NAME
Ayn Rand was the pen name of Russian-American novelist Alisa Rosenbaum. Rand’s two best known works are her novels “The Fountainhead” published in 1943 and “Atlas Shrugged” in 1957. Back in 1951, Rand moved from Los Angeles to New York City. Soon after, she gathered a group of admirers around her with whom she discussed philosophy and shared drafts of her magnum opus, “Atlas Shrugged”. This group called itself “The Collective”, and one of the founding members was none other than future Federal Reserve chairman, Alan Greenspan.

21. Product of some decay : BETA RAY
Beta particles (the constituents of beta rays) are the products of decay of a radioactive element. Beta particles are high-energy electrons or positrons emitted from the nucleus of the decaying element.

28. Locals call it the “Big O” : OKEECHOBEE
Lake Okeechobee is the largest freshwater lake in Florida, and the second largest freshwater lake contained completely within the 48 contiguous states (after Lake Michigan). It is a very shallow lake, perhaps more like a swamp, with an area about half the size of Rhode Island. Locals refer to Lake Okeechobee as “the Big O”.

31. End of a song often sung by inebriated people : SYNE
The song “Auld Lang Syne” is a staple at New Year’s Eve, the words of which were written by Scottish poet Robbie Burns. The literal translation of “Auld Lang Syne” is “old long since”, but is better translated as “old times”. The sentiment of the song is “for old time’s sake”.

33. Polar Bear Provincial Park borders it : HUDSON BAY
Hudson Bay in northern Canada is the second largest bay in the world, after the Bay of Bengal. Hudson Bay was named by English explorers after Henry Hudson who explored the area in 1610 on his ship “Discovery”. Hudson’s crew mutinied during that voyage and set Hudson and his officers adrift in a small boat. It is presumed that the castaways didn’t survive for very long.

Polar Bear Provincial Park lies way north in Ontario, right on the shore of Hudson bay. It is named for the hundreds of Polar Bears that migrate peacefully through the area.

37. Minestrone ingredient : ORZO
Orzo is pasta that has been formed into granular shapes, much like barley. And indeed, “orzo” is the Italian word for “barley”.

Minestrone is a hearty Italian soup with a varying recipe, but usually including lots of vegetables in a vegetable broth with added pasta or rice. The term “minestrone” comes from the Italian “minestrare” meaning “to serve”.

48. Part of Che Guevara’s attire : BERET
Ernesto “Che” Guevara was born in Argentina, and in 1948 he started to study medicine at the University of Buenos Aires. While at school he satisfied his need to “see the world” by taking two long journeys around South America, the story of which are told in Guevara’s memoir later published as “The Motorcycle Diaries”. While travelling, Guevara was moved by the plight of the people he saw and their working conditions and what he viewed as capitalistic exploitation. In Mexico City he met brothers Raul and Fidel Castro and was persuaded to join their cause, the overthrow of the US-backed government in Cuba. He rose to second-in-command among the Cuban insurgents, and when Castro came to power Guevara was influential in repelling the Bay of Pigs Invasion and bringing Soviet nuclear missiles to the island. Guevara left Cuba in 1965 to continue his work as a revolutionary. He was captured by Bolivian forces in 1967, and was executed. Fidel Castro led the public mourning of Guevara’s death, and soon the revolutionary was an icon for many left-wing movements around the world.

49. Junior in 12 Pro Bowls : SEAU
Junior Seau was an NFL linebacker, first playing for the San Diego Chargers and then the Miami Dolphins and the New England Patriots. Sadly, Seau was found dead in his home in 2011, having committed suicide by shooting himself in the chest.

50. Highlander of old : INCA
The Inca Empire was known as the Tawantinsuyu, which translates as “land of the four quarters”. The Inca Empire was a federal organization having a central government that sat above four “suyu” or “quarters”, four administrative regions.

51. Period sans soleil : NUIT
In French, a period of the day without sun (sans soleil) is night (nuit).

52. Magazine fig. : CIRC
A magazine’s (mag’s) sales figures are referred to as its circulation (circ.).

56. U.S.P.S. assignment : RTE
The US Postal Service (USPS) is a remarkable agency in many ways. For starters, the government’s right and responsibility to establish the Post Office is specifically called out in Article One of the US constitution. Also, the first postmaster general was none other than Benjamin Franklin. And the USPS operates over 200,000 vehicles, which is the largest vehicle fleet in the world.