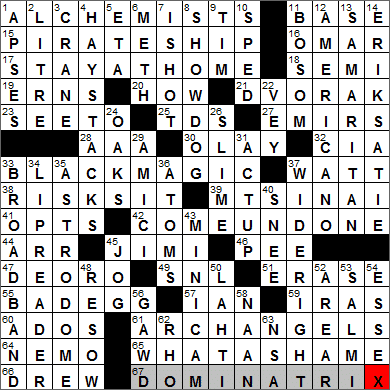 Today’s Wiki-est, Amazonian Googlies
Across
1. Ones who think things are good as gold? : ALCHEMISTS
11. Like metals used by 1-Across : BASE
One of the main goals of the ancient practice of alchemy was to change base metals into gold, a process known as transmutation.

15. Feared sight on the Spanish Main : PIRATE SHIP
When one thinks of the word “main” in the context of the sea, the Spanish Main usually comes to mind. Indeed, the use of the more general term “main”, meaning the sea, originates from the more specific “Spanish Main”. “Spanish Main” originally referred to land and not water, as it was the name given to the mainland coast around the Caribbean Sea in the days of Spanish domination of the region.

16. Obama’s favorite character on “The Wire” : OMAR
The character Omar Little is played by Michael K. Williams on the HBO series called “The Wire”. I didn’t watch “The Wire” when it first aired but we ending up buying all five series on DVD and we watched the whole thing a couple of years ago. It’s is a great drama series, and I thoroughly recommend it. Personally, I think that HBO produces some of the best dramas on American television.

Antonín Dvořák was a composer from Czechoslovakia who spent three years working and composing in the United States. He was the director of the National Conservatory of Music of America in New York from 1892 to 1895. Certainly here in the US, Dvořák’s best known work is his Symphony No. 9, “From the New World”, which is often referred to as “The New World Symphony”.

25. People might pass for them, for short : TDS
Touchdowns (TDs)

27. High line in the Middle East : EMIRS
An emir is a prince or chieftain, most notably in the Middle East. In English, “emir” can also be written as “amir” and “ameer” (watch out for those spellings in crosswords!).

30. Brand of body washes : OLAY
Oil of Olay was developed in South Africa in 1949. When Oil of Olay was introduced internationally, it was given slightly different brand names designed to appeal in the different geographies. In Ireland we know it as Oil of Ulay, for example, and in France it is Oil of Olaz.

32. Grp. with the Office of Iraq Analysis : CIA
The Central Intelligence Agency (CIA) is the successor to the Office of Strategic Services (OSS) formed during WWII. The CIA was chartered by the National Security Act of 1947.

37. Volt-ampere : WATT
James Watt was a Scottish inventor, a man who figured prominently in the Industrial Revolution in Britain largely due to the improvements he made to the fledgling steam engine. The SI unit of power is called the watt, named in his honor.

39. Peak transmission setting of old? : MT SINAI
According to the Bible, Mount Sinai is the mountain on which Moses was given the Ten Commandments. The Biblical Mount Sinai is probably not the mountain in Egypt that today has the same name, although this is the subject of much debate. The Egyptian Mount Sinai has two developed routes that one can take to reach the summit. The longer gentler climb takes about 2 1/2 hours, but there is also the steeper climb up the 3,750 “steps of penitence”.

45. First name of Woodstock’s last performer : JIMI
Many of his contemporaries regarded Jimi Hendrix as the greatest electric guitarist in the history of rock music. Hendrix was from Seattle and didn’t really have a really stellar start to his working life. He failed to finish high school and fell foul of the law by getting caught in stolen cars, twice. The courts gave him the option of the army or two years in prison. Hendrix chose the former and soon found himself in the famous 101st Airborne. In the army, his less-than-disciplined ways helped him (as he would have seen it) because his superiors successfully petitioned to get him discharged after serving only one year of his two-year requirement, just to get him out of their hair.

47. Golden, in Granada : DE ORO
Granada is a city and province in Andalusia in the south of Spain. Granada should not to be confused with Grenada (different spelling), the island nation in the Caribbean that was invaded by the US in 1983.

51. Get off the drive, say : ERASE
One often has to erase data from a computer drive.

64. Land capturer, in literature : NEMO
Ned Land was one of the protagonists in Jules Verne’s classic “20,000 Leagues Under the Sea”. Land and his colleagues get captured and are brought aboard the Nautilus submarine by Captain Nemo. In the famous movie adaptation from 1955, Ned Land was played by Kirk Douglas.

Done
1. Vaulted areas : APSES
The apse of a church or cathedral is a semicircular recess in an outer wall, usually with a half-dome as a roof and often where there resides an altar. Originally apses were used as burial places for the clergy and also for storage of important relics.

2. Tall order at a British pub : LITRE
We spell the measure “liter” in this country, but the spelling is “litre” on the other side of the Atlantic.

4. Frequent Monet subjects : HAYSTACKS
The Impressionist painter Claude Monet made a whole series of paintings featuring haystacks. There are a total of 25 canvases titled “Haystacks” that Monet painted between 1890 and 1891 near his home in Giverny in France.

5. Projection in the air, for short : ETA
Expected time of arrival (ETA)

6. Kind of bust : METH
“Meth” is a street name used for the drug methamphetamine, also called “crank” and “crystal meth”.

8. Well-trained boxer, maybe : SHOW DOG
The boxer breed of dog (one of my favorites!) originated in Germany. My first dog was a boxer/Labrador mix, a beautiful animal. Our current family dog is a boxer/pug mix, another gorgeous creature.

9. Punk rocker Armstrong with a 2012 Grammy : TIM
Tim Armstrong is a musician best known as singer and guitarist with the punk rock band Rancid and the supergroup the Transplants. Armstrong also used the stage name Lint earlier in his career, as well as Tim Timebomb.

12. First drink ever ordered by James Bond : AMERICANO
An Americano is a rather tasty cocktail made from Campari, sweet vermouth and club soda. The cocktail used to known as the “Milano-Torino”, as Campari comes from Milano (Milan) and Cinzano vermouth comes from Torino (Turin). The origin of the “Americano” name is disputed. Some say that ‘Americano” is in honor of the drink’s popularity with Americans visiting Italy in the early 1900s. Others say that the name comes from the Italian “amaro” meaning “bitter”. Even though Ian Fleming’s spy is very much associated with a “vodka martini, shaken not stirred”, the first drink he ordered in the series of books was an Americano.

13. Do-gooder : SAMARITAN
“The Good Samaritan” is a parable told by Jesus that can be read in the Gospel of Luke. According to the story, a Jewish traveler is robbed, beaten and left for dead at the side of the road. A priest happens by and sees the poor man, but does not stop to help. A fellow Jew also passes and refuses to help. A third man stops and gives aid. This kind person is a Samaritan, a native of Samaria. Back then Jewish and Samaritan people were said to generally despise each other, and yet here a detested creature gives aid. Jesus told to the story to a self-righteous lawyer, the intent being (I assume) to shake up his self-righteousness.

14. Composer called a “gymnopédiste” : ERIK SATIE
Erik Satie was a French composer most famous for his beautiful composition, the three “Gymnopédies”. I have tried so hard to appreciate other works by Satie but I find them so very different from the minimalist simplicity of the lyrical “Gymnopédies”.

22. Woe, in Yiddish : VEY
“Oy vey” is a Yiddish expression of dismay that literally translates as “oh, pain”. The more usual translation is “woe is me”.

Florence is the capital city of the Tuscany region in Italy. The city is known as “Firenze” in Italian.

35. Site of the 1992 Republican National Convention : ASTRODOME
The Astrodome is home to the Houston baseball team, once called the Colt .45s and now the Astros (after the ballpark). The Astrodome was named for the city’s long association with the US space program.

40. Weapon in “The Mikado” : SNEE
“Snick or snee” is the name given to cut and thrust while fighting with a knife. The phrase is rooted in a pair of Dutch words and it gave its name to a “snee”, a light sword-like knife.

50. “Swing Shift” Oscar nominee : LAHTI
Christine Lahti is an actress probably best known for playing Dr. Kate Austen on the TV medical drama “Chicago Hope”. If you read “The Huffington Post” you might run across her as well, as Lahti is a contributing blogger.

53. Game stew : SALMI
Salmi is a spicy dish made with roasted game birds that have been minced and stewed in wine.

54. Locale of London Stansted Airport : ESSEX
Essex is a county in England, referred to as one of the “home counties”.

Stansted Airport serves the London area. It is one of those airports favored by low-cost airlines as Stansted is about an hour’s ride by train or bus from the the center of London. London has two other airports who are much closer, namely Heathrow and Gatwick.

58. Side in an Indian restaurant : NAAN
Naan (also “nan”) bread is very popular in Indian restaurants, as well as in other West, Central and South Asian cuisines. Indian Naan is traditionally baked in a clay oven known as a tandoor.