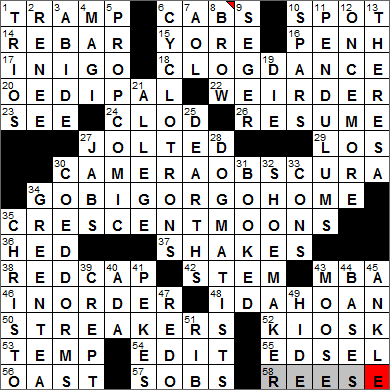 Today’s Wiki-est, Amazonian Googlies
Across
6. Much-hailed group : CABS
A hansom cab is a very specific design of horse and buggy that was patented by Joseph Hansom in 1834 in England. The “cab” in the name is short for “cabriolet”, a prior design of carriage on which the hansom was based. It’s from “hansom cab” that we get our modern term “cab”.

14. Slab strengthener : REBAR
A steel bar or mesh that is used to reinforce concrete is called “rebar”, short for “reinforcing bar”.

16. End of an Asian capital’s name : PENH
Phnom Penh (also “Pnom Penh”) is the capital of Cambodia, and has been so since the French colonized the country in the late 1800s. The city’s name translates from the Khmer language as “Hill of Penh”.

20. Like some unhealthy relationships : OEDIPAL
A oedipal relationship is one in which a child exhibits sexual desire for the parent of the opposite sex. A child exhibiting such behavior is said to have an Oedipus complex, named for the play “Oedipus Rex” by Sophocles.

26. Certain letter attachment : RESUME
A résumé is a summary of a person’s job experience and education and is used as a tool by a job seeker. In many countries, a résumé is equivalent to a curriculum vitae. “Résumé” is the French word for “summary”.

29. ___ Altos, Calif. : LOS
Los Altos is a wealthy city located not far from here, and is a largely residential community serving Silicon Valley and San Francisco. “Los Altos” is Spanish for “the heights”.

30. Provider of early projections : CAMERA OBSCURA
A camera obscura is an optical device made from a box or even a room with a hole in one side. Light from a scene passes through the hole and projects an image onto the inside of the box/room. The smaller the hole, the sharper is the image, but it is also darker.

He’d fly through the air with the greatest of ease,
That daring young man on the flying trapeze.

This is the chorus of the popular song “The Flying Trapeze” that was first published in 1867. The song is about flying trapeze circus performer Jules Léotard. As an aside, the trapeze artist’s name is now used for one-piece gymwear called a leotard, an article of clothing that Léotard popularized.

37. DQ offerings : SHAKES
Soft serve ice cream was developed by John McCullough in 1938. McCullough was able to get his new dessert carried by a local ice cream store in Illinois. He and the store owner became so swamped with sales that they opened a store specifically built around the product in Joliet, Illinois, hence creating the first Dairy Queen outlet. There are now over 5,700 Dairy Queen franchises in 19 countries. We’ve even got one in Ireland …

38. Worker who handles your case? : REDCAP
“Redcap” is a term used for a railroad station porter here in North America. That term of course comes from the fact that redcaps wear red caps!

43. With this, you’ll probably manage : MBA
The world’s first MBA degree was offered by Harvard’s Graduate School of Business Administration, in 1908.

48. Panhandler, of a sort? : IDAHOAN
The US state of Idaho has a panhandle that extends northwards between Washington and Montana, right up to the border with Canada. Across that border is the Canadian province of British Columbia.

52. Stand : KIOSK
Our word “kiosk” came to us via French and Turkish from the Persian “kushk” meaning “palace, portico”.

55. It would “make other cars seem ordinary,” per ads : EDSEL
The Edsel brand of automobile was named for Edsel, son of Henry Ford. Sadly, the name “Edsel” has become synonymous with “failure”, which was no fault of Edsel himself who had died several years before the Edsel line was introduced.

56. Brewery apparatus : OAST
An oast is a kiln used for drying hops as part of the brewing process. Such a structure might also be called an “oast house”.

58. Teammate of Robinson : REESE
Pee Wee Reese met Jackie Robinson after Robinson was signed to the Brooklyn Dodgers in 1947. As Reese tells the story, when he greeted Robinson it was the first time he had shaken hands with a black man. In those early days life was difficult for Robinson, and Reese made himself very visible as a friend, supporting the breaking down of racial barriers despite very vocal opposition.

Down
2. Girl’s name that means “born again” : RENEE
“René” and “Renée” are French for the adjective “reborn”, when applied to masculine and feminine nouns.

4. Holiday travelers? : MAGI
“Magi” is the plural of the Latin word “magus”, a term applied to someone who was able to read the stars. Hence, magi is commonly used with reference to the “wise men from the East” who followed the star and visited Jesus soon after he was born.

7. 1998 purchaser of Netscape : AOL
Netscape’s flagship product was its browser, which eventually came to be known as Netscape Navigator. Navigator had a huge impact on computing, basically bringing the Net to the masses by offering an intuitive, user-friendly interface. So popular was the product, that when the company had its IPO, the initial stock price set at $14 a share had to be doubled to $28 at the last minute. At the end of the first day’s trading, the stock closed at $75, and there were a lot of very rich people as a result (at least on paper!).

9. Bob in the Songwriters Hall of Fame : SEGER
Bob Seger struggled as a performing artist right through the sixties and early seventies before becoming a commercial success in 1976 with the release of his album “Night Moves”. Since then, Seger has recorded songs that have become classics like, “We’ve Got Tonight” and “Old Time Rock & Roll”.

19. Las Vegas block? : DIE
The numbers on dice are arranged so that the opposite faces add up to seven. Given this arrangement, the numbers 1, 2 and 3 all meet at a common vertex. Now, there are two ways of arranging the 1, 2 and 3 around the common vertex, a so called right-handed die (clockwise 1-2-3) or a left-handed die (counterclockwise 1-2-3). Traditionally, dice used in Western cultures are right-handed, whereas Chinese dice are left-handed. Quite interesting …

32. Worker also known as a cordwainer : SHOEMAKER
A cordwainer is a specialist shoemaker, one who makes luxury footwear especially from fine soft leather. Centuries ago, a cordwainer made luxury shoes and boots, whereas the craftsman who repaired said footwear was called a “cobbler”.

35. Big name in outdoor art : CHRISTO
Christo Javacheff is a Bulgarian-born artist from France. Along with his wife Jeanne-Claude Denat de Guillebon, Christo created what were termed environmental works of art. Most familiar to me was the complete wrapping of the Reichstag in Berlin. You might also remember a work called “The Gates”, which was made up of over 7,000 gates erected along 23 miles of pathways in New York City’s Central Park. Each of the gates was draped with orange-colored nylon fabric.

40. Nabokov’s longest novel : ADA
The reference here is to the 1969 novel by Vladimir Nabokov called “Ada”. The story takes place in the 1800s on Antiterra, an Earth-like planet that has a history similar to ours but with interesting differences. For example, there is a United States, but the country covers all of North and South America. What we call eastern Canada is a French-speaking province called “Canady”, and western Canada is a Russian-speaking province “Estody”. The plot-line is about a man called Van Veen who, when 14 years old, meets for the first time his cousin, 11-year-old Ada. The two cousins eventually have an affair, only to discover later that they are in fact brother and sister.

41. Furry toys : PEKES
The pekingese breed originated in China, as one might suspect from the name. Breeding practices have resulted in the the dog having many health problems, including breathing issues related to the “desirable” flat face. Standards have been changed in recent years, demanding an “evident muzzle” in an attempt to breed healthier dogs.

45. Tarsus location : ANKLE
The collection of seven bones in the foot just below the foot are known collectively as the tarsus. One of those bones is the talus (plural “tali”), more commonly called the ankle bone. The talus is the lower part of the ankle joint and articulates with the lower ends of the tibia and fibula in the lower leg.