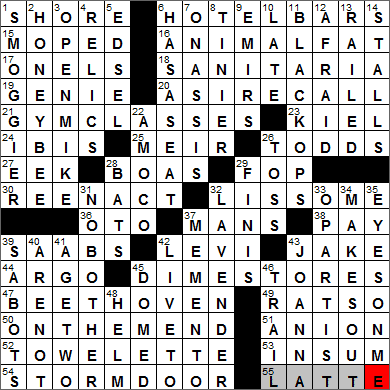 Today’s Wiki-est, Amazonian Googlies
Across
15. Scooter : MOPED
The word “moped” was coined in 1952, by a Swedish journalist called Harald Nielsen. The term is a portmanteau of “motor” and “pedal”.

16. It’s rendered in the kitchen : ANIMAL FAT
Fat, when extracted from the carcass of an animal, is called “suet”. Untreated suet decomposes at room temperature quite easily so it has to be “rendered” or purified to make it stable. Rendered fat from pigs is what we call “lard”. Rendered beef or mutton fat is known as “tallow”.

17. Group studying torts and procedures, typically : ONE LS
“One L” is a name used in general for first year law students.

The word “tort” is a French word meaning “mischief, injury or wrong”. Tort law is generally about negligence, when the action of one party causes injury to another but that action falls outside of the scope of criminal law.

19. Hardly a free spirit? : GENIE
The “genie” in the bottle takes his or her name from “djinn”. “Djinns” were various spirits considered lesser than angels, with people exhibiting unsavory characteristics said to be possessed by djinn. When the book “The Thousand and One Nights” was translated into French, the word “djinn” was transformed into the existing word “génie”, because of the similarity in sound and the related spiritual meaning. This “génie” from the Arabian tale became confused with the Latin-derived “genius”, a guardian spirit thought to be assigned to each person at birth. Purely as a result of that mistranslation the word genie has come to mean the “djinn” that pops out of the bottle. A little hard to follow, I know, but still quite interesting …

23. German port on the Baltic : KIEL
Kiel is a port city way north in Germany, lying even further north than Hamburg. The city is well known for hosting the annual Kiel Week sailing regatta, and it was twice host to the Olympic sailing events, in 1936 (the Berlin games) and 1972 (the Munich games).

The Baltic is a sea in northern Europe that is much less saline than the oceans. The lower amount of salt in the Baltic partially explains why almost half of the sea freezes during the winter. In fact, the Baltic has been known to completely freeze over several times over the past few centuries.

24. Large bill holder : IBIS
The ibis is a wading bird that was revered in ancient Egypt. “Ibis” is an interesting word grammatically speaking. You can have one “ibis” or two “ibises”, and then again one has a flock of “ibis”. And if you want to go with the classical plural, instead of two “ibises” you would have two “ibides”!

25. Historical role in Spielberg’s “Munich” : MEIR
Golda Meir was known as the “Iron Lady” when she was Prime Minister of Israel, long before the term came to be associated with British Prime Minister Margaret Thatcher. Golda Meir was born Golda Mabovitch in Kiev (in modern-day Ukraine), and when she was a young girl she moved with her family to the United States and settled in Milwaukee. As a teenager she relocated to Denver where she met and married Morris Meyerson, at the age of 19. She and her husband joined a kibbutz in Palestine in 1921, when she was in her twenties. Meir had been active in politics in the US, and continued her political work in Palestine. She was very influential during WWII, and played a leading role in negotiations after the war leading to the setting up of the state of Israel. By the time she was called on to lead the country, Meir had already retired, citing exhaustion and ill health. But serve she did, and led Israel during turbulent times (e.g. the massacre at the Munich Olympics, and the Yom Kippur War). She eventually resigned in 1974, saying that was what the people wanted.

26. Mrs. Lincoln’s family : TODDS
Mary Todd moved in the best of the social circles in Springfield, Illinois and there met the successful lawyer, Abraham Lincoln. The path to their marriage wasn’t exactly smooth, as the engagement was broken once but reinstated, with the couple eventually marrying in 1842.

28. Camp accouterments : BOAS
To appear more camp, someone might wear a feather boa.

32. Like a ballerina : LISSOME
“Lissome” is such a lovely word, meaning easily bent and supple. The term is a variation of “lithesome”.

36. Fox tribe neighbor : OTO
The Meskwaki are Native American people, also known as the Fox, who probably originated in the northeast along the St. Lawrence River. Over time, they migrated south and west, and after a turbulent journey ended up on reservations in Oklahoma. The Sacs people had similar origins as the Meskwaki, and similar migrations. The two groups eventually merged into the Sac and Fox Nation.

39. Cars whose only color until 1952 was bottle green : SAABS
The Saab 92 was the first car produced by Saab Automobile, manufactured from 1949 to 1956. Until 1952, all Saab 92s were painted British racing green, a color similar to bottle green. This was because Saab had a large surplus of green paint left over from the production of aircraft during WWII.

42. One of the 12 tribes of Israel : LEVI
In the Torah, the Israelites are traced back to Jacob, the grandson of Abraham. Jacob’s twelve sons became the ancestors of the Twelve Tribes of Israel. Jacob’s sons were:

44. Oscar-winning film based partly on the book “The Master of Disguise” : ARGO
“Argo” is a 2012 movie that is based on the true story of the rescue of six diplomats hiding out during the 1979 Iran hostage crisis, as recounted in the book “The Master of Disguise” by Tony Mendez. The film was directed by and stars Ben Affleck and is produced by Grant Heslov and George Clooney, the same pair who produced the excellent “Good Night, and Good Luck”.

47. Big name in classical education? : BEETHOVEN
Ludwig van Beethoven is one of my favorite composers from the Classical period. There are two excellent films that showcase his music and give fictionalized yet entertaining accounts of different aspects of his life: “Immortal Beloved” (1994) that speculates on the identity of one of Beethoven’s lovers, and “Copying Beethoven” (2006) that explores the events leading up to the triumphant premiere of his 9th Symphony.

49. 1969 role for Dustin Hoffman : RATSO
Ratso Rizzo is one of the characters in the groundbreaking 1969 movie “Midnight Cowboy”. Rizzo is a down-and-out con man, played by Dustin Hoffman.

55. Source of morning stimulation, maybe : LATTE
The term “latte” is an abbreviation of the Italian “caffelatte” meaning “coffee (and) milk”. Note that in the correct spelling of “latte”, the Italian word for milk, there is no accent over the “e”. An accent is often added by mistake when we use the word in English, perhaps meaning to suggest that the word is French.

Down
1. Harder to see through, say : SMOGGIER
“Smog” is of course a portmanteau word formed by melding “smoke” and “fog”. The term was first used to describe the air around London in the early 1900s.

4. The Shroud of Turin and others : RELICS
The Shroud of Turin has to be one of the most controversial, and most studied, human artifacts ever unearthed. The Shroud is a linen cloth on which there is the image of a man who appears to have wounds inflicted by crucifixion. Many believe that the Shroud is the burial cloth in which Jesus Christ was placed after he died on the cross. The Shroud was kept in various locations in France for centuries before being moved to Turin Cathedral in 1578, from which it gets its name, and where it has been located ever since.

5. Car that offered Polar Air air-conditioning : EDSEL
The Edsel brand of automobile was named for Edsel, son of Henry Ford. Sadly, the name “Edsel” has become synonymous with “failure”, which was no fault of Edsel himself who had died several years before the Edsel line was introduced.

Ellas is the Greek word for “Greece”, the name of the country. Greece is also known as the Hellenic Republic.

9. Some world leaders : EMIRS
An emir is a prince or chieftain, most notably in the Middle East. In English, “emir” can also be written as “amir” and “ameer” (watch out for those spellings in crosswords!).

22. Bygone station name : AMOCO
Amoco is an abbreviation for the American Oil Company. Amoco was the first oil company to introduce gasoline tanker trucks and drive-through filling stations. I wonder did they know what they were starting …?

28. Some Quidditch equipment : BATS
Quidditch is a game that is famously played in the “Harry Potter” series of books and films. The game is contended by two teams of seven wizards or witches flying on broomsticks. The are four animated balls and six ring-shaped goals floating in mid-air.

29. End of story? : FINIS
“Finis” is “the end, the finish” imported into English via French, as “finis” the French word for … “finshed”. Ultimately the term derives from the Latin verb “finire” meaning “to finish, limit” (also giving us “finite”).

32. Herb whose name is derived from the Latin for “to wash” : LAVENDER
“Lavender” is the common name for the plant genus Lavandula. Lavender is used as an ornamental plants, as a culinary herb and for the production of essential oils. The plant’s name might ultimately be derived from the Latin word “lavare” meaning “to wash”, a reference to use of essential oils in bathing.

Trompe-l’oeil is a technique in art that creates the optical illusion that a drawn object exists in three dimensions. “Trompe-l’oeil” is French for “deceive the eye”.

39. Footwear similar to klompen : SABOTS
There is a story that disgruntled textile workers would kick their wooden shoes, called sabots, into the looms in order to disable them so that they didn’t have to work. This act of vandalism was named for the shoe, an act of … sabotage.

A klomp (plural “klompen”) is a Dutch clog that covers the whole foot. Many of the millions of pairs of klompen made annually are actually sold to tourists as souvenirs, such is the close association of clogs with the Netherlands.

43. ___ Gleason, Tony winner for “Into the Woods” : JOANNA
Joanna Gleason is an actress from Toronto. Gleason has had many TV and film roles, but is best known for her stage performances. She won a Tony Award for Best Actress in a Musical in 1988 for her appearances in “Into the Woods”.

45. Like wigwams and igloos : DOMED
A tepee (also written as “tipi” and “teepee”) is a cone-shaped tent traditionally made from animal hides that is used by the Great Plains Native Americans. A wigwam is a completely different structure and is often a misnomer for a tepee. A wigwam is a domed structure built by Native Americans in the West and Southwest, intended to be a more permanent dwelling. The wigwam can also be covered with hides but more often was covered with grass, reeds, brush or cloth.