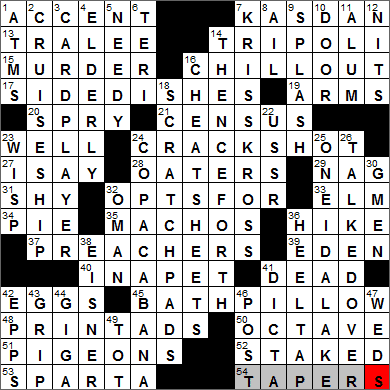 Today’s Wiki-est, Amazonian Googlies
Across
1. Attaché feature? : ACCENT
There is an acute accent over the last letter E in the word “attaché”.

7. Lawrence who co-wrote “The Empire Strikes Back” and “Return of the Jedi” : KASDAN
Lawrence Kasdan is a film producer, director and screenwriter. Kasdan wrote the script of the movie “The Bodyguard” and worked on the screenplays for “Return of the Jedi” and “Raiders of the Lost Ark”. He also directed and wrote the screenplay for “The Big Chill”.

13. Seat of Ireland’s County Kerry : TRALEE
Tralee is the county town of Kerry in Ireland. Tralee is home to the famed “Rose of Tralee” Festival that is so well attended by representatives from North America.

14. One of the former Barbary States : TRIPOLI
There were two Barbary Wars, fought between the US and the Barbary States of North Africa. The wars were caused by Barbary pirates and privateers attacking and extracting tributes from American ships in the Mediterranean. Presidents Jefferson and Madison directed the US Navy to attack the Barbary States of Tripoli, Tunis and Algiers in order to cut off support for the pirates.

15. Pride : lions :: ___ : crows : MURDER
There doesn’t seem to be a definitive etymology for “murder” as the collective noun for crows. One suggestion is that it comes from the scavenging behavior of crows, sometime feeding on rotting bodies of dead animals.

21. Public record? : CENSUS
The original census was taken during the days of the Roman Republic, and was a reckoning of all adult males who were fit for military service. The first US Census was taken in 1790, and was conducted by Federal marshals.

28. Many old B films : OATERS
The term “oater” that is used for a western movie comes from the number of horses seen, as horses love oats!

35. Domineering men : MACHOS
A man described as “macho” shows pride in his masculinity. “Macho” is a Spanish word for “male animal”.

36. Gridiron cry : HIKE
We never used the word “gridiron” when I was growing up in Ireland (meaning a grill used for cooking food over an open fire). So, maybe I am excused for finding out relatively recently that a football field gridiron is so called because the layout of yard lines over the field looks like a gridiron used in cooking!

53. Menelaus’ kingdom : SPARTA
In Greek mythology, Atreus was the father of Agamemnon and Menelaus. It was Menelaus who married Helen of Troy who was abducted by Paris, and Agamemnon who led the Greeks in the resulting Trojan War.

Sparta was a city-state in ancient Greece, famous for her military might. Spartan children had a tough upbringing, and newborn babies were bathed in wine to see if the child was strong enough to survive. Every child was presented to a council of elders that decided if the baby was suitable for rearing. Those children deemed too puny were executed by tossing them into a chasm. We’ve been using the term “spartan” to describe something self-disciplined or austere since the 1600s.

54. Menorah inserts : TAPERS
There is a seven-branched menorah used symbolically in ancient temples. However, the Hanukkah menorah is a nine-branched lampstand that is lit during the eight-day holiday called Hanukkah. “Menorah” is the Hebrew word for “lamp”.

Down
6. Dean’s “Lois & Clark” co-star : TERI
Teri Hatcher’s most famous role these days is the Susan Mayer character in “Desperate Housewives”. I’ve never seen more than a few minutes of “Housewives” but I do know Teri Hatcher as a Bond girl, as she appeared in “Tomorrow Never Dies”.

“Lois & Clark: The New Adventures of Superman” is a television show that aired originally from 1993 to 1997. The storyline focuses as much on the relationship between Clark Kent and Lois Lane as it does on Kent’s life as Superman. Clark and Lois are played by Dean Cain and Teri Hatcher.

7. Word puzzle popular since the 1930s : KRISS KROSS
A Kriss Kross is a variation of a crossword puzzle. Instead of clues, there is a list of words that needed to be filled into the grid. Placement of the words is largely by trial and error.

10. “If opportunity doesn’t knock, build a ___”: Milton Berle : DOOR
Comedian Milton Berle was known as “Uncle Miltie” and “Mr. Television”, and was arguably the first real star of American television as he was hosting “Texaco Star Theater” starting in 1948.

11. Diploma holder, for short : ALUM
An “alumnus” (plural … alumni) is a graduate or former student of a school or college. The female form is “alumna” (plural … alumnae). The term comes into English from Latin, in which alumnus means foster-son or pupil. “Alum” is an informal term used for either an alumna or an alumnus.

16. Cribs : CHEAT SHEETS
A crib is a plagiarism, most commonly the copying of an answer in an examination.

24. 1978 disco hit featuring the warning “Don’t fall in love” : COPACABANA
The Copacabana of song is the Copacabana nightclub in New York City (which is also the subject of the Frank Sinatra song “Meet Me at the Copa”). The Copa opened in 1940 and is still going today although it is struggling. The club had to move due to impending construction and is now “sharing” a location with the Columbus 72 nightclub.

25. Body of water belatedly added to the course of the Erie Canal : ONEIDA LAKE
Oneida Lake is the largest lake lying entirely within the state of New York. Oneida is situated close to New York’s Finger Lakes, but it isn’t one of them. Having said that, some regard Oneida Lake as the “thumb” that goes along with the “fingers”.

30. Mafioso foes : G-MEN
The nickname “G-men” is short for “Government Men” and refers to agents of the Federal Bureau of Investigation.

A Mafioso is a member of the Mafia, with the plural being Mafiosi (or sometimes Mafiosos).

32. Bahla Fort site : OMAN
The town of Bahla in Oman is famous for it’s old fort, pottery and a surrounding oasis.

38. Michael who once led Disney : EISNER
Michael Eisner took over as CEO of the Walt Disney Company in 1984. Eisner has been attributed with turning Disney around, as the company was floundering really since 1966 when Walt Disney died. Eisner had a good run, but ran foul of Walt Disney’s nephew Roy Disney who led a revolt that resulted in Eisner’s resignation in 2005.

42. Omar of TV and film : EPPS
Omar Epps is the actor who played Eric Foreman on the excellent television series “House”. Prior to playing Dr. Foreman, Epps had a recurring role playing Dr. Dennis Grant on “ER”. And, in another link to the world of medicine, Epps was born in Savannah, Georgia to single mom, Dr. Bonnie Epps.