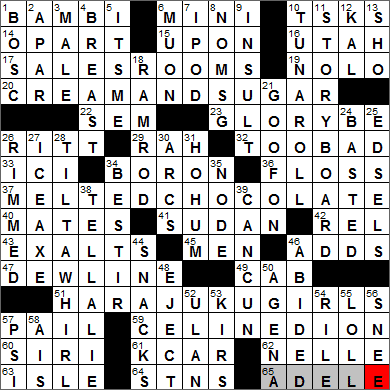 Today’s Wiki-est, Amazonian Googlies
Across
1. Innocent one : BAMBI
The 1942 Disney classic “Bambi” is based on a book written by Felix Salten called “Bambi, A Life in the Woods”. There is a documented phenomenon known as the Bambi Effect, whereby people become more interested in animal rights after having watched the scene where Bambi’s mother is shot by hunters.

6. Short shift? : MINI
A shift is a dress that is cut above-the-knee and has no clearly-defined waist. This style of dress originated in the 1920s when it was worn by the “flappers”, young women who defied social norms at the time. The shift was comfortable to wear and allowed easy movement, particularly on the dance floor.

15. Au courant about : UP ON
“Au courant” means up-to-date and comes into English directly from French, in which language it has the same meaning.

16. Home of Sunset and Paradise : UTAH
Sunset is a city in Utah located about 25 miles north of Salt Lake City. The city was named by a group of ladies in 1916, who were impressed by the beauty of a colorful sunset over the nearby Great Salt Lake.

Paradise is a city located in the very north of the state of Utah.

19. Plea opener : NOLO
“Nolo contendere” is a legal term that translates from Latin as “I do not wish to contend”. It’s the plea of “no contest” and is an alternative to “guilty” or “not guilty”, meaning that one doesn’t admit guilt but nor does one dispute the charge.

22. Theology inst. : SEM
Originally, a “seminary” was where plants were raised from seeds, as “semen” is the Latin for “seed”. The first schools labelled as seminaries were established in the late 1500s. Those first schools were more likely to be academies for young ladies back then, rather than for trainee priests.

26. “Stanley & Iris” director Martin : RITT
Martin Ritt is best remembered as a television and movie director. During the bad old days of the “Red Scare”, Ritt was working in television until he found himself on a blacklist for supposed support of Communist causes. He turned to the theater for work until the Red Scare had run its course, and then moved into the world of film. Some of his best known movies are “Hud”, “The Great White Hope” and “Norma Rae”.

“Stanley & Iris” is a 1990 film starring Jane Fonda and Robert De Niro in the title roles. This was Fonda’s last role before she “retired” from acting, only to make a comeback in 2005 in “Monster-in-Law”.

34. B, to scientists : BORON
Boron is the chemical element with the atomic number of 5. It lies over to the right in Group 13 of the Periodic Table of the Elements. Uncombined, elemental boron is not found naturally on Earth. The boron that is mined is found in oxide form, not as uncombined boron.

37. Ganache ingredient : MELTED CHOCOLATE
“Ganache” is a rich sauce made from chocolate and cream. To make a ganache, one pours heated cream over chopped chocolate, mixes until smooth, with perhaps a liqueur added for flavor. “Ganache” is French for “jowl”.

40. Brisbane buddies : MATES
Brisbane is the capital city of the state of Queensland, Australia. Brisbane is named for the Brisbane River that flows through the city. The river in turn is named for Scotsman Sir Thomas Brisbane who was the Governor of New South Wales in the 1820s. General Douglas MacArthur made Brisbane his headquarters after being forced out of the Philippines during WWII.

41. Country that split in two in 2011 : SUDAN
Sudan was the largest country in Africa until 2011, when the Southern Sudan region opted by referendum to become independent. “North Sudan” retained the name of Sudan, and the new state is called South Sedan. Sudan is now the third largest country in the continent, after Algeria and the Democratic Republic of the Congo.

51. Dancers known for their Japanese street-style wardrobe : HARAJUKU GIRLS
The Harajuku Girls are a group of four Japanese dancers who were hired by Gwen Stefani starting in 2004 to appear in concert performances and music videos. “Harajuku” is a neighborhood in Tokyo.

59. Singer whose first top 10 hit was “Where Does My Heart Beat Now” : CELINE DION
French-Canadienne singer Céline Dion first came to international attention when she won the 1988 Eurovision Song Contest, representing Switzerland in the competition that was hosted in Dublin, Ireland.

60. In Australia her name is Karen : SIRI
Siri is software application that works with Apple’s iOS operating system. “Siri” is an acronym standing for Speech Interpretation and Recognition Interface. You’ve probably seen the ads on television, with folks talking to their iPhones asking for information and responding with a voice. I hear that Google is a little scared by Siri, as Siri is non-visual. There’s no need to touch a screen or a keyboard to work with Siri, no opportunity to click on one of Google’s ads! By the way, voice-over artist Susan Bennett recently revealed herself as the female American voice of Siri. The British version of Siri is called Daniel, and the Australian version is called Karen.

61. 1980s Chrysler offering : K-CAR
Chrysler’s K-cars were designed to carry 6 passengers, on two bench seats. Remember taking a corner a little too fast on those seats, in the days when no one wore seat belts?

62. Harper Lee’s given name : NELLE
Nelle Harper Lee is an author from Monroeville, Alabama. Lee wrote only one novel, “To Kill a Mockingbird”, and yet that contribution to the world of literature was enough to earn her the Presidential Medal of Freedom and a Pulitzer Prize. Harper Lee was a close friend of fellow author Truman Capote who was the inspiration for the character named “Dill” in her novel.

64. Amtrak stops: Abbr. : STNS
Amtrak is the name used commercially by the National Railroad Passenger Corporation. “Amtrak” comes from a melding of the words “America” and “track”.

65. “Skyfall” singer : ADELE
The English singer Adele Adkins goes by the stage name “Adele”. Adele describes her musical style as “heartbroken soul”. Not too long ago, Adele wrote and performed the theme song for the latest James Bond film, “Skyfall”.

I have not been a fan of Daniel Craig as James Bond (preferring Sean Connery and Pierce Brosnan in the role). However, I saw “Skyfall” when it first came out and have been won over. “Skyfall” is one of the best Bond films so far, in my humble opinion …

Down
1. “The aristocrat of pears” : BOSC
Bosc is a cultivar of the European Pear grown in the northwest of the United States. The Bosc is that pear with a skin the color of a potato, with a long neck. I always seem to use the potato as my point of reference. How Irish am I …?

8. Chinese menu words : NO MSG
Monosodium glutamate (MSG) is the sodium salt of a naturally-occurring,non-essential amino acid called glutamic acid. It is used widely as a flavor enhancer, particularly in many Asian cuisines. Whether or not it is harmful seems to be still under debate. I say that something produced in a test tube shouldn’t be in our food …

9. Relative of a raspberry : INSULT
Not so much here in America, but over in the British Isles “blowing a raspberry” is a way of insulting someone (I think it’s called “a Bronx cheer” here in the US).

10. Sushi order : TUNA ROLL
Sushi is a Japanese dish that has as its primary ingredient cooked, vinegared rice. The rice is usually topped with something, most often fish, and can be served in seaweed rolls. If you want raw fish by itself, then you have to order “sashimi”.

11. Plot device? : STORYBOARD
“Storyboarding” is a process in which quickly drawn images are arranged in sequence on say a wall in order to pre-visualize a movie or cartoon. The process was developed in the thirties at the Walt Disney Studio. It’s a great system, and one that I even used in business, for setting plans and preparing presentations.

12. Early “Doctor Who” villain : KAL
Kal is a caveman who appeared as the very first villain in the “Doctor Who” sci-fi television show, way back in 1963.

The iconic science-fiction television show “Doctor Who” was first aired in 1963, and relaunched in 2005 by the BBC. The relaunched series is produced in-house by the BBC in Cardiff in Wales, the location that is the setting of the successful “Doctor Who” spin-off called “Torchwood”. The new show is about the Cardiff branch of the Torchwood Institute which investigates incidents involving extraterrestrials.

13. “Nurse Jackie” channel, for short : SHO
“Nurse Jackie” is a comedy-drama series centered on an emergency room nurse at a hospital in New York City. The lead character is played by Edie Falco, who also played Tony Soprano’s wife on the “The Sopranos”.

18. Musket loader : RAMROD
A ramrod is a “stick” that is inserted into the barrel of an older firearm in order to pack the bullet or ball tightly against the charge of gunpowder. A ramrod can also be used to push a cleaning rag through the barrel of a gun.

25. Collectible cars : EDSELS
The Edsel brand of automobile was named for Edsel, son of Henry Ford. Sadly, the name “Edsel” has become synonymous with “failure”, which was no fault of Edsel himself who had died several years before the Edsel line was introduced.

28. Carnival ride since 1927 : TILT-A-WHIRL
The Tilt-A-Whirl is the fairground ride that has seven cars on a spinning platform, with the cars rotating freely and randomly. Each of the cars hold 3-4 riders, pretty nauseated riders sometimes.

38. Prevaricate : TELL A LIE
“To prevaricate” is to stray from the truth. The term comes from a Church Latin word meaning “walk crookedly”.

39. Popular spring break locale : CANCUN
Cancún is a popular tourist destination on the southeast coast of the Yucatán Peninsula in Mexico.

50. NASA’s Gemini rocket : AGENA
The Agena Target Vehicle (ATV) was used in NASA’s Gemini program to practice rendezvous and docking maneuvers in preparation for the Apollo missions that would take man to the moon.

52. ___ Bator : ULAN
The name “Ulan Bator” translates from Mongolian as “the Red Hero”, and is Mongolia’s capital city. The “Red Hero” name was chosen in honor of the country’s national hero, Damdin Sükhbaatar. Sükhbaatar fought alongside the Soviet Red Army in the fight for liberation from Chinese occupation.

53. Wine-and-cassis drinks : KIRS
Kir is a French cocktail, made by adding a teaspoon or so of creme de cassis (blackcurrant liqueur) to a glass, and then topping it off with white wine. The drink is named after Felix Kir, the Mayor of Dijon in Burgundy, who used to offer the drink to his guests. My wife (expensive tastes!) is particularly fond of a variant called a Kir Royale, in which the white wine is replaced with champagne.

56. “The Mikado” weapon : SNEE
“Snick or snee” is the name given to cut and thrust while fighting with a knife. The phrase is rooted in a pair of Dutch words and it gave its name to a “snee”, a light sword-like knife.

57. Penultimate Greek letter : PSI
The Greek letter psi is the one that looks a bit like a trident or a pitchfork.It is the second last letter in the Greek alphabet, just before omega.

58. Grafton’s “___ for Alibi” : A IS
Sue Grafton writes detective novels, and her “alphabet series” features the private investigator Kinsey Millhone. She started off with “A Is for Alibi” in 1982 and is working her way through the alphabet, most recently publishing “U Is for Undertow” in 2009. What a clever naming system!