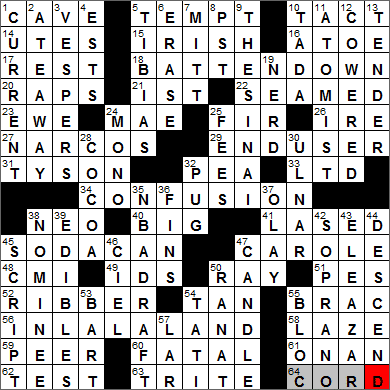 CROSSWORD SETTER: Dan Schoenholz
THEME: Con Fusion … the words at the outer edges of today’s grid need the word “CON” “FUSED” onto the end in order to match the clue:

34A. Puzzlement … or a hint to getting the 10 words on the perimeter of this puzzle : CONFUSION (also CON FUSION)

Today’s Wiki-est, Amazonian Googlies
Across
5. Court disaster? : TEMPT (also “contempt”)
“Contempt of court” is a court order that can result from a person being disrespectful of the court’s authority.

14. Pac-12 team : UTES
The Runnin’ Utes are the basketball team of the University of Utah. The team was given the nickname the Runnin’ Redskins back when Jack Gardner was the head coach from 1953 to 1971. The “Runnin'” part of the name was chosen because Gardner was famous for playing quick offenses. The “Redskins” name was later dropped in favor of the less controversial “Utes”.

15. Like the characters in “Angela’s Ashes” : IRISH
“Angela’s Ashes” is a Pulitzer-winning memoir by Frank McCourt. It tells of McCourt’s upbringing in an impoverished family in Limerick in the west of Ireland.

18. Secure, in a way : BATTEN DOWN
“Battens” are strips of wood, especially those used to secure canvas covers over a ship’s hatches. The phrase “batten down the hatches” means “to prepare for disaster, the impending storm”.

23. What a yeanling may grow up to be : EWE
A yeanling is a young sheep or goat.

24. Clarke who played the bride of Frankenstein : MAE
Mae Clarke was a Hollywood actress who was at the height of her career in the early days of “talkies”. She starred in the 1931 version of “The Front Page” and that same year starred opposite Boris Karloff in “Frankenstein”.

31. Holyfield rival : TYSON
The boxer Mike Tyson has said some pretty graphic things about his opponents. For example:

Evander Holyfield is a professional boxer from Atmore, Alabama. Holyfield was Undisputed World Champion twice over, once as a cruiserweight and then as a heavyweight.

33. Classic Ford : LTD
There has been a lot of speculation about what the acronym LTD stands for in the car model known as “Ford LTD”. Many say it stands for Luxury Trim Decor, and others that it is an abbreviation for “limited”. Although the car was produced in Australia with the acronym meaning Lincoln Type Design, it seems LTD was originally chosen as just three meaningless letters that sound well together.

38. Counterpart of paleo- : NEO-
The prefix “paleo-” means “prehistoric, primitive”. It comes from the Greek word “palaios” which means “old, ancient”. The prefix “neo-” would be the opposite, meaning “new, recent”.

47. King of pop music : CAROLE
Carole King is a marvelous singer-songwriter from Manhattan, New York. King started her career writing a string of hit songs with her partner and eventual husband Gerry Goffin (although they later divorced). King’s first composition to get to number one was “Will You Love Me Tomorrow”, which she wrote at 18 years of age for the Shirelles. Not so long ago, my wife and I saw the stage musical “Beautiful: The Carole King Musical”, which tells the story of King’s music and life. I highly recommend “Beautiful” …

51. Anatomical foot : PES
The Latin word for “foot” is “pes”, the genitive singular of which is “pedis”. “Pedis” evolved into the suffix -pede, as in centipede and millipede.

55. Bric-a-___ : BRAC
Bric-a-brac is a French phrase that was used as far back as the 16th century. Back then it was a nonsense term meaning “at random” or “any old way”. Since Victorian times we have used the phrase in English to mean a collection of curios, statues and the like. In modern usage, bric-a-brac tends to be a selection of cheaper items.

56. Out to lunch : IN LA-LA LAND
La-la land is a euphemism for a state of unconsciousness.

Down
3. Evening service : VESPERS
Vespers is an evening prayer service in some Christian traditions. “Vesper” is the Latin for “evening”. Vespers is also known as “Evensong”.

5. Leg bones : TIBIAS
The tibia is the shin bone, the larger of the two bones right below the knee. The tibia is the strongest weight-bearing bone in the human body. “Tibia” is the Roman name for a Greek flute and it is thought that the shin bone was given the same name because flutes were often fashioned out of the shin bones of animals.

9. Locale of long-running Mideast conflict : THE SINAI
The Sinai Peninsula is in the eastern part of Egypt, the triangular peninsula bounded by the Mediterranean to the north and the Red Sea to the south. It is the only part of Egypt that lies in Asia as opposed to Africa. The eastern land border of the peninsula is shared with Israel, and Israel occupied the Sinai during the 1956 Suez Crisis and the Six Day War of 1967.

11. Democritus or Leucippus, philosophically : ATOMIST
Leucippus lived in the 5th century BC in ancient Greece. He founded the Atomist Movement. The atomists believed that the world was composed of just atoms and voids, and that the atom was an indestructible particle. How wrong they were …

Democritus was a philosopher in Ancient Greece, a pupil of Leucippus (who founded the Atomist Movement). Fellow philosopher Plato wasn’t a big fan of Democritus, and even tried to get all of his books burned.

19. Napoleon Dynamite, e.g. : NERD
“Napoleon Dynamite” is a comedy film released in 2004 that stars Jon Heder in the title role. The movie was a commercial success above and beyond expectations. “Napoleon Dynamite” was made on the relatively low budget of about $400,000, and yet grossed almost $45 million within a year. The title character is a nerdy high school student who spends much of life living in his fantasy world.

28. ___ butter : COCOA
Cocoa butter is extracted from the cocoa bean and is used to make chocolate, among other things.

30. Kind of nerve : ULNAR
The ulnar nerve runs alongside the ulna (one of the bones in the lower arm). The ulnar nerve is the largest unprotected (not surrounded by muscle or bone) nerve in the human body. The nerve can be touched under the skin at the outside of the elbow. Striking the nerve at this point causes and an electric type shock, known as hitting one’s “funny bone”.

32. Bulldog-like toy : PUG
The pug is a breed of dog of Chinese origin. Our current family pet is a boxer/pug cross, a good-looking mutt!

36. Half-sawbucks : FINS
The US five-dollar bill is often called an “Abe”, as President Lincoln’s portrait is on the front. An Abe is also referred to as a “fin”, a term that has been used for a five-pound note in Britain since 1868.

“Sawbuck” is slang for a ten dollar bill. The term was applied to the bill as the Roman numeral X (ten) resembles the end of sawhorse.

37. Cosmetics brand : OLAY
Oil of Olay was developed in South Africa in 1949. When Oil of Olay was introduced internationally, it was given slightly different brand names designed to appeal in the different geographies. In Ireland we know it as Oil of Ulay, for example, and in France it is Oil of Olaz.

42. Member of a 2000s TV family : SOPRANO
“The Sopranos” is an outstanding television drama that was made by HBO and is a story about Italian-American mobsters in New Jersey. “The Sopranos” has made more money than any other television series in the history of cable television. It’s “must see TV” …

53. One of Homer’s greatest creations? : BART
On the animated TV show “The Simpsons”, Bart Simpson’s father is Homer.

54. “Mon Oncle” star : TATI
Jacques Tati was a very famous filmmaker in France. “Mon Oncle” is an Oscar-winning film that Tati released in 1958.

55. Tea Party, e.g. : BLOC
The Tea Party Caucus in the US Congress is chaired by Minnesota Representative Michele Bachmann. The stated focus for the caucus is fiscal responsibility and limited government, while adhering to the groups interpretation of the US Constitution. Top contributors to the caucus are health professionals, retirees, the real estate industry as well as oil and gas interests.