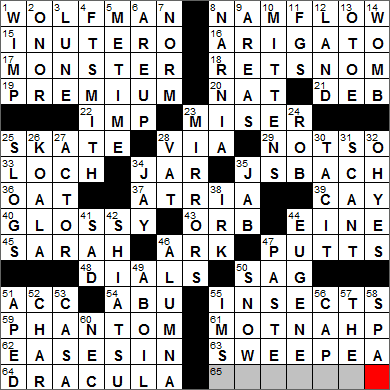 Note that solvers working the puzzle online might have to put letters X in the “blank” squares in order to get an “all correct” message when finished.

CROSSWORD SETTER: David Kwong
THEME: Monstrous Reflections … today’s grid has a mirror running down the center. There are also four Halloween creatures (depicted in movies) on the left side of the grid, with three of them reflected (spelled backwards) on the right side of the grid. Dracula is the fourth creature, but as we know, Dracula has no reflection in a mirror. So, instead of Dracula’s reflection, we have blanks:

23D. Things worth looking into? : MIRRORS

Today’s Wiki-est, Amazonian Googlies
Across
1. Universal Studios role of 1941 : WOLF MAN
8. 1-Across, in 23-Down : NAM FLOW (WOLF MAN “reflected”)
Lon Chaney, Jr. followed in his father’s footsteps as an actor, and most famously played the werewolf in the “The Wolf Man” series of films, starting in 1941. The young actor started his career using his real name, Creighton Chaney, but later adopted the name “Lon Chaney, Jr.” getting a boost from his father’s reputation. Chaney, Jr. also played Lennie Small in the 1939 film adaptation of the Steinbeck novel “Of Mice and Men”.

15. Not yet delivered : IN UTERO
“In utero” is a Latin term meaning “in the uterus”. The Latin “uterus” translates as both “womb” and “belly”. The Latin word was derived from the Greek “hystera” also meaning womb, which gives us the words “hysterectomy”, and “hysterical”.

17. Universal Studios role of 1931 : MONSTER
18. 17-Across, in 23-Down : RETSNOM (MONSTER “reflected”)
The classic 1931 film “Frankenstein” stars Colin Clive as Henry Frankenstein, and Boris Karloff as Frankenstein’s monster. The film is of course based on the Mary Shelley novel of the same name. Bela Lugosi was offered the role of Henry Frankenstein first, and then was recast as the Monster. Lugosi tried working with the role but eventually bowed out. Many say that the decision to leave was one of the worst of Lugosi’s career.

19. Gas grade : PREMIUM
The difference between a premium and regular gasoline is its octane rating. The octane rating is measure of the resistance of the gasoline to auto-ignition i.e. it’s resistance to ignition just by virtue of being compressed in the cylinder. This auto-ignition is undesirable as multiple-cylinder engines are designed so that ignition within each cylinder takes place precisely when the plug sparks, and not before. If ignition occurs before the spark is created, the resulting phenomenon is called “knocking”.

20. D.C. baseballer : NAT
The Washington Nationals baseball team started out life as the Montreal Expos in 1969. The Expos moved to Washington in 2005 becoming the Nats. There are only two Major Leagues teams that have never played in a World Series, one being the Mariners and the other the Nats.

21. Young socialite : DEB
Deb is short for “debutante”, which translates from French as “female beginner”.

22. Rapscallion : IMP
We might call a little imp a rapscallion, an evolution from “rascallion”, which in turn comes from “rascal”.

23. Clusterfist : MISER
A “clusterfist” is a tightwad or miser, someone who tends to be close-fisted, to hold onto his or her money.

25. Carnivorous fish : SKATE
Skates (formally “Rajidae”) are a family of fish in the superorder of rays (formally “Batoidea”). Skates look very similar to stingrays but they lack stinging spines.

37. What some hotel balconies overlook : ATRIA
In modern architecture an atrium (plural “atria” or “atriums”) is a large open space usually in the center of a building and extending upwards to the roof. The original atrium was an open court in the center of an Ancient Roman house. One could access most of the enclosed rooms of the house from the atrium.

39. Low reef : CAY
A “key” (also “cay”) is a low island offshore, as in the Florida Keys. Our term in English comes from the Spanish “cayo” meaning “shoal, reef”.

40. Like patent leather : GLOSSY
The traditional process that creates the shine on patent leather was developed in 1818 by Seth Boyden. Boyden used a lacquer coating based on linseed oil. Most patent leather today has a plastic coating.

45. Genesis wife : SARAH
In the Bible and the Quran, Sarah is the wife of Abraham and the mother of Isaac.

46. Genesis craft : ARK
The term “ark”, when used with reference to Noah, is a translation of the Hebrew word “tebah”. The word “tebah” is also used in the Bible for the basket in which Moses was placed by his mother when she floated him down the Nile. It seems that the word “tebah” doesn’t mean “boat” and nor does it mean “basket”. Rather, a more appropriate translation is “life-preserver” or “life-saver”. So, Noah’s ark was Noah’s life-preserver during the flood.

54. “Aladdin” monkey : ABU
Abu is a monkey in the Disney production of “Aladdin”. The character is based on Abu, a thief in the 1940 film “The Thief of Baghdad”.

59. Universal Studios role of 1925 : PHANTOM
61. 59-Across, in 23-Down : MOTNAHP (PHANTOM “reflected”)
Lon Chaney, Sr. played a lot of crazed-looking characters in the days of silent movies. He did much of his own make-up work, developing the grotesque appearances that became his trademark, and earning himself the nickname “the man of a thousand faces”. Most famous of all was his portrayal of “The Phantom of the Opera” in 1925.

63. Comic strip infant : SWEE’PEA
Originally Popeye used the nickname “swee’pea” to address his girlfriend Olive Oyl. Then along comes a baby, found on Popeye’s doorstep. Popeye adopts the little guy and raises him, calling him “Swee’Pea”.

64. Universal Studios role of 1931 : DRACULA
65. 64-Across, in 23-Down : (DRACULA “not reflected!”)
Bela Lugosi was a Hungarian stage and screen actor, best known for playing the title role in the 1931 film “Dracula” and for playing the same role on Broadway. Lugosi found himself typecast for the rest of his career and almost always played the role of the villain, often in horror movies. When he passed away in 1956, his wife had him buried in the costume he wore playing Count Dracula on Broadway.

Down
3. Crescent shape : LUNE
By definition a “lune” is a figure formed by the intersection of two arcs of two circles. Such an intersection creates the shape of a crescent moon. The name “lune” comes from the Latin word for the moon, “luna”.

4. Second-largest city in Ark. : FT SMITH
Fort Smith is the second-largest city in the state of Arkansas (after Little Rock) and lies in the very west of the state, on the border with Oklahoma. Fort Smith was founded as a military post in 1817. The fort was named for General Thomas Adams Smith who was in command of the US Army Rifle Regiment at the time the post was established.

7. An I.Q. of about 100, e.g. : NORM
Although it is correct these days to say that the abbreviation IQ stands for “intelligence quotient”, the term was actually coined by German psychologist William Stern, so it actually is an abbreviation for the German “Intelligenz-Quotient”.

8. C. S. Lewis setting : NARNIA
“The Chronicles of Narnia” is a series of children’s fantasy novels that were written by C. S. Lewis between 1949 and 1954. Most of the books are about a group of children from the real world in the magical kingdom of Narnia.

10. Nickname for a 2012 presidential candidate : MITTENS
Former Governor of Massachusetts Mitt Romney had the nickname “Mittens”.

13. Plains native : OTOE
The Otoe (also Oto) Native American tribe originated in the Great Lakes region as part of the Winnebago or Siouan tribes. The group that would become the Otoe broke away from the Winnebago and migrated southwestwards ending up in the Great Plains. In the plains the Otoe adopted a semi-nomadic lifestyle dependent on the horse, with the American bison becoming central to their diet.

26. Furry folivore : KOALA
The koala really does look like a little bear, but it’s not even closely related. The koala is an arboreal marsupial and a herbivore, native to the east and south coasts of Australia. Koalas aren’t primates, and are one of the few mammals other than primates who have fingerprints. In fact, it can be very difficult to tell human fingerprints from koala fingerprints, even under an electron microscope.

A “folivore” is a herbivore that mainly eats leaves.

27. Phoenix or Washington : ACTOR
The actor Joaquin Phoenix is the brother of actress Summer Phoenix and of the late River Phoenix.

34. Crested bird : JAY
The bird known as a “jay” is sometimes called a “magpie”, although the terms are not completely interchangeable.

42. Acupressure technique : SHIATSU
“Shiatsu” is a Japanese word meaning “finger pressure”, and is the name given to a style of massage.

44. Pacific Northwest city : EUGENE
Eugene is the second-largest city in Oregon (after Portland). The city is named for its founder, Eugene Franklin Skinner. Skinner arrived in the area in 1846, after which the settlement he established was called Skinner’s Mudhole. The name was changed to Eugene City in 1852, which was shortened to Eugene in 1889.

46. Barnard grad, e.g. : ALUMNA
An “alumnus” (plural … alumni) is a graduate or former student of a school or college. The female form is “alumna” (plural … alumnae). The term comes into English from Latin, in which “alumnus” means foster-son or pupil.

55. Some online communications, briefly : IMS
Even though instant messaging (sending IMs) has been around since the 1960s, it was AOL who popularized the term “instant message” in the eighties and nineties.

57. Start of 19 John Grisham novel titles : THE
“The Firm” is the book that brought John Grisham his first success, although it was the second novel that he wrote. The first was “A Time to Kill”, which garnered a lot more attention after “The Firm” took off. Personally, my favorite of his novels is “Runaway Jury”.

60. Asian electronics giant : NEC
NEC is the name that the Nippon Electric Company chose for itself outside of Japan after a re-branding exercise in 1983.