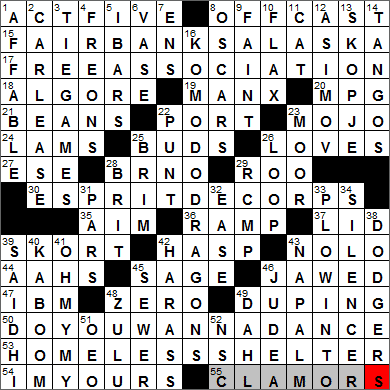 Today’s Wiki-est, Amazonian Googlies
Across
15. City named for Theodore Roosevelt’s vice president : FAIRBANKS, ALASKA
Fairbanks is the second largest city in Alaska (second to Anchorage), and home to almost 100,000 residents in the metropolitan area. The city was founded in 1901 and is named for Charles W. Fairbanks, a senator from Indiana who served as US Vice President during Theodore Roosevelt’s second term as President.

18. Webby Award winner who accepted saying “Please don’t recount this vote” : AL GORE
Al Gore was born in Washington DC, the son of Al Gore, Sr., then a US Representative for the state of Tennessee. After deferring his military service in order to attend Harvard, the younger Gore became eligible for the draft on graduation. Many of his classmates found ways of avoiding the draft, but Gore decided to serve and even took the “tougher” option of joining the army as an enlisted man. Actor Tommy Lee Jones shared a house with Gore in college and says that his buddy told him that even if he could find a way around the draft, someone with less options than him would have to go in his place and that was just wrong.

The Webby Awards recognize excellent on the Internet, and have been presented since 1995. One interesting twist in the Webby version of the award ceremony is that recipients are (theoretically) limited to five-word acceptance speeches.

19. With 11-Down, animal called “stubbin” by locals : MANX
(11D. See 19-Across : CAT)
I’ve seen Manx cats by the dozen on their native island. They’re found all over the Isle of Man (hence the name “Manx”) located in the middle of the Irish Sea. Manx cats have just a stub of a tail, and hence are called “stubbins” by the locals.

24. Flights : LAMS
To be “on the lam” is to be in flight, to have escaped from prison. “On the lam” is American slang that originated at the end of the 19th century. The word “lam” also means to “beat” or “thrash”, as in “lambaste”. So “on the lam” might derive from the phrase “to beat it, to scram”.

25. Taste makers? : BUDS
There are 2,000 to 8,000 taste buds on the human tongue, and together they detect five different tastes: salty, sour, bitter, sweet and umami. Taste buds have a short lifetime, and are replaced about every ten days.

36. Cloverleaf section : RAMP
Cloverleaf interchanges are so called as when viewed overheard they look like the leaves of a four-leaf clover.

39. Blended dressing? : SKORT
A skort is a hybrid between shorts and a skirt.

42. Shutter shutter : HASP
The “hasp” of a lock might refer to more than one thing. The u-shape loop protruding from a padlock is often called a “lock hasp”, for example.

43. Literally, “I do not wish to” : NOLO
“Nolo contendere” is a legal term that translates from Latin as “I do not wish to contend”. It’s the plea of “no contest” and is an alternative to “guilty” or “not guilty”, meaning that one doesn’t admit guilt but nor does one dispute the charge.

44. Sauna exhalations : AAHS
As my Finnish-American wife will tell you, “sauna” is a Finnish word, and is correctly pronounced “sow-nah” (with “sow” as in the female pig).

45. Solomonic : SAGE
According to the Bible, Solomon was the son of David and a king of Israel. Notably, Solomon is described as being very wise. In the story known as “the Judgment of Solomon”, Solomon was asked to decide who of two quarreling women was the mother of a baby. He suggested that they cut the baby in two with a sword, forcing one of the women to surrender the child rather than see it die. Solomon gave the child to the woman who showed compassion.

46. Chewed the fat : JAWED
Back in the day, a wealthy man would “bring home the bacon” and sit around with guests and “chew the fat”.

47. Watson’s creator : IBM
Watson is a program still in development at IBM. Watson is designed to answer questions that are posed in natural language, so that it should be able to interpret questions just as you and I would, no matter how the question is phrased. The program is named after the founder of IBM, Thomas J. Watson. Today’s Watson competed in a few memorable episodes of “Jeopardy!” in 2011 taking out two of the best players of the quiz show. That made for fun television …

50. 1965 Beach Boys hit : DO YOU WANNA DANCE?
“Do You Wanna Dance?” was recorded by the Beach Boys in 1965. The song was originally written and recorded as “Do You Want to Dance?” by Bobby Freeman in 1958, and then successfully covered in the UK by Cliff Richards and the Shadows in 1962. However, my favorite version of the song was released by Bette Midler in 1972, a slow and sultry rendition by the Divine Miss M.

54. Jason Mraz song that spent a record 76 weeks on Billboard’s Hot 100 : I’M YOURS
Jason Mraz is a singer-songwriter from Mechanicsville, Virginia. Jason is of Czech descent, and his name “Mraz” translates as “frost”.

Down
4. Some refrigerants : FREONS
Freon is a tradename for a group of compounds used as a refrigerant and also as a propellant in aerosols.

7. Nissan bumpers? : ENS
The bumpers (letters at either end) of the word “Nissan” are two letters N (en).

8. Annual event since 1929, with “the” : OSCARS
The Academy of Motion Picture Arts and Sciences (AMPAS) is the organization that gives the annual Academy Awards also known as the “Oscars”. The root of the name “Oscar” is hotly debated, but what is agreed is that the award was officially named “Oscar” in 1939. The first Academy Awards were presented at a brunch in 1929 with an audience of just 29 people. The Awards ceremony is a slightly bigger event these days …

10. Cigarette paper source : FLAX
Rolling papers (also “cigarette papers”) are used as the outer container for the tobacco (or other “leaf”) in a cigarette. Rolling papers are made from wood pulp, hemp, flax or rice straw. Apparently, roll-you-own cigarettes are the fastest growing segment of the US market. Smoking roll-your-owns avoids the taxes paid on manufactured cigarettes.

13. Macedonia’s capital : SKOPJE
Skopje is the capital city of the Republic of Macedonia. Skopje was hit by a powerful earthquake in 1963 (6.9 on the Richter Scale), which killed over a thousand people, and left over 100,000 people homeless. As well as the loss to life, over 75% of the city was destroyed, triggering a massive rebuilding effort supported by countries in the region and around the globe. One of Skopje’s most famous daughters was Mother Teresa.

16. Large monitors : KOMODO DRAGONS
The large lizard called a Komodo dragon is so named because it is found on the island of Komodo (and others) in Indonesia. It can grow to a length of over 9 1/2 feet, so I guess that explains the dragon part of the name …

23. “The Hound of the Baskervilles” backdrop : MOOR
“The Hound of the Baskervilles” is one of four “Sherlock Holmes” novels written by Sir Arthur Conan Doyle, regarded by many fans as the best of the series. “The Hound …” tells of a murder attempt on Dartmoor in Devon, England that is disguised as the act of a legendary supernatural hound. The novel also marks Doyle’s revival of his Sherlock Holmes character after he “killed him off” eight years earlier in a story called “The Final Solution”.

26. 1 Infinite ___ (address of Apple’s headquarters) : LOOP
Infinite Loop is a street located about 30 miles from here. Infinite Loop circles the six main buildings in the headquarters complex of Apple Inc. In the world of computing, an infinite loop is a defect in a program which cause it to loop endlessly, often causing the program to become unresponsive.

28. Dover soul : BRIT
Dover is a town and port in the county of Kent on the south coast of England. Dover lies just 25 miles from the coast of France, and is a terminus on the much-used Dover-Calais ferry service. The town is also famous its magnificent chalk cliffs that are known as the White Cliffs of Dover.

29. Force in red uniforms: Abbr. : RCMP
The Royal Canadian Mounted Police (the Mounties; RCMP) is an unusual police force in that it provides all policing for the whole country. The RCMP works on the national level, and right down to the municipal level. The force’s distinctive uniform of red serge tunic, blue pants with a yellow stripe, stetson hat etc. is known internally as “Review Order”. The red uniform dates back to the days of the North-West Mounted Police, which was one of the existing forces that were merged in 1920 to form the RCMP.

32. Palliate : EASE
To “palliate” is to relieve the symptoms of a disease or disorder, without effecting any form of a cure. “Palliate” comes from the Latin “palliatus” meaning “cloaked”.

34. Tip used for icing : SILENCER
A murderer might silence his gun when icing (killing) a victim.

43. Dresden decimator of 1945 : NAPALM
Napalm is a incendiary compound used in weapons that is made from petroleum mixed with a thickening agent. Napalm was developed in a secret program at Harvard during WWII. It was initially used in incendiary bombs and in flamethrowers. The thickening agent in napalm causes the burning material to stick to skin causing severe burns. Because of this, the UN declared the use of napalm in civilian areas a war crime in 1980.

46. Herod’s realm : JUDEA
Herod the Great was made King of the Roman province of Judea (now the southern part of Israel). Herod the Great’s son was Herod Antipas, the Herod who appears in the New Testament in the stories of the execution of Jesus of Nazareth and John the Baptist.

48. 1879’s Anglo-___ War : ZULU
The Anglo-Zulu War of 1879 was fought between British colonial forces and the Zulu kingdom of southern Africa. The war opened with a stunning victory by the Zulu as Isandlwana, but ended with Britain emerging victorious and the Zulu nation losing its independence.

51. War on Poverty agcy. : OEO
The Office of Economic Opportunity (OEO) was created during the Lyndon Johnson administration. The agency was responsible for administering the War on Poverty programs that were part of the President Johnson’s Great Society agenda. The OEO was shut down by President Nixon, although some of the office’s programs were transferred to other agencies. A few of the OEO’s programs are still around today, like Head Start for example.

52. Advisory grp. that includes the drug czar : NSC
The National Security Council (NSC) was created by President Harry S. Truman in 1947. The NSC is chaired by the sitting president and meets in the White House Situation Room.