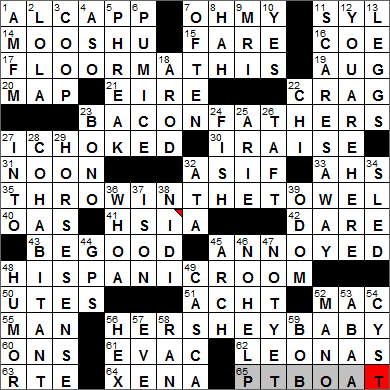 CROSSWORD SETTER: Samuel A. Donaldson
THEME: Throw in the Towel … we THROW in some HIS and HERS (as in TOWELS) on the ends of well-known phrases to get today’s themed answers:

14. Kind of pork on a Chinese menu : MOO SHU
Moo shu pork is a traditional dish from northern China, with the main ingredients being shredded pork and scrambled egg.

16. Cedar Rapids college : COE
Coe College is a private school in Cedar Rapids, Iowa that was founded in 1851. Coe is affiliated with the Presbyterian Church.

17. Blow away singer Johnny? : FLOOR MATHIS (“floor mat” + HIS)
Johnny Mathis had to face a tough choice in 1956. Mathis was a talented high jumper in college and was invited to try out for the US Olympic team destined for the Melbourne Games. At the same time he was scheduled to make his first recordings, in New York. Mathis opted to go to the Big Apple.

21. Name on some euros : EIRE
“Éire”, is the Irish word for “Ireland”. “Erin” is an anglicized version of “Éire” and actually corresponds to “Éirinn”, the dative case of “Éire”.

31. What may precede one : NOON
Our word “noon”, meaning “midday”, comes from the Latin “nona hora” that translates as “ninth hour”. Back in Ancient Rome, the “ninth hour” was three in the afternoon. Over the centuries, traditions such as church prayers and “midday” meals shifted from 3 p.m. to 12 p.m., and so “noon” became understood as 12 noon.

35. Call it quits … with a hint to 17-, 23-, 48- and 56-Across : THROW IN THE TOWEL
The expression “to throw in the towel” means “to give up”, and of course comes from the world of boxing. In boxing, when someone in the corner feels that a fight needs to be stopped, he or she throws a towel into the ring and accepts the loss. Back in the 1700s, it wasn’t a towel that was thrown into the ring, but rather a sponge.

40. Western treaty grp. : OAS
The Organization of American States (OAS) has its headquarters in Washington, D.C. All the independent states in the Americas are members of the group except Honduras, which had its membership suspended after the country’s 2009 coup.

42. Inspiration for a “Jackass” stunt, maybe : DARE
“Jackass” is a reality show that originally aired on MTV from 2000 to 2001. The show features a group of men doing stunts in which they usually get injured to some extent. The leader of the group is called Johnny Knoxville, who appears in the stunts and also created the show. Not my cup of tea …

A “panic room” or “safe room” is a fortified refuge installed in a building for use in the event of a break-in or natural disaster.

50. Salt Lake City athletes : UTES
The Runnin’ Utes are the basketball team of the University of Utah. The team was given the nickname the Runnin’ Redskins back when Jack Gardner was the head coach from 1953 to 1971. The “Runnin'” part of the name was chosen because Gardner was famous for playing quick offenses. The “Redskins” name was later dropped in favor of the less controversial “Utes”.

52. Bub : MAC
“Bub” is American slang, a term used to address males, and is possibly a variation of bud.

56. Toddler raised on chocolate? : HERSHEY BABY (HERS + “Hey, Baby”)
Milton Hershey used profits from the sale of his successful Lancaster Caramel Company to construct a chocolate plant in his hometown of Derry Church, Pennsylvania. He started building the factory in 1903, and by 1906 his chocolate was so successful Derry Church changed its name to Hershey, Pennsylvania.

62. Hotelier Helmsley and others : LEONAS
Leona Helmsley was a high-rolling real estate investor and hotel operator in New York City. She was convicted of income tax evasion in 1989 and sentenced to 16 years in jail. At her trial a witness quoted her as saying “We don’t pay taxes. Only the little people pay taxes.” No wonder Helmsley was known as the Queen of Mean …

64. Warrior princess of TV : XENA
The Xena character, famously played by New Zealander Lucy Lawless, was introduced in a made-for-TV movie called “Hercules and the Amazon Women”. Lawless reprised the role in a series called “Hercules: The Legendary Journeys”. Xena became so popular that a series was built around her character, with Lawless retained for the title role.

65. J.F.K.’s W.W. II craft : PT BOAT
PT boats were motor torpedo boats: small speedy vessels that used torpedoes as their primary weapon against large surface ships. The “PT” stands for “Patrol Torpedo”. The most famous PT boats that served during WWII were probably PT-41 that carried General Douglas MacArthur and his family from Corregidor to Mindanao in his escape from the Philippines, and PT-109 that was commanded by Lieutenant John F. Kennedy, future President of the United States.

2. Showgirl in the song “Copacabana” : LOLA
The Copacabana of song is the Copacabana nightclub in New York City (which is also the subject of the Frank Sinatra song “Meet Me at the Copa”). The Copa opened in 1940 and is still going today although it is struggling. The club had to move due to impending construction and is now “sharing” a location with the Columbus 72 nightclub.

4. Volcano on Kyushu : ASO
Mount Aso is the largest active volcano in Japan and is found on the island of Kyushu.

5. Telephone system hacker : PHREAK
Phreaking is the equivalent of computer hacking in the world of telecommunication systems. “Phreak” is a portmanteau of “phone” and “freak”.

6. Rock that may float : PUMICE
Pumice is volcanic rock that is formed by lava cooling, but with bubbles in it due to water and carbon dioxide frothing out of the lava as it cools. Because of the frothy structure, pumice is relatively light and is a great thermal insulator. As such, it is used in construction to make insulating breeze blocks. Pumice may also float in water.

9. Med. scan : MRI
A CT (or “CAT”) scan produces (via computer manipulation) a three dimensional image of the inside of an object, usually the human body. It does so by taking a series of two dimensional x-ray images while rotating the camera around the patient. The issue with CT scans is that they use x-rays, and high doses of radiation can be harmful causing damage that is cumulative over time. An MRI on the other hand (Magnetic Resonance Imaging), uses powerful magnetic fields to generate its images so there is no exposure to ionizing radiation (such as X-rays). We used MRI equipment in our chemistry labs at school, way back in the days when the technology was still called Nuclear Magnetic Resonance Imaging (NMRI). Apparently the marketing folks didn’t like the term “nuclear” because of its association with atomic bombs, so now it’s just called MRI.

13. Hosiery brand that sponsored women-only 10K races : L’EGGS
L’eggs is such a clever brand name, I think. L’eggs is a brand of pantyhose (L’eggs = legs), with its product sold, well it used to be, in egg-shaped containers (L’eggs = “the” eggs). The brand was introduced in 1969 and was an instant hit. The inventive marketing of L’eggs pantyhose led to a competitive response by Kayser-Roth who introduced the No Nonsense brand in 1973. The idea behind No Nonsense was that the packaging of L’eggs was just a gimmick, and here was a No Nonsense alternative. L’eggs won the battle though.

18. Biogenesis scandal nickname : A-ROD
The Biogenesis baseball scandal is the story that broke in 2013 in which several professional baseball players were accused of using performance-enhancing drugs supplied by a clinic called Biogenesis of America. The highest-profile player caught up in the scandal is Alex Rodriguez of the New York Yankees.

Ellas is the Greek word for “Greece”, the name of the country. Greece is also known as the Hellenic Republic.

23. U2’s frontman : BONO
Irish singer Bono is a Dubliner, born Paul David Hewson. As a youth, Hewson was given the nickname “Bono Vox” by a friend, a Latin expression meaning “good voice”, and so the singer has been known as Bono since the late seventies. His band’s first name was “Feedback”, later changed to “The Hype”. The band members searched for yet another name and chose U2 from a list of six names suggested by a friend. They picked U2 because it was the name they disliked least …

25. Indy racer Luyendyk : ARIE
Arie Luyendyk is a racing driver from the Netherlands, winner of the Indianapolis 500 on two occasions. Luyendyk’s son, also called Arie, is following in his father’s footsteps and is also an auto racer.

26. Ex-president who swore in President Hoover : TAFT
William Howard Taft may have been the 27th President of the United States, but his lifelong ambition was to be Chief Justice of the Supreme Court. President Taft was able to realize that dream in 1921, eight years after losing his bid for re-election as president. As Chief Justice, this former US President swore in two new presidents: Calvin Coolidge (in 1925) and Herbert Hoover (in 1929).

President Herbert Hoover was born in West Branch, Iowa, the only president to have been born in that state. His birthplace is now a National Landmark, and President Hoover and his wife are buried there, in the grounds of the Herbert Hoover Presidential Library and Museum. President Hoover died at the age of 90 years old in 1964 outliving his nemesis, Franklin Delano Roosevelt, by almost 20 years.

34. Anchorage-to-Nome racer : SLED
The Iditarod Trail Sled Dog Race covers a massive 1,161 miles, from Anchorage to Nome in Alaska. The race starts every year on the first Saturday in March, with the first race having been held in 1973. The fastest finishing time was set in 2002 at just under 9 days. The first few races only used a northern route, but then a southern route was added to the roster every second year. It’s kind of a good thing, because when the racers take the northern route they don’t even pass through the town of Iditarod!

37. Currently airs : IS ON
I suppose one might say that a particular TV program currently airs, is on …

38. Spiders’ nests : NIDI
“Nidus” is the Latin for “nest”. The term “nidus” (plural “nidi”) is used for the nests of some insects, spiders and small animals.

39. Lamar who married a Kardashian : ODOM
Lamar Odom is a basketball forward playing for the LA Clippers. Apparently Odom loves candy, and that’s how he earned his nickname, “The Candy Man”. Odom is married to Khloé Kardashian, and the couple’s wedding featured on an episode of the reality show “Keeping Up with the Kardashians”. Not a show that I have ever seen …

49. First to stab Caesar : CASCA
Julius Caesar was assassinated on the 15th (the ides) of March, 44 BC. He was attacked by a group of sixty people in the Roman Senate, and was stabbed 23 times. The first to strike a blow was Servilius Casca, who attacked Caesar from behind and stabbed him in the neck.

53. Simple quatrain form : ABAA
A quatrain is a group of four lines of poetry.

56. Put the whammy on : HEX
“Hexen” is a German word meaning “to practice witchcraft”. The use of the word “hex” in English started with the Pennsylvania Dutch in the early 1800s.

59. Go for apples : BOB
Bobbing for apples is a game played on Halloween. Participants must hold their hands behind their backs and grab apples floating in a large basin of water, using only their mouths.