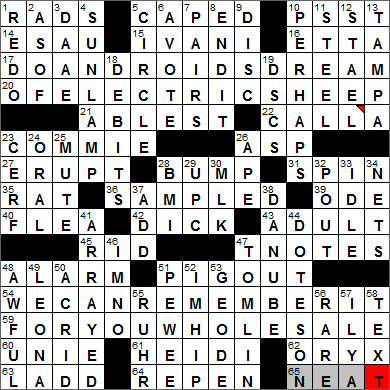 Today’s Wiki-est, Amazonian Googlies
Across
1. Exposure units : RADS
A rad is a unit used to measure radiation levels that is largely obsolete now. The rad has been superseded by the rem.

14. Biblical twin : ESAU
Esau, was the grandson of Abraham and the twin brother of Jacob, the founder of the Israelites. When Esau was born to Isaac and Rebekah, the event was described, “Now the first came forth, red all over like a hairy garment”. Esau is portrayed later in life as being very different from his brother, as a hunter and someone who loves the outdoor life.

15. First in a line of Russian grand princes : IVAN I
Ivan I was Prince of Moscow from 1325, succeeding his older brother Yuri III, who in turn succeeded their father Daniil Aleksandrovich. Daniil was the first Prince of Moscow, the first in a long line that culminated in Ivan the Terrible, who became the first Tsar of Russia.

16. Jazzy James : ETTA
Etta James was best known for her beautiful rendition of the song “At Last”. Sadly, as she disclosed in her autobiography, James lived a life that was ravaged by drug addiction leading to numerous legal and health problems. Ms. James passed away in January 2012 having suffered from leukemia.

17. With 20-Across, story by 42-Across on which the movie “Blade Runner” is based : DO ANDROIDS DREAM
20. See 17-Across : OF ELECTRIC SHEEP
“Blade Runner” is a cult classic, a sci-fi film made in 1982 loosely based on the novel “Do Androids Dream of Electric Sheep?” by Philip K. Dick. It was directed by Ridley Scott who regards “Blade Runner” as his most “complete” film. There is a phenomenon known as the “‘Blade Runner’ Curse”. An inordinate number of companies behind products that were displayed prominently in the movie found themselves in financial trouble soon after the movie’s release. Included in the list of troubled concerns are Atari, Cuisinart, Pan Am and the Bell System.

22. Kind of lily : CALLA
The Calla Lily is a common name for a lily of the genus Zantedeschia. There is a lily genus called Calla, but the Calla Lily isn’t in it. Now that, that is confusing …

26. Cause of a dramatic death in Shakespeare : ASP
In William Shakespeare’s play “Antony and Cleopatra”, the heroine of the piece addresses the asp as she uses the snake to commit suicide:

31. Music magazine founded by Bob Guccione Jr. : SPIN
“SPIN” is a magazine covering the music scene that was founded in 1985 by Bob Guccione Jr., the eldest son of Bob Guccione Sr. who founded “Penthouse”. “SPIN” had a rocky start to its life as in 1987, Bob Guccione Sr. shut down the magazine, despite relatively good sales. The son managed to rescue the situation, found new investors and partners and resumed publication after only a month away from the newsstands.

36. Like bits of old music in some new music : SAMPLED
In the world of music recording, sampling is the taking of part of one recording and reusing as part of another recording.

39. Keats creation : ODE
The poet John Keats is famous for writing a whole series of beautiful odes. The most renowned are the so-called “1819 Odes”, a collection from the year 1819 that includes famous poems such as “Ode on a Grecian Urn”, “Ode to a Nightingale” and “Ode to Psyche”.

42. Author Philip K. ___ : DICK
Philip K. Dick was a novelist and short story writer who was famous for his works of science fiction. To date there have been ten movies produced from his works including “Blade Runner”, “Total Recall”, “Minority Report”, “Paycheck” and “The Adjustment Bureau”. Despite this success, Dick spent most of his life in near poverty as almost all of the movies came out after he passed away in 1982.

47. Auctioned investments, in brief : T-NOTES
A Treasury note (T-Note) is a government debt that matures in 1-10 years. A T-Note has a coupon (interest) payment made every six months. The T-note is purchased at a discount to face value, and at the date of maturity can be redeemed at that face value. A T-Bill is a similar financial vehicle, but it matures in one year or less, and a T-Bond matures in 20-30 years.

48. Affright : ALARM
“To affright” is to terrify, cause fright.

54. With 59-Across, story by 42-Across on which the movie “Total Recall” is based : WE CAN REMEMBER IT
59. See 54-Across : FOR YOU WHOLESALE
“Total Recall” is a very entertaining 1990 sci-fi action movie starring Arnold Schwarzenegger. The film is loosely based on a short story by Philip K. Dick called “We Can Remember It for You Wholesale”. The 1990 film was remade in 2012. The 2012 version stars Colin Farrell, and is very forgettable …

60. Together, in Toulouse : UNIE
Toulouse is the fourth largest city in France, and is locate in the southwest of the country. These days, Toulouse is noted as home to the Airbus headquarters and is known as the center of the European aerospace industry.

61. Swiss miss of fiction : HEIDI
“Heidi” is a Swiss children’s book written and published in two parts. “Heidi” tells the story of a young girl in the care of her grandfather in the Swiss Alps.

62. African antelope : ORYX
The oryx is a large antelope species, mainly found in Africa but also in the Arabian Peninsula. One species was introduced by man into the White Sands Missile Range. As a result, the oryx is now considered an invasive species in the neighboring White Sands National Monument.

63. “Shane” star Alan : LADD
The classic 1953 western movie called “Shane” was based on the novel of the same name by Jack Schaefer published in 1949. Alan Ladd had a rough end to his life. In 1962 he was found unconscious in a pool of blood with a bullet wound in his chest, an abortive suicide attempt. Two years later he was found dead, apparently having died from an accidental overdose of drugs and sedatives. He was 50 years old.

9. Kind of brake : DISC
The drum brake was invented in 1902 by Louis Renault (founder of Renault, the automobile company). In a drum brake, there is a set of brake shoes that usually presses on the inner surface of the drum to slow down rotation. Nowadays, the disc brake system is more popular, a design which uses brake pads instead of brake shoes.

11. Andrew Carnegie’s industry : STEEL
Andrew Carnegie was an industrialist and philanthropist from Scotland who made his fame and fortune in the US steel industry. He founded the Carnegie Steel Company in 1892, which was destined to become US Steel. After he sold Carnegie Steel, making his fortune, Carnegie devoted the rest of his life to philanthropy. Famously, he built Carnegie Hall in New York, founded Carnegie Mellon University in PIttsburgh, and set up several charitable trust funds that are still doing valuable work today.

12. Author Madame de ___ : STAEL
Germaine de Staël was a French-speaking Swiss author active at the turn of the 19th century. She was commonly referred to as “Madame de Staël”. Staël was noted for her outspoken criticism of Napoleon in her native France, for which she suffered exile in Switzerland.

13. Home of the N.H.L.’s Lightning : TAMPA
The Tampa Bay Lightning are a team in the National Hockey League, commonly referred to as “the Bolts”.

19. Mil. awards : DSCS
The Distinguished Service Cross (DSC) is the second highest honor awarded to members of the US Army. The DSC is equivalent to the Navy Cross and the Air Force Cross.

23. Humorist Bennett : CERF
Many of you will remember Bennett Cerf as a regular panelist on the great television game show “What’s My Line?” He was a publisher and co-founder of Random House, and was the man responsible for winning publishing contracts with authors such as Eugene O’Neill, Truman Capote and James Michener. He was hilarious on “What’s My Line?”, appearing in almost every episode of the show which ran from 1951 to 1967. He had such a gentlemanly way of making the most puerile puns.

24. Like some contraceptives : ORAL
“The Pill” is more correctly called “the combined oral contraceptive pill”. The formulation is a combination of an estrogen called estradiol and a progestogen called progestin.

30. U2 song paying tribute to an American icon : MLK
Irish band U2 have recorded two songs as tributes to Martin Luther King, Jr., both of which appear on their 1984 album “The Unforgettable Fire”. The first is called “Pride (In the Name of Love)” and the second is a short lullaby called “MLK”.

38. View from Budapest : DANUBE
The Danube is the second largest river in Europe (after the Volga), and actually flows through four European capitals (Vienna, Budapest, Belgrade and Bratislava).

50. Astringent : ACRID
A substance that is astringent is a chemical compound that tends to shrink or constrict body tissues.

51. Bird that’s as small as it sounds : PEWEE
A pewee is a small bird, so called because of the “pee wee” sound that it makes.

52. Beatnik’s “gotcha” : I’M HIP
The term “beatnik” was coined by journalist Herb Caen in 1958 when he used it to describe the stereotypical young person of the “beat generation” that was oft associated with the writer Jack Kerouac. That stereotypical beatnik would be playing the bongos and rolling his or her own cigarettes. Male beatniks tended to sport goatees and wear berets.

53. Sparkly rock : GEODE
A geode is a rock in which there is a cavity lined or filled with crystal formations.

55. Essen’s river : RUHR
The Ruhr is a medium-sized river in Germany that flows from east to west, ultimately emptying into the Rhine.