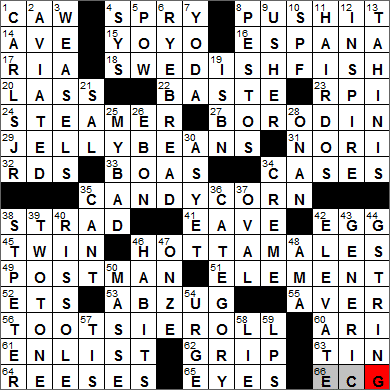 CROSSWORD SETTER: Joel Fagliano
THEME: Halloween Dinner … today’s themed answers are types of candy, something that might be eaten for “dinner” by the little ones on Halloween. Each of the candies end with the name of a food that might be served at a “legitimate” item at a Halloween dinner:

Today’s Wiki-est, Amazonian Googlies
Across
8. 1988 Salt-N-Pepa hit : PUSH IT
Salt-n-Pepa are a hip hop trio from New York. Their 1991 song “Let’s Talk Sex” created quite a fuss as the lyrics explored the subject of sex, and safe sex in particular. A later version addressed the dangers of AIDS.

14. Washington in D.C., e.g. : AVE
Famously, the layout of the streets in Washington was designed by French-born American architect Pierre Charles L’Enfant. The L’Enfant Plan called for a grid of east-west and north-south streets. This grid was criss-crossed with diagonal avenues. The avenues and streets met at circles and rectangular plazas. Later, the diagonal avenues were named for states of the union.

18. Part of a Halloween dinner? : SWEDISH FISH
Swedish Fish is a brand of wine gum candy that is shaped like a fish. Believe it or not, Swedish Fish is made in Sweden …

20. Girl in tartan : LASS
Tartan is sometimes called “plaid” over here in the US, a word not used in the same sense outside of this country. In Scotland a “plaid” is a blanket or a tartan cloth slung over the shoulder.

23. Upstate N.Y. college : RPI
The Rensselaer Polytechnic Institute (RPI) is a private school in Troy, New York. The university is named after its founder Stephen Van Rensselaer who set up the school in 1824. The goal of RPI has always been the “application of science to the common purposes of life”, an objective set by the founder. Given that, the name for the school’s sports teams is quite apt: the Engineers.

24. Soft-shell clam : STEAMER
Soft-shell clams are so called because they have thin calcium carbonate shells that are easily broken. They are known as “steamers”, especially in the New England where they are often served at a clambake.

27. “Prince Igor” composer : BORODIN
“Prince Igor” is an opera by the Russian composer, Alexander Borodin. Borodin died before he had finished “Prince Igor”, so it was completed by Nikolai Rimsky-Korsakov and Alexander Glazunov. Music from “Prince Igor” and other Borodin works was used in the American musical “Kismet”.

29. Part of a Halloween dinner? : JELLY BEANS
The candy known as jelly beans are thought to have originated in Boston. It is documented that they were sent by families and friends of soldiers fighting in the Civil War.

33. Breathtaking creatures? : BOAS
Boa constrictors are members of the Boidae family of snakes, all of which are non-venomous. Interestingly, the female boa is always larger than the male.

35. Part of a Halloween dinner? : CANDY CORN
Candy corn is a candy that is seen mainly around Halloween in North America. Candy corn is made to look like kernels of corn, with a yellow base, orange center and white tip. The original candy corn was created by the Wunderle Candy Company in Philadelphia in the 1880s.

38. Pricey violin : STRAD
Generations of the Stradivari family produced violins, the most famous of which were constructed by Antonio Stradivari.

46. Part of a Halloween dinner? : HOT TAMALES
Hot Tamales are a cinnamon candy made by Just Born. They look like red versions of the other Just Born candy called Mike and Ike. That’s no coincidence as Hot Tamales were developed as a way to make use of rejected Mike and Ike candy. The dark red color and intense cinnamon flavor was added to the Mike and Ike rejects, masking the original flavor and color.

51. Something found on a chemist’s table : ELEMENT
Dmitri Mendeleev was a Russian chemist. When Mendeleev classified elements according to their chemical properties, he noticed patterns and was able to group elements into his famous 1869 Periodic Table. So powerful was his table that he actually predicted the properties of some elements that had not even been discovered in 1869. Element number 101 is mendelevium and was named after Mendeleev.

53. “Battling Bella” of ’70s politics : ABZUG
Bella Abzug was one of the leader’s of the Women’s Movement that founded the National Women’s Political Caucus in 1971. She was elected to the US Congress the same year, helped by a famous campaign slogan “This woman’s place is in the House – the House of Representatives”.

56. Part of a Halloween dinner? : TOOTSIE ROLL
Tootsie Rolls were developed by an Austrian candymaker called Leo Hirschfeld in New York City in 1896. Hirschfeld named the candy after his daughter, who had the nickname “Tootsie”.

62. Stagehand : GRIP
On a film set, grips are lighting and rigging technicians who set up the infrastructure that supports lights, cameras etc. The “key grip” is the leader of the whole team. The first “grips” were technicians that worked in circuses in its early days. The name “grip” possibly comes from the bags called grips. in which the technicians carried their tools.

63. Part of the alloy britannium : TIN
Britannia metal (also called “britannium”) is an alloy made from 92% tin, 6% antimony and 2% copper. Britannia metal is a type of pewter.

65. What a colon represents in an emoticon : EYES
An emoticon is a glyph created using text characters to represent facial features, and usually oriented sideways. The emoticon is designed to indicate emotion or attitude. The classic example is the smiley face 🙂

66. Heart chart: Abbr. : ECG
An EKG measures electrical activity in the heart. Back in my homeland of Ireland, an EKG is known as an ECG (for electrocardiogram). We use the German name in the US, Elektrokardiogramm, giving us EKG. Apparently the abbreviation EKG is preferred as ECG might be confused (if poorly handwritten, I guess) with EEG, the abbreviation for an electroencephalogram.

Down
1. Fast-food chain with a smiling star in its logo : CARL’S JR
The Carl’s Jr. fast-food restaurant chain was founded in 1941 by Carl Karcher. Karcher’s first restaurant was a full-service establishment called Carl’s Drive-In Barbeque. He then built on his first success by opening a chain of smaller restaurants with a smaller menu, and called them simply “Carl’s”, which was changed to Carl’s Jr. in 1954.

7. Jedi Council leader : YODA
Yoda is one of the most beloved characters in the “Star Wars” series of films. Yoda’s voice was provided by the great modern-day puppeteer Frank Oz of “Muppets” fame.

8. Basil-based sauces : PESTOS
The term “pesto” applies to anything made by pounding. What we tend to know as “pesto” sauce is more properly called “pesto alla genovese”, pesto from Genoa in northern Italy.

10. Lotion inits. : SPF
In theory, the sun protection factor (SPF) is a calibrated measure of the effectiveness of a sunscreen in protecting the skin from harmful UV rays. The idea is that if you wear a lotion with say SPF 20, then it takes 20 times as much UV radiation to cause the skin to burn than it would take without protection. I say just stay out of the sun …

11. Bob and others : HAIRDOS
A “bob cut” is a short hairstyle in which the hair is cut straight around the head, at about the line of the jaw. Back in the 1570s a “bob” was the name given to a horse’s tail that was cut short, and about a century later it was being used to describe short hair on humans. The style became very popular with women in the early 1900s (as worn by actress Clara Bow, for example), with the fashion dying out in the thirties. The style reemerged in the sixties around the time the Beatles introduced their “mop tops”, with Vidal Sassoon leading the way in styling women’s hair in a bob cut again. Personally, I like it …

13. Pastes used in Middle Eastern cuisine : TAHINIS
“Tahini” is the Arabic name for the paste made from ground sesame seeds. Tahini is a major ingredient in hummus, one of my favorite dishes.

19. Publisher’s ID : ISBN
The International Standard Book Number (ISBN) was invented by one Gordon Foster who is now a professor at Trinity College Dublin in Ireland. The code was originally developed for booksellers, so that they had a unique number (and now a barcode) for each publication.

21. Pizzeria owner in “Do the Right Thing” : SAL
“Do the Right Thing” is a Spike Lee movie, released in 1989. Much of the action in the film is centered on a local pizzeria called “Sal’s” owned by Italian-American Salvatore Frangione (played by Danny Aiello).

26. Jet : EBON
Ebony is another word for the color black (often shortened to “ebon” in poetry). Ebony is a dark black wood that is very dense, one of the few types of wood that sinks in water. Ebony has been in high demand so the species of trees yielding the wood are now considered threatened. It is in such short supply that unscrupulous vendors have been known to darken lighter woods with shoe polish to look like ebony, so be warned …

The color “jet black” takes its name from the minor gemstone known as jet. The gemstone and the material it is made of take their English name from the French name “jaiet”.

34. Thick, sweet liqueur : CREME
A crème liqueur is a liqueur that actually contains no cream at all, even though “crème” is the French for “cream”. Instead, a crème liqueur is one in which a lot of sugar has been added in order to create a consistency near to that of syrup. Example of crème drinks are crème de cacao and crème de menthe.

36. “Jeopardy!” column : CATEGORY
“Jeopardy!” first went on the air in 1964, and is another successful Merv Griffin creation. But it took the introduction of Alex Trebek as host in order to bring the show into the big times. Trebek has been host since 1984.

38. First pope : ST PETER
According to the Christian tradition, Saint Peter was the first pope, and was crucified on the orders of Emperor Nero in Rome. Many hold that he requested to be crucified upside down as he felt that he was unworthy to have the same fate as Jesus Christ.

40. Savory deep-fried pastry : RISSOLE
A rissole is a small croquette covered in pastry or breadcrumbs that is baked or deep-fried. The filling may be sweet or savory although is usually some minced meat or fish.

44. Spare wear : G-STRING
The origins of “G-string”, the type of revealing underwear, is unclear. However, the term “geestring” has been used since the 1800s and originally referring to the string that held the loincloths worn by Native Americans.

48. Org. with a snake in its logo : AMA
American Medical Association (AMA)

The icon known as the caduceus is a staff around which are twisted two serpents and which has two wings at the top. The caduceus was carried by the Greek god Hermes. The traditional symbol for the medical profession was the rod of Asclepius, a Greek god associated with healing and medicine. The rod of Asclepius is similar to the caduceus, being a staff with a single serpent-entwined. Some medical organizations use the caduceus as a symbol, apparently due to confusion that dates by to the its mistaken use by the US Army Medical Corps in 1902.

50. Billiards trick shot : MASSE
In billiards, a massé shot is one in which the cue ball makes an extreme curve due to the player imparting heavy spin on the ball with his or her cue.

59. Groovy music? : LPS
The first vinyl records designed to play at 33 1/3 rpm were introduced by RCA Victor in 1931, but were discontinued due to quality problems. The first Long Play (LP) 33 1/3 rpm disc was introduced by Columbia Records many years later in 1948, with RCA Victor following up with a 45 rpm “single” the following year, in 1949.