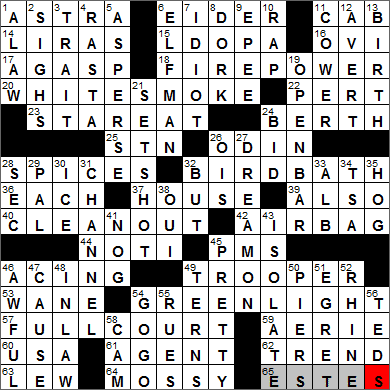 CROSSWORD SETTER: Robert Cirillo
THEME: Front of House … today’s themed answers are made up from two words, each of which can precede the word HOUSE:

Today’s Wiki-est, Amazonian Googlies
Across
1. “Ad ___ per aspera” (Kansas’ motto) : ASTRA
The motto of the State of Kansas is “ad astra per aspera”, a Latin expression meaning “to the stars through difficulties”. Kansas shares the same motto with quite a few other institutions, including an English grammar school, an Australian high school, and even Starfleet, the service to which the USS Enterprise belongs in the “Star Trek” series.

6. Fine pillow stuffing : EIDER
Eiders are large sea ducks. Their down feathers are used to fill pillows and quilts, giving the name to the quilt called an “eiderdown”.

14. Turkish money : LIRAS
The word “lira” is used in a number of countries for currency. “Lira” comes from the Latin for “pound” and is derived from a British pound sterling, the value of a Troy pound of silver. For example, the lira (plural “lire”) was the official currency of Italy before the country changed over to the euro.

15. Parkinson’s treatment : L-DOPA
L-3,4-DihydrOxyPhenylAlanine, thankfully can be shortened to L-DOPA. Swedish scientist Arvid Carlsson won a Nobel Prize for showing that L-DOPA could be used to reduce the symptoms of Parkinson’s Syndrome.

20. Sign of change at the Vatican : WHITE SMOKE (White House & smokehouse)
A new pope is elected in a papal conclave, a meeting of the College of Cardinals of the Roman Catholic church. After each round of voting, the individual ballots are burned. If the ballot is inconclusive, then the ballots are burned with a chemical (originally, damp straw was used) so that the resulting smoke is black. The smoke can be seen by crowds gathered near the Sistine Chapel where the conclave is held. If the ballot has resulted in a pope being selected, then the individual ballots are burned on their own so that they give off white smoke.

22. Prell rival : PERT
Prell and Pert are brands of shampoo.

26. Chief Norse god : ODIN
In Norse mythology, Odin was the chief of the gods. Odin’s wife Frigg was the queen of Asgard whose name gave us our English term “Friday” (via Anglo-Saxon). Odin’s son was Thor, and his name gave us the term “Thursday”.

10 Downing Street is one of the most famous street addresses in the world and is the official London residence of the British Prime Minister. Although it may not look it on television, it’s a spacious pad, actually a larger house made by combining three older houses back in the 1700s. Although Number 10 has over one hundred rooms, they are mostly offices and reception rooms and the actual residence itself is quite modest. It was so modest that when Tony Blair came to power he opted to move himself and his family into the more spacious residence next door at Number 11, an apartment traditionally reserved for the Chancellor of the Exchequer (the UK equivalent of the Secretary of the Treasury). The succeeding Prime Minister, David Cameron, seemed to like the idea, because he now lives in Number 11 as well.

60. Network that aired “Monk” : USA
“Monk” is a comedy cop show in which the title character is an ex-San Francisco Police Department detective who is recovering from a nervous breakdown.

61. 007, for one : AGENT
James Bond was of course the creation of the writer Ian Fleming. Fleming “stole” the James Bond name from an American ornithologist. The number 007 was “stolen” from the real-life, 16th century English spy called John Dee. Dee would sign his reports to Queen Elizabeth I with a stylized “007” to indicate that the reports were for “her eyes only”.

63. Fictional detective ___ Archer : LEW
Lew Archer is a character in books by Ross Macdonald. Archer is a private detective based in Southern California. Macdonald chose the name as a homage to the character Miles Archer who was the murdered partner of Sam Spade in Dashiell Hammett’s “The Maltese Falcon”.

65. ___ Park, Colo. : ESTES
Estes Park is a town in a beautiful part of the US, in northern Colorado. Estes Park is home to the headquarters of Rocky Mountain National Park. My fire-fighting brother-in-law was based at that park, so I’ve visited and can attest that it is a gorgeous place to live. He lives in Omaha now. The geography in Omaha is a little different …

5. Bad-mouth : ASPERSE
To asperse is to spread false charges or make insinuations. The more common expression is “to cast aspersions”. “To asperse” comes from the Latin “aspergere” meaning “to sprinkle”. So, “to asperse” is also the term used when sprinkling holy water.

“Dharma & Greg” is a sitcom that aired from 1997 to 2002 on ABC. Greg and Dharma are a couple that married on their first date, despite being exact opposites in personality and upbringing.

8. Almost any character on “The Big Bang Theory” : DORK
I consider “dork” to be pretty offensive slang. It emanated in the sixties among American students and has its roots in another slang term, a term for male genitalia.

9. Fencing blade : EPEE
The épée that is used in today’s sport fencing is derived from the old French dueling sword. In fact, the the sport of épée fencing is very similar to the dualing of the 19th century. The word “épée” translates from French as “sword”.

10. Radio format : RAP
I guess the idea is that rap music might be the programming format chosen by a radio station.

28. Regulatory inits. since 1934 : SEC
The US Securities and Exchange Commision (SEC) enforces federal securities laws and regulates the securities industry. The SEC was created by the Securities Exchange Act of 1934. The first Chairman of the SEC was Joseph P. Kennedy, Sr., the father of future President Kennedy.

33. Priest’s garment : ALB
The alb is the white, neck-to-toe vestment worn by priests, usually with a rope cord around the waist. The term alb comes from “albus”, the Latin word for “white”.

34. Org. with a prohibited-items list : TSA
The Transportation Security Administration (TSA) was of course created in 2001, soon after the 9/11 attacks.

41. Yule libation : NOG
It’s not really clear where the term “nog” comes from although it might derive from the word “noggin”, which was originally a small wooden cup that was long associated with alcoholic drinks.

43. Quarantine : ISOLATE
The original use of our word “quarantine” back in the 1500s was as a legal term. A quarantine was the 40 days in which a widow had the legal right to reside in her dead husband’s house.

49. Shore fliers : TERNS
Terns are seabirds that are found all over the world. The Arctic Tern makes a very long-distance migration. One Arctic Tern that was tagged as a chick in Great Britain in the summer of 1982, was spotted in Melbourne, Australia just three months later. The bird had traveled over 14,000 miles in over those three months, an average of about 150 miles a day. Remarkable …

51. “Snowy” wader : EGRET
At one time the egret species was in danger of extinction due to excessive hunting driven by the demand for plumes for women’s hats.

52. ___ Valley, German wine region : RHINE
The river running through Germany that we know in English as the Rhine, is called “Rhein” in German.

54. ___ girl : GO-GO
Go-go dancing started in the early sixties. Apparently, the first go-go dancers were women at the Peppermint Lounge in New York City who would spontaneously jump up onto tables and dance the twist. It wasn’t long before clubs everywhere started hiring women to dance on tables for the entertainment of their patrons. Out in Los Angeles, the “Whisky a Go Go” club on Sunset Strip added a twist (pun intended!), as they had their dancers perform in cages suspended from the ceiling, creating the profession of “cage dancing”. The name “go-go” actually comes from two expressions. The expression in English “go-go-go” describes someone who is high energy, and the expression in French “a gogo” describes something in abundance.

56. Senators Cruz and Kennedy : TEDS
US Senator Ted Cruz served as Solicitor General for the state of Texas before heading to Washington. Cruz was appointed Solicitor General in 2003 at the age of 32, making him the youngest Solicitor General in the country. Famously, Cruz is an opponent of the Affordable Care Act and made a speech in 2013 in the US Senate on the subject that lasted for 21 hours and 19 minutes. It was the fourth longest speech in the history of the Senate.

58. Machine part : CAM
Cams are wheels found on the cam shaft of a car’s engine (and other machines). The cams are eccentric in shape rather than circular. The rotation of the cams causes the intake and exhaust valves of the cylinders to open and close.