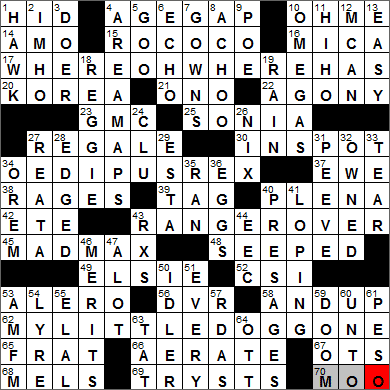 CROSSWORD SETTER: Ed Sessa,
THEME: The Dog at the End … four of today’s themed answer end with common names for dogs, and there is a whimsical line from a children’s song that refers to a dog as well:

Today’s Wiki-est, Amazonian Googlies
Across
14. “I love,” to Ovid : AMO
The Roman poet Publius Ovidius Naso is today known simply as Ovid. Ovid is usually listed alongside the two other great Roman poets: Horace and Virgil.

16. Mineral in thin sheets : MICA
Mica is a mineral, a sheet silicate. Thin sheets of mica are transparent and are used in place of glass in certain applications. This form of mica is called isinglass, and as it has a better thermal performance than glass it is a great choice for “peepholes’ in boilers and lanterns. Mica is also used in the electronics industry, making use of its unique electrical and thermal insulating properties.

17. With 62-Across, question in a children’s song : WHERE OH WHERE HAS
(62A. See 17-Across : MY LITTLE DOG GONE)
“Oh where, oh where has my little dog gone?” is a children’s song written by 19th-century American songwriter Septimus Winner. The song is also known as “Der Deitcher’s Dog”, and is made up from lyrics by Winner that he set to a German folk tune.

20. Seoul’s land : KOREA
Seoul is the capital city of South Korea. The Seoul National Capital Area is home to over 25 million people and is the second largest metropolitan area in the world, second only to Tokyo, Japan.

21. Yoko who loved John : ONO
John Lennon and Yoko Ono had a very public honeymoon in a hotels in Amsterdam and then Montreal, when they staged their famous “bed-in” for peace. In answering questions from reporters Lennon found himself often repeating the words “give peace a chance”. While still in bed, he composed his famous song “Give Peace a Chance” and even made the original recording of the song in the Montreal hotel room, with reporters present, and with a whole bunch of friends. The song was released later in 1969 and became a smash hit.

25. Justice Sotomayor : SONIA
Sonia Sotomayor is the first Hispanic justice on the US Supreme Court, and the third female justice. Sotomayor was nominated by President Barack Obama to replaced the retiring Justice David Souter.

34. *Sophocles tragedy : OEDIPUS REX
“Oedipus Rex” (also “Oedipus the King”) is a tragedy penned by the Ancient Greek playwright Sophocles. The play tells the story of Oedipus, a man who becomes king of Thebes. Famously, Oedipus was destined from birth to murder his father and marry his mother.

40. Full political assemblies : PLENA
“Plenum” (plural “plena”) is the name given to a complete legislative assembly under the parliamentary system, with the associated term of “quorum” being the minimum number of members required to be present to conduct business.

42. Summer: Fr. : ETE
One might spend the summer (été) under the sun (le soleil) in French-speaking countries.

43. *British luxury S.U.V. : RANGE ROVER
The Range Rover is the luxury version of the famous Land Rover made in England. The first Range Rover was produced in 1970, and the model is now in its fourth generation.

45. *Star-making title role for Mel Gibson : MAD MAX
“Mad Max” is a series of Australian movies starring Mel Gibson in the title role. Well, Gibson played the lead in the first three films and Tom Hardy plays Max in the fourth movie, which is currently in production.

49. ___ the Cow (Borden symbol) : ELSIE
Elsie the Cow is the mascot of the Borden Company. Elsie first appeared at the New York World’s Fair in 1939, introduced to symbolize the perfect dairy product. Elsie was also given a husband named Elmer the Bull. Elmer eventually moved over to the chemical division of Borden where he gave his name to Elmer’s Glue.

52. TV forensic series : CSI
The “CSI” franchise of TV shows has been tremendously successful, but seems to be winding down. “CSI: Miami” (the “worst” of the franchise, I think) was cancelled in 2012 after ten seasons. “CSI: NY” (the “best” of the franchise) was cancelled in 2013 after nine seasons. The original “CSI: Crime Scene Investigation”, set in Las Vegas, is still going strong, and has been doing so since 2000.

56. TiVo, for one : DVR
TiVo was introduced in 1999 and was the world’s first commercially successful DVR (Digital Video Recorder).

68. 1970s-’80s sitcom diner : MEL’S
The TV sitcom “Alice” ran from 1976 to 1985, a story about a widow named Alice who takes a job at Mel’s Diner. The show was based on a very successful 1974 movie called “Alice Doesn’t Live Here Anymore” directed by Martin Scorsese (his first Hollywood production) and starring Ellen Burstyn and Kris Kristofferson.

69. Secret get-togethers : TRYSTS
In its most general sense, a “tryst” is a meeting at an agreed time and place. More usually we consider a tryst to be a prearranged meeting between lovers. The term comes from the Old French “triste”, a waiting place designated when hunting.

9. “The Raven” writer : POE
“The Raven” is a narrative poem by Edgar Allen Poe that tells of a student who has lost the love of his life, Lenore. A raven enters the student’s bedchamber and perches on a bust of Pallas. The raven can talk, to the student’s surprise, but says nothing but the word “nevermore” (“quoth the raven, ‘Nevermore’”). As the student questions all aspects of his life, the raven taunts him with the same comment, “nevermore”. Finally the student decides that his soul is trapped beneath the raven’s shadow and shall be lifted “nevermore” …

10. Pricey watches : OMEGAS
Omega is a manufacturer of high-end watches based in Switzerland. An Omega watch was the first portable timepiece to make it to the moon.

11. Song syllables before “It’s off to work we go” : HI-HO
“Heigh-Ho” is one of the best known songs in the classic Disney animated feature “Snow White and the Seven Dwarfs”. “Heigh-Ho” is sung by the seven dwarfs as they head off to mine diamonds and rubies.

12. Thom ___ shoes : MCAN
Thom McAn footwear was introduced in 1922 by the Melville Corporation (now CVS Caremark). The brand was named after a Scottish golfer called Thomas McCann. The Thom McAn line is epitomized by the comfortable leather casual and dress shoe, so sales have really been hurt in recent decades by the growing popularity of sneakers.

13. “Duck soup” : EASY
The origins of the phrase “duck soup”, meaning anything easily done, aren’t very clear. However, it does at least date back to 1908.

18. Jackson a k a Mr. October : REGGIE
Former baseball player Reggie Jackson is known as “Mr. October” because of his memorable postseason performances.

24. Gulager of “The Last Picture Show” : CLU
Clu Gulager is a television and film actor. He is most remembered for playing Billy the Kid in the TV show “The Tall Man” in the early sixties, and then as Emmett Ryker in “The Virginian” in the late sixties.

The 1971 coming of age movie “The Last Picture Show” was directed by Peter Bogdanovich, and is based on the semi-autobiographical novel of the same name by Larry McMurtry. There’s a famous skinny-dipping scene in the film which caused some controversy soon after release, with the city of Phoenix actually banning the movie citing an Arizona obscenity statute. It took a federal court to determine that the film was not in fact obscene. I recommend this one …

“Veto” comes directly from Latin and means “I forbid”. The word was used by tribunes of Ancient Rome to indicate that they opposed measures passed by the Senate.

34. City near Provo : OREM
Orem, Utah was originally known as “Sharon” (a Biblical name), then “Provo Bench”, and in 1914 it was given the family name of a local railroad operator called “Orem”. Orem gave itself the nickname “Family City USA” and sure enough in 2010, “Forbes” rated Orem the 5th best place in the country to raise a family.

43. Doc’s written orders : RXS
There seems to some uncertainty about the origin of the symbol “Rx” that’s used for a medical prescription. One explanation is that it comes from the astrological sign for Jupiter, a symbol put on prescriptions in days of old to invoke Jupiter’s blessing to help a patient recover.

44. Common Market inits. : EEC
The European Economic Community (EEC) was also called “the Common Market”. The EEC was a NAFTA-like structure that was eventually absorbed into today’s European Union.

50. Aesop’s grasshopper, for one : IDLER
In Aesop’s fable “The Ant and the Grasshopper”, the grasshopper spends the warm months singing and having a good time while the ant toils away storing food. When winter arrives, the grasshopper starts to die from hunger and begs the ant for food. The ant tells the grasshopper that he should have been more sensible instead of singing away all summer, and maybe he should dance through the winter!

51. The “E” in EGBDF : EVERY
In the world of music, EGBDF are the notes on the lines of the treble clef. The notes are often remembered with a mnemonic such as “Every Good Boy Deserves Fudge”.

54. Apollo plucked it : LYRE
The lyre is a stringed instrument most closely associated with Ancient Greece, and with the gods Hermes and Apollo in particular. According to myth, Hermes slaughtered a cow from a sacred herd belonging to Apollo and offered it to the gods but kept the entrails. Hermes used the entrails to create the first lyre. Apollo liked the sound from the lyre and agreed to accept it as a trade for his herd of cattle.

55. Airline to Israel : EL AL
El Al Israel Airlines is the flag carrier of Israel. The term “el al” translates from Hebrew as “to the skies”.

60. “Do ___ others as …” : UNTO
The Golden Rule is also known as the ethic of reciprocity, and is a basis for the concept of human rights. A version of the rule used in the Christian tradition is attributed to Jesus: “Do unto others as you would have them do unto you”.

61. Cuban money : PESO
The coin called a “peso” is used in many Spanish-speaking countries around the world. The coin originated in Spain where the word “peso” means “weight”. The original peso was what we know in English as a “piece of eight”, a silver coin of a specific weight that had a nominal value of eight “reales”.