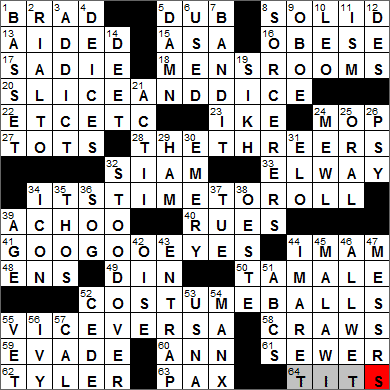 Today’s Wiki-est, Amazonian Googlies
Across
1. Actor Pitt : BRAD
Brad Pitt’s first major role was playing the cowboy hitchhiker in the 1991’s “Thelma and Louise”. Pitt’s life offscreen garners as much attention as his work onscreen, it seems. The tabloids revel in the series of high-profile relationships in which he has been involved. He was engaged to Gwyneth Paltrow for a while, married to Jennifer Aniston, and he now lives with Angelina Jolie.

5. Do a voice-over for, as a foreign-language film : DUB
If voices needed to be altered on the soundtrack of a film, that means double the work as there needs to be a re-recording. “Dub” is short for “double”, and is a term we’ve been using since the late 1920s.

15. Cute ___ button : AS A
We use the phrase “cute as a button” over here in North America. When I was growing up on the other side of the Atlantic, we said “bright as a button”. I believe both phrases have the same meaning.

17. ___ Hawkins Day : SADIE
Sadie Hawkins was a character in Al Capp’s comic strip “Li’l Abner”. Sadie was still a spinster at the age of 35 so declared a “Sadie Hawkins Day” in which she chased the local men in a footrace, with marriage as the prize when one was caught.

23. Eisenhower, affectionately : IKE
When the future president was growing up, the Eisenhower family used the nickname “Ike” for all seven boys in the family, as “Ike” was seen as an abbreviation for the family name. “Big Ike” was Edgar, the second oldest boy. “Little/Young Ike” was Dwight, who was the third son born. Dwight had no sisters.

28. School basics : THE THREE RS
The “three Rs” are Reading, ‘Riting and ‘Rithmetic.

33. Bronco great John : ELWAY
Former quarterback John Elway played his entire professional football career with the Denver Broncos. Elway now works as the executive vice president for football operations with the Broncos, which means he works for the team president directly, and that head coach John Fox reports to Elway.

48. 53-Down grad: Abbr. : ENS
Ensign is (usually) the most junior rank of commissioned officer in the armed forces. The name comes from the tradition that the junior officer would be given the task of carrying the ensign flag.

49. Ruckus : DIN
The word “ruckus” is used to mean a commotion, and has been around since the late 1800s. “Ruckus” is possibly a melding of the words “ruction” and “rumpus”.

50. Mexican dish sometimes described as “hot” : TAMALE
A tamale is a traditional dish from Central America composed of a starchy dough that is steamed or boiled in a wrapper made of leaves. The dough is called masa, and can include many different ingredients including meat, cheese fruit and vegetables.

“Hot tamale” is a slang term for a good-looking woman, and is also the name of a candy made by Just Born.

55. In the opposite order : VICE VERSA
“Vice versa” is a Latin phrase meaning “with position turned”. We always pronounce this term “incorrectly”. In Latin, a “c” is always a hard sound, and a “v” is pronounced like a “w”. The pronunciation should be something like “wee-kay wehr-sa”.

62. John who succeeded William Henry Harrison : TYLER
John Tyler was the tenth President of the US, and the first to take the office on the death of the incumbent. Tyler’s predecessor was President William Henry Harrison, who was in office only 32 days before he died of natural causes. For a while there was a little confusion about the wording in the constitution that covered such an eventuality. There was an argument made that Tyler would continue as Vice-President but would assume the responsibilities of the office of President, in effect as “Acting President”. However, Tyler proceeded as though he was taking over as President and took the oath of office in his hotel room in Washington. Soon afterwards, Congress declared that Tyler was indeed President, although many continued to dispute the fact. Many of President Tyler’s opponents referred to him as “His Accidency”.

President William Henry Harrison was the ninth President of the US. At 68 years of age, he was the oldest person to become president, until Ronald Reagan was elected to the office in 1981. President Harrison was also the first president to die in office, only 32 days after having been sworn in. His presidency was the shortest in history.

64. Small songbirds : TITS
The birds known as chickadees or titmice in North America, are usually called simply “tits” in the rest of the English-speaking world.

Down
1. Short-legged hound : BASSET
The Basset Hound wouldn’t be my favorite breed of dog, to be honest. Basset Hounds have a great sense of smell with an ability to track a scent that is second only to that of the Bloodhound. The name “Basset” comes from the French word for “rather low”, a reference to the dog’s short legs.

5. “___ Yankees” : DAMN
“Damn Yankees” is yet another version of the classic German legend of “Faust”, this time set in Washington, D.C. in the fifties. The show was written by Richard Adler and Jerry Ross, a production that turned out to be a very successful follow-up to their prior hit “The Pajama Game”. The future was looking really rosy for Adler and Ross until Jerry Ross died of an obstructive lung disease only a few weeks after “Damn Yankees” opened on Broadway in 1955. He was just 29 years old.

9. Instrument used to set the pitch for an orchestra : OBOE
The oboe is perhaps my favorite of the reed instruments. The name “oboe” comes from the French “hautbois” which means “high wood”. When you hear an orchestra tuning before a performance you’ll note (pun intended!) that the oboe starts off the process by playing an “A”. The rest of the musicians in turn tune to that oboe’s “A”.

10. Novelist Tolstoy : LEO
The Russian author Leo Tolstoy is best known for his novels “War and Peace” and “Anna Karenina”. He also wrote the celebrated novellas “Hadji Murad” and “The Death of Ivan Ilyich”.

11. Suffix with capital or Marx : -ISM
Marxism is the political and economic philosophy espoused by Karl Marx and Friedrich Engels in the mid-to-late 1800s. The main tenet of Marxism is that bourgeois suppression of lower classes in a capitalistic society inevitably leads to a socialist and ultimately classless society.

12. ___ Moines, Iowa : DES
The city of Des Moines is the capital of Iowa, and takes its name from the Des Moines River. The river in turn takes its name from the French “Riviere des Moines” meaning “River of the Monks”. It looks like there isn’t any “monkish” connection to the city’s name per se. “Des Moines” was just the name given by French traders who corrupted “Moingona”, the name of a group of Illinois Native Americans who lived by the river. However, others do contend that French Trappist monks, who lived a full 200 miles from the river, somehow influenced the name.

14. Bug spray ingredient : DEET
DEET is short for N,N-diethyl-meta-toluamide, an active ingredient in insect repellents. DEET is most often used to repel mosquitoes by applying it to the skin and/or clothing. It is also used to protect against tick bites.

19. One of an Indian minority : SIKH
Sikhism is a religion that was founded in the 15th century in the Punjab region, which straddles the India-Pakistan border. Even though Sikhism was established relatively recently, it is now the fifth-largest organized religion in the world.

30. Fingernail file : EMERY
Emery is a very hard type of rock that is crushed for use as an abrasive. Emery paper is made by gluing small particles of emery to paper. Emery boards are just emery paper with a cardboard backing. And emery boards are primarily used for filing nails.

35. Pres. Jefferson : THOS
Thomas Jefferson was a very close friend of John Adams, a friendship dating back to the time of the Second Continental Congress. Jefferson and Adams developed differing views on important subjects and had many debates, both directly and in correspondence. They also had an “up and down” relationship, with long periods of coolness. The two former presidents both died on the same day, in 1826. If that isn’t an amazing enough coincidence, they passed away on July 4th, Independence Day.

37. Wed. preceder : TUE
The name “Tuesday” comes from an Old English word that translates as “Tiw’s Day”. In turn, “Tiw” was the Old English name for the Norse god “Týr”. Týr was the Norse god of single combat, victory and heroic glory.

39. 18, e.g., as a minimum for voting : AGE
The minimum age of voters was called out in the US Constitution when it was passed in 1787. This was set at 21 years, and of course applied to only white male property owners. The minimum age of voters was lowered in the Twenty-sixth Amendment to the Constitution in 1971 as a response to student activism. Young people at that time were frustrated that they were mature enough to be drafted to fight in the Vietnam War, yet were not considered mature enough to vote in elections.

42. French river : OISE
The River Oise rises in Belgium and joins up with the River Seine just outside Paris.

44. Turkish inn : IMARET
Imarets were inns or hostels used by pilgrims throughout the Ottoman Empire. The network of imarets was set up to provide food to anyone in need, so also served as “soup kitchens”.

45. African land whose name consists of three state postal abbreviations : MALAWI
Malawi is in southeast Africa and is one of the least-developed countries in the world. The Malawi population has a low life expectancy and a high infant mortality rate. HIV/AIDS is a major killer. The British colonized the area in 1891, at which point it was called Nyasaland. Malawi became independent in 1964.

The name of the nation Malawi is made up of three US-state postal abbreviations (MA-LA-WI): MA (Massachusetts), LA (Louisiana) and WI (Wisconsin).

53. Annapolis inst. : USNA
The United States Naval Academy (USNA) is located in Annapolis, Maryland. The USNA was founded in 1845 and educates officers for the US Navy and the US Marine Corps. The motto of the USNA is “Ex Scientia Tridens”, which translates as “From Knowledge, Sea Power”.

54. Tailless cat : MANX
I’ve seen Manx cats by the dozen on their native island. They’re found all over the Isle of Man (hence the name “Manx”) located in the middle of the Irish Sea. Manx cats have no tails, they really don’t …