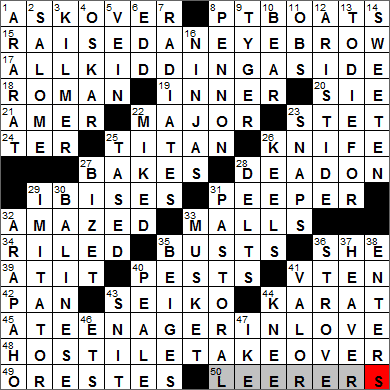 Today’s Wiki-est, Amazonian Googlies
Across
8. W.W. II vessels : PT BOATS
PT boats were motor torpedo boats: small speedy vessels that used torpedoes as their primary weapon against large surface ships. The “PT” stands for “Patrol Torpedo”. The most famous PT boats that served during WWII were probably PT-41 that carried General Douglas MacArthur and his family from Corregidor to Mindanao in his escape from the Philippines, and PT-109 that was commanded by Lieutenant John F. Kennedy, future President of the United States.

18. ___ Empire : ROMAN
Ancient Rome went through three distinct periods. From 753 to 509 BC, Rome was a kingdom, founded by the legendary Romulus. The Roman Republic lasted from 509 to 27 BC. The Republic started with the overthrow of the last monarch, Lucius Tarquinius Superbus, and replacement by two elected consuls who were advised by a senate. The Republic evolved over time, but came to an end when Octavian expanded his power and declared himself “First Citizen”, and effectively became Rome’s first Emperor and took the name Caesar Augustus. The Western Roman Empire collapsed in the 5th century. The Eastern Roman Empire survived as the Byzantine Empire that was centered on Constantinople.

23. Leave in : STET
“Stet” is a Latin word meaning “let it stand”. In editorial work, the typesetter is instructed to disregard any change previously marked by writing the word “stet” and then underscoring that change with a line of dots or dashes.

24. Rx specification : TER
“Ter” is the Latin word for “three”, commonly used in the medical world on prescriptions as part of the expression “ter in die”. “Ter in die” is Latin for “three times a day”, abbreviated to “TID”. “Bis in die” (BID) would be twice a day, and “quater in die” (QID) would be four times a day.

29. Relatives of spoonbills : IBISES
The ibis is a wading bird that was revered in ancient Egypt. “Ibis” is an interesting word grammatically speaking. You can have one “ibis” or two “ibises”, and then again one has a flock of “ibis”. And if you want to go with the classical plural, instead of two “ibises” you would have two “ibides”!

35. Works at a museum, say : BUSTS
A bust is a sculpture of the upper torso and head. We imported the term from Italy, where the word “busto” means “upper body”.

40. Gnats and mosquitoes : PESTS
Gnats are attracted to the smell of rotting food, and to vinegar. Simple homemade traps that use vinegar are often constructed to attract and kill gnats.

Most mosquitoes feed nectar in flowers and plant juices. The females of many mosquito species have mouthparts that can pierce the skin of animals to suck their blood. The female needs the nutrients from the blood in order to lay eggs.

42. Pipe holder? : PAN
In Greek mythology, Pan was a lecherous god, one who fell in love with Echo the mountain nymph. Echo refused Pan’s advances so that he became very angry. Pan’s anger created a “panic” (a word derived from the name “Pan”) and a group of shepherds were driven to kill Echo. Pan is often depicted playing his pan flute.

43. Watch brand once worn by 007 : SEIKO
Seiko Epson is a Japanese company, one of the largest manufacturers of printers in the world. The company has its roots in the watch business, roots that go back to 1942. Seiko was chosen as the official timekeeper for the 1964 Summer Olympics in Tokyo and was asked to supply a timer that produced a printed record. This request brought Seiko into the business of printer production. The company developed the world’s first mini-printer for the 1964 Games and called it EP-101 (EP standing for Electronic Printer). In 1975 Seiko introduced the next generation of EP printers which was called EPSON, from “SON of EP”. Cute, huh?

44. One of 24 : KARAT
A karat (also “carat”, the spelling outside of North America) is a measure of the purity of gold alloys, with 24-karat representing pure gold.

49. Euripides tragedy : ORESTES
Orestes is a character appearing in Greek mythology, and is the subject of several Ancient Greek plays.

Euripides was a great playwright of Ancient Greece, renowned for his tragedies. Euripides was one of the three great writers of tragedy of classical Athens, alongside Aeschylus and Sophocles.

50. Satyrs, say : LEERERS
The satyrs of Greek mythology came with a very high sex drive. They are the “rude” male subjects drawn on the side of old Greek vases. The nubile maidens known as nymphs were often an object of attention for the satyrs.

Down
1. Mountains of ___ (Genesis locale) : ARARAT
Mount Ararat is in Turkey. Ararat is a snow-capped dormant volcano with two peaks. The higher of the two, Greater Ararat, is the tallest peak in the country. Ararat takes its name from a legendary Armenian hero called Ara the Beautiful (or Ara the Handsome). According to the Book of Genesis, Noah’s ark landed on Mount Ararat as the Great Flood subsided.

3. “Trees” poet : KILMER
The American journalist and poet Joyce Kilmer is primarily known for his 1913 poem titled “Trees”. The original text of the poem is:

“The Spy Who Came in From the Cold” is an espionage novel by British author John le Carré. This is my favorite spy novel of all time. I’m also a big fan of the 1965 movie adaptation starring Richard Burton and Claire Bloom …

6. Hall-of-Fame outfielder Roush : EDD
Edd Roush was a big hitter who played Major League Baseball, starting in 1913 for the Chicago White Sox. He jumped ship to the Federal League in 1914, a league set up to compete with the already well-established National and American Leagues. The upstart league only lasted a couple of seasons. When Edd Roush passed away in 1988 at the age of 94, he was the last surviving player from the short-lived Federal League.

9. Blake’s “burning bright” cat : TYGER
William Blake was an English poet and artist, considered now have been a powerful force in his fields during the Romantic Age. One of Blake’s more famous poems is “The Tyger”, which has the celebrated lines:

10. Pessimist : BEAR
The terms “bull” and “bear” markets come from the way in which each animal attacks. A bull thrusts his horns upwards (an “up” market), whereas a bear swipes with his paws downward (a “down” market).

12. Three-time Haitian president : ARISTIDE
John-Bertrand Aristide is a Haitian native. When he was 29 years old he entered the priesthood, after having studied in Italy, Greece and Israel. He served as a priest in Haiti under the brutal regimes of François “Papa Doc” Duvalier and his son, Jean-Claude “Baby Doc”. Aristide became an outspoken critic of the dictators, and many times incurred their wrath. While still a priest, he was elected to the office of president, in the country’s first democratic election. Aristide was also an outspoken critic of the church, and in 1994 left the priesthood, getting married 12 months later.

16. Warriors with supposed powers of invisibility and shapeshifting : NINJAS
The ninjas were around in Japan at the time of the samurai, but were a very different type of warrior. The ninjas were covert operatives, specializing in the use of stealth to accomplish their missions. As they were a secretive cadre they took on a mystical reputation with the public, who believed they had the ability to become invisible or perhaps walk on water.

25. Put a charge into? : TASED
Victor Appleton wrote a novel for young adults called “Tom Swift and His Electric Rifle”. The company that developed the TASER electroshock weapon named its product as a homage to the novel. The acronym TASER stands for “Thomas A. Swift’s Electric Rifle”. Interesting, eh?

28. Workout targets, informally : DELTS
The deltoid muscle is actually a group of muscles, the ones that cover the shoulder and create the roundness under the skin. The deltoids are triangular in shape resembling the Greek letter delta, hence the name.

30. Long-haired cat breed : BALINESE
The Balinese breed of domestic cat is also known as the Longhaired Siamese. The Balinese is a breed selected by humans, and has nothing to do with Bali. The breed was developed by selecting long-haired kittens from Siamese litters and breeding them.

32. Fox relative : ARAPAHO
The Arapaho tribe lived on the eastern plains of Colorado and Wyoming. The Arapaho traditionally wintered in small camps in the foothills of the Rockies, and then relocated to plains in the spring where they hunted the buffalo that were gathering to give birth to their young.

The Sacs are a group of Native Americans, who probably originated in the northeast along the St. Lawrence River. Over time, they migrated south and west, and after a turbulent journey ended up on reservations in Oklahoma. The Meskwaki tribe is also known as the Fox, and had similar origins as the Sacs, and similar migrations. The two tribes eventually merged into the Sac and Fox Nation.

40. “Positive thinking” pioneer : PEALE
Norman Vincent Peale was the author of the bestseller “The Power of Positive Thinking”.

46. “Captain Video” figures, for short : ETS
“Captain Video and his Video Rangers” is a sci-fi television series that originally aired from 1949 to 1955. That’s a lot of episodes as 5-6 shows were produced a week. Sadly, only a few episodes have survived.

47. ’50s politico : IKE
When the future president was growing up, the Eisenhower family used the nickname “Ike” for all seven boys in the family, as “Ike” was seen as an abbreviation for the family name. “Big Ike” was Edgar, the second oldest boy. “Little/Young Ike” was Dwight, who was the third son born. Dwight had no sisters.