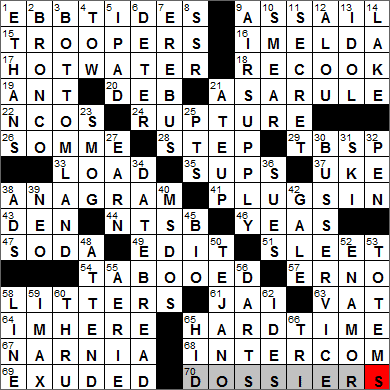 CROSSWORD SETTER: Vic Fleming & Bonnie L. Gentry
THEME: Two Lines … each of today’s themed answers is made from two words, both of which can precede LINE:

Today’s Wiki-est, Amazonian Googlies
Across
16. Staunton of Harry Potter movies : IMELDA
Imelda Staunton is a favorite actress of mine. Nowadays Staunton is known for playing Prof. Dolores Jane Umbridge in the “Harry Potter” series of films. I’ve seen/heard her many times on radio shows, TV shows and movies that I don’t think had much exposure in North America, but one of Staunton’s more powerful performances was the title role in the 2004 film “Vera Drake”.

20. Girl in a ball gown : DEB
Deb is short for “debutante”, which translates from French as “female beginner”.

22. M.Sgt. and others : NCOS
A master sergeant (MSgt) is a non-commissioned officer (NCO).

26. Amiens’s river : SOMME
The Somme is a river in the north of France. The name “Somme” comes from a Celtic word meaning “tranquility”. Paradoxically, the Somme is remembered as the site of a devastating WWI battle. The river separated British and French forces from the German army from July to November 1916. By the end of the battle, over one million soldiers had been wounded or killed.

37. Luau instrument, informally : UKE
The ukulele originated in the 1800s and mimicked a small guitar brought to the Hawaiian Islands by Portuguese immigrants.

44. Crash-probing agcy. : NTSB
The National Transportation Safety Board (NTSB) is responsible for the investigation of major accidents involving transportation. Included in this broad definition is the transportation of fluids in pipelines. The organization is independent in that it has no ties to other government agencies or departments so that its investigations can be viewed as “impartial”. The NTSB also earns a little money for the US as it hires out its investigation teams to countries who don’t have the necessary resources available on their own soil.

51. Wintry mix : SLEET
Apparently “sleet” is a term used to describe two weather conditions. One is a shower of ice pellets, smaller than hail, and the second is a mixture of rain and snow, with the snow melting as it falls. It’s the second definition that I have always used …

54. Made illicit : TABOOED
The word “taboo” was introduced into English by Captain Cook in his book “A Voyage to the Pacific Ocean”. Cook described “tabu” (likely imitative of a Tongan word that he had heard) as something that was both consecrated and forbidden.

57. Puzzle inventor Rubik : ERNO
What was originally called the “Magic Cube” became better known as Rubik’s Cube, named for its inventor Ernő Rubik. Rubik’s Cube is the world’s biggest selling puzzle game, with over 350 million sold in just over 30 years.

61. ___ alai : JAI
Even though jai alai is often said to be the fastest sport in the world because of the speed of the ball, in fact golf balls usually get going at a greater clip.

67. Aslan’s home : NARNIA
“The Chronicles of Narnia” is a series of children’s fantasy novels that were written by C. S. Lewis between 1949 and 1954. Most of the books are about a group of children from the real world in the magical kingdom of Narnia.

In the C. S. Lewis books, Aslan is the name of the lion character (as in “The Lion, the Witch and the Wardrobe”). “Aslan” is actually the Turkish word for lion. Anyone who has read the books will recognize the the remarkable similarity between the story of Aslan and the story of Christ, including a sacrifice and resurrection.

70. F.B.I. files : DOSSIERS
What we know today as the FBI was set up in 1908 as the BOI, the Bureau of Investigation. The name was changed to the Federal Bureau of Investigation in 1935. The Bureau was set up at the behest of President Theodore Roosevelt. President Roosevelt was largely moved to do so after the 1901 assassination of President McKinley, as there was a perception that anarchists were threatening law and order. The FBI’s motto uses the organization’s acronym, and is “Fidelity, Bravery, Integrity”.

Down
1. Frome and others : ETHANS
“Ethan Frome” is a novel by New York and Massachusetts author Edith Wharton, first published in 1911. Wharton started “Ethan Frome” as a composition in French that she wrote while studying the language in Paris.

2. It’s more useful when it’s busted : BRONCO
A “bronco” (also “bronc”) is a horse that is untamed. In Mexican Spanish “bronco” is a word for “horse”, and in the original Spanish “bronco” means “rough, rude”.

5. Jobs announcement of 2010 : IPAD
Steve Jobs certainly was a business icon in Silicon Valley. I don’t think it is too surprising to learn that the brilliant Jobs didn’t even finish his college education, dropping out of Reed College in Oregon after only one semester. Steve Jobs co-founded Apple in 1976, but in 1985 he was basically fired from his own company during the computer sales slump of the mid-eighties. Jobs then founded NeXT Computer, a company focused on supplying workstations to the higher education and business markets. Apple purchased NeXT in 1996, and that’s how Jobs found himself back with his original company.

Boris Yeltsin was elected as the first President of the Russian Soviet Federative Socialist Republic in 1991, at a time when Mikhail Gorbachev was President of the Soviet Union. When Gorbachev resigned, and the Soviet Union collapsed, Yeltsin emerged with his position intact. Yeltsin was re-elected in 1996, but his popularity declined in the late 1990s as the populace became discouraged with the country’s economic troubles and with political corruption.

12. Name of three Giants outfielders in 1963 : ALOU
Jesus Alou played major league baseball, as did his brothers Matty and Felipe, and as does Felipe’s son, Moises.

“American Idol” is a spin-off show that was created after the amazing success of the British television show “Pop Idol”. I can’t abide either program(me) …

14. The Caspian Sea, as often classified : LAKE
The Caspian Sea is a landlocked sea lying between Asia and Europe. By some definitions, the Caspian is the largest lake on the planet. The name “Caspian” comes from the Caspi people who lived to the southwest of the sea in South Caucasus.

23. Urban haze : SMOG
“Smog” is of course a portmanteau word formed by melding “smoke” and “fog”. The term was first used to describe the air around London in the early 1900s.

31. One of a biathlete’s pair : SKI
A biathlon is an event requiring expertise in two sporting disciplines. The most common biathlon is the winter sport that combines cross-country skiing with rifle shooting. This traditional biathlon was born out of an exercise for soldiers in Norway.

32. Where to do 65-Across : PEN
“Pen” is a slang term for “penitentiary”. Back in the early 1400s, a penitentiary was a place to do “penance”, a place of punishment for offences against the church.

39. Intro to conservatism? : NEO-
By definition, a neoconservative supports the use of American power and military to bring democracy, liberty, equality and human rights to other countries.

40. Early I.B.M. PC standard : MS-DOS
MS-DOS was the main operating system used by IBM-compatible PCs in the eighties and for much of the nineties.

42. Sayers portrayed in “Brian’s Song” : GALE
Gale Sayers is a former NFL running back in the sixties and seventies. Sayers was famously supportive of his fellow chicago Bear Brian Piccolo, who was stricken with cancer. The friendship between the players was portrayed in a 1971 movie called “Brian’s Song”.

50. Selena’s music style : TEJANO
Tejano is the Spanish word for “Texan”. Tejano music is strongly influenced by Cajun culture, because of the proximity of Texas to Louisiana. The other strong influence came with immigrants from Poland and what is now the Czech Republic. These immigrants brought with them the waltz, polka … and the accordion.

Singer Selena Quintanilla-Perez, known professionally simply as “Selena”, was murdered in 1995 by the president of her own fan club at the height of her career. In a 1997 biopic about Selena’s life, Jennifer Lopez played the title role.

53. Tribal emblems : TOTEMS
Totem poles are large sculptures that have been carved from trees. Totem poles are part of the culture of Native Americans in the Pacific Northwest of North America.

59. Immersive film format : IMAX
The IMAX Corporation, which is behind the IMAX film format, is a Canadian company. The impetus for developing the system came after Expo ’67 in Montreal. Back then large format screenings were accomplished using multiple projectors with multiple screens, with images basically stitched together. The team behind the IMAX technology set out to simplify things, and developed a single-camera, single-projector system.

65. Camouflaged : HID
Our term “camouflage” evolved directly from a Parisian slang term “camoufler” meaning “to disguise”. The term was first used in WWI, although the British navy at that time preferred the expression “dazzle-painting”.