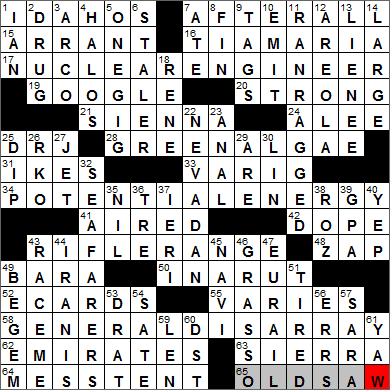 17A. Many a Manhattan Project worker : NUCLEAR ENGINEER
28A. Growth on wet rocks or the surface of stagnant water : GREEN ALGAE
34A. What a coiled spring or charged battery has, in physics : POTENTIAL ENERGY
43A. Targeted area? : RIFLE RANGE

Today’s Wiki-est, Amazonian Googlies
Across
1. Some tubers : IDAHOS
Idaho is also sometimes called the Potato State due to the popularity of potatoes as a crop. Idaho produces almost one-third of all potatoes grown in the country.

15. Unqualified : ARRANT
“Arrant” means “out-and-out, complete”, and is a variant of “errant”.

17. Many a Manhattan Project worker : NUCLEAR ENGINEER
The Manhattan project was of course the joint US-Canada-UK project to develop an atomic bomb during WWII. Initially, the Army headquarters for the program was located on the 18th floor of a building on Broadway in New York City. Eventually, because of that first location, the project adopted the name “Manhattan”.

19. Search for, in a way : GOOGLE
The search engine “Google” was originally called “BackRub” would you believe? The name was eventually changed to Google, an intentional misspelling of the word “googol”. A googol is a pretty big number, 10 to the power of 100. That would be the digit 1 followed by 100 zeros.

21. Brown shade : SIENNA
The shade of “sienna” was originally a pigment made from earth found around Siena in Tuscany.

24. Toward safety : ALEE
“Alee” is the direction away from the wind. If a sailor points into the wind, he or she is pointing “aweather”.

25. One on One: ___ vs. Larry Bird (old video game) : DR J
Julius Erving is a retired professional basketball player who was known as “Dr. J”, a nickname he picked up in high school. Dr. J was a trailblazer in many ways, being the first player associated with slam dunking and other moves above the rim.

Larry Bird played basketball for the Boston Celtics from 1978 to 1992. Bird has a lot of very loyal fans, and some might even be described as fanatical. In 2005 an Oklahoma City man was convicted of a crime involving a shooting. On being sentenced to 30 years imprisonment, the guilty man requested that the sentence be changed to 33 years so that it matched the number on Larry Bird’s jersey. The judge obliged …

42. Skinny : DOPE
The use of the word “skinny” meaning information, comes from WWII military slang for “the truth”, probably a derivative of the expression “the naked truth” (and skinny-dipping).

Our use of the word “dope” to mean “inside information” probably comes from horse racing. The idea is that a better might have information about which horse has been drugged (doped) to influence its performance.

49. Silents sex symbol : BARA
Theda Bara was a silent film star from Cincinnati, Ohio. Many cite Bara as the first movie sex symbol. She wore very revealing costumes in many of her films and she often played the femme fatale character. As such, Bara’s nickname was “the Vamp”.

62. Dubai-based airline : EMIRATES
Emirates is the largest airline in the Middle East, and operates out of Dubai International Airport in the United Arab Emirates. Four of the Emirates non-stop commercial routes are the longest in the world, namely Dubai to Los Angeles, San Francisco, Dallas/Fort Worth and Houston.

64. Private dining area? : MESS TENT
“Mess” first came into English about 1300 and described the list of food needed for a meal, from the Old French word “mes” meaning a portion of food or a course at a meal. This usage in English evolved into “mess” meaning a jumbled mass of anything from the concept of “mixed food”. At the same time, the original usage in the sense of a food for a meal surfaced again in the military in the 1500s when a “mess” was a communal eating place.

65. Maxim : OLD SAW
A “saw” is an old saying, one that is often repeated and is very familiar. The term “old saw” is actually a tautology, as by definition a “saw” is “old”.

3. Using the bow, in music : ARCO
“Arco” is a musical direction instructing a string player to return to normal bowing technique after a passage played using some other technique (perhaps pizzicato).

The iPod Nano is the successor to the iPod Mini and was introduced to the market at the end of 2005. There have been seven versions of the Nano to date and the current Nano as well as playing tunes is an FM player, records voice memos, has a pedometer and can connect with external devices (like a heart monitor, maybe) using Bluetooth technology.

9. Auto necessities : TAGS
Automobile tags are license plates. The informal term “tag” is actually the name of the small sticker that is issued annually to indicated that vehicle registration is current.

13. Name on a property deed, maybe : LIENEE
A lien is the right that one has to retain or secure someone’s property until a debt is paid.

18. Surrealist Magritte : RENE
Belgian artist René Magritte was a surrealist. His most recognized work maybe is “The Son of Man”, a painting he created as a self-portrait. It is the work that shows a man in a bowler hat with his face covered by an apple. The image features prominently in the great movie, the 1999 remake of “The Thomas Crown Affair”.

26. 1929’s “Street Girl” was its first official production : RKO
The RKO Pictures studio was formed when RCA (RADIO Corporation of America) bought the KEITH-Albee-ORPHEUM theaters (and Joe Kennedy’s Film Booking Offices of America). The RKO acronym then comes from the words “Radio”, “Keith” and “Orpheum”.

27. Deep black : JET
The color “jet black” takes its name from the minor gemstone known as jet. The gemstone and the material it is made of takes its English name from the French name: “jaiet”.

29. “The Way I ___” (2007 Timbaland hit) : ARE
“Timbaland” is the stage name of rapper and record producer Timothy Zachery Mosley. Mosley was given the Timbaland nickname as a play on the Timberland brand of boot.

30. Architectural designer of New York’s Museum for African Art : LIN
Maya Lin is a Chinese American born in Athens Ohio, and is an artist and architect. Her most famous work is the moving Vietnam Veterans Memorial in Washington, D.C. Lin was only 21-years-old when she won a public design competition in 1981 to create the memorial. Although her design is very fitting, sadly Lin was not a popular choice for the work given her Asian heritage. As she said herself, she probably would not have been picked had the competition been judged with the knowledge of who was behind each submission.

New York’s Museum for African Art is now known as the New Africa Center. The museum is temporarily closed in anticipation of a move to a new building on “Museum Mile” in Manhattan.

32. Vikings, e.g. : SEAFARERS
The Vikings were a Germanic people from northern Europe who were noted as great seafarers. Key to the success of the Vikings was the design of their famous “longships”. Made from wood, the longship was long and narrow with a shallow hull, It was also light, so that the crew would actually carry it small distances over land and around obstacles. Longships were designed to be propelled both by sail and by oars.

36. Nickname for a junior’s junior : TRE
Trey (also “Tre”) is a common nickname for someone in a family who is of the third generation to have a particular name. For example, billionaire Bill Gates has the full name of William Henry Gates III and is known to many family members as “Trey”.

38. Cartoonist Chast : ROZ
Roz Chast had her first cartoon published in “The New Yorker” in 1978, and has had more than 800 published since then.

45. Language of Pandora : NAVI
In the James Cameron epic “Avatar”, the “blue people” are the Na’vi, the indigenous species that lives on the lush moon called Pandora. The main Na’vi character featuring in the film is the female Neytiri. According to Cameron, Neytiri was inspired by the Raquel Welch character in the movie “Fantastic Voyage” and the comic book character Vampirella.

46. Richard ___, former chief of the N.Y.S.E. : GRASSO
Richard Grasso is a former chief of the New York Stock Exchange (NYSE), having held his post there from 1995 to 2003. Grasso’s name became quite prominent outside of Wall Street in the wake of the 2001 September 11 terrorist attacks. He has been praised for the role that he played in bring the NYSE back into operation after that terrible day.

47. Continental pass name : EURAIL
In my days as a student, the way to backpack around Europe was using a Europass. Nowadays that is known as a Eurail pass. The Eurail pass gives you access to most trains (and some shipping lines) right across the continent.

51. Like chestnuts : TIRED
An “old chestnut” is a joke that is “well worn”. The origin of the expression is very specific. It dates back to a play by William Diamond, first produced in 1816. In the story, one of the characters keeps telling the same joke over and over, with minor variations. The joke is about a cork tree, and an exasperated listener after hearing the joke one time too many refutes the use of the cork tree saying, “A Chestnut. I have heard you tell the joke 27 times and I’m sure it was a Chestnut!”

57. “The poet in my heart,” per a Fleetwood Mac song : SARA
Fleetwood Mac was founded in 1967 in London. The band was started by Peter Green, and he chose the name from two friends in former bands (named Fleetwood and McVie). This is despite the fact the drummer’s name happens to be Mick Fleetwood.

60. 48 U.S. states observe it: Abbr. : DST
On the other side of the Atlantic, Daylight Saving Time (DST) is known as “summer time”. The idea behind summer/daylight-savings is to move clocks forward an hour in spring and backwards in the fall so that afternoons have more daylight.

61. Ship’s departure? : YAW
The word “yaw” means to deviate from the line of a course and is used mainly at sea. “Yaw” is derived from the Old Norse word “jaege” which means “to drive, chase”. As such, “yaw” is etymologically related to our word “yacht”.