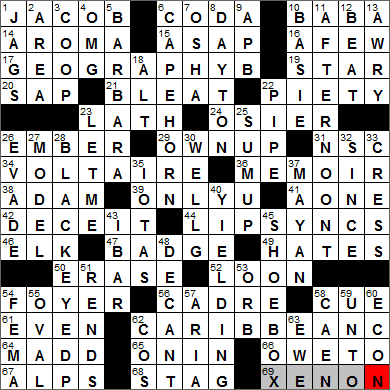 CROSSWORD SETTER: Bernice Gordon … a belated Happy Birthday wish to Bernice, who celebrated her 100th birthday on Saturday last. Bernice has had over 140 puzzles published in the “New York Times”, over a 60-year crossword-setting career!
THEME: Letter End … today’s themed answers each end with a letter, a letter that is replacing a similar sounding word:

Today’s Wiki-est, Amazonian Googlies
Across
1. Furrier John ___ Astor : JACOB
John Jacob Astor was the father of the famous American Astor dynasty. He was the country’s first multi-millionaire, making his fortune in the trade of fur, real estate and opium. In today’s terms, it has been calculated that by the time of his death he has accumulated a fortune big enough to make him the fourth wealthiest man in American history (in the company of the likes of Andrew Carnegie, Cornelius Vanderbilt, Bill Gates, Henry Ford and John D. Rockefeller).

6. Musical closing : CODA
In music, a coda is primarily a passage that brings a movement to a conclusion. “Coda” is Italian for “tail”.

10. Rum-soaked cake : BABA
Rum baba (also “baba au rhum” in French) is a small yeast cake saturated in rum, and sometimes filled with whipped cream. Rum baba is derived from the recipe for the tall “babka” yeast cake that was introduced to the world by the Polish communities. The Polish words “baba” and “babka” mean “old woman” or “grandmother” in English. I guess someone must have thought that all grandmothers were saturated in rum!

15. Request under deadline : ASAP
As soon as possible (ASAP)

Back in 18th-century America, when neighbors would gather to work for the benefit of one of their group, such a meeting was called a “bee”. The name “bee” was an allusion to the social nature of the insect. In modern parlance, a further element of entertainment and pleasure has been introduced, for example in a “quilting bee”, or even a “spelling bee”.

19. Kansas City daily : STAR
“The Kansas City Star” is a newspaper that was first published in 1880 as “The Kansas City Evening Star”. The paper had two notable employees in the early 1900s. Future President harry S. Truman worked in the mailroom for a couple of weeks in 1902, and author Ernest Hemingway was a reporter “The Star” from 1917 to 1918.

20. Sustenance for aphids : SAP
Aphids are called “greenfly” back in the British Isles where I come from. The most effective way to control aphids in my experience is to make sure there are plenty of ladybugs in the garden (called ladybirds in Ireland!).

23. Narrow wood strip : LATH
The words “lath” and “lattice” have the same root in Old French. Laths are thin strips of wood that are nailed across a frame forming a backing to which plaster can be applied to finish a wall.

24. Willow tree : OSIER
Most willows (trees and shrubs of the genus Salix) are called just that, willows. Some of the broad-leaved shrub varieties are called sallow, and the narrow-leaved shrubs are called osier. The variety known as osier is commonly used in basketry, as osier twigs are very flexible.

31. White House advisory grp. : NSC
The National Security Council (NSC) was created by President Harry S. Truman in 1947. The NSC is chaired by the sitting president and meets in the White House Situation Room.

34. Philosopher who wrote “It is difficult to free fools from the chains they revere” : VOLTAIRE
Voltaire was the pen name of French writer and philosopher François-Marie Arouet. He chose the name “Voltaire” as it is an anagram of “Arovet Li”, the Latinized spelling of his family name “Arouet”.

36. “Angela’s Ashes,” for one : MEMOIR
“Angela’s Ashes” is a Pulitzer-winning memoir by Frank McCourt. It tells of McCourt’s upbringing in an impoverished family in Limerick in the west of Ireland.

38. West of “Batman” : ADAM
Adam West is the actor who played the title role in the sixties TV series “Batman”. These days you might hear West as the voice of a character called “Adam West” on the animated show “Family Guy”. Back in 1970, West was offered the role of James Bond in the movie “Diamonds are Forever”, but he turned it down!

46. Rocky Mountain ___ : ELK
The Rocky Mountain Elk population has been facing a serious threat since 2010, a disorder called Chronic Wasting Disease (CWD). CWD is similar to BSE (so called “mad-cow disease”) and affects the brain tissue of the infected elk.

49. Causes of glowers : HATES
A “glower” is an angry or sullen look.

52. Wacko : LOON
The slang term “loon” for a deranged person probably comes from the loud cry of the bird called the loon, but it is also influenced by the word “lunatic”.

54. Lobby : FOYER
“Foyer”, meaning “lobby”, is a French word that we’ve imported into English. In French, “foyer” is used for what we would call a “green room”, a place where actors can gather when not on stage or on set.

56. Inner circle : CADRE
A “cadre” is most commonly a group of experienced personnel at the core of a larger organization that the small group trains or heavily influences. “Cadre” is a French word meaning a “frame”. We use it in the sense that a cadre is a group that provides a “framework” for the larger organization.

62. Environs for Blackbeard : CARIBBEAN C (i.e. “Caribbean Sea”)
The Caribbean Sea takes its name from the Carib people. The Caribs are an American Indian people that live in the Lesser Antilles islands, part of the West Indies.

Blackbeard was the nickname of the celebrated English pirate Edward Teach who plied his trade around the West Indies and up and and down the North American coast.

67. Home of the Brenner Pass : ALPS
The Brenner Pass is one of the main mountain passes through the Alps, and is located along the border between Austria and Italy. The name “Brenner” comes from “Prenner”, the name of a nearby farm and its owner. There is a motorway that goes through the pass today, but it is renowned for the long traffic jams that build up especially when northern Europeans are heading to the Mediterranean for summer vacation.

69. Arc lamp gas : XENON
Metal halide lamps that are called xenons don’t actually rely on the incorporated xenon gas to generate light. The xenon gas is added so that the lamp comes on “instantly”. Without the xenon, the lamp would start up rather like a street lamp, flickering and sputtering for a while before staying alight.

Down
1. Sprees : JAGS
The word “jag” is used to describe periods of unrestrained activity, particularly involving alcohol, and has been in use since the 1800s.

4. “Horrors!,” in texts : OMG
OMG is text-speak for Oh My Gosh! Oh My Goodness! or any other G words you might think of …

5. Newswoman Walters : BARBARA
The broadcast journalist and TV personality Barbara Walters saw her career take off when she wrote and produced stories for NBC’s “The today Show” in 1962. She was quite dedicated to the job, and once even modeled a swimsuit on the show after the model who was booked failed to show. In 1976, Walters became the first female to co-anchor an evening news program, working alongside Harry Reasoner on the “ABC Evening News”.

6. Southern tip of South America : CAPE HORN
Cape Horn is sometimes cited as the most southerly point of South America, In fact, that honor goes to the Águila Islet of the Diego Ramirez Islands. Cape Horn is however the northern point of the Drake Passage that was used by sailing ships to pass between the Pacific and Atlantic Oceans. The use of the Drake Passage fell off with the opening of the Panama Canal in 1914.

7. Factory-inspecting org. : OSHA
The Occupational Safety and Health Administration (OSHA) was created in 1970 during the Nixon administration. OSHA regulates workplaces in the private sector and regulates just one government agency, namely the US Postal Service.

9. Manhunt letters : APB
An All Points Bulletin (APB) is a broadcast from one US law enforcement agency to another.

10. Count of music : BASIE
“Count” Basie’s real given name was “William”. Count Basie perhaps picked up his love for the piano from his mother, who played and gave him his first lessons. Basie’s first paying job as a musician was in a movie theater, where he learned to improvise a suitable accompaniment for the silent movies that were being shown.

12. Shellac : BEAT
“To shellac” is a slang term meaning “to defeat decisively, to strike severely”.

18. Cover girl Carol : ALT
Carol Alt is a model from Queens, New York. Alt’s big break came when was featured on the cover of the 1982 “Sports Illustrated Swimsuit Issue”.

22. Hookah, e.g. : PIPE
A hookah is a waterpipe, a device for smoking tobacco in which the smoke is passed through a water basin before it is inhaled.

54. Org. that prepares flood maps : FEMA
Federal emergency management has been structured for over 200 years, but what we know today as the Federal Emergency Management Agency (FEMA) was created in 1979 in an Executive Order issued by President Jimmy Carter.

57. Andrea Bocelli offering : ARIA
Andrea Bocelli is a classically-trained tenor who sings popular music, a so-called cross-over artist. Bocelli was born with poor eyesight and then became totally blind at the age of 12 when he had an accident playing soccer.

58. Battle of Normandy locale : CAEN
Caen, on the River Orne, lies in the Calvados department of France in the northwest of the country. Caen is famous for the WWII Battle of Caen that left the town practically destroyed. Caen is also the burial place of the Norman King William I of England, also known as William the Conqueror after his victory at the Battle of Hastings in 1066.

59. Golden rule preposition : UNTO
The Golden Rule is also known as the ethic of reciprocity, and is a basis for the concept of human rights. A version of the rule used in the Christian tradition is attributed to Jesus: