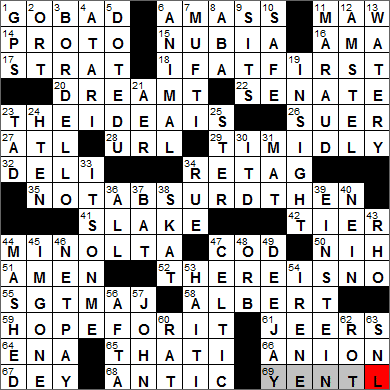 15. Nile Valley region : NUBIA
Nubia is a region shared by Egypt and Sudan that lies along the Nile river. The name “Nubia” comes from the Nuba people who settled in the area in the 4th century.

17. Classic Fender guitar, for short : STRAT
The Stratocaster is an electric guitar made by Fender since 1954. The company that made Fender electric guitars was founded in Fullerton, California in 1946 by Leo Fender.

20. Did some woolgathering : DREAMT
“Wool gathering” is an expression meaning “daydreaming”.

22. Body of 100 : SENATE
The six-year terms enjoyed by US senators are staggered, so that every two years about one third of the US Senate seats come up for reelection.

26. One on “Judge Judy” : SUER
“Judge Judy” of television fame is actually Judith Sheindlin, a retired family court judge from New York. Ms. Sheindlin’s contract was renewed in the middle of 2010, so that she now earns $45 million per year taping her show. That’s a tad more than she was earning on the “real” bench I think …

29. In the manner of a milquetoast : TIMIDLY
Someone described a “milquetoast” is particularly weak and timid. The term comes from a character called Caspar Milquetoast in the comic strip “The Timid Soul” drawn by H. T. Webster. Webster came up with Caspar’s name by deliberately misspelling “milk toast”, which is a bland food that is suitable for someone with a weak stomach.

32. Bagel and lox purveyor : DELI
The word “delicatessen” (or “deli” for short) came into English from the German “Delikatessen”. The Germans borrowed the word from French, in which language “délicatesse” means “delicious things (to eat)”. The term’s ultimate root is “delicatus”, the Latin for “giving pleasure, delightful”.

Lox is a cured salmon fillet, finely sliced. The term “lox” comes into English via Yiddish, and derives from the German word for salmon, namely “Lachs”.

41. Quench : SLAKE
“To slake” is to satisfy a craving, as in slaking one’s thirst.

44. Bygone Japanese camera brand : MINOLTA
Minolta was a Japanese manufacturer of cameras and related products. Minolta was founded in 1928 to make cameras using imported German technology. One of the company’s most memorable products was the world’s first integrated autofocus 35mm SLR camera. Minolta merged with Konica in 2003, forming Konica Minolta.

55. High-ranking noncom: Abbr. : SGT MAJ
An NCO is a non-commissioned officer in the armed forces. Usually such an officer is one who has earned his or her rank by promotion through the enlisted ranks. A good example would be a sergeant.

58. With 39-Down, speaker of this puzzle’s quote : ALBERT
(39. See 58-Across : EINSTEIN)
After Albert Einstein moved to the US in 1933, he became quite a celebrity and his face was readily recognizable. Einstein was frequently stopped in the street by people who would naively ask him if he could explain what “that theory” (i.e. the theory of relativity) was all about. Growing tired of this, he finally learned to tell people that he was sorry, but folks were constantly mistaking him for Albert Einstein!

64. “Bambi” deer : ENA
Ena is Bambi’s aunt in the 1942 Disney film “Bambi”. The movie is based on the novel “Bambi, A Life in the Woods” written by Austrian author Felix Salten and first published in 1923.

67. Susan of “L.A. Law” : DEY
The actress Susan Dey first appeared on “The Partridge Family” when she was 17-years-old when she had no acting experience. Years later, Dey won a Golden Globe for playing the leading role of Grace Van Owen in “L. A. Law”.

68. Shenanigan : ANTIC
I suppose one could be forgiven for thinking that “shenanigan” is an Irish term. Apparently the word is of uncertain derivation, coined in San Francisco and Sacramento, California in the mid-1800s.

69. Cross-dressing role for Streisand : YENTL
“Yentl” is a play that opened in New York City in 1975. The move to adapt the play for the big screen was led by Barbara Streisand, and indeed she wrote the first outline of a musical version herself as far back as 1968. The film was eventually made and released in 1983, with Streisand performing the lead role.

Down
1. Many 16-Across members : GPS
General practitioner (GP)

4. Asteroids game maker : ATARI
I remember being really addicted to the Atari video arcade game called “Asteroids” back in the early eighties. Apparently I wasn’t the only one, as “Asteroids” turned out to be Atari’s best selling game of all time.

5. End of an academic 28-Across : DOT EDU
The .edu domain was one of the six original generic top-level domains specified. The complete original list is:

7. G.I.’s civvies : MUFTI
“Mufti” is civilian dress that is worn by someone who usually wears a uniform. The term is probably related somehow to the Arabic “mufti”, the word for a Muslim scholar who interprets Islamic law.

12. Dutch brew : AMSTEL
Amstel is a Dutch beer and brewery, founded in 1870 in Amsterdam. The brewery takes its name from the Amstel river which runs through the city.

23. Smidgen : TAD
A tad is a small boy, with the term possibly coming from the word “tadpole”.

24. Coordinate in the game Battleship : H-TEN
Battleship was a game that we used to play as kids using pencil and paper. The game had been around at least since WWI, and was eventually turned into a board game by Milton Bradley in 1967.

38. Trick-taking game : SKAT
When I was a teenager in Ireland, I had a friend with a German father. The father taught us the game of Skat, and what a great game it is. Skat originated in Germany in the 1800s and is to this day the most popular game in the country. I haven’t played it in decades, but would love to play it again …

40. Deutsch denial : NEIN
“Deutsch” is the German word for “German”.

43. Plato’s P : RHO
Plato was a Greek philosopher and mathematician. He was a student of the equally famous and respected Socrates, and Plato in turn was the teacher and mentor of the celebrated Aristotle.

44. Like the potatoes in shepherd’s pie : MASHED
Shepherd’s pie, also known as cottage pie, is one of my favorite dishes. It is a meat pie (although my wife makes a vegetarian version), with a crust made from mashed potato.

47. Larry Bird, during his playing days : CELTIC
Larry Bird played basketball for the Boston Celtics from 1978 to 1992. Bird has a lot of very loyal fans, and some might even be described as fanatical. In 2005 an Oklahoma City man was convicted of a crime involving a shooting. On being sentenced to 30 years imprisonment, the guilty man requested that the sentence be changed to 33 years so that it matched the number on Larry Bird’s jersey. The judge obliged …

49. Wedding hiree : DEEJAY
The world’s first radio disk jockey was one Ray Newby of Stockton, California who made his first broadcast in 1909, would you believe? When he was 16 years old and a student, he started to play his records on a primitive radio located in the Herrold College of Engineering and Wireless in San Jose. The records played back then were mostly recordings of Enrico Caruso.

53. Port-au-Prince’s land : HAITI
The capital city of Haiti is Port-au-Prince. The city was hit by a devastating earthquake in January of 2010. The official government estimate of the death toll stands at 230,000 people, with many bodies never recovered.

54. Pax’s Greek counterpart : IRENE
Eirene (also “Irene”) was the Greek goddess of peace, with “eirene” being the Greek word for “peace”. The Roman equivalent to Eirene was the goddess Pax.

56. Aqua Velva competitor : AFTA
Afta is an aftershave in the Mennen range of products that is owned by Colgate-Palmolive.

The Aqua Velva line of men’s toiletry products includes a famous aftershave. The first product in the line was Aqua Velva aftershave, which was introduced in 1929.

57. Lav : JOHN
The use of “john” as a slang term for a toilet is peculiar to North America. “John” probably comes from the older slang term of “jack” or “jakes” that had been around since the 16th century. In Ireland, in cruder moments, we still refer to a toilet as “the jacks”.