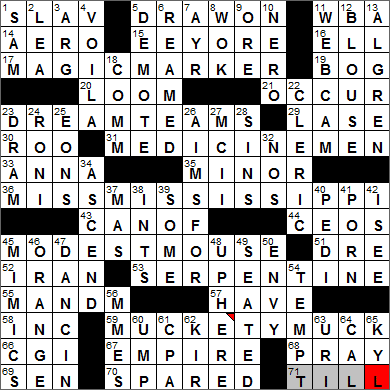 CROSSWORD SETTER: Bill Thompson
THEME: M&M Vowel Progression … today’s themed answers each are made up from two words that start with M, and the second letters progress through the vowels from the top of the grid to the bottom:

17A. Pen with a fat felt tip : MAGIC MARKER
31A. Aboriginal healers : MEDICINE MEN
36A. Annual Vicksburg pageant : MISS MISSISSIPPI
45A. Band with the 2007 #1 album “We Were Dead Before the Ship Even Sank” : MODEST MOUSE
59A. Pooh-bah : MUCKETY-MUCK

Today’s Wiki-est, Amazonian Googlies
Across
1. Czech or Pole : SLAV
The Slavic peoples are in the majority in communities covering over half of Europe. This large ethnic group is traditionally broken down into three smaller groups:

14. Commercial prefix with postale : AERO-
Aéropostale was a French aviation company founded in 1918 in Toulouse. When Aéropostale was founded, its focus was to be carrying mail, hence the name. The Aéropostale clothing retailer takes its name from the airline.

15. Pal of Pooh : EEYORE
Eeyore is the donkey character in A. A. Milne’s “Winnie-the-Pooh”. Eeyore is very lovable, but has a gloomy and pessimistic outlook on life.

29. Zap with light : LASE
The term “laser” comes from an acronym, “Light Amplification by Stimulated Emission of Radiation” (LASER). It has been pointed out that a more precise name for laser technology is “Light Oscillation by Stimulated Emission of Radiation”, but the resulting acronym isn’t quite so appealing, namely LOSER …

30. Pal of Pooh : ROO
Like most of the characters in A. A. Milne’s “Winnie the Pooh”, Roo was inspired by on a stuffed toy belonging to Milne’s son, Christopher Robin.

31. Aboriginal healers : MEDICINE MEN
Even though the term “aborigine” is often associated with the indigenous peoples of Australia, in the widest sense “aboriginal” refers to any indigenous race. The Aborigines were a people in Roman mythology, the oldest inhabitants of central Italy.

33. Writer Quindlen : ANNA
Anna Quindlen is an author, journalist and columnist who won the Pulitzer Prize for Commentary in 1992 for her “New York Times” column “Public and Private”.

36. Annual Vicksburg pageant : MISS MISSISSIPPI
Vicksburg, Mississippi is a city located about 40 miles west of Jackson, the state capital. Vicksburg sits on the Mississippi and Yazoo rivers. The city plays host to the Miss Mississippi Pageant and Parade every summer.

44. Board of directors hirees, for short : CEOS
Chief Executive Officer(CEO)

45. Band with the 2007 #1 album “We Were Dead Before the Ship Even Sank” : MODEST MOUSE
Modest Mouse is a rock band from Issaquah, Washington that formed in 1993. The name “Modest Mouse” comes from a Virginia Woolf story called “The Mark on the Wall” in which there is a passage:

I wish I could hit upon a pleasant track of thought, a track indirectly reflecting credit upon myself, for those are the pleasantest thoughts, and very frequent even in the minds of modest, mouse-coloured people, who believe genuinely that they dislike to hear their own praises.

51. Rap’s Dr. ___ : DRE
Dr. Dre is the stage name of rapper Andre Romelle Young. Dr. Dre is known for his own singing career as well as for producing records and starting the careers of others such Snoop Dogg, Eminem and 50 Cent.

55. Plain or peanut candy : M AND M
Forrest Mars, Sr. was the founder of the Mars Company. Forrest invented the Mars Bar while living over in England and then developed M&M’s when he returned to the US. Mars came up with the idea for M&M’s when he saw soldiers in the Spanish Civil War eating chocolate pellets. Those pellets had a hard shell of tempered chocolate on the outside to prevent them from melting. Mars got some of the funding to develop the M&M from William Murrie, the son of the president of Hershey’s Chocolate. It is the “M” and “M” from “Mars” and “Murrie” that give the name to the candy.

59. Pooh-bah : MUCKETY-MUCK
The term “pooh-bah”, meaning an ostentatious official, comes from the world of opera. Pooh-Bah is a character in the wonderful Gilbert & Sullivan comic opera “The Mikado”. Famously, Pooh-Bah holds many, many offices, including that of “Lord High Everything Else”.

67. What Darth Vader serves, with “the” : EMPIRE
Anakin “Ani” Skywalker is the principal character in all six of the “Star Wars” movies. His progress chronologically through the series of films is:

– Episode I: Anakin is a 9-year-old slave boy who earns the promise of Jedi training by young Obi-Wan Kenobi.
– Episode II: Anakin is 18-years-old and goes on a murdering rampage to avenge the killing of his mother.
– Episode III: Anakin is 21-years-old and a Jedi knight, but he turns to the Dark Side and becomes Darth Vader. His wife Padme gives birth to twins, Luke and Leia Skywalker.
– Episode IV: Darth Vader, comes into conflict with his children, Luke Skywalker and the Princess Leia.
– Episode V: Darth Vader attempts to coax his son Luke over to the dark side, and reveals to Luke that he is his father.
– Episode VI: Luke learns that Leia is his sister, and takes on the task of bringing Darth Vader back from the Dark Side in order to save the Galaxy. Vader saves his son from the Emperor’s evil grip, dying in the process, but his spirit ends up alongside the spirits of Yoda and Obi-Wan. They all live happily ever after …

68. “Let us ___” : PRAY
“Let us pray” (“Oremus” in Latin) is a phrase oft used in the Roman Catholic and some other Christian traditions.

Down
1. Cooke of soul : SAM
Sam Cooke was a soul singer from Clarksdale, Mississippi. Cooke is considered by many to have been one of the founders of the soul genre. Cooke’s impressive list of hits includes “You Send Me”, Chain Gang” and “Twistin’ the Night Away”. Cooke was only 33 years old when he died. He was shot after a drunken brawl by a motel manager in what was deemed by the courts to be a justifiable homicide.

3. Evita’s land: Abbr. : ARG
Argentina is the second largest country in South America (after Brazil), and geographically is the world’s largest Spanish-speaking nation. The name “Argentina” of course comes from the Latin “argentum”, the word for “silver”. It is thought that the name was given by the early Spanish and Portuguese conquerors who also named the Rio de la Plata (the “Silver River”). Those early explorers got hold of lots of silver objects that they found among the native population.

Eva Perón was the second wife of President Juan Perón who was in office from 1946 to 1955. The Argentine First Lady was known affectionately by the people as “Evita”, the Spanish language diminutive of “Eva”. “Evita” was also the follow-up musical to “Jesus Christ Superstar” for Andrew Lloyd Webber and Tim Rice, and was based on the life of Eva Perón.

6. Really chewed out : REAMED
I must admit that I find the slang term “to ream”, with its meaning “to scold harshly”, to be quite distasteful. The usage of the word as a reprimand dates back to about 1950.

7. Firth of Clyde port : AYR
Ayr is a port town on the Firth of Clyde in southwest Scotland. The famous poet Robert Burns was born just three miles from Ayr.

“Firth” is a word used in England and Scotland for an inlet, and tends to be used in the same way as “fjord” in Scandinavia.

8. Moo goo gai pan pan : WOK
“Wok” is a Cantonese word, the name of the frying pan now used in many Asian cuisines.

10. Peter on a piano : NERO
Peter Nero is a pianist and conductor of “pops” orchestral concerts. Nero had a huge hit in the pop music charts in 1971 with the theme tune from the movie “Summer of ’42”.

13. Nelson who wrote “The Man With the Golden Arm” : ALGREN
Nelson Algren was an author from Detroit who is best known today for his 1949 novel “The Man with the Golden Arm”. The famous novel won the National Book Award and was made into a celebrated 1955 film of the same name starring Frank Sinatra. Algren also wrote a novel called “A Walk on the Wild Side”, the title of which was used in a great 1972 Lou Reed song.

23. Apothecary unit : DRAM
In the obsolete apothecary’s system of weights, one dram is equivalent to 60 grains, or three scruples.

24. Rice-A-___ : RONI
Rice-a-Roni was introduced in 1958 by the Golden Grain Macaroni Company of San Francisco. The company was run by an Italian immigrant and his four sons. The wife of one of the sons served a pilaf dish at a family diner that was a big hit, so her brother-in-law created a commercial version by blending dry chicken soup mix with rice and macaroni. Sounds like “a San Francisco treat” to me …

37. More, in Madrid : MAS
Madrid is the largest city in Spain and the capital. Madrid is located very close to the geographical center of the country.

The acronym “NSFW” stands for “not safe/suitable for work”. I’ve never heard of the term, but apparently it’s Internet slang.

46. Actual color of an airplane’s black box : ORANGE
In the aviation industry, a “black box” is an audio or data recorder installed in an aircraft as an aid in the event that an accident investigation is necessary. The “black” box is actually bright orange, so that it is easier to find after an accident.

Bob Fosse won more Tony Awards for choreography than anyone else, a grand total of eight. He also won an Oscar for Best Director for his 1972 movie “Cabaret”, even beating out the formidable Francis Ford Coppola who was nominated that same year for “The Godfather”.

50. Green-eyed monster : ENVY
William Shakespeare was one of the first to associate the color green with envy. He called jealousy the “green-eyed monster” in his play, “Othello”.

62. Aperitif with white wine : KIR
Kir is a French cocktail, made by adding a teaspoon or so of creme de cassis (blackcurrant liqueur) to a glass, and then topping it off with white wine. The drink is named after Felix Kir, the Mayor of Dijon in Burgundy, who used to offer the drink to his guests. My wife (expensive tastes!) is particularly fond of a variant called a Kir Royale, in which the white wine is replaced with champagne.

63. State sch. in the smallest state : URI
The University of Rhode Island (URI) was first chartered as an agricultural school, back in 1888. URI’s main campus today is located in the village of Kingston.

65. Jon ____, former 69-Across from Arizona : KYL
Jon Kyl is a former US Senator from Arizona, serving from 1995 until his retirement in 2013. Kyl was also the Senate Minority Whip. He is the son of John Henry Kyl who served as the US Representative for the State of Iowa for many years. Kyl now works as a lobbyist.