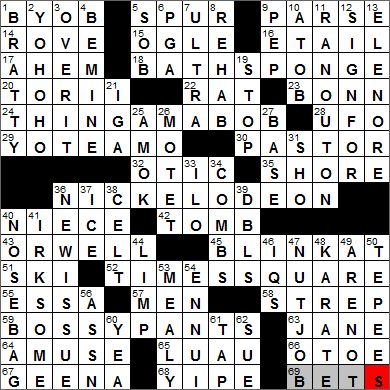 CROSSWORD SETTER: Sam Ezersky & Vic Fleming
THEME: Nick Star at the End … the last word of the themed answers spell out the name of the Nickelodeon character SPONGEBOB SQUAREPANTS:

9. Analyze, as a sentence : PARSE
The verb “to parse” means “to state the parts of speech in a sentence”. “Parse” comes from the Latin word “pars” meaning “part”.

14. Karl who advised Bush 43 : ROVE
Whatever your politics, you have to give Karl Rove credit for engineering both presidential election victories for President George W. Bush. Rove is a Christmas baby, born on December 25, 1950.

16. Amazon.com’s line : ETAIL
Amazon.com is the largest online retailer in the world. The company was founded in 1994 by Jeff Bezos, in his garage in Bellevue, Washington. I’m a big fan of Amazon’s approach to customer service …

20. Outfielder Hunter with nine Gold Gloves : TORII
Torii Hunter is Major League Baseball player with the Detroit Tigers. Hunter is known for “climbing the fence”, catching a ball at the extreme limits of the outfield and preventing a homerun.

23. European capital until 1990 : BONN
After WWII, Bonn was chosen as the capital of West Germany, a choice promoted by Chancellor Konrad Adenauer who was from the area. After German reunification, the capital was moved to Berlin.

29. Latin lover’s declaration : YO TE AMO
In Spanish, one might say “I love you” (you te amo) with flowers (con flores).

30. Manse occupant : PASTOR
A manse is a minister’s home in various Christian traditions. “Manse” derives from “mansus”, the Latin for “dwelling”. The term can also be used for any stately residence.

36. Channel for the character named by the ends of 18-, 24-, 52- and 59-Across : NICKELODEON
SpongeBob SquarePants is a cartoon character in a Nickelodeon television series. Spongebob first appeared in 1999, and he lives in a pineapple under the sea.

In the original television version of “The Addams Family”, the character called Uncle Fester was played by Jackie Coogan. In the first two adaptations for the big screen, Uncle Fester was portrayed by the talented Christopher Lloyd.

42. Mummy’s place : TOMB
We use the term “mummy” for a dead body that has been embalmed in preparation for burial, especially if done so by the ancient Egyptians. The term “mummy” comes from the Persian word “mumiyah” meaning “embalmed body”.

“Animal Farm” is the 1945 novella written by George Orwell, a satire of life in the Soviet Union under Joseph Stalin. Orwell had trouble getting his novel published in his homeland of the UK during WWII, as anti-Soviet literature wasn’t a good thing to publish while the UK and USSR were on the same side of a World War. In fact, one publisher who was willing to distribute the book changed his mind after being warned off by the British Ministry of Information. Given his experiences, I find it interesting that Orwell should write “Nineteen Eighty-Four” a few years later, and introduce the world to Big Brother.

51. Navigate a biathlon course, say : SKI
A biathlon is an event requiring expertise in two sporting disciplines. The most common biathlon is the winter sport that combines cross-country skiing with rifle shooting. This traditional biathlon was born out of an exercise for soldiers in Norway.

52. New Year’s Eve hot spot : TIMES SQUARE
The famous New Year’s Eve ball-dropping tradition in Times Square, New York started on January 1st 1908. The original time ball was lit with one hundred 25-watt light bulbs and was dropped at one second after midnight. A fifth version of the ball was introduced in 2008 for the centennial anniversary of the ceremony. The 2008 ball was built by Waterford Crystal and was lit by 9,567 LED bulbs that consumed the same amount of power as ten electric toasters. The current ball was used for the first time in 2009, and is double the size of the 2008 ball at 12 feet in diameter. The ball now sits atop Times Square year round, so you can go see it next time you are in town …

55. She, in Salerno : ESSA
Salerno is a port city on the southwest coast of Italy. In WWII, after the Italians negotiated a peace treaty with the Allies in 1943, the King of Italy relocated to Salerno from Rome. The new Italian government was set up in the city, and for a few months Salerno was “capital” of the country.

57. Lavatory sign : MEN
Our word “lavatory” originally referred to a washbasin, and comes from the Latin “lavatorium”, a place for washing. In the 1600s “lavatory” came to mean “washroom”, and in the 1920s “toilet”.

58. Throat bug, briefly : STREP
Streptococcus bacteria multiply and divide along a single axis so that they form linked chains. That behavior gives the genus of bacteria its name, as “streptos” is Greek for “easily twisted, like a chain”. I had a battle with streptococcal pharyngitis (strep throat) not too long ago and it was not at all pleasant, I must say. Another species of streptococcus is responsible for that terrible “flesh-eating” infection that makes the news from time to time.

59. 2011 Tina Fey autobiography : BOSSYPANTS
Comic actress Tina Fey has a scar on her face a few inches long on her left cheek, which I was shocked to learn was caused by a childhood “slashing” incident. When she was just five years old and playing in the front yard of her house, someone just came up to her and slashed her with a knife. How despicable!

63. One of a jungle couple : JANE
Jane Porter is the love interest in the “Tarzan” series of novels penned by Edgar Rice Burroughs. Famously, Jane was played by Maureen O’Sullivan on the big screen, opposite Johnny Weissmuller as Tarzan. However, in the movies Jane’s family name was changed from Porter to Parker. Also, Porter is an American in the books, and Parker is an Englishwoman in the films.

65. Occasion to eat poi : LUAU
Nowadays the word “luau” denotes almost any kind of party on the Hawaiian Islands, but to the purist a luau is a feast that always includes a serving of “poi”, the bulbous underground stems of taro baked with coconut milk.

66. Great Plains tribe : OTOE
The Native American people known as the Otoe were the first tribe encountered by the Lewis and clark Expedition. The meeting took place at a point on the Missouri River that is now known as Council Bluff.

67. Davis with a 1988 Oscar : GEENA
As well as being a successful Hollywood actress, Geena Davis is an accomplished archer and came close to qualifying for the US archery team for the 2000 Summer Olympics. Davis is also a member of American Mensa. She is quite the lady …

Down
2. Start of a pirate’s refrain : YO-HO-HO
The fictional sea shanty called “Dead Man’s Chest” was introduced in Robert Louis Stevenson’s great novel, “Treasure Island”. In the book, Stevenson only describes the chorus, which goes:

4. Candy heart request : BE MINE
The forerunner to Sweethearts candy was introduced in 1866, with the famous sayings written on the candy tailored for use at weddings. One of the original expressions was, “Married in pink, he will take a drink”. The original candy was a lot bigger, to fit all those words! The smaller, heart-shaped candy hit the shelves in 1901. We’ve been able to buy Sweethearts with the words “Text me” since 2010.

6. FedExCup org. : PGA
The FedExCup is a championship trophy that has been awarded since 2007 to golfers on the PGA Tour. Players win points throughout the season, with those earning the most points entering into playoff tournaments at the end of the season.

7. Michelob ___ (light brew) : ULTRA
Michelob Ultra is a diet beer that was introduced in 2002, a beer low in carbohydrates.

The Turtles were a Californian rock band active in the late sixties. The biggest hit for the Turtles was 1967’s “Happy Together”.

21. Supermarket franchise chain : IGA
IGA stands for Independent Grocers Alliance, a chain of supermarkets that extends right around the world. IGA’s headquarters is in Chicago.

25. In a frenzy : AMOK
The phrase “to run amok” (sometimes “to run amuck”) has been around since the 1670s and is derived from the Malay word for “attacking furiously”, “amuk”. The word “amok” was also used as a noun to describe Malay natives who were “frenzied”. Given Malaya’s troubled history, the natives probably had good reason for that frenzy …

26. Church choir song : MOTET
A motet is a simple musical composition based on a sacred text, usually sung without an accompaniment. The term “motet” is a diminutive of the French for “word” … “mot”.

31. “Homeland” network, for short : SHO
“Homeland” is a psychological drama shown on Showtime about a CIA officer who is convinced that a certain US Marine is a threat to the security of the United States. The show is based on a series from Israeli television called “Hatufim” (Prisoners of War”). I saw the first series of this show and highly recommend it …

33. U.N. workers’ agcy. : ILO
The ILO (International Labour Organization) is an agency now administered by the UN which was established by the League of Nations after WWI. The ILO deals with important issues such as health and safety, discrimination, child labor and forced labor. The organization was recognized for its work in 1969 when it was awarded the Nobel Peace Prize.

36. Initial public offering : NEW ISSUE
An Initial Public Offering (IPO) is the very first offer of stock for sale by a company on the open market. In other words, an IPO marks the first time that a company is traded on a public exchange. Companies have an IPO to raise capital to expand (usually).

38. Bill Russell or Larry Bird, briefly : CELT
Bill Russell is a retired basketball player who played for the Boston Celtics from 1956 to 1969. Russell also captained the gold medal-winning US national team at the 1956 Summer Olympics in Melbourne, Australia.

50. Homes for the 66-Across : TEPEES
A tepee (also written as “tipi” and “teepee”) is a cone-shaped tent traditionally made from animal hides that is used by the Great Plains Native Americans. A wigwam is a completely different structure and is often a misnomer for a tepee. A wigwam is a domed structure built by Native Americans in the West and Southwest, intended to be a more permanent dwelling. The wigwam can also be covered with hides but more often was covered with grass, reeds, brush or cloth.

54. Yawn inducer : ENNUI
“Ennui” is the French word for boredom, a word that we now use in English. It’s one of the few French words we’ve imported that we haven’t anglicized and actually pronounce “correctly”.