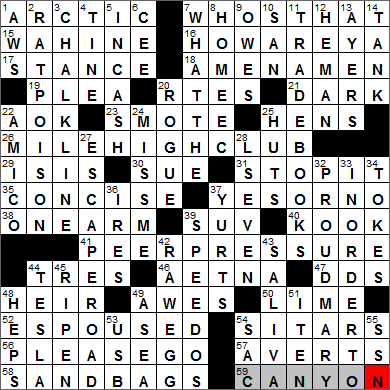 Announcement
The puzzle below is the one that was published online by the New York Times today. Due to a mix-up at the NYTimes, this Ian Livengood puzzle was printed in the paper a week ago. Follow this link to find the solution to the Kevin Der puzzle that was in the printed NYTimes today.

Today’s Wiki-est, Amazonian Googlies
Across
15. Miss out on a board : WAHINE
“Wahine” is the word for “woman”, in both Hawaiian and Maori.

In Hawaii, one might see a wahine on a surfboard.

18. Emphatic approval : AMEN AMEN!
The word “amen” is translated as “so be it”. “Amen” is said to be of Hebrew origin, but it is likely to be also influenced by Aramaic and Arabic.

22. Hunky-dory : A-OK
Our term “A-OK” is supposedly an abbreviation for “A(ll systems are) OK”, and arose in the sixties during the Space Program.

Surprisingly (to me), the term “hunky-dory” has been around a long time, and is documented back in the mid-1800s. No one is really sure of its origin, but some say it is an Anglicization of Honcho dori, that back in the day was a street of ill repute in Yokohama, Japan.

25. Birds in a clutch : HENS
A “clutch” is a brood of chickens. The term is also used for a set of eggs produced at one time.

26. Group that no one on earth has ever joined : MILE HIGH CLUB
To become a member of the “Mile High Club”, one must have sexual relations on an aircraft.

29. Sun disk wearer, in myth : ISIS
Isis was the ancient Egyptian goddess of fertility, as well as the protector of the dead and the goddess of children.

38. Feature of a certain bandit : ONE ARM
Slot machines earned the nickname “one-armed bandits” simply because they had “one arm”, the handle pulled to operate the machine, and they robbed you of all your money!

39. 20-Down, e.g. : SUV
(20D. Nissan ___ : ROGUE)
The term SUV, an acronym for Sports Utility Vehicle, was introduced by our marketing friends. Using the term Sports Utility Vehicle was a very clever way to get us to pay a lot of money for what was essentially a station wagon on a truck chassis, or at least it was back then.

44. “___ magnifique!” : TRES
I am not sure that one ever says “très magnifique” in French, as it would translate literally as “very magnificent”, which is a little redundant. The phrase “c’est magnifique” is quite common though.

46. Big employer in Hartford, Conn. : AETNA
When the health care management and insurance company known as Aetna was founded, the name was chosen to evoke images of Mt. Etna, the European volcano.

Hartford is the capitol of the state of Connecticut. The city is home to the headquarters of many insurance companies. As such Hartford is nicknamed the “Insurance Capital of the World”.

A DDS might work on a tooth’s root canal.

52. Public, as views : ESPOUSED
“To espouse” is to adopt or give support to.

54. Instruments played with mizraabs : SITARS
The sitar has been around since the Middle Ages. The sitar is a stringed instrument that is played by plucking, and is used most often in Hindustani classical music. In the West we have been exposed to the instrument largely through the performances of Ravi Shankar and some music by George Harrison of the Beatles, a onetime student of Shankar.

A “mizraab” is a metal plectrum that is used to play a sitar.

59. Ambush locale in Episode 1 of “The Lone Ranger” : CANYON
“The Lone Ranger” was both a radio and television show, dating back to its first radio performance in 1933 on a Detroit station. The line “Hi-yo, Silver! Away!” was a device used in the storyline to signal that a riding sequence was starting, so cue the music!

Down
2. Thallium sulfate, e.g. : RAT POISON
Thallium sulfate is a toxic chemical that is hard to detect, as it is colorless, odorless and tasteless. As such, one of its use is as a rat poison. However, it is so toxic that such use is banned in many countries.

6. Civic leader? : CEE
The leading letter in the word “leader” is the letter C (cee).

13. Australia’s ___ Rock : AYERS
Ayers Rock was discovered by Europeans in 1873, who gave it its name in honor of Sir Henry Ayers who was the Chief Secretary of South Australia at the time. The Aborigines call the landmark Uluru, the more accepted name these days.

27. Civil engineering safety feature : ESCAPE ROAD
An escape road is provided on a steep hill for a driver to use if his brakes fail. The escape road is usually quite short and straight, with a pile of sand or gravel at the end.

28. Square, in old slang, as indicated by forming a square with one’s hands : L-SEVEN
“Square” is a slang term, an insult implying that someone fails to appreciate a counterculture perhaps, is a “fuddy duddy”. The derivative term “L7” means the same thing. “L7” comes from the square-like gesture made by putting together an “L” with a thumb and index finger and a “7” with the other thumb and index finger.

32. 1969 hit with the repeated lyric “Big wheel keep on turnin'” : PROUD MARY
“Proud Mary” is a song written by John Fogarty and recorded in 1968 by Creedence Clearwater Revival with Fogarty singing lead vocals. The song was famously covered by Ike and Tina Turner in 1970. The “proud Mary” in the title is a riverboat, with a “big wheel” that keeps on turnin’.

34. Takes some hits : TOKES
“Toke” is a slang term for a puff on a marijuana cigarette or on a pipe containing the drug.

37. Humble dwellings : YURTS
A yurt is a wood-framed dwelling that is used by nomads in the steppes of Central Asia. Although a yurt is a substantial structure, it is of course extremely portable.

39. Short trunks : SPEEDOS
Speedo brand swimwear was first produced in Australia in 1928, by a hosiery company that wanted to diversify. The brand name was chosen after a slogan competition among employees was won by “Speed on in your Speedos”. It was a long time ago, I guess …

44. Weber per square meter : TESLA
The Tesla unit measures the strength of a magnetic field, and is named after the physicist Nikola Tesla. Nikola Tesla was born in Serbia, but later moved to the US. His work on mechanical and electrical engineering was crucial to the development of alternating current technology, the same technology that is used by equipment at the backbone of modern power generation and distribution systems.

51. Christopher Columbus Transcontinental Hwy. : I-TEN
I-10 is the most southerly of the interstate routes that crosses from the Atlantic to the Pacific. I-10 stretches from Santa Monica, California to Jacksonville, Florida. Various stretches of the route have been given different names, for example, the Rosa Parks Freeway, the Santa Monica Freeway, the San Bernardino Freeway and the Christopher Columbus Transcontinental Highway.

53. Kind of port : USB
Universal Serial Bus (USB) is an industry standard dealing with how computers and electronic devices connect and communicate, and deal with electrical power through those connections.