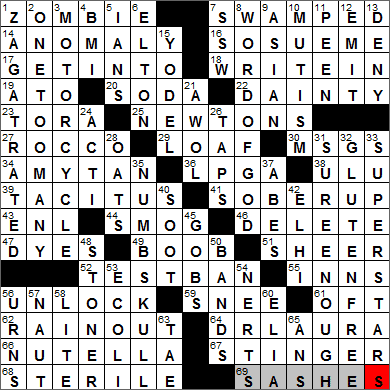 Today’s Wiki-est, Amazonian Googlies
Across
1. Body that doesn’t remain at rest? : ZOMBIE
A zombie is a corpse that has been brought back to life by some mystical means. Our modern use of the term largely stems from the undead creatures featured in the 1968 horror movie called “Night of the Living Dead”. Now that film, I haven’t seen and probably never will …

18. Rare electee : WRITE-IN
A write-in candidate in an election is one for whom one can vote, but one whose name does not appear on the official ballot. Electors have to take the extra step of writing the candidate’s name on the ballot, an added step that makes it really hard for the candidate to emerge victorious. In a 1967 local election in Ecuador, a company ran a marketing campaign for a foot powder called Pulvapies, using the catchphrase “For Mayor: Honorable Pulvapies”. Some electors wrote in the name Pulvapies on their ballots, and the foot powder won …

20. Ingredient in an Americano : SODA
An Americano is a rather tasty cocktail made from Campari, sweet vermouth and club soda. The cocktail used to known as the “Milano-Torino”, as Campari comes from Milano (Milan) and Cinzano vermouth comes from Torino (Turin). The origin of the “Americano” name is disputed. Some say that ‘Americano” is in honor of the drink’s popularity with Americans visiting Italy in the early 1900s. Others say that the name comes from the Italian “amaro” meaning “bitter”.

23. Repeated battle cry : TORA
The pre-determined code word to be used by the Japanese if they managed to achieve surprise in their attack on Pearl Harbor was “tiger”, or “tora” in Japanese. This gave the name to the excellent 1970 movie “Tora! Tora! Tora!”.

25. Megadyne fractions : NEWTONS
Newtons are units of force. The newton is of course named for Sir Isaac Newton, the English physicist and mathematician.

34. “The Valley of Amazement” novelist, 2013 : AMY TAN
Amy Tan lives not too far from here, in Sausalito just north of San Francisco. Tan is an American writer of Chinese descent whose most successful work is “The Joy Luck Club”. “The Joy Luck Club” was made into a movie produced by Oliver Stone in 1993. The novel and movie tell of four Chinese-American immigrant families in San Francisco who start the Joy Luck Club, a group playing Mahjong for money and eating delicious food.

36. Org. for female shooters : LPGA
The Ladies Professional Golf Association (LPGA) was founded in 1950 by a group of 13 lady golfers, and today it is the oldest ongoing women’s sports professional organization in the US.

38. Inuit knife : ULU
An “ulu” is a knife that is traditionally used by Inuit and Yupik women. The ulu has many uses, including the skinning of animals, cutting hair, and even trimming blocks of ice used to make igloos.

39. Writer of the ethnography “Germania” : TACITUS
Gaius Cornelius Tacitus was a Roman historian and senator. He wrote two major histories, “Annals” and “Histories”, that cover the history of the Roman Emperor from 14 to 70 AD.

The “Germania” is one of several minor works by the noted Roman historian Tacitus. The “Germania” describes all aspects of the lives of the German tribes of northern Europe.

44. Suffocating blanket : SMOG
“Smog” is of course a portmanteau word formed by melding “smoke” and “fog”. The term was first used to describe the air around London in the early 1900s.

46. Get off the drive, say : DELETE
One might delete files from one’s hard drive.

47. Food factory stock : DYES
I think the reference is to food dyes that are ubiquitous in our food supply.

52. 20th-century treaty topic : TEST BAN
The US, UK and Soviet Union signed what is now called the Partial Nuclear Test Ban Treaty in 1963. This partial ban was prompted due to concerns at the time about levels of radioactive elements in the atmosphere, particularly in the southern hemisphere, caused by an increasing number of test detonations. The partial test ban prohibited all detonations other than those performed underground. It took another 33 years before a Comprehensive Nuclear-Test-Ban-Treaty could be negotiated, one which was adopted by the UN General Assembly in 1996. Sadly, as we are all well aware, it has never been enforced. Enforcement is waiting on ratification by China, Egypt, Indonesia, Iran, Israel as well as the United States, and signatures from India, North Korea and Pakistan.

59. 2012 Pro Bowl player Chris : SNEE
Chris Snee is a football player for the New York Giants. Snee is married to the daughter of Tom Coughlin, the Giants’ coach.

64. She wrote “The Proper Care and Feeding of Husbands” : DR LAURA
According to Dr. Laura Schlessinger herself, her radio show “preaches, teaches, and nags about morals, values and ethics.”

66. “Spread the happy” sloganeer : NUTELLA
Nutella is a delicious hazelnut chocolate spread made by Ferrero, a company based in Italy. Sadly, 70% of the Nutella recipe is saturated fat and processed sugar.

67. Queen’s weapon : STINGER
A queen bee has a stinger, just like the worker bees. When a worker bee stings, it leaves it stinger in its victim. The worker bee dies after losing its stinger as the loss rips out part of its insides. However, a queen bee can sting with impunity as the stingers anatomy is different.

68. Producing zip : STERILE
The use of the words “zip” and “zippo” to mean “nothing” dates back to the early 1900s when it was student slang for being graded zero on a test.

Down
1. Given a 20 for food, say : ZAGAT RATED
The Zagat Survey is best known for rating restaurants across the major cities of the US, but it also rates things like hotels, nightlife, shopping, airlines and even zoos. The survey was started by Tim and Nina Zagat in 1979, and back then the survey was simply a collection of New York City restaurant ratings provided by friends of the couple.

3. Road hog : MOTORCYCLE
“Hog” is a nickname for a Harley-Davidson motorcycle.

The Harley-Davidson motorcycle company was started up in the very early 1900s by two childhood friends, William Harley and Arthur Davidson, . Their first design was in effect an engine hooked up to a pedal bicycle, but the 116 cc cylinder capacity simply couldn’t generate enough power to get up the hills of their native city of Milwaukee. The pair came up with a redesigned model that had a cylinder capacity of 405 cc, which the partners built in a shed at the back of Davidson’s house. In 1906, the partners built their first factory, located where the company’s headquarters is to this day, on Juneau Avenue in Milwaukee, Wisconsin.

5. Johns of Britain : IANS
The name “John” translates into Scottish as “Ian”.

6. John of Britain : ELTON
Elton John’s real name is Reginald Dwight. John was knighted in 1998, not for his music but for his charitable work. He founded his own Elton John AIDS Foundation back in 1992.

7. Recife-to-Rio dir. : SSW
Recife is a major port city in Brazil. “Recife” is Portuguese for “reef”, and is a reference to stone reefs that lie off the city’s shores.

Rio de Janeiro is the second largest city in Brazil (after São Paulo). “Rio de Janeiro” translates as “January River”. The name reflects the discovery of the bay on which Rio sits, on New Years Day in 1502.

9. Like Huns : ASIAN
The Huns were a nomadic people who originated in Eastern Europe in the 4th century. Under the command of Attila the Hun they developed a unified empire that stretched from modern-day Germany across to the steppes of Central Asia. The whole of the Hunnic Empire collapsed within a year of Attila’s death in 453 AD.

11. Flatten, as a rivet : PEEN
The peen of a hammer is on the head, and is the side of the head that is opposite the striking surface. Often the peen is in the shape of a hemisphere (as in a ball-peen hammer), but usually it is shaped like a claw (mainly for removing nails).

A ball-peen hammer might be used to flatten the top of a rivet.

24. Early CliffsNotes subheading : ACT I
CliffsNotes are student study guides here in the US. Publication of CliffsNotes started in 1958 under a licensing arrangement with a Canadian company that was already publishing similar texts called Coles Notes.

26. Restin’ piece? : TAPS
“Taps” is played nightly by the US military, indicating “lights out”. It’s also known as “Butterfield’s Lullaby” as it is a variation of an older bugle call named the “Scott Tattoo”, arranged during the Civil War by the Union Army’s Brigadier General Daniel Butterfield. The tune is called “taps”, from the notion of drum taps, as it was originally played on a drum, and only later on a bugle.

32. Like some diets that avoid pasta : GLUTEN-FREE
Gluten is a protein mixture found in foods processed mainly from wheat. The sticky properties of gluten are used in making bread, giving dough its elasticity and making the final product very chewy. “Gluten” is the Latin word for “glue”.

33. People people : SUPERSTARS
There used to be a “People” page in each issue of “Time” magazine. This page was spun-off in 1974 as a publication of its own, which we now call “People” magazine.

40. Diesel discharge : SOOT
There are two main types of internal combustion engine. Most cars in the US use spark injection engines (gasoline engines) in which a spark plug sparks in order to ignite the fuel-air mixture. A diesel engine, on the other hand, has no spark plug per se, and uses the heat generated by compressing the air-fuel mixture to cause ignition.

42. Primary and secondary, briefly : ELHI
“Elhi” is an informal word used to describe anything related to schooling from grades 1 through 12, i.e. elementary through high school.

48. Habitual high achiever? : STONER
“Stoner” is a slang term for someone who is habitually intoxicated by alcohol or drugs.

50. Label stable : BANDS
A record label signs up a lot of bands.

53. C.D.C. concern : E COLI
Escherichia coli (E. coli) are usually harmless bacteria found in the human gut, working away quite happily. However, there are some strains that can produce lethal toxins. These strains can make their way into the food chain from animal fecal matter that comes into contact with food designated for human consumption.

Charles Lamb published a famous collection of essays simply entitled “Essays of Elia”. Elia was actually a clerk and co-worker of Charles Lamb, whereas Lamb was the author.

63. Swimming gold medalist Park ___-hwan : TAE
Park Tae-Hwan is a swimmer from South Korea. In the 2008 Olympics, Park became the first Korean to win an Olympic swimming medal when he took home the gold in the men’s 400m freestyle.