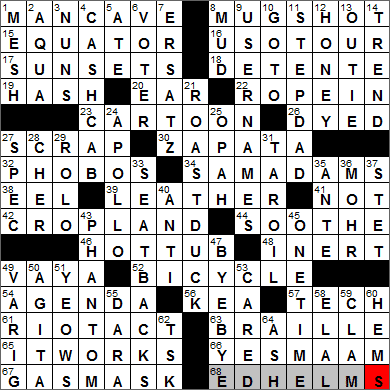 Today’s Wiki-est, Amazonian Googlies
Across
1. Locale that often includes a wet bar and large-screen TV : MAN CAVE
“Man cave” is a slang term for a male sanctuary with home, often a spare bedroom (as it is in our house) or a converted garage.

8. Picture with a number : MUGSHOT
A mugshot is a photograph of a person’s face, often taken for a police record.

16. One going around the bases? : USO TOUR
The United Service Organization (USO) was founded in 1941 at the request of FDR “to handle the on-leave recreation of the men in the armed forces”. A USO tour is undertaken by a troupe of entertainers, many of whom are big-name celebrities. A USO tour usually includes troop locations in combat zones.

18. Warm-up? : DETENTE
“Détente” is a French word meaning “loosening, reduction in tension” and in general it is used to describe the easing of strained relations in a political situation. In particular, the policy of détente came to be associated with the improved relations between the US and the Soviet Union in the seventies.

19. Greasy spoon order : HASH
“Hash”, meaning a dish of beef and vegetables mashed together, is a very American term and one that really surprised me when I first came across it. “Hash” just seems like such an unappetizing item, but I soon found out how delicious it was. The name “hash” in this context comes from the French “hacher” meaning “to chop”. Back in the early 1900s the dish called “hashed browned potatoes” was developed, which quickly morphed into “hash browns”. From there the likes of corned beef hash was introduced.

“Greasy spoon” is a familiar term for a restaurant, usually a diner, that is less than pristine and that serves cheap food.

20. Where a bud hangs out : EAR
Those would be earbuds, headphones.

23. Kind of figure : CARTOON
The word “cartoon” was originally used for a “drawing on strong paper”, a durable drawing used as a model for another work. The term comes from the French word “carton” meaning “heavy paper, pasteboard”. Cartoons have been around a long time, with some of the most famous having being drawn by Leonardo da Vinci.

26. Highlighted, say : DYED
One might use dye to put highlights in one’s hair. Well, there wouldn’t be any reason for me to do so …

30. Mexican revolutionary of 1910 : ZAPATA
Emiliano Zapata was a leader in the Mexican Revolution that took place from 1910 to 1920. Zapata was the leader of the Liberation Army of the South, a force more commonly referred to as the Zapatistas.

32. Moon of Mars : PHOBOS
Mars has two moons, the larger of which is Phobos and the smaller is Deimos. “Phobos” is the Greek word for “fear”, and “Deimos” is Greek for “dread”.

34. Draft pick? : SAM ADAMS
Samuel Adams was one of the Founding Fathers of the United States, from Boston Massachusetts. Adams followed his father into the family’s malthouse business a few years after young Samuel graduated from Harvard. There were generations of Adams family members who were “maltsters” i.e. those producing malt needed for making beer. Samuel Adams is often described as a brewer, but he was actually a malster. The Samuel Adams brand of beer isn’t directly associated with the Adams family, but it is named in honor of the patriot.

38. Electric ___ : EEL
Electrophorus electricus is the biological name for the electric eel. Despite its name, the electric “eel” isn’t an eel at all, but rather what is called a knifefish, a fish with an elongated body that is related to the catfish. The electric eel has three pairs of organs along its abdomen, each capable of generating an electric discharge. The shock can go as high as 500 volts with 1 ampere of current (that’s 500 watts), and that could perhaps kill a human.

42. Much of the Plains States : CROPLAND
The Great Plains lie between the Mississippi River and the Rocky Mountains in North America. This vast grassland is called “the Prairies” in Canada.

44. Palliate : SOOTHE
To “palliate” is to relieve the symptoms of a disease or disorder, without effecting any form of a cure. “Palliate” comes from the Latin “palliatus” meaning “cloaked”.

54. What a chair needs : AGENDA
“Agenda”is a Latin word that translates as “things to be done”, coming from the verb “agere” meaning “to do”.

61. Controversial 1715 measure of Parliament : RIOT ACT
The Riot Act was a British law that was in force from 1715 to 1967. According to the Riot Act, government entities could declare any gathering of twelve or more people “unlawful”. Our expression “read the Riot Act” is derived from the requirement for the authorities to read out the Riot Act proclamation to a unlawful assembly before the Act could be enforced.

63. Touch-type? : BRAILLE
The Braille system of reading and writing was devised in 1825 by Louis Braille, who was himself afflicted with blindness. Braille characters are composed of six positions or dots, each arranged in two columns of three dots each. Every dot can be raised or not raised, given a total of 64 possible characters.

68. “The Hangover” co-star : ED HELMS
The comedic actor Ed Helms got his big break in television on Comedy Central’s “The Daily Show”, after which he joined the cast of “The Office”. Helms is now making a name for himself on the big screen. Notably he co-stars in the “The Hangover” series of films.

Down
3. “The Sound of Music” chorus : NUNS
“The Sound of Music” is a Rodgers and Hammerstein musical made into a celebrated movie in 1965 starring Julie Andrews and Christopher Plummer. The musical is based on “The Story of the Trapp Family Singers”, a memoir by Maria von Trapp. The von Trapp family ended up in Stowe, Vermont after the war and one family descended from the Vermont von Trapps lives here in the same town in which I reside in California.

4. TV game show on the Discovery Channel, 2005-12 : CASH CAB
“Cash Cab” is a fun TV game show that originated in the UK but it now shown all over the world, including here in North America. In the US version, contestants are picked up in a cab in New York City and asked question during their ride.

7. Unreal : ERSATZ
Something described as “ersatz” is a copy, and usually not a good one. “Ersatz” comes from the German verb “ersetzen” meaning “to replace”.

8. Joe : MUD
It seems that no one really knows why we refer to coffee as “joe”, but we’ve been doing so since early in WWII.

11. Edward Murdstone, to David Copperfield : STEPDAD
“David Copperfield” is the eighth novel penned by English author Charles Dickens, first published in serial form from 1848 to 1849. The novel is seen as a somewhat autobiographical work, with many characters and events mirrored in Dickens’ own life.

24. ___ Belvedere (classic sculpture in the Vatican) : APOLLO
The Apollo Belvedere is a famous marble sculpture that can be seen in the Museo Pio-Clementino in Vatican City. The statue depicts the Greek god Apollo, and in 1511 was installed outdoors in the sculpture court of the Belvedere, the summerhouse of the Vatican Palace. This installation gave the work the name that persists to this day, even though it was moved indoors and away from the Belvedere centuries ago. The statue dates back to Ancient Roman times, and was rediscovered during the Renaissance in central Italy.

25. Great white shark prey : OPAH
Opah is the more correct name for the fish also known as the sunfish, moonfish or Jerusalem haddock. I’ve seen one in the Monterrey Aquarium. It is huge …

28. “Clueless” protagonist : CHER
Cher’s real name is Cherilyn Sarkisian, born in 1946. In her acting career, Cher was nominated for the Best Supporting Actress Oscar of 1984 for her performance in “Silkwood”. She went further in 1998 and won the Best Actress Oscar for playing Loretta Castorini in “Moonstruck”.

29. Hershey candy : ROLO
Rolo was a hugely popular chocolate candy in Ireland when I was growing up. Rolo was introduced in the thirties in the UK, and is produced under license in the US by Hershey. I was a little disappointed when I had my first taste of the American version as the center is very hard and chewy. The recipe used on the other side of the Atlantic calls for a soft gooey center.

36. Actor Jay of “Jerry Maguire” : MOHR
Jay Mohr is an American actor, one I most remember playing a supporting role in the wonderful HBO series “From the Earth to the Moon” (must see TV!). Mohr also created and hosted a reality show called “Last Comic Standing”.

“Jerry Maguire” is a 1996 film starring Tom Cruise, Cuba Gooding, Jr. and Renée Zellweger. The title character is played by Cruise, and is a sports agent. There are several liines oft quoted from “Jerry Maguire” including:

37. Leave in : STET
“Stet” is the Latin word meaning “let it stand”. In editorial work, the typesetter is instructed to disregard any change previously marked by writing the word “stet” and then underscoring that change with a line of dots or dashes.

40. Lock opener? : ANTI-
The first anti-lock braking system (ABS) was actually developed for use on aircraft, in 1929. The system reduced braking distances for aircraft by 30% because pilots were able to apply a full braking force immediately on landing instead of applying gradual pressure to avoid skidding.

50. Heartburn : AGITA
Agita is another name for acid indigestion, and more generally can mean “agitation, anxiety”.

58. Company that follows Shin Bet security procedures : EL AL
The Israel Security Agency (ISA) is Israel’s internal security service. The service is also known as the Shin Bet, a two-letter abbreviation for the agency’s name in Hebrew. Among the responsibilities of the Shin Bet is the safeguarding of Israeli airlines and overseas embassies.