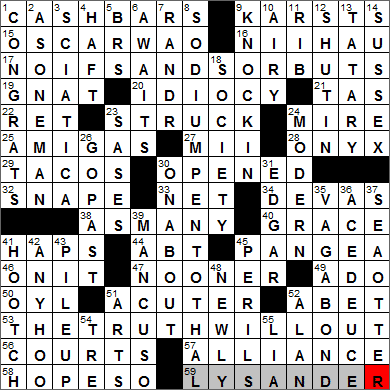 Today’s Wiki-est, Amazonian Googlies
Across
9. Rough limestone regions with sinkholes and caverns : KARSTS
A “karst” is a geological formation in which limestone has eroded away leaving sinkholes, underground streams and caverns. The term “karst” comes from such a formation in southwestern Slovenia and northeastern Italy called the Karst Plateau.

15. Novel title character with a “brief, wondrous life” : OSCAR WAO
“The Brief Wondrous Life of Oscar Wao” is a Pulitzer-winning 2007 novel by Junot Díaz, a Dominican-American writer. Díaz was raised in New Jersey, where he chose to set his popular novel.

16. Hawaii’s Forbidden Isle : NIIHAU
The Hawaiian island of Niihau lies about 17 miles southwest of Kauai, with a population of just over 100 people. Niihau is privately owned and so only a few tourists are welcome, and only in the past few decades. The lack of access led to the island earning the nickname “the Forbidden Isle”.

19. One buzzing off? : GNAT
Gnats are attracted to the smell of rotting food, and to vinegar. Simple homemade traps that use vinegar are often constructed to attract and kill gnats.

20. Three Stooges display : IDIOCY
If you’ve seen a few of the films starring “The Three Stooges” you’ll have noticed that the line up changed over the years. The original trio was made up of Moe and Shemp Howard (two brothers) and Larry Fine (a good friend of the Howards). This line up was usually known as “Moe, Larry and Shemp”. Then Curly Howard replaced his brother when Shemp quit the act, creating the most famous trio, “Moe, Larry And Curly”. Shemp returned when Curly had a debilitating stroke in 1946, and Shemp stayed with the troupe until he died in 1955. Shemp was replaced by Joe Besser, and then “Curly-Joe” DeRita. When Larry Fine had a stroke in 1970, it effectively marked the end of the act.

28. Jet black : ONYX
Onyx is a form of quartz that comes in many different shades, but most often it’s the black version that’s used for jewelry. The name “onyx” comes from the Greek word for “fingernail”, as onyx in the flesh color is said to resemble a fingernail.

32. He cast the Killing Curse on Dumbledore : SNAPE
Severus Snape is a character in the Harry Potter novels, played by the wonderful Alan Rickman on the big screen.

Dumbledore is the headmaster of the school for wizards called Hogwarts, in the Harry Potter universe. The “Harry Potter” books were of course written by J. K. Rowling, and she chose the name Dumbledore as it is an Early English word for a bumblebee. Apparently she pictured him wandering around, humming to himself.

34. Powerful Hindu deities : DEVAS
In the Hindu transition, the devas are benevolent deities. The female form of “deva” is “devi”.

41. Unlucky accidents, old-style : HAPS
Our word “hap” means chance or fortune. It turns up combined in words like “haphazard” and even “happen”. “Happen” originally meant to “occur by hap, by chance”.

44. Co. led by Baryshnikov in the 1980s : ABT
The American Ballet Theatre (ABT) is a dance company that was once led by Mikhail Baryshnikov.

45. It broke up in the age of dinosaurs : PANGEA
Pangaea was a supercontinent that existed during the age of the dinosaurs, the late Paleozoic and early Mesozoic eras. Pangaea broke apart due to movement of tectonic plates in the Earth’s crust. All of today’s continents were once part of Pangaea.

50. Olive ___ : OYL
“Thimble Theater” was the precursor comic strip to the famous “Popeye” drawn by E. C. Segar. Before Popeye came into the story, the brother and sister characters Castor Oyl and Olive Oyl were the main protagonists. And then along comes a sailor …

52. Give an underhanded hand? : ABET
“Aid” and “abet” are synonyms. The word “abet” comes into English from the Old French “abeter” meaning “to bait” or “to harass with dogs” (it literally means “to make bite”). This sense of encouraging something bad to happen morphed into our modern usage of “abet” meaning to aid or encourage someone in a crime.

53. Assertion more likely to be correct if 8-Down is given : THE TRUTH WILL OUT
“Truth will out” is a phrase meaning that the truth will eventually emerge. The phrase originated with Shakespeare, in a speech by Launcelot in “The Merchant of Venice” …

Nay, indeed, if you had your eyes, you might fail of the knowing me: it is a wise father that knows his own child. Well, old man, I will tell you news of your son: give me your blessing: truth will come to light; murder cannot be hid long; a man’s son may, but at the length truth will out.

57. Axis, e.g. : ALLIANCE
Before WWII, Hungary’s prime minister was lobbying for an alliance between Germany, Hungary and Italy and worked towards such a relationship that he called an “axis”. The main Axis powers during the war of course were Germany, Italy and Japan. However, also included in the relationship were Romania, Bulgaria and the aforementioned Hungary.

58. “Fingers crossed” : HOPE SO
The crossed-fingers hand gesture is used as a wish for good luck, or sometimes as an excuse for telling a white lie. The gesture originated in the early Christian church when crossing of the fingers invoked the protection of the Christian cross. Crossed fingers were also used by Christians as a secret sign of recognition during the days of persecution by the ancient Romans.

59. Whose eyes Puck squeezes magical juice on : LYSANDER
Lysander is a character in William Shakespeare’s play “A Midsummer Night’s Dream”. He is one of the four young Athenian lovers in the play, who is wished to marry Hermia.

Puck aka Robin Goodfellow is a character in William Shakespeare’s “A Midsummer Night’s Dream”, one of the Fairies in the tale. One of Puck’s tasks in the storyline is to use love juice that is made from a flower that has been hit by cupid’s arrow. The magical juice is applied to the eyelids of someone sleeping, so that the person wakes and falls in love with the first living things he or she sees. Of course, Puck drops the love juice on the wrong character …

Down
3. Common result of a slipped disk : SCIATICA
Sciatica is pain caused by compression and inflammation of one or both of the sciatic nerves that run from the lower back down to the lower legs.

4. Foil feature : HAFT
The “haft” of a weapon is its handle or hilt.

7. What a vacay provides : R AND R
A vacation (“vacay”) might provide some rest and relaxation/recuperation (R&R).

8. What an interrogator might administer : SODIUM PENTOTHAL
Sodium Pentothal is a brand name for the drug sodium thiopental. Sodium thiopental is mainly used as a general anesthetic. It is usually the first drug of three given in a lethal injection administered to carry out capital punishment in the US.

13. Vast historical region controlled by the Mongols : TATARY
Tartary (sometimes “Tatary”) was a name used in Europe for the Great Steppe that stretches across northern and central Asia.

The Mongols are an ethnic group that is found today in modern Mongolia, in China and in Russia.

14. Kingdom next to Kent : SUSSEX
Sussex is a county in the very southeast of England, lying right on the English Channel. The county of Sussex has about the same boundaries as the ancient Kingdom of Sussex, a Saxon colony that existed for about five hundred years until the Battle of Hastings in 1066. Hastings, a town on the Sussex coast was the site of the first battle of the Norman Conquest of England.

Kent is a county in the southeast of England. Kent is a little unusual in that it shares a “land” border with France. That border nominally exists halfway through the Channel Tunnel, one end of which comes to surface in the Kent port of Folkestone.

23. They aid responses, in brief : SASES
A self-addressed stamped envelope (SASE) might be an enclosure (enc.) sent with a letter.

30. Speaking of repeatedly, to a Brit : ON ABOUT
In Britain, “to go on about” something is to talk about it repeatedly.

31. 1984 award for Elmore Leonard : EDGAR
The Edgar Allan Poe Awards (the Edgars) are presented annually by the Mystery Writers of America.

Elmore Leonard used to write a lot of westerns in the fifties and moved onto crime and suspense novels later in his career. A lot of his books have made it to the big screen, including “Get Shorty” and “Mr Majestyk”.

35. Drifting type : VAGABOND
A “vagabond” is a person without a home who moves from place to place. The term derives from the Latin “vagabundus” meaning “wandering, strolling about”.

36. Good hand holding in Omaha Hi-Lo : ACE-DEUCE
Omaha is a poker card game similar to Texas hold ‘em. The two games differ in that there are four initial hole cards per player in Omaha (as opposed to just two in Texas hold ’em). And in Omaha each player’s hand is made up of exactly three cards from the board and exactly two of the player’s own cards.

39. Alpine skier Julia who won Olympic gold in 2006 : MANCUSO
Julia Mancuso is an alpine ski racer from Reno, Nevada. Mancuso won Olympic gold in the giant slalom at the 2006 Winter Olympics. In total, she has won three Olympic medals, more than any other American alpine skier. Mancuso had a tough upbringing as her father was convicted of running a $140 million marijuana smuggling operation when she was just five years old.

41. Still-produced stuff : HOOTCH
In the Klondike gold rush, a favorite tipple of the miners was “Hoochinoo”, a liquor made by the native Alaskans. Soon after “hooch” (also “hootch”) was adopted as a word for cheap whiskey.