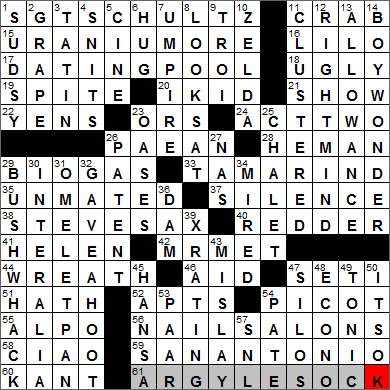 Today’s Wiki-est, Amazonian Googlies
Across
1. 1960s sitcom character with the catchphrase “I see nothing!” : SGT SCHULTZ
“Hogan’s Heroes” is a sitcom that ran in the late sixties and early seventies. The show starred Bob Crane as the ranking prisoner in a German POW camp during WWII. The four major German roles were played by actors who all were Jewish, and who all fled from the Nazis during the war. In fact, the Sergeant Schultz character was played by John Banner, who spent three years in a concentration camp.

11. Kvetch : CRAB
The word “kvetch” of course comes to us from Yiddish, with “kvetshn” meaning “to complain” or “squeeze”.

16. Disney title character surnamed Pelekai : LILO
“Lilo & Stitch” was released by Disney in 2002. Compared to other Disney feature-length cartoons, “Lilo & Stitch” was relatively cheaply produced, using the voices of lesser-known actors. One interesting change had to take place in the storyline during production, when Lilo was meant to fly a Jumbo Jet through downtown Honolulu in one sequence. This was replaced with a sequence using a spaceship instead, as the producers were sensitive to public sentiment after the September 11 attacks.

22. Itches : YENS
The word “yen”, meaning “urge”, has been around in English since the very early 1900s. It comes from the earlier word “yin” imported from Chinese, which was used in English to describe an intense craving for opium!

26. Elated outpouring : PAEAN
A paean is a poem or song that expresses triumph or thanksgiving. “Paean” comes from the ancient Greek “paian” meaning “song of triumph”.

28. Hercules type : HE-MAN
The Twelve Labors of Hercules is actually a Greek myth, although Hercules is the Roman name for the hero that the Greeks called Heracles. The first of these labors was to slay the Nemean Lion, a monster that lived in a cave near Nemea. Hercules had a tough job as the lion’s golden fur was impenetrable to normal weapons. One version of the story is that Hercules killed the lion by shooting an arrow into its mouth. Another version says that Hercules stunned the monster with a club and then strangled him with his bare hands.

29. Result of some fermentation : BIOGAS
Biogas is mixture of methane and carbon dioxide resulting from the breakdown of organic matter by anaerobic bacteria. Biogas is used as a renewable energy source, as it is produced from recycled waste.

Worcestershire Sauce is a variant of a fermented fish sauce that has been around since the days of the Roman Empire. The modern sauce was developed and marketed by Messrs. Lea and Perrins in the city of Worcester, then in the county of Worcestershire, hence the name. We vegans aren’t supposed to touch it, as it contains anchovies! Oh, and “Worcestershire” is pronounced “wooster-sheer” …

38. Second baseman in both of the Dodgers’ 1980s World Series : STEVE SAX
Steve Sax is a former second baseman who played most of his career with the LA Dodgers. Sadly, Sax had a particularly bad 1983 season and had problems making routine throws to first base. As a result, the phrase “Steve Sax Syndrome” is now part of baseball parlance, and is used when a second baseman has trouble throwing to first.

40. Like South Carolina vis-à-vis North Carolina, politically : REDDER
On political maps, red states are Republican and blue states Democrat. The designation of red and blue states is a very recent concept, only introduced in the 2000 presidential election by TV journalist, the late Tim Russert. In retrospect, the choice of colors is surprising, as in other democracies around the world red is usually used to describe left-leaning socialist parties (the reds under the bed!), and blue is used for conservative right-wing parties. In election cycles, swing/battleground states are often depicted in purple.

41. Storied abductee : HELEN
In Greek mythology, Helen of Sparta was the daughter of Zeus and Leda. She became known as Helen of Troy, as the Trojan War started when she was abducted by Paris and taken from Sparta to Troy.

42. Sports mascot who’s a popular bobblehead figure : MR MET
Mr. Met is the mascot of the New York Mets. He is a guy with a large baseball as a head, and has been elected to the Mascot Hall of Fame.

46. Comfort’s partner : AID
Aid and comfort (to the enemy, for example).

47. “The X-Files” project, for short : SETI
SETI is the name given to a number of projects that are searching for extraterrestrial life. The acronym stands for “search for extraterrestrial intelligence”. One of the main SETI activities is the monitoring of electromagnetic radiation (such as radio waves) reaching the Earth in the hope of finding a transmission from a civilization in another world.

“The X-Files” is a very successful science fiction show that aired on the Fox network from 1993 to 2002. The stars of the show are David Duchovny (playing Fox Mulder) and the very talented Gillian Anderson (playing Dana Scully). By the time the series ended, it was the longest running sci-fi show in US broadcast history.

54. Embroidery loop : PICOT
A picot is a loop of thread, either for function or for decoration, at the edge of some knitted or tatted material.

55. Brand once pitched by Garfield : ALPO
Alpo is a brand of dog food first produced by Allen Products in 1936, with “Alpo” being an abbreviation for “Allen Products”. Lorne Greene used to push Alpo in television spots, as did Ed McMahon and Garfield the Cat, would you believe?

58. Relative of aloha or shalom : CIAO
“Ciao” is the Italian for “‘bye”. “Arrivederci” is more formal, and translates better as “goodbye”.

The Hawaiian word “Aloha” has many meanings in English: affection, love, peace, compassion and mercy. More recently “aloha” has come to mean “hello” and “goodbye”, but only since the mid-1800s.

59. Home of the WNBA’s Silver Stars : SAN ANTONIO
The San Antonio Silver Stars are a team playing in Women’s National Basketball Association. The team was founded as the Utah Starzz in 1997, and relocated to Texas in 2003.

60. Transcendental aesthetic developer : KANT
Immanuel Kant was an 18th-century, German philosopher. Kant published “Perpetual Peace” in 1795, laying out what he believed were conditions for ending all wars and creating a lasting peace. The good news for us is that one of these conditions was to have a world full of constitutional republics, so it seems that we are on the right track here in the US!

Plus fours are so called because the traditional design extends four inches in the leg longer than knickerbockers. You can also get hold of plus twos, plus sixes and plus eights should you be interested.

Down
3. Tarte ___ (French apple dessert) : TATIN
Tarte Tatin is a upside-down apple tart that is very popular in France. The dessert is named for the Hotel Tatin in Lamotte-Beuvron (about 100 miles south of Paris), where it was invented.

5. What César awards honor : CINE
“Cine” is the French for “cinema”.

9. “Star Trek: T.N.G.” role : TROI
Deanna Troi is a character on “Star Trek: The Next Generation” who is played by the lovely Marina Sirtis. Sirtis is a naturalized American citizen and has what I would call a soft American accent on the show. However, she was born in the East End of London and has a natural accent off-stage that is more like that of a true Cockney.

10. Literary wife in “Midnight in Paris” : ZELDA
Zelda Fitzgerald, the wife of F. Scott Fitzgerald, was a novelist in her own right. Zelda’s one and only novel is “Save Me the Waltz”, a semi-autobiographical account of her life and marriage.

11. Nearly set? : CLUSTERED
Marty (in a comment below) explained this one for me. Things that are “nearly set”, things set near to each other, are “clustered”.

14. Early riser? : BOY WONDER
A kind blog reader explained this answer to me. A “boy wonder” is someone who rises through the ranks early in his career.

23. Locales that may be well-supplied? : OASES
The most famous oasis in the US is … Las Vegas, in the middle of the Mojave Desert.

25. Digs on a slope : CHALET
“Digs” is short for “diggings” meaning “lodgings”, but where “diggings” came from, no one seems to know.

26. Recognition not sought by Benjamin Franklin : PATENT
Benjamin Franklin was a prolific inventor, coming up bifocal glasses and the flexible catheter (!) among other things. Franklin never filed for patents for his creations, and wrote:

“… as we enjoy great advantages from the inventions of others, we should be glad of an opportunity to serve others by any invention of ours; and this we should do freely and generously.”

27. Rapper with the 2012 album “Life Is Good” : NAS
The rap artist Nas used to go by another stage name, Nasty Nas, and before that by his real name, Nasir bin Olu Dara Jones. Nas released his first album “Illmatic” in 1994, and inventively titled his fifth studio album “Stillmatic”, released in 2001. Not my cup of tea, I would say …

29. Clear one’s way, in a way : BUSHWHACK
“To bushwhack” is to whack your way through the bush or thick woods.

45. Medieval merchants’ guild : HANSA
The Hanseatic League was a confederation of merchant guilds and market towns that stretched along the Northern European coast from the 13th to the 17th centuries. Also known as the Hansa, the league is remembered today in company names like “Lufthansa” (“Air Hansa”).

47. Grain elevator components : SILOS
Silo is a Spanish word that we absorbed into English, originally coming from the Greek word “siros” that described a pit in which one kept grain.

54. Fancy spread : PATE
Pâté is a rich spreadable paste made up of a mixture of ground meat and fat, to which various vegetables, herbs and spices may be added. The most famous version is pâté de foie gras, made from the fattened livers of geese (“foie gras” means “fat liver” in French).

57. Show on Sen. Franken’s résumé : SNL
Al Franken is the junior US Senator from Minnesota. Franken won the seat in 2009 after an extremely close race, a race that he eventually won by just 312 votes. Prior to serving in the Senate, Franken was a noted satirist and writer for “Saturday Night Live”.