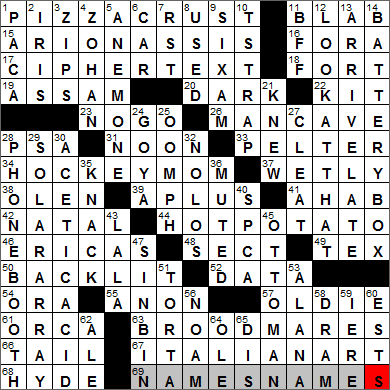 Today’s Wiki-est, Amazonian Googlies
Across
1. Domino’s bottom? : PIZZA CRUST
Domino’s Pizza started out as DomiNick’s, a pizza store in Ypsilanti, Michigan. The store was purchased by Dominic’s founder Tom Monaghan in 1960, along with his brother. Tom bought out his brother a few months later, for the price of a used VW! The store was renamed Domino’s Pizza in 1965, and two years later the first franchise store was opened. There are now over 8,000 stores worldwide, including one in Tallaght in Ireland, the town where I lived for many years in my youth. That Tallaght store became the first Domino’s outlet in the world to hit a turnover of $3 million a year. We Irish obviously have terrible taste when it comes to pizza …

15. Olympic Tower financier : ARI ONASSIS
The Olympic Tower is a high-rise in New York City that was opened in 1976. The tower is located right beside St. Patrick’s Cathedral in Midtown Manhattan. The building’s construction was funded by Greek billionaire Aristotle Onassis, who also established Olympic Airways, which was the Greek national airline for decades.

16. Roman marketplaces : FORA
The Roman forum was the public space in the middle of a city, taking it’s name from the Latin word “forum” meaning “marketplace, town square”.

18. Something to hold down : FORT
Our expression “to hold down the fort” means to take care of things temporarily in someone’s absence. The phrase was originally written as “hold the fort”, and is an expression that may date back to Roman times when it had the literal meaning of retaining control of the defensive structure.

19. Asian silk center : ASSAM
Assam is a state in the very northeast of India, just south of the Himalayas. Assam is noted for its tea as well as its silk.

26. Al Bundy’s garage, e.g. : MAN CAVE
Al Bundy is a lead character in the television sitcom “Married with Children”. He is played by Ed O’Neill, an actor who is currently making it big playing Jay Pritchett on the very entertaining show called “Modern Family”.

38. “The Tourist” novelist Steinhauer : OLEN
Olen Steinhauer wrote the espionage thriller “The Tourist”, published in 2009. It’s about a CIA agent who specializes in black ops. George Clooney’s production company has purchased the film rights and the word is that a movie may be in the works soon with Clooney in the lead role. The 2010 espionage movie “The Tourist” starring Angelina Jolie and Johnny Depp is a different project altogether (and a pretty predictable and forgettable film, by the way) that bears no relation to the Steinhauer novel.

41. Literary character who says “I’ll chase him round Good Hope” : AHAB
Captain Ahab is the obsessed and far from friendly Captain of the Pequod in Herman Melville’s “Moby Dick”.

42. Kind of horoscope : NATAL
A natal horoscope or natal chart is an astrological map that is built around the exact time and location of an individual’s birth. The chart shows the position of the astrologically relevant celestial bodies at that time.

44. Kids’ party game : HOT POTATO
Hot potato is a kid’s game in which an object like a beanbag is tossed between players while music is played. When the music stops, whoever is holding the beanbag (hot potato) is eliminated.

46. Bell heather and tree heath : ERICAS
It is a commonly held belief that heather and erica are the same thing botanically, but in fact, erica is another name for a different species called “heath”.

49. Follower of Gore? : -TEX
Gore-Tex is a waterproof fabric that also “breathes”. This is because the pores in Gore-Tex are small enough to keep out water droplets, but large enough to allow water vapor molecules to pass through.

52. Minable material : DATA
The process of data mining is used to extract information from a database and present it in a form that facilitates further use.

55. “I’ll send for you ___”: Othello : ANON
“Anon” originally meant “at once” and evolved into today’s meaning of “soon” apparently just because the word was misused over time.

Shakespeare’s “Othello” was first performed in 1604. The main characters in the play are:

61. Swimmer featured in the 2013 film “Blackfish” : ORCA
“Blackfish” is a 2013 documentary film that examines the dangers of keeping orca in captivity.”Star” of the movie is a killer whale (orca) called Tilikum who was responsible in whole or in part for the deaths of three people. Tilikum was captured in 1983 and has been a “guest” of SeaWorld since 1992. Most recently, Tilikum killed a 40-year old trainer called Dawn Brancheau in 2010.

63. Important stud farm visitors : BROODMARES
A broodmare is a mare (female horse) that is used for breeding.

67. Pre-Raphaelite ideal : ITALIAN ART
The Pre-Raphaelite Brotherhood was a group of 19th-century artists who wanted to return to the style of art that pre-dated Raphael and Michelangelo.

68. Bad side of literature? : HYDE
Robert Louis Stevenson’s novella “The Strange Case of Dr. Jekyll and Mr. Hyde” was first published in 1886. There are many tales surrounding the writing of the story including one that the author wrote the basic tale in just three to six days, and spent a few weeks simply refining it. Allegedly, Stevenson’s use of cocaine stimulated his creative juices during those few days of writing.

Down
1. Spotted South American mammal : PACA
There are two species of pacas, and both are found in Central and South America. In some parts, paca is considered a gourmet dish.

2. The white surrounds it : IRIS
The iris is the colored part of the eye with an aperture in the center that can open or close depending on the level of light hitting the eye.

ZIP codes were introduced in 1963. The acronym ZIP stands for Zone Improvement Plan, a name indicating that mail travels more efficiently when the codes are included in the postal address.

4. 2008 title role for Adam Sandler : ZOHAN
“You don’t Mess with the Zohan” is a 2008 comedy produced by and starring Adam Sandler. It’s about an Israeli commando who fakes his own death so that he can head to New York City and become a hairstylist.

10. It may be over a foot : T-STRAP
A t-strap is a t-shaped strap that is part of many women’s shoes. The strap is in two parts, with one part going across the ankle, and the other lying along the length of the foot on top.

21. Apprehended : KNEW
“To apprehend” can mean “to grasp mentally”.

24. Big name in Hispanic food : GOYA
Goya Foods is headquartered in Secaucus, New Jersey. It is was founded in 1936 and today is the largest Hispanic-owned food company in the nation.

28. DC transformation location : PHONE BOOTH
I think the reference is to the DC Comics hero Superman, who changes from his street clothes into his Superman outfit in a phone booth.

30. CH3COOH : ACETIC ACID
Acetic acid has the formula CH3COOH, and is the main component of vinegar.

32. Some pleas, briefly : NOLOS
“Nolo contendere” is a legal term that translates from Latin as “I do not wish to contend”. It’s the plea of “no contest” and is an alternative to “guilty” or “not guilty”, meaning that one doesn’t admit guilt but nor does one dispute the charge.

40. Grp. concerned with feeding the kitty : SPCA
Unlike in most developed countries, there is no “umbrella” organization in the US with the goal of preventing cruelty to animals. Instead there are independent organizations set up all over the nation using the name SPCA. Having said that, there is an organization called the American Society for the Prevention of Cruelty to Animals (ASPCA) that was originally intended to operate across the country, but really it now focuses its efforts in New York City.

45. Raiser of dogs? : OTTOMAN
“Dogs” is a slang term for feet. There seems to be a theory that the term evolved from the expression “dog-tired”.

An ottoman can be a cushioned footstool.

51. Trattoria dessert : TORTA
“Torta” is the Italian and Spanish word for “cake”.

53. “32 Flavors” singer Davis, 1998 : ALANA
Alana Davis is a singer-songwriter from New York City. Alana is the daughter of pianist Walter Davis, Jr., who played with the likes of Charlie Parker and Dizzy Gillespie.

“32 Flavors” is a song that was written and recorded by Ani DiFranco in 1995. Alana Davis released a cover version of “32 Flavors” as her debut single in 1998. The song title is a pun on the Baskin-Robbins slogan “31 flavors”.

56. “Barney Miller” Emmy winner Pitlik : NOAM
Noam Pitlik was a television director and actor. He won a Best Director Emmy in 1979, for his work on the sitcom “Barney Miller”.

58. Armenia’s basic monetary unit : DRAM
The currency of Armenia is called the dram, which is divided into 100 luma. Armenia became independent for the USSR in 1991 and replaced the Russian ruble with the dram in 1993.

59. French suffix with jardin : -IERE
“Jardinière” is the feminine form of the French word for “gardener”. In English, a jardinière is a decorative container for flowers that is usually located outdoors.

65. Trash : DIS
“Dis” is a slang term meaning “insult” that originated in the eighties, and is a shortened form of “disrespect: or “dismiss”.