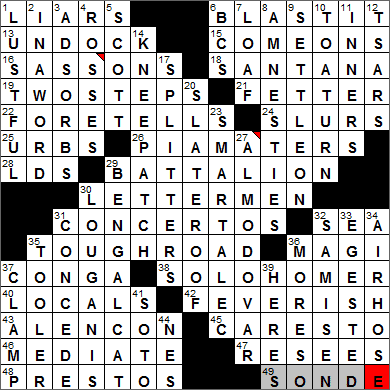 19. Scott Joplin’s “The Entertainer” and others : TWO-STEPS
Scott Joplin was a great American composer and pianist, the “King of Ragtime”. Joplin was born poor, into a laboring family in Texas. He learned his music from local teachers and started out his career as an itinerant musician, traveling around the American South. He found fame with the release of his 1899 composition “Maple Leaf Rag”, regarded as the foundation stone on which ragtime music was built. Joplin’s music, and ragtime in general, was rediscovered by the populous in the early seventies when it was used in the very successful movie “The Sting”.

“The Entertainer” is a piano rag from the very early 1900s that was written by Scott Joplin. “The Entertainer” regained its popularity in the 1970s when it was chosen as the theme music for the marvelous film “The Sting”. The ragtime score in “The Sting” was a bit of an anachronism, as the popularity of ragtime music had waned by the 1930s, the era in which the film was set.

26. They adhere to brains : PIA MATERS
“Pia mater” is Latin, and means “tender mother”. It is the name given to the mesh-like envelope that surrounds the brain and spinal cord. The pia mater brings blood to some of the exterior parts of the brain, and provides physical support for larger blood vessels passing over the brain’s surface.

28. Temple inits. : LDS
The Church of Jesus Christ of Latter-day Saints, often abbreviated to “LDS”, is known colloquially as the Mormon Church.

31. See 48-Across : CONCERTOS
A concerto is a musical work usually composed of three movements, and is usually written for a solo instrument accompanied by an orchestra.

36. Gifted trio? : MAGI
“Magi” is the plural of the Latin word “magus”, a term applied to someone who was able to read the stars. Hence, magi is commonly used with reference to the “wise men from the East” who followed the star and visited Jesus soon after he was born.

37. Follow the party line? : CONGA
The conga line is a dance that originated as a Cuban carnival march. It became popular in the US starting in the thirties. The dance is apparently named after the Congo region of Africa, and it was originated by slaves who were brought from there to Cuba.

43. Delicate needlepoint lace : ALENCON
Alençon is a commune in Normandy in northern France. In the 17th century it was renowned for lace production, lace that went by the name of “point d’Alençon”.

48. Fast parts of 31-Across : PRESTOS
On a musical score, presto is used to indicate a fast tempo. “Presto” is the Italian word for “quick”.

49. Meteorological probe : SONDE
A sonde is a probe that is sent into the upper atmosphere to make physical observations. “Sonde” is the French word for “sound”, so the idea is that one is “sounding” the atmosphere.

Down
1. Like wolves vis-à-vis foxes : LUSTFUL
We use the French phrase “vis-a-vis” to mean “with regard to” or “in relation to”. The literal translation from the French is “face to face”. When we imported the phrase into English in the mid-1700s, it had two other meanings that were more faithful to the original. Firstly, it could be a “face to face” meeting (not so today), and secondly, it was a type of carriage in which the occupants faced each other.

4. Susan’s family on “Seinfeld” : ROSSES
Susan Ross was George Costanza’s fiancee for a while on “Seinfeld”. George bough cheap, toxin-laden envelopes for Susan to mail out wedding invitations. She died from licking the glue in them. Susan was played by actress Heidi Swedberg.

5. The Father of the Historical Novel : SCOTT
Sir Walter Scott was a Scottish novelist and playwright, the first English-language author to gain popularity around the world during his own lifetime. The more famous of his works are “Ivanhoe”, “Rob Roy” and “The Lady of the Lake”.

6. Group of football games played at the beginning of Jan. : BCS
The Bowl Championship Series (BCS) is the ranking system that is used to match up the top ten ranked NCAA football teams for five bowl games.

12. Strongmen of old : TSARS
The term czar (also tsar) is a Slavic word that was first used as a title by Simeon I of Bulgaria in 913 AD. “Czar” is derived from the word “Caesar”, which was synonymous with “emperor” at that time.

17. Fastballs that drop sharply near the plate : SPLITTERS
A splitter is a split-finger fastball pitch in baseball.

23. Wise sort : SMART ALEC
Apparently the original “smart Alec” was Alec Hoag, a pimp, thief and confidence trickster who plied his trade in New York City in the 1840s.

27. 2002 Best Original Screenplay Oscar winner for “Talk to Her” : ALMODOVAR
Pedro Almodovar is a very successful Spanish film director, born in a small town in the region of La Mancha (made famous by Don Quixote). I’m afraid I don’t recognize any of Almodovar’s films.

29. Spotted hybrid house pet : BENGAL CAT
Bengal cats are a hybrid breed resulting from crossing a domestic cat with an Asian leopard cat. The name of the hybrid comes from the taxonomic name for the
asian leopard cat, namely “Prionailurus bengalensis”.

30. 1980s Olympic star with the autobiography “Breaking the Surface” : LOUGANIS
Greg Louganis is an American Olympic diver. Louganis won gold medals at the 1984 and the 1988 Summer Games. He wrote an autobiography in 1996 called “Breaking the Surface” in which he disclosed that he has tested positive for HIV and is openly gay. You can see Louganis on television as the Dive Master in the show “Splash”.

32. Geisha’s instrument : SAMISEN
A samisen is a traditional Japanese instrument, with three strings, vaguely like a banjo. The samisen is played with a plectrum that is called a bachi.

41. Florida’s De ___ National Monument : SOTO
The De Soto National Monument lies on the Gulf Coast of Florida. The monument commemorates the 1539 landing of Spanish conquistador Hernando De Soto in the Tampa Bay area with over 600 soldiers.

Hernando de Soto was a Spanish conquistador who led expeditions throughout the southeastern US. De Sotos travels were unsuccessful in that he failed to bring gold or silver back to Spain, and nor did he found any colonies. What de Soto did achieve was the exposure of local populations to devastating Eurasian diseases.