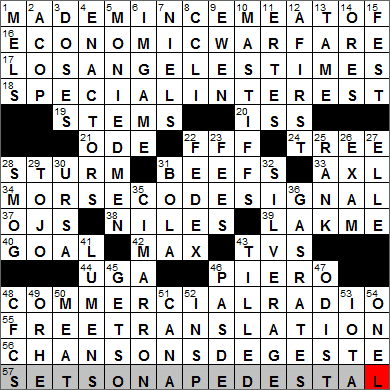 Today’s Wiki-est, Amazonian Googlies
Across
16. Use of blockades, say : ECONOMIC WARFARE
“Embargo” and “blockade” are two similar yet different terms. An embargo is a legal prohibition of trade with a particular country, whilst a blockade is an act of war, a militarily enforced prevention of the movement of goods and services. The term “embargo” came into English from Spanish, in the late 16th century.

19. Watch things : STEMS
The stem of a watch is the shaft that projects from the body and which is used to wind the mechanism. Prior to the introduction of stem watches, the timepieces were wound up using a key.

24. Bay, say … or bring to bay : TREE
The bay laurel is an evergreen tree or large shrub that is also known as the bay tree, especially in the UK. The aromatic leaves of the bay laurel are the popular “bay leaves” that are often added to pasta sauces.

28. Tempest, to Theodor : STURM
“Sturm” is the German word for “storm, tempest”.

31. Bellyaches : BEEFS
A “beef” is a complaint or a grievance. It’s not quite clear how “beef” came to have this meaning, but one suggestion is that derives from the habit of soldiers at the end of the 1800s complaining about the quality or availability of beef in their rations.

34. One may be tapped out : MORSE CODE SIGNAL
Samuel Morse was a very accomplished and reputable painter (he was engaged to paint a portrait of President John Adams, for example). In 1825 Morse was in Washington working on a commissioned painting when he received a one-line letter by horse messenger telling him that his wife was ill. He left immediately for his home in New Haven, Connecticut but by the time that Morse arrived his wife had already died and had been buried. This single event spurred him to move from painting to the development of a rapid means of long distance communication, leading to the single-wire telegraph and Morse code.

38. McKinley’s Ohio birthplace : NILES
The Ohio city of Niles was founded in 1806 as Heaton’s Furnace. The founder was James Heaton, who owned one of the early iron-ore processing plants in Ohio. The town was later renamed to Nilestown in honor of Hezekiah Niles, who was editor of a Baltimore newspaper called the “Niles Register”. The city’s name was shortened to Niles in 1843. Future US President William McKinley was born in Niles in 1911.

President William McKinley was re-elected in 1900, and of course failed to serve out the full term. In September of 1901 he went to the Pan-American Exposition in Buffalo, New York where he went to meet the public at the Exposition’s Temple of Music. There Leon Czolgosz was waiting, armed with a pistol. Czolgosz shot the President twice before being subdued (and beaten) by the crowd. Doctors operated, and were able to stabilize President McKinley. The medical profession decided to leave one bullet inside the victim, on the face of it a good decision as the President spent almost a week apparently recovering from his ordeal. However, he relapsed, and eight days after being shot he died from gangrene surrounding the wound.

39. Title priestess of opera : LAKME
“Lakmé” is an opera by the French composer Léo Delibes. “Lakmé” is a tragic work set in India in the mid-1900s, at the height of the British Raj. The title character is a priestess and daughter of a Brahmin priest called Nilakantha.

43. Sony output : TVS
Sony was founded by Akio Morita and Masaru Ibuka. The two partners met in the Japanese Navy during WWII.

44. Bulldogs’ sch. : UGA
The University of Georgia (UGA) is primarily located in Athens, Georgia. UGA was founded in 1785 and was the nation’s first state-chartered university. UGA’s sports teams are called the Georgia Bulldogs.

Down
1. 1970s-’80s sitcom setting : MEL’S
The TV sitcom “Alice” ran from 1976 to 1985, a story about a widow named Alice who takes a job at Mel’s Diner. The show was based on a very successful 1974 movie called “Alice Doesn’t Live Here Anymore” directed by Martin Scorsese (his first Hollywood production) and starring Ellen Burstyn and Kris Kristofferson.

5. What Hamilton called the wealthy : MONIED MEN
Alexander Hamilton was one of America’s Founding Fathers, chief of staff to General George Washington and the first Secretary of the Treasury. It was Hamilton who founded the nation’s first political party, the Federalist Party. He is also famous for fighting a duel with Vice President Aaron Burr, which resulted in Hamilton’s death a few days later.

George Gershwin is my second favorite American composer (after Philip Glass). Gershwin’s music dominated the popular and classical genres in his day. The list of Gershwin’s most popular works includes “Rhapsody in Blue” (1924), “An American in Paris” (1928) and “Porgy and Bess” (1935).

10. Guarders with droopy ears and pendulous lips : MASTIFFS
There are a number of Mastiff breeds of dog, all of which are noted for their large size. Even though modern Mastiffs generally have an easy temperament, over the centuries the Mastiff breeds have been used as guard dogs and war dogs, even back to Ancient Roman times.

11. Some collectible lithographs : ERTES
Erté was the pseudonym of French artist (Russian born) Romain de Tirtoff. Erté is the French pronunciation of his initials “R.T.”

Lithography is a printing technique that was invented in 1796 as a cheap way to publish theatrical works. In the litho process the image is drawn on a metal plate, although originally it was drawn on a stone (hence the prefix “litho-“). The image is drawn in such a way that some regions of the plate repel ink, and then when paper is applied to the plate, those areas are ink-free.

22. Send quickly, in a way : FEDEX
FedEx began operations in 1973 as Federal Express, but now operates very successfully under it’s more catchy abbreviated name. Headquartered in Memphis with its “SuperHub” at Memphis International Airport, FedEx is the world’s largest airline in terms of tons of freight flown. And due to the presence of FedEx, Memphis Airport has the largest-volume cargo operation of any airport worldwide.

27. Allure alternative : ELLE
“Elle” magazine was founded in 1945 in France and today has the highest circulation of any fashion magazine in the world. “Elle” is the French word for “she”.

“Allure” is magazine published by Condé Nast in New York that was founded in 1991 by Linda Wells. “Allure” contains articles on beauty, fashion and women’s health.

28. Sun blocker : SMOG
“Smog” is of course a portmanteau word formed by melding “smoke” and “fog”. The term was first used to describe the air around London in the early 1900s.

29. Pearl Harbor attack initiator : TOJO
Hideki Tojo was a general and the Prime Minister of Japan during most of WWII. Although the attack on Pearl Harbor was planned before he took office, Tojo was the Prime Minister who made the decision to declare war on the US. After Japan surrendered, General MacArthur ordered Tojo’s arrest. Tojo attempted to commit suicide by shooting himself in the heart, but missed. There is a story that while recovering, Tojo was given a set of replacement dentures that were made by an American dentist. Apparently the dentist drilled the message “Remember Pearl Harbor” into the teeth in Morse code. Tojo was hanged for war crimes in 1948.

30. Polaris bear : URSA
Because the direction of the Earth’s axis moves, albeit very slowly, the position of north relative to the stars changes over time. The bright star that we see in our lifetimes that is closest to true north is Polaris, and so we call Polaris the pole star. It is the brightest star in the constellation Ursa Minor.

31. Limb-entangling weapon : BOLA
Bolas are heavy balls connected by cords that constitute a throwing weapon. Bolas are often used to capture animals by tripping them as they run. The weapon is usually associated with gauchos, the South American cowboys.

35. 1931 Best Picture : CIMARRON
“Cimarron” is a 1929 novel by Edna Ferber, adapted into a film of the same name two years later. The novel and movie are set during the Oklahoma Land Rush. Unsettled land back then was known as Cimarron Territory, a familiar name used by settlers, giving Ferber the title for her novel.

41. Light measures : LUMENS
The lumen is a measure of the amount of visible light emitted by a source.

46. Lead-in to deux or trois : PAS DE
The the world of ballet, a “pas de deux” is a duet in which the dancers dance together. A classic pas de deux has a particular structure. It starts with a short entree followed by an adagio and two variations, one for each dancer, and ends with a short coda. The term “pas de deux” is French for “step for two”, or I suppose “dance for two”. There is also a “pas de trois”, a piece for three dancers.

47. Particular paean penner : ODIST
A paean is a poem or song that expresses triumph or thanksgiving. “Paean” comes from the ancient Greek “paian” meaning “song of triumph”.

48. Ozone destroyers, for short : CFCS
Chlorofluorocarbons (CFCs) are the propellants that were once used in aerosols. CFCs make their way up into the ozone layer and trigger a chain reaction that converts ozone (O3) into regular oxygen (O2). That conversion creates “holes” in the ozone layer. Regular O2 is good stuff, but we need O3 to absorb harmful UV radiation raining down on us. CFC is not good stuff …

49. “What’s Hecuba to him, ___ to Hecuba”: Hamlet : OR HE
“Hamlet” is William Shakespeare’s longest play, and was also one of most popular of the playwright’s works during his lifetime.

50. Sinatra’s “Meet ___ the Copa” : ME AT
“Meet Me at the Copa” is a song recorded by Frank Sinatra in 1950. The Copa in the song is the Copacabana nightclub in New York City (which is also the subject of the Barry Manilow song “Copacabana”). The Copa opened in 1940, and is still going today although with difficulty. It had to move due to impending construction and is now “sharing” a location with the Columbus 72 nightclub.

51. Biblical miracle setting : CANA
According to the Christian Bible, Cana is the place where Jesus performed his first public miracle. Jesus was attending a wedding feast with his mother when the party ran out of wine. Jesus turned water into wine, wine that was judged to be the best served at the feast.

53. Touch : IOTA
Iota is the ninth letter in the Greek alphabet. We use the word “iota” to portray something very small as it is the smallest of all Greek letters.

54. Law school newbie : ONE L
While “One L” is a name used in general for first year law students, “One L” is also the title of an autobiographical narrative by author Scott Turow, telling of his experiences as a first year student at Harvard Law School.