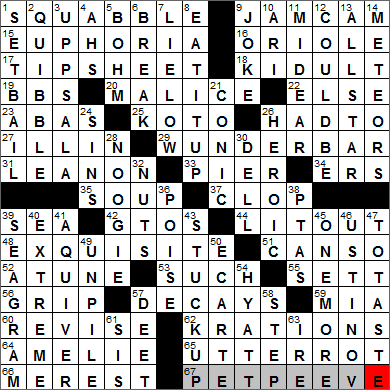 Today’s Wiki-est, Amazonian Googlies
Across
9. Traffic reporter’s aid : JAM CAM
I must assume a “jam cam” is a camera that shows traffic jams. Never heard of it …

16. Twin’s rival : ORIOLE
The Baltimore Orioles was one of the eight charter teams of MLB’s American League, so the franchise dates back to 1901. Prior to 1901, the team has roots in the Minor League Milwaukee Brewers, and indeed entered the American League as the Brewers. In 1902 the Brewers moved to St. Louis and became the Browns. The team didn’t fare well in St. Louis, so when it finally relocated to Baltimore in the early fifties the team changed its name completely, to the Baltimore Orioles. The owners so badly wanted a fresh start that they traded 17 old Browns players with the New York Yankees. The trade didn’t help the team’s performance on the field in those early days, but it did help distance the new team from its past.

The Minnesota Twins baseball team started out life as the Kansas City Blues in 1894, before becoming the Washington Senators in 1901. The team arrived in Minneapolis in 1961.

23. Overseas rebellion cry : A BAS
“À bas le roi” is French for, “Down with the king”, a phrase often heard during the French Revolution.

25. One may be played by a geisha : KOTO
The koto is a traditional stringed instrument, the national musical instrument of Japan.

34. Where many airways are cleared, briefly : ERS
Emergency Rooms (ERs)

35. Antithesis of 32-Down : SOUP
(32. Antithesis of 35-Across : NUTS)
The American expression “from soup to nuts” means “from beginning to end”. The idiom comes from the description of a full course dinner, with soup to start and nuts as a dessert.

37. Common sound in Amish country : CLOP
The Amish are a group of Christian churches, a sub-group of the Mennonite churches. The Amish church originated in Switzerland and Alsace in 1693 when it was founded by Jakob Ammann. It was Ammann who gave the name to the Amish people. Many Amish people came to Pennsylvania in the 18th century.

The 389 was a Pontiac V8 engine that had an engine displacement of 389 cubic inches.

48. Like Fabergé eggs : EXQUISITE
Fabergé eggs are beautiful jeweled eggs made by the House of Fabergé from 1885 to 1917. The tradition of fabricating the eggs started when Tsar Alexander III commissioned Fabergé to create a jeweled egg for his wife in 1885. After this, the House of Fabergé produced more and more elaborate designs, year after year.

55. Paving block : SETT
A sett is a small rectangular paving stone with a rounded top used to make a road surface. It’s like a cobblestone, I think …

62. They were labeled “Breakfast,” “Dinner” and “Supper” : K-RATIONS
“K-rations” were individual food rations issued by the US Army during WWII that were intended to be portable and for sustaining a soldier for short durations. At most, L-rations were intended to be consumed for 15 meals before the more nutritional and palatable A- or B-rations could be provided. K-rations are particularly associated with airborne troops, who often carried them into the field.

64. 2002 César winner for Best Film : AMELIE
“Amélie” is a French film, a romantic comedy about a shy waitress in Montmartre, Paris played by Audrey Tatou. The movie was originally released under the French title, “Le Fabuleux Destin d’Amélie Poulain” (“The Fabulous Destiny of Amélie Poulain”).

10. “The Guilt Trip” actress Graynor : ARI
Ari Graynor is an American actress who first came to national attention playing the character of Caitlin Rucker in a few episodes of the HBO series “The Sopranos”.

“The Guilt Trip” is a mildly amusing 2012 comedy starring Barbra Streisand and Seth Rogen. Streisand plays the mother of Rogen’s character, and the two end up taking a road trip together.

14. Planet threateners : METEORS
A shooting star is what we call the visible path of a meteoroid as is it enters the earth’s atmosphere. Almost all meteoroids burn up, but if one is large enough to survive and reach the ground, we call it a meteorite. The word “meteor” comes from the Greek “meteōros” meaning “high in the air”.

28. Result of knuckling down? : NOOGIE
A “noogie” is that childish move where someone rubs his (and it’s always a guy!) knuckles into a person’s head to create a little soreness.

39. Park Avenue’s ___ Building : SEAGRAM
The Seagram Building in New York City was designed by Ludwig Mies van der Rohe, and completed in 1958. The architect wanted the building to have a very uniform appearance, and even specified that window blinds couldn’t be left drawn in different positions. The original building blinds only operated in the open, closed or half-open positions.

46. 1967 Emmy winner for playing Socrates : USTINOV
Peter Ustinov was a fabulous actor from England. It has to be said though, he was multi-talented and I remember him as a great guest on the talk show circuit.

50. Game in which the lowest card is 7 : ECARTE
Écarté is a card game that comes to us from France, with a name that translates into ‘discarded”. Écarté is a game like whist but is played with a stripped-down deck and involves only two players.

54. Marriott rival : HYATT
The Hyatt hotel chain takes its name from the first hotel in the group, that was purchased in 1957 i.e. Hyatt House at Los Angeles International Airport. Among other things, Hyatt is famous for designing the world’s first atrium hotel, the Hyatt Regency in Atlanta.

Marriott Hotels developed their initial properties in the fifties. The first to open was the Quality Inn near Washington DC, the first purpose-built airport hotel in the country.

57. Preventer of many bites : DEET
DEET is short for N,N-Diethyl-meta-toluamide, an active ingredient in insect repellents. DEET is most often used to repel mosquitoes by applying it to the skin and/or clothing. It is also used to protect against tick bites.