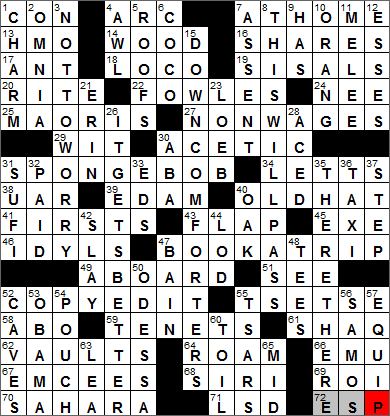 CROSSWORD SETTER: Jules P. Markey
THEME: Down Comforters … today’s themed answers are words of COMFORT, all written in the DOWN direction:

15A. Some bedcovers … or, literally, what the four unclued answers are : DOWN COMFORTERS

Today’s Wiki-est, Amazonian Googlies
Across
1. Pen denizen : CON
A convict (con) might be found in a penitentiary (pen).

Nowadays we use “denizen” to mean simply a resident, but historically a denizen was an immigrant to whom certain rights had been granted, something like today’s “resident alien”.

4. Go ballistic? : ARC
“Ballistics” is the study of the projectiles in movement.

19. Rug fibers : SISALS
I suppose it is telling that whenever I hear mention of agave plants, I think of tequila. The sisal plant is an agave, but as far as I can tell its flesh is not used in making the Mexican liquor. Sisal is grown instead for the fibers that run the length of its leaves. The fiber is used extensively for twine, rope, carpeting, wall coverings etc. My favorite application though, is in the construction of dartboards. Sisal takes its name from the port of Sisal in Yucatan, Mexico, once a major shipping point for sisal plants.

24. Formerly : NEE
“Née” is the French word for “born” when referring to a female. The male equivalent is “né”.

25. People for whom “tena koe” means “hello” : MAORIS
The Māori are the indigenous people of New Zealand. The Māori are eastern Polynesian in origin and began arriving in New Zealand relatively recently, starting sometime in the late 13th century. The word “māori” simply means “normal”, distinguishing the mortal human being from spiritual entities.

30. Like CH3CO2H : ACETIC
Acetic acid has the formula CH3COOH, and is the main component of vinegar.

31. Nicktoons character : SPONGEBOB
SpongeBob SquarePants is a cartoon character in a television series. He first appeared in 1999, and lives in a pineapple under the sea.

34. Rigans, e.g. : LETTS
Riga is the capital city of Latvia. The historical center of Riga is a UNESCO World Heritage Site, declared as such because of the city’s magnificent examples of Art Nouveau architecture.

38. Onetime Mideast org. : UAR
The United Arab Republic (UAR) was a union between Egypt and Syria made in 1958 and dissolved in 1961 when Syria pulled out of the arrangement.

39. Cheese selection : EDAM
Edam cheese takes its name from the Dutch town of Edam in North Holland. The cheese is famous for its coating of red paraffin wax, a layer of protection that helps Edam travel well and prevents spoiling. You might occasionally come across an Edam cheese that is coated in black wax. The black color indicates that the underlying cheese has been aged for a minimum of 17 weeks.

40. Quite familiar : OLD HAT
The use of “old hat” to mean something “out of date” started about 1911. Before that, the term “old hat” meant something very different, and very vulgar. “Old hat” was the name given to a very private part of a woman, the idea being that it was “often felt” (as in a “felt hat”). I just don’t know what to say …

46. Rustic poems : IDYLS
An idyl is a short poem with a pastoral theme, usually depicting the scene in romantic and idealized terms. The word comes from the Greek “eidyllion”, which literally translates to “little picture” but was a word describing a short, poem with a rustic theme.

51. Holy ___ : SEE
In the Roman Catholic Church, an episcopal see is the official seat of a bishop, and is usually described by the town or city where the bishop resides and has his cathedral. The most famous see in the church is called the Holy See, the episcopal see of the Bishop of Rome, the Pope.

52. Ready for publication : COPY EDIT
Copy editing is one of the last steps in the preparation of a publication. The process does not involve any changes to the substance of the text, but is focused on improving format, style and accuracy.

55. Trypanosome carrier : TSETSE
Tsetse flies live on the blood of vertebrate mammals. The name “tsetse” comes from Tswana, a language of southern Africa, and translates simply as “fly”. Tsetse flies are famous for being carriers of the disease known as “sleeping sickness”. Sleeping sickness is caused by a parasite which is passed onto humans when the tsetse fly bites into human skin tissue. If one considers all the diseases transmitted by the insect, then the tsetse fly is responsible for a staggering quarter of a million deaths each year.

58. Red Cross letters : ABO
The most important grouping of blood types is the ABO system. Blood is classified as either A, B, AB or O, depending on the type of antigens on the surface of the red blood cells. A secondary designation of blood is the Rh factor, in which other antigens are labelled as either positive or negative. When a patient receives a blood transfusion, ideally the donor blood should be the same type as that of the recipient, as incompatible blood cells can be rejected. However, blood type O-neg can be accepted by recipients with all blood types, A, B, AB or O, and positive or negative. Hence someone with O-neg blood type is called a “universal donor”.

59. Guideposts : TENETS
A tenet is an article of faith, something that is held to be true. “Tenet” is Latin for “he holds”.

64. Gad about : ROAM
“To gad about” is to move around with little purpose. The word “gad” comes from the Middle English “gadden” meaning “to hurry”.

66. Part of the Australian coat of arms : EMU
The official symbol of Australia is a coat of arms that features a kangaroo and an emu.

67. Hosts : EMCEES
“Emcee” come from “MC”, an acronym standing for Master or Mistress of Ceremonies.

68. Her “birthday” is Oct. 4, 2011 : SIRI
Siri is software application that works with Apple’s iOS operating system. “Siri” is an acronym standing for Speech Interpretation and Recognition Interface. You’ve probably seen the ads on television, with folks talking to their iPhones asking for information and responding with a voice. I hear that Google is a little scared by Siri, as Siri is non-visual. There’s no need to touch a screen or a keyboard to work with Siri, no opportunity to click on one of Google’s ads! By the way, voice-over artist Susan Bennett recently revealed herself as the female American voice of Siri.

70. Much of Mauritania : SAHARA
The Islamic Republic of Mauritania is a country in North Africa, on the Atlantic coast. The country is named after the old Roman province of Mauretania, although the ancient province was located further north in what is now Morocco and part of Algeria.

71. Acid : LSD
LSD (colloquially known as “acid”) is short for lysergic acid diethylamide. A Swiss chemist called Albert Hofmann first synthesized LSD in 1938 in a research project looking for medically efficacious ergot alkaloids. It wasn’t until some five years later when Hofmann ingested some of the drug accidentally that its psychedelic properties were discovered. Trippy, man …

Down
1. Mojo : CHARM
The word “mojo”, meaning magical charm or magnetism, is probably of Creole origin.

2. ___ vincit amor : OMNIA
“Omnia vincit amor” is a line from Eclogue X, one of the major works of the Latin poet Virgil. We know the phrase in English as “love conquers all”.

The so called “War for Late Night” of 2010 involved Conan O’Brien and Jay Leno. O’Brien had stayed loyal to NBC on the understanding that he would take over “The Tonight Show” after Jay Leno retired. When Leno’s contract expired in 2009, NBC moved Leno aside, with his agreement, and O’Brien took over. But Leno then hosted a new spot in prime time called “The Jay Leno Show”, and apparently the two shows split the traditional late night audience, much to the annoyance of advertisers. NBC reacted by moving Leno back to the late night slot, and mayhem ensued!

10. Malay for “human” : ORANG
Orangutans are arboreal creatures, in fact the largest arboreal animals known to man. They are native to Indonesia and Malaysia, living in the rain forests. Like most species in rain forests these days, orangutans are endangered, with only two species surviving. The word “orangutan” is Malay, meaning “man of the forest”.

11. Fray : MELEE
Our word “melee” comes from the French “mêlée”, and in both languages the word means a “confused fight”.

12. Bookends on shelves? : ESSES
“Shelves” has letters S (esses) as “bookends”, letters on each end of the word.

21. The Emerald Isle : ERIN
“Éire”, is the Irish word for “Ireland”. “Erin” is an anglicized version of “Éire” and actually corresponds to “Éirinn”, the dative case of “Éire”.

And of course Ireland is called the “Emerald Isle” because of all that green caused by all that rain.

23. Harvard University Press’s ___ Classical Library : LOEB
The Loeb Classical Library is a series of works from Ancient Greek and Latin literature published by Harvard University Press. Each work includes a translation throughout, with the original language on the left page and the equivalent English on the right. The series takes its name from the philanthropist James Loeb who came up with the idea for the collection and providing the initial funding.

36. Fleet vehicle : TAXI
We call cabs “taxis”, a word derived from “taximeter cabs” that were introduced in London in 1907. A taximeter was an automated meter designed to record distance travelled and fare to be charged. The term “taximeter” evolved from “taxameter”, with “taxa” being Latin for “tax, charge”.

El Al Israel Airlines is the flag carrier of Israel. The term “el al” translates from Hebrew as “to the skies”.

47. ___ Capital : BAIN
Bain Capital is a private equity firm headquartered in the Hancock Building in Boston, Massachusetts. Bain Capital was in the news not so long ago, as one of the three founders was Governor Mitt Romney.

50. Black Sea port : ODESSA
The city of Odessa (also “Odesa”) in Ukraine was founded relatively recently, in 1794 by Catherine the Great. The city was originally meant to be called Odessos after an ancient Greek city believed to have been located nearby. Catherine liked the way the locals pronounced the name as “Odessa” and so went with the less Greek-sounding name.

52. Cries uncle : CAVES
To “say uncle” is an American expression meaning to submit or yield. Its usage dates back to the early 1900s, but nobody seems to know how “uncle!” came to mean “stop!”

55. Several Peters : TSARS
There were three tsars of Russia named Peter: Peter I (“the Great”), Peter II and Peter III.

56. Aegean island : SAMOS
Samos is an island in the eastern Aegean Sea off the coast of Greece. Samos is the birthplace of the famed mathematician Pythagoras, the philosopher Epicurus, and the astronomer Aristarchus of Samos. The latter was the first person known to have proposed that the Earth revolves around the sun.