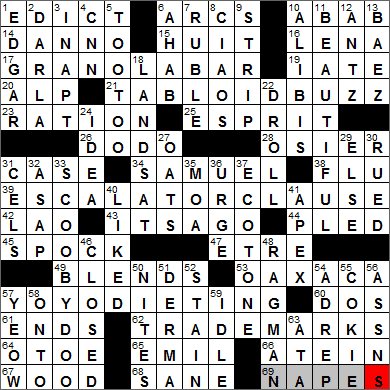 17A. Hiker’s snack : GRANOLA BAR
21A. What’s being discussed in the National Enquirer or Globe : TABLOID BUZZ
39A. Provision in many a construction contract : ESCALATOR CLAUSE
57A. Poor weight-loss practice : YO-YO DIETING
62A. Intellectual property protection … or what the starts of 17-, 21-, 39- and 57-Across once were : TRADEMARKS

Today’s Wiki-est, Amazonian Googlies
Across
10. Basic quatrain scheme : ABAB
A quatrain is a group of four lines of poetry. The most common quatrain schemes are AAAA, AABB and ABAB.

16. Olin of “Chocolat” : LENA
The lovely Lena Olin is a Swedish actress, clearly someone who had acting in her blood. Her mother was the actress Britta Holmberg and her father the actor and director Stig Olin. Olin had a very successful career in Sweden, often working with the great Ingmar Bergman. Olin’s breakthrough international and English-speaking role was playing opposite Daniel Day-Lewis in “The Unbearable Lightness of Being” released in 1988. Way back in 1974, the lovely Miss Olin was crowned Miss Scandinavia in a beauty pageant for Nordic women held in Helsinki, Finland.

17. Hiker’s snack : GRANOLA BAR
The name “Granola” (and “Granula”) were trademarked back in the late 1800s for whole grain foods that were crumbled and baked until crisp. Granola was created in Dansville, New York in 1894.

21. What’s being discussed in the National Enquirer or Globe : TABLOID BUZZ
“Tabloid” is the trademarked name (owned by Burroughs, Wellcome and Co,) for a “small tablet of medicine”, a name that goes back to 1884. The word “tabloid” had entered into general use to mean a compressed form of anything, and by the early 1900s was used in “tabloid journalism”, applied to newspapers that had short, condensed articles and stories printed on smaller sheets of paper.

25. Quick wit : ESPRIT
Our word “esprit”, meaning “liveliness of mind”, comes to us from Latin via French. The Latin “spiritus” means “spirit.

26. Airhead : DODO
A dodo is a foolish person, and dodo is word that comes into English from the Portuguese “doudo”. “Doudo” was a slang term used by Portuguese sailors for the extinct bird that we now know as the dodo.

28. Willow twig : OSIER
Most willows (trees and shrubs of the genus Salix) are called just that, willows. Some of the broad-leaved shrub varieties are called sallow, and the narrow-leaved shrubs are called osier. The variety known as osier is commonly used in basketry, as osier twigs are very flexible.

34. Adams in a bar : SAMUEL
Samuel Adams was one of the Founding Fathers of the United States, from Boston Massachusetts. Adams followed his father into the family’s malthouse business a few years after young Samuel graduated from Harvard. There were generations of Adams family members who were “maltsters” i.e. those producing malt needed for making beer. Samuel Adams is often described as a brewer, but he was actually a malster. The Samuel Adams brand of beer isn’t directly associated with the Adams family, but it is named in honor of the patriot.

38. Winter woe : FLU
Influenza is an ailment that is caused by a virus. The virus is readily deactivated by the use of soap, so washing hands and surfaces is especially helpful in containing flu outbreaks.

39. Provision in many a construction contract : ESCALATOR CLAUSE
An escalator clause in a contract is a provision dictating that an amount can change under certain conditions. For example, wage rate might be linked with the cost of living index.

42. Asian language with no plural form : LAO
The official name for the country of Laos is the Lao People’s Democratic Republic. In the Lao language, the country’s name is “Meuang Lao”. The French ruled Laos as part of French Indochina, having united three separate Lao kingdoms. As there was a plural of “Lao” entities united into one, the French added the “S” and so today we tend to use “Laos” instead of “Lao”.

45. “Live long and prosper” speaker : SPOCK
Leonard Nimoy played the logical Mr. Spock in the original “Star Trek” television series. Spock has to be the most popular character on the show, and he keeps popping up in “Star Trek” spin offs to this day. Nimoy first worked alongside William Shatner (Captain Kirk) in an episode of “The Man from U.N.C.L.E.” (I loved that show!), with Nimoy playing a bad guy and Shatner playing an U.N.C.L.E. recruit.

53. Modern home of the ancient Zapotec civilization : OAXACA
Oaxaca is a state in the southern part of Mexico on the Pacific coast. The state takes the name of Oaxaca, its largest city.

57. Poor weight-loss practice : YO-YO DIETING
Would you believe that the first yo-yos date back to 500 BC? There is even an ancient Greek vase painting that shows a young man playing with a yo-yo. Centuries later Filipinos were using yo-yos as hunting tools in the 1500s. “Yo-yo” is a Tagalog (Filipino) word meaning “come-come” or simply “return”.

64. Siouan tribe : OTOE
The Otoe (also Oto) Native American tribe originated in the Great Lakes region as part of the Winnebago or Siouan tribes. The group that would become the Otoe broke away from the Winnebago and migrated southwestwards ending up in the Great Plains. In the plains the Otoe adopted a semi-nomadic lifestyle dependent on the horse, with the American bison becoming central to their diet.

65. Jannings who won the first Best Actor Oscar : EMIL
Emil Jannings, an actor from Switzerland, was the first person to receive an Oscar. He was given the award for Best Actor at the 1929 ceremony for his work on two films: “The Way of All Flesh” and “The Last Command”. Interestingly, Jannings did not garner the highest number of votes, but the Academy awarded him the Oscar anyway. The highest number of votes for that first Oscar actually went to Rin Tin Tin, the German Shepherd dog!

Down
1. Mystery prize : EDGAR
The Edgar Allan Poe Awards (the Edgars) are presented annually by the Mystery Writers of America.

2. Friend of Porky and Spanky : DARLA
Alfalfa’s love interest in “Our Gang” was Darla, whose real name was Darla Hood. Hood became quite a successful singer after she grew out of the “Our Gang” role.

Hal Roach made a whole series of comedy shorts with “The Little Rascals”, also known as “Our Gang”. This very likable bunch of kids included Spanky and his kid brother, Porky. Porky had a speech impediment so he couldn’t pronounce “Okay, Spanky” very clearly and it came out as “Otay, Panky”.

4. Fox News rival : CNN
CNN (Cable News Network) was launched in 1980, and was the first television channel in the world to provide news coverage 24 hours a day.

6. Starbuck’s boss : AHAB
Starbucks is a coffee company based in Seattle, Washington. It is the largest coffeehouse company in the world and has over 19,000 stores. In the 1990s, Starbucks was opening one new store every single day! Starbucks is named after the chief mate on the Pequod in the Herman Melville book “Moby Dick”.

7. Change in Russia : RUBLE
The ruble (also “rouble”) is the unit of currency in Russia, as well as several other countries of the former Soviet Union. One ruble is divided into one hundred kopecks.

8. Bye lines? : CIAOS
“Ciao” is the Italian for “‘bye”. “Arrivederci” is more formal, and translates better as “goodbye”.

9. “Dilbert” or “Doonesbury” : STRIP
“Dilbert” is a comic strip written by Scott Adams, a “neighbor” of mine here in the Bay Area. Adams used to own a nice restaurant at the end of my street …

When cartoonist Garry Trudeau was deciding on a name for his comic strip in 1970, he opted for “Doonesbury”. He combined “doone”, which is slang for a “genial fool”, and the last syllables in “Pillsbury”, the family name of Trudeau’s roommate while he was at Yale.

10. Cover stories : ALIBIS
“Alibi” is the Latin word for “elsewhere” as in, “I claim that I was ‘elsewhere’ when the crime was committed … I have an ‘alibi'”.

12. Animated bug film : ANTZ
“Antz” was the first feature movie released by Dreamworks SKG, the studio founded by Steven Spielberg and two partners in 1994. “Antz” came out in 1998, and has a stellar cast that includes Woody Allen, Sharon Stone, Sylvester Stallone, Gene Hackman and many, many other big names. The cartoon is quite unique in that the facial features of the voice actors are reflected in the animated characters.

13. Singer of many Dylan songs : BAEZ
Joan Baez is an American folk singer and a prominent activist in the fields of nonviolence, civil rights, human rights and environmental protection. Baez has dated some high-profile figures in her life including Bob Dylan, Steve Jobs (of Apple) and Mickey Hart of the Grateful Dead.

As we all know, the real name of singer Bob Dylan is Robert Zimmerman. Zimmerman chose that particular stage name because he was greatly influenced by the poetry of the Welsh poet, Dylan Thomas.

18. Imager of the earth’s surface : LANDSAT
Landsat is a series of satellites tasked with imaging the Earth’s surface. The first satellite in the series was launched back in 1972 and the latest, the seventh, in 1999. The eighth satellite went into orbit in 2013.

22. Waggish : DROLL
A “wag” or a “card” is a very amusing person, often quite eccentric.

31. Ones drawn to film? : CELS
In the world of animation, a cel is a transparent sheet on which objects and characters are drawn. In the first half of the 20th century the sheet was actually made of celluloid, giving the “cel” its name.

33. Shaggy’s dog : SCOOBY-DOO
“Scooby-Doo, Where Are You!” is a series of cartoons produced for Hanna-Barbera Productions, first broadcast in 1969.

Not only is Casey Kasem so closely associated with the radio show “American Top 40”, but he is also well known for playing the voice of Shaggy Rogers on the “Scooby-Doo” animated series.

35. Extinct ostrichlike bird : MOA
Moas were flightless birds native to New Zealand that are now extinct. The fate of the Moa is a great example of the detrimental effect that humans can have on animal populations. The Maoris arrived in New Zealand about 1300 AD, upsetting the balance of the ecosystem. The Moa were hunted to extinction within 200 years, which had the knock-on effect of killing off the Haast’s Eagle, the Moa’s only predator prior to the arrival of man.

37. Transitional zone between plant communities : ECOTONE
An ecotone is a transition area between two different types of land that sit adjacent to each other.

41. Zenith : APEX
In the celestial world, an apsis is a point in an orbit when the orbiting body is at its greatest, or least, distance from it’s center of orbit. The farthest and closest points of orbit are known as the apogee and perigee, when talking about bodies orbiting the Earth. The farthest and closest points for bodies orbiting the sun are known as the aphelion and perihelion.