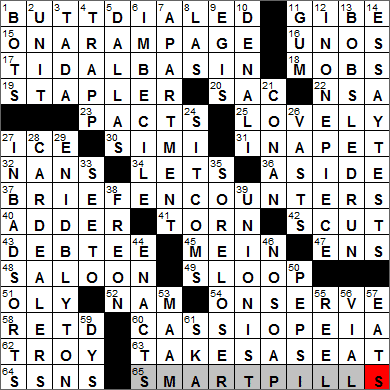 17. Washington, D.C., has a famous one : TIDAL BASIN
The Tidal Basin in Washington, D.C. is a reservoir that sits between the Potomac River and Washington Channel. The basin is surrounded by several of the city’s famous memorials including the Jefferson Memorial, my personal favorite. The basin is also surrounded by the famous cherry blossoms that were given to the city as a gift from the Mayor of Tokyo, Japan in 1912.

19. One working in a corner in an office? : STAPLER
IN an office, a stapler is used to pin papers together at the corner of the page.

20. Eastern Woodlands native : SAC
The Sacs are a group of Native Americans, who probably originated in the northeast along the St. Lawrence River. Over time, they migrated south and west, and after a turbulent journey ended up on reservations in Oklahoma. The Meskwaki tribe is also known as the Fox, and had similar origins as the Sacs, and similar migrations. The two tribes eventually merged into the Sac and Fox Nation.

22. Noted eavesdropper, for short : NSA
The National Security Agency (NSA) was set up in 1952 by President Truman, a replacement for the Armed Forces Security Agency that had existed in the Department of Defense since 1949. The NSA has always been clouded in secrecy and even the 1952 letter from President Truman that established the agency was kept under wraps from the public for over a generation. I really like the organization’s nickname … “No Such Agency”.

23. Covenants : PACTS
A covenant is an agreement, coming from the Latin verb “convenire” meaning “to come together”.

30. ___ Valley : SIMI
Nowadays Simi Valley is perhaps best known as being home to the Ronald Reagan Presidential Library. If you ever get the chance to do so, the library is a great place to visit. There you can tour one of the retired Air Force One planes.

32. Tandoori-baked fare : NANS
Naan (also “nan”) bread is very popular in Indian restaurants, as well as in other West, Central and South Asian cuisines. Indian Naan is traditionally baked in a clay oven known as a tandoor.

42. ___ work : SCUT
“Scutwork” is monotonous work, tasks that need to be done in order to complete a larger project. “Scut” is an informal term that describes a worthless person.

48. “Gunsmoke” setting : SALOON
“Gunsmoke” is a Western drama series that originally aired on television from 1955 to 1975, with James Arness starring as Marshall Matt Dillon. The TV show was adapted from a radio show of the same name that ran from 1952 to 1961, with William Conrad playing Marshall Dillon.

49. Marina sight : SLOOP
Sloops and cutters are sailboats, and each has just one mast. One major difference between the two types of vessel is that the mast on a cutter is set much further aft than the mast on a sloop.

51. Classic Northwest brewski : OLY
The Olympia Brewing Company was founded in the town of Tumwater, Washington in 1896, by German immigrant Leopold Schmidt.

52. Charlie’s land : NAM
During the Vietnam War, the Viet Cong were referred to as “the VC”. “VC” could be extended to “Victor Charlie” in the phonetic alphabet, and this was shortened to “Charlie”, a military slang term for the Viet Cong and other Communists.

60. Mother of Andromeda : CASSIOPEIA
Cassiopeia was a figure in Greek mythology, a queen who was said to be very arrogant and vain. Cassiopeia boasted that both she and her daughter, Andromeda, were more beautiful than the daughters of the sea god Nereus (the Nereids). This boast brought on the wrath of the main sea god Poseidon. Cassiopeia was told that the only way to appease the sea gods was to sacrifice her daughter. Andromeda was chained to a rock at the edge of the sea and left to await her fate. The along comes the hero Perseus who saves the maiden and marries her.

62. “Iliad” locale : TROY
The Iliad is an epic poem by the Greek poet Homer, which tells the story of the siege of Ilium (also known as Troy) during the Trojan war.

64. Job application info, for short : SSNS
The main purpose of a Social Security Number (SSN) is to track individuals for the purposes of taxation, although given its ubiquitous use, it is looking more and more like an “identity number” to me. The social security number system was introduced in 1936. Prior to 1986, an SSN was required only for persons with substantial income so many children under 14 had no number assigned. For some years the IRS had a concern that a lot of people were claiming children on their tax returns who did not actually exist. So, from 1986 onward, it is a requirement to get an SSN for any dependents over the ago of 5. Sure enough, in 1987 seven million dependents “disappeared”.

65. Nootropics, more familiarly : SMART PILLS
“Nootropics” are drugs and nutrients that supposedly improve cognitive function. The term “nootropic” comes from the Greek for “mine bend”.

Down
1. Internet prowlers : BOTS
A bot is computer program that is designed to imitate human behavior. It might “crawl” around the Web doing searches for example, or it might participate in discussions in chat rooms by giving pre-programmed responses.

4. Georg von ___ : TRAPP
Baron Georg Johannes von Trapp was an officer in the Austro-Hungarian Navy who achieved worldwide fame when his family became the inspiration for the musical “The Sound of Musical”.

“The Sound of Music” is a Rodgers and Hammerstein musical made into a celebrated movie in 1965 starring Julie Andrews and Christopher Plummer. The musical is based on “The Story of the Trapp Family Singers”, a memoir by Maria von Trapp. The von Trapp family ended up in Stowe, Vermont after the war and one family descended from the Vermont von Trapps lives here in the same town in which I reside in California.

5. Vice president after whom a U.S. city is thought to have been named : DALLAS
George M. Dallas was US Vice President from 1845 to 1849, serving under President James K. Polk. Dallas had also be a US Senator representing Pennsylvania. There is a theory that the Texas city of Dallas was named after him, although there are alternative suggestions about the etymology of the city’s name.

6. Ninny : IMBECILE
The rather unsavory term “imbecile” was formerly used by the medical community to describe someone with moderate to severe mental retardation. The term comes from the Latin “imbecillus” meaning “weak, feeble”, which was extended to mean “weak-minded”. Back in the early 1900s, IQ tests were used to classify those suffering from mental retardation into categories:

8. ___ Palmas : LAS
Gran Canaria, or Grand Canary Island, may be grand but it isn’t quite as big as Tenerife, the largest island of the group and the most populated. The capital of Gran Canaria is Las Palmas, which was a port of call for Christopher Columbus in 1492 on his way to the Americas.

9. Breastplate of Athena : EGIS
Someone is said to be under the aegis (also “egis”) of someone else (for example) if that other person provides protection, or perhaps sponsorship. The word “aegis” comes from the Greek word for a goat (“aigis”), the idea being that the goatskin shield or breastplate worn by Zeus or Athena, gave some measure of protection.

10. “The High One” : DENALI
Denali means “the high one” in the native Athabaskan language, and is now the name used for Mount McKinley. I was surprised to learn that there is a Denali State Park, as well as the Denali National Park. The two are located adjacent to each other (which makes sense!). The State Park is undeveloped for all practical purposes, with just a few campgrounds and trailheads.

13. Winter Olympics sight : BOBSLED RUN
“Bobsleds” are so called because competitors in the sport originally would bob in and out of the sled in order to increase its speed.

14. They use blue books : ESSAY TESTS
“Blue book exam” is a term used for a test given at many colleges in the US. Blue book exams usually involve the writing of essays. The first blue book exams were administered by Butler University in Indianapolis, and the “blue” was chosen because Butler’s school colors are blue and white. The color blue is still commonly used regardless of which school is giving the test, although other colors can be used.

21. TV show headed by a former writer for “S.N.L.” : CONAN
Before Conan O’Brien came to fame as a late night talk show host, he was a writer. O’Brien wrote for both “Saturday Night Live” (SNL) and “The Simpsons”.

24. “Mom” and “Mama’s Family” : SITCOMS
“Mom” is a sitcom starring Anna Farris and the great Allison Janney that premiered in 2013.

“Mama’s Family” is a sitcom that first ran from 1983 to 1984, and is a spin-off show from “The Family” series of sketches on “The Carol Burnett Show” and “Carol & Company”. Stars of “Mama’s Family” are Vicki Lawrence and Thelma Harper (who plays Mama).

28. They use Blue Books : CAR DEALERS
I think we tend to associate the term “blue book” with the Kelley Blue Book that provides valuations for vehicles. The term itself dates back to the 15th century when we started calling an almanac or other publication full of information a “blue book”.

29. “The Wishing-Chair” series creator : ENID BLYTON
Enid Blyton wrote stories for children that were very popular when I was growing up in the British Isles. Not so long ago I purchased and reread my favorite of her stories growing up, a children’s novel called “The Secret Island”.

38. Kind of compressor : FREON
Freon is a tradename for a group of compounds used as a refrigerant and also as a propellant in aerosols. Freon is used in the compressors of air conditioners as a vital component in the air-cooling mechanism

39. Yankee, once : UNIONIST
The term “Yankee” originated back in the 1600s when Dutch settlers used to called English colonists “Jankes”, a disparaging term meaning “Little Johns”.

50. #2 pop : PEPSI
The Pepsi-Cola formulation was developed by one Caleb Bradham who made the drink at home and sold it as “Brad’s Drink”. Bradham’s aim was to provide a drink that was pleasant to taste, that would aid digestion and boost energy. Included in the formula were pepsin (a digestive enzyme) and kola nuts. These two ingredients inspired the Pepsi Cola brand name that is used today.

61. 2 Tone influence : SKA
Ska originated in Jamaica in the late fifties and was the precursor to reggae music. No one has a really definitive etymology of the term “ska”, but it is likely to be imitative of some sound.

2 Tone is a music genre that fuses ska, punk rock, reggae and new wave. The genre was created in England in the late seventies. The most famous 2 Tone band was probably the Specials.