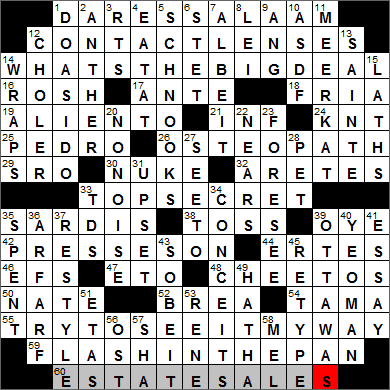 Today’s Wiki-est, Amazonian Googlies
Across
1. African city of 4+ million whose name means, literally, “haven of peace” : DAR ES SALAAM
Dar es Salaam is the largest city in Tanzania, and sits right on the east coast of Africa. The city’s name is usually translated from Arabic as “Haven of Peace”.

16. Start of a Jewish holiday? : ROSH
Rosh Hashanah is loosely referred to as “Jewish New Year”. The literal translation from Hebrew is “head of the year”.

18. Arizona’s Agua ___ River : FRIA
The Agua Fria River that runs from a spot near the city of Prescott, Arizona south through the Agua Fria National Monument and into Lake Pleasant located near Peoria, Arizona. “Agua Fria” translates from Spanish as “Cold Water”.

Tilting is the most recognized form of jousting. Jousting can involve the use of a number of different weapons, but when lances are used the competition is called “tilting”. Jousting took place in a roped-off enclosure that was called the lists, or list field. In later medieval times, some castles and palaces had purpose-built “tiltyards” that were used for jousting. Do you remember where the Beach Volleyball events were held in the 2012 London Olympics. Well that was Horse Guards Parade, the former tiltyard for the Palace of Whitehall that was used in the time of King Henry VIII.

25. ___ Ximénez (dessert sherry) : PEDRO
Pedro Ximénez is a white grape that grows in parts of Spain. Pedro Ximénez is also the name given to a sweet, dark sherry made from the grape. The grape is named for a soldier who is said to have brought the original cuttings from the Rhine region.

32. Range ridges : ARETES
An arete is ridge of rock defining the border between two parallel valleys that have been formed by glaciation. If the ridge between the valleys is rounded, it is called a “col”. However if it is “sharpened”, with rock falling way due to successive freezing and thawing, then it is called an “arete”. “Arête“ is the French word for “fish bone”.

35. Eatery where the Tony Award was born : SARDI’S
Sardi’s is a renowned restaurant in the Theater District of Manhattan. Sardi’s is famous for attracting celebrities who pose for caricatures that are then displayed on the restaurant’s walls. After the death of actress and director Antoinette Perry in 1946, her friend and partner Brock Pemberton was having lunch at Sardi’s and came up with idea of a theater award that could be presented in Perry’s honor. The award was to be called the Tony Award.

44. Some Deco pieces : ERTES
Erté was the pseudonym of French artist (Russian born) Romain de Tirtoff. Erté is the French pronunciation of his initials “R.T.”

48. Frito-Lay snack : CHEETOS
Cheetos snacks were developed by the same guy who created Fritos, hence the name. They’ve been on the market since 1948, and up until the turn of the century the name was written “Chee-tos”. Oh, and Cheetos contain pork enzymes, so vegetarians beware!

50. Silver of fivethirtyeight.com : NATE
Nate Silver is a statistician who first gained notoriety by developing a forecasting system that predicted the future performance of baseball players. He then made a name for himself in the world of politics by predicting the outcome of the 2008 US presidential race. Silver successfully predicted the outcome of the election in 49 of the 50 states, missing out on Indiana, which Barack Obama won by less than 1% of the vote.

FiveThirtyEight is a website that publishes compiled polling date during election cycles. The site takes its name from from the total number of electors in the US electoral college.

52. California city near Fullerton : BREA
The city of Brea, California takes its name from “brea”, the Spanish word for “tar”. Back in the 1800s, entrepreneurs were attracted to the area by the “black gold” (crude oil) that was bubbling up from the ground in some instances.

54. Author Janowitz : TAMA
Tama Janowitz is an American writer. Janowitz was born in San Francisco but has lived much of her life in New York City. In New York she hung around with the likes of Andy Warhol and became well known in literary circles. Her most famous work is a collection of short stories called “Slaves of New York”, which was made into a film of the same name in 1989.

5. Dopes : SCHNOOKS
A “schnook” is a person who is easily cheated, someone who is extremely gullible. The term comes into English from Yiddish.

6. Restoration notation : STET
“Stet” is a Latin word meaning “let it stand”. In editorial work, the typesetter is instructed to disregard any change previously marked by writing the word “stet” and then underscoring that change with a line of dots or dashes.

7. Even though : ALBEIT
“Albeit” is such a lovely word, meaning “even though”. The term is a contraction of “although it be that”, dating back to the 14th century.

8. Polynesian island chain? : LEI
“Lei” is the Hawaiian word for “garland, wreath”, although in more general terms a “lei” is any series of objects strung together as an adornment for the body.

9. Lee with an Oscar : ANG
Taiwanese director Ang Lee sure has directed a mixed bag of films, mixed in terms of genre but not in terms of quality. He was at the helm for such classics as “Sense & Sensibility” (my personal favorite), “Crouching Tiger, Hidden Dragon”, “Hulk”, “Brokeback Mountain” and “Life of Pi”.

10. Home row sequence : ASDF
ASDF is a sequence of keys on the home row of keyboard.

11. Kalahari Desert dweller : MEERKAT
Timon and Pumbaa are a pair of characters in Disney’s “The Lion King”, a meerkat and warthog.

12. Irritability : CHOLER
“Choler” is “anger, irritability”. Choler (also “cholera”) was one of the body’s four basic substances, the so-called four humors. All diseases were caused by these four substances getting out of balance. The four humors were:

15. Foundation for some roofing : LATHS
The words “lath” and “lattice” have the same root in Old French. Laths are thin strips of wood that are nailed across a frame forming a backing to which plaster can be applied to finish a wall.

33. What some bombs result in, in brief : TDS
In American football, a “bomb” is a long forward pass.

36. Pair of boxers? : ARF! ARF!
The boxer breed of dog (one of my favorites!) originated in Germany. My first dog was a boxer/Labrador mix, a beautiful animal. Our current family dog is a boxer/pug mix, another gorgeous creature.

39. Pontiac and others : OTTAWAS
Chief Pontiac was a leader of the Ottawa people in the 1700s. He is most famously associated with the fight against the British (called Pontiac’s Rebellion) after they emerged victorious from the French and Indian War. The most noted action during the rebellion was the attack led by Pontiac on Fort Detroit, and the subsequent siege. Although the siege was unsuccessful, it served to unite the local Native American peoples in the fight.

40. “Star Trek” extra : YEOMAN
In the US Navy, a yeoman is tasked with administrative and clerical work. In fact the position of yeoman is the oldest rating in the navy. You’ll see a lot of yeomen in the background on “Star Trek”.

49. Kind of yoga : HATHA
Hatha yoga is a yoga system developed in 15th century India. Traditional Hatha yoga is a more “complete” practice than often encountered in the west, involving not just exercise but also meditation and relaxation.

53. Clément with two Oscar-winning films : RENE
René Clément was a director and screenwriter from France. Clément won an Oscar for Best Foreign Language Film on two occasions: “The Walls of Malapaga” (1949) and “Forbidden Games” (1952).

Düsseldorf lies in the west of Germany, fairly close to the border with France, and sits on the River Rhine.

58. Allen of play-by-play : MEL
For many years, the sportscaster Mel Allen was the play-by-play announcer for the New York Yankees. Allen was also the first host of television’s “This Week in Baseball”.