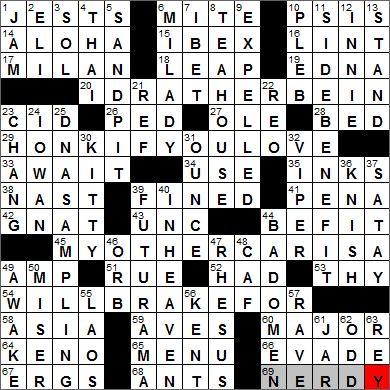 Today’s Wiki-est, Amazonian Googlies
Across
6. Tiny arachnid … or tiny amount : MITE
Mites are tiny arthropods in the arachnid (spider) class. Mites are (annoyingly!) very successful creatures that have adapted to all sorts of habitats, and being so small, they generally pass unnoticed. Ick …

15. Wild mountain goat : IBEX
Ibex is a common name for various species of mountain goat. “Ibex” is a Latin name that was used for wild goats found in the Alps and Apennines in Europe.

17. Italian city with a semiannual fashion week : MILAN
Milan is Italy’s second largest city, second only to Rome. Milan is a European fashion capital, the headquarters for the big Italian fashion houses of Valentino, Gucci, Versace, Armani, Prada and others. Mario Prada was even born in Milan, and helped establish the city’s reputation in the world of fashion.

19. ___ Krabappel of “The Simpsons” : EDNA
In “the Simpsons” television show, Bart Simpson’s teacher is one Edna Krabappel.

23. Spanish hero El ___ : CID
Rodrigo Diaz de Vivar was known as El Cid Campeador, which translates as “The Champion” or perhaps “The Lord, Master of Military Arts”. El Cid was a soldier who fought under the rule of King Alfonso VI of Spain (among others). However, he was sent into exile by the King in 1080, after acting beyond his authorization in battle. El Cid then offered his services to his former foes, the Moorish kings, After a number of years building a reputation with the Moors, he was recalled from exile by Alfonso. By this time El Cid was very much his own man. Nominally under the orders of Alfonso, he led a combined army of Spanish and Moorish troops and took the city of Valencia on the Mediterranean coast, making it is headquarters and home. He died there, quite peacefully in 1099.

27. Cheer for a torero : OLE
“Toreador” is an old Spanish word for a bullfighter, but it’s a term not used any more in Spain nor in Latin America. In English we use the term “toreador”, but in Spanish a bullfighter is a “torero”. A female bullfighter in a “torera”.

42. Buzzing pest : GNAT
Gnats are attracted to the smell of rotting food, and to vinegar. Simple homemade traps that use vinegar are often constructed to attract and kill gnats.

43. Chapel Hill sch. : UNC
The University of North Carolina at Chapel Hill started enrolling students way back in 1795, making it the oldest public university in the country (the first to enrol students).

49. Piece of stage equipment : AMP
An electric guitar, for example, needs an amplifier (amp) to take the weak signal created by the vibration of the strings and turn it into a signal powerful enough for a loudspeaker.

59. Madison and Fifth, e.g.: Abbr. : AVES
Madison Avenue became the center of advertising in the US in the twenties, and serves as the backdrop to the great TV drama “Mad Men”. There aren’t many advertising agencies left on Madison Avenue these days though, as most have moved to other parts of New York City. The street takes its name from Madison Square, which is bounded on one side by Madison Avenue. The square in turn takes its name from James Madison, the fourth President of the United States.

64. Casino game with numbered balls : KENO
The name “Keno” has French or Latin roots, with the French “quine” being a term for five winning numbers, and the Latin “quini” meaning “five each”. The game originated in China and was introduced into the West by Chinese immigrants who were working on the first Transcontinental Railroad in the 1800s.

67. Small fractions of joules : ERGS
An erg is a unit of energy or mechanical work. “Erg” comes from the Greek word “ergon” meaning “work”. A dyne is a unit of force. The name “dyne” comes from the Greek “dynamis” meaning “power, force”. Ergs and dynes are related to each other in that one erg is the amount of energy needed to move a force of one dyne over a distance of one centimeter.

Down
2. Inventor Whitney : ELI
The inventor Eli Whitney is a best known for inventing the cotton gin. Whitney also came up with the important concept of “interchangeable parts”. Parts that are interchangeable can be swapped out of equipment or perhaps used in related designs.

8. Place to sip oolong : TEA HOUSE
The name for the Chinese tea called “oolong” translates into English as “black dragon”.

10. Commoner : PLEB
“Plebe” is a slang term for a freshman in the US military and naval academies. Plebe is probably short for “plebeian”, the name given to someone of the common class in Ancient Rome (as opposed to a Patrician). “Pleb” is a shortened version of plebeian, and is a term used outside of the military schools.

22. Vintage car inits. : REO
The REO Motor Company was founded by Ransom E. Olds (hence the name REO). The company made cars, trucks and buses, and was in business from 1905 to 1975 in Lansing, Michigan. Among the company’s most famous models were the REO Royale and the REO Flying Cloud.

23. Former tennis pro Michael : CHANG
Michael Chang is a former American professional tennis player, best remembered for his win at the 1989 French Open at the age of 17 years.

24. Des Moines native : IOWAN
The city of Des Moines is the capital of Iowa, and takes its name from the Des Moines River. The river in turn takes its name from the French “Riviere des Moines” meaning “River of the Monks”. It looks like there isn’t any “monkish” connection to the city’s name per se. “Des Moines” was just the name given by French traders who corrupted “Moingona”, the name of a group of Illinois Native Americans who lived by the river. However, others do contend that French Trappist monks, who lived a full 200 miles from the river, somehow influenced the name.

30. Poker pot : KITTY
The “pot” in a card game has been referred to as the kitty since the 1880s. It’s not certain how the name “kitty” evolved but possibly it came from “kit”, the necessary equipment for the game.

36. Jewish turnover : KNISH
A knish is a snack food from Germany and Eastern Europe made popular in the US by Jewish immigrants. A knish has a filling often made of mashed potato and ground meat, covered by a dough that is baked or fried.

37. 4-Down skewered meat dish : SATAY
The dish known as “satay” originated in Java, Indonesia and is marinated pieces of meat served on a skewer in a sauce, often a spicy peanut sauce.

47. ___ monkey : RHESUS
The Rhesus macaque is also known as the Rhesus monkey. As it is widely available and is close to humans anatomically and physically, the Rhesus macaque has been used in scientific research for decades. The Rhesus monkey was used in the development of rabies, smallpox and polio vaccines, and it also gave its name to the Rhesus factor that is used in blood-typing. It was also Rhesus monkeys that were launched into space by the US and Soviet space programs. Humans and macaques share about 93% of their DNA and had a common ancestor about 25 million years ago.

55. Vientiane’s land : LAOS
Vientiane is the capital city of Laos, situated on the famous Mekong River. The city was originally called the “city of sandalwood” by Buddhist monks, naming after the valued trees that grew in the area. The French took the Pali words for “city of sandalwood” and rewrote it as the French-sounding “Vientiane”.